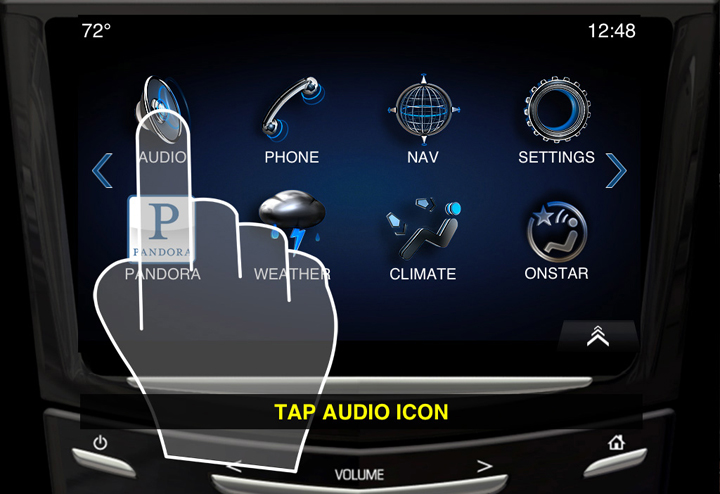 This Cadillac User Experience app enables shoppers to “test drive” the system on an iPad.

In 2009, I wrote a piece called The Five Best Connected Auto Brands to highlight the car companies that were at the forefront of in-vehicle connectivity.

Three years isn’t necessarily a long time in the automotive industry, but it is a lifetime when it comes to technology. We are seeing an explosion in the development and implementation of in-vehicle “infotainment” systems. With the number of smartphones exceeding that of “feature” (read: dumb) phones, it’s only natural for carmakers to want to integrate them into their products.

Recent developments in vehicle smartphone integration are the perfect impetus for revisiting this list. First, however, a couple notes are in order. I didn’t make as many changes here as I thought. Three of the five companies who earned a “Best Connected” distinction in 2009 are returning in 2012.

Let me briefly touch on the two companies that lost their spots.

Ford
Ford was a pioneer of vehicle infotainment. The first iterations of its Sync voice-control system were brilliant in their simplicity and functionality. Then MyFord Touch happened. Slow, buggy, and unattractive, the system was just plain annoying to use. Things have improved somewhat, but in the end, Ford was a bit too ambitious. They pushed too hard, too fast, and it has come back to bite them. When your dealers need to host clinics to show people how to use your infotainment system, something has gone horribly wrong.

Infiniti
Ford pushed infotainment too much, but Infiniti is off the list for the opposite reason: stagnation. Nissan’s luxury brand has been slow to roll out more advanced connectivity and infotainment features. The company is taking a step in the right direction with its new Infiniti Connection services, but it still has plenty of work to do.

One final note: Some of the services described here will require a monthly or annual subscription fee. Check with the manufacturer for more information and pricing.

Now on to the winners. We’re counting down from fifth place to first.

5) Kia
Ed, you removed Infiniti from this list for “stagnation,” so why in the world is Kia still on it? To that I answer: Kia is keeping its head down and focused while not trying to fix what isn’t broken. Kia’s UVO (Your Voice) infotainment is kind of what Ford Sync used to be: an advanced voice-recognition system, wrapped in an easy-to-use package that simply works. That’s not to say there won’t be more happening. The company is planning to gradually build on it with the upcoming UVO eServices, which can provide crash notification and vehicle diagnostic and information services. A new Park Assist function can aid drivers who forget where their car is parked. Prior to leaving their car, they can take pictures of the area, write a reminder note, and even e-mail the location. The plan is to make all this available within a single smartphone app. UVO eServices is still in development, and I look forward to trying it. Despite lacking some of the features of other systems, the current UVO setup works just fine. Its simplicity and overall competence is enough to keep it on this list.

4) BMW
BMW is performing upgrades to its iDrive control system and ConnectedDrive app/infotainment suite. Faster back-end hardware makes iDrive operate much more smoothly. Bluetooth pairing is simpler, and the experience with the available BMW Apps is cleaner and more refined. The “Last Mile” feature provides walking directions from where to park your car to your ultimate destination, which is handy if you’re in an unfamiliar locale. “Wiki Local” provides access to Wikipedia articles about your current location or a navigation destination of your choice. The changes might not seem evolutionary, but they are enough to keep BMW in the top five.

3) Mercedes-Benz
Mercedes’ new mbrace2 telematics suite earns this German luxury brand the bronze medal. Among the more interesting features of mbrace2 are the ability to see pictures of a planned destination through Google Local Search; directions and reviews courtesy of Yelp; and the ability to establish “driving zones” that notify owners if their kids or an unscrupulous valet take their car out of pre-designated boundaries. The included concierge service connects you to a live operator who can assist with booking flights, hotels, and rental cars. They can make restaurant reservations and even get tickets to shows and sporting events. Talk about being well connected.

2) Toyota/Lexus
A newcomer to this top five, Toyota earns the silver for its Entune multimedia and navigation suite. By extension, I’m including Lexus for its similar Enform system. Entune offers buyers access to a variety of built-in apps and services. The standard setup includes Microsoft Bing search, Pandora Internet Radio, fuel prices, stock reports, sports scores, traffic, and weather. The more advanced systems (Enform included) add restaurant information and reservations via Opentable, iHeartRadio streaming audio, and access to Movietickets.com. Toyota has done a fine job integrating all these features into a single access point in its vehicles.

1) General Motors
Were I to break down General Motors into its individual divisions for this list, they would occupy at least three of the five spots (Buick/GMC, Cadillac, and Chevrolet). GM is leading the way in vehicle connectivity with systems that are feature-packed yet easy to use. Cadillac User Experience (CUE), Buick/GMC IntelliLink, and Chevrolet MyLink have a similar feature set, with support for streaming audio via the Pandora and Stitcher services. The included “Color Touch Radio” on certain Buicks, Chevrolets, and GMCs makes using these features as easy as operating your preferred tablet.

CUE in particular is redefining the luxury-car climate/audio interface. While you can easily learn CUE on your own, GM offers helpful interactive tutorials via an Apple iPad app. Further, technology experts are available at Cadillac dealerships and over the phone to answer any questions buyers might have.

GM’s infotainment systems might not be as robust from a features standpoint as some of the other brands mentioned here, but what’s on offer is flexible, easy to use, and available across a wide range of products, from the entry-level Chevrolet Spark to the high-end Cadillac XTS. That’s why GM takes home the gold.