Truckin’ in Silverados to the MLB All-Star Game

As the official vehicle of Major League Baseball, Chevrolet is gearing up for an All-Star celebration in Kansas City. During MLB All-Star FanFest (this Friday through next Tuesday, the day of the game), fans can drive Camaros, all-new Malibu sedans, and a Corvette on a closed-course test track at Kauffman Stadium. In addition, former and current MLB All-Stars will ride to the ballpark in 75 Chevrolet Silverados and Chevrolet Camaro convertibles during the MLB All-Star Red Carpet Show on Tuesday afternoon. Finally, the winner of the game’s MVP Award will win a Camaro convertible. 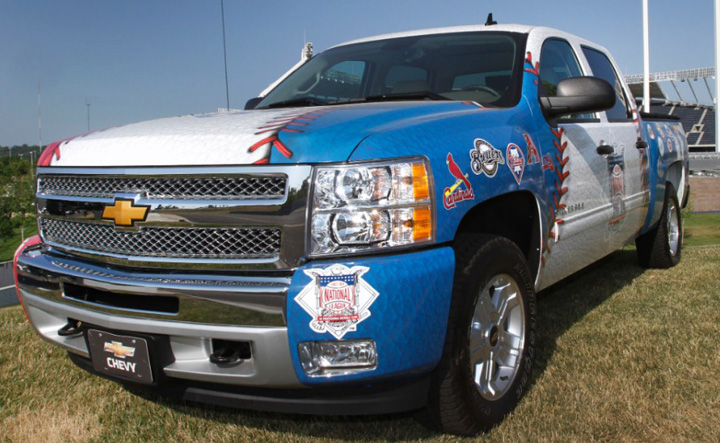 As part of the festivities, Chevy painted two Silverados in baseball motifs. The red truck features American League team logos, and the blue truck brims with the logos of NL teams.

We prefer the look of the red AL truck over its sky-blue rival—and we’re also predicting an American League victory. The AL won 12 straight All-Star Games (before losing the last two) and has topped the NL in interleague play for nine straight seasons, going 142–110 this year.