Volkswagen gave attendees of the 2013 Detroit Auto Show a look at two concept cars that might very well see production in the near future.

Headlining its press conference was the CrossBlue SUV concept. If it were to see production (which we think is highly likely at this point), it would rival the GMC Acadia, Honda Pilot, and Mazda CX-9 among 3-row, 7-passenger “large-midsize” crossovers. Though physically larger than the premium-midsize Volkswagen Touareg, a vehicle based on the CrossBlue would be less expensive.

The concept vehicle is a plug-in hybrid. That is not unusual, but the CrossBlue stands out because its internal combustion engine is actually a diesel. The motor is an updated version of Volkswagen’s 2.0-liter 4-cylinder “TDI clean diesel.” When paired with the included battery-powered electric motor, combined output is 305 horsepower and 516 pound-feet of torque. VW claims 0-60 mph acceleration in just 7.2 seconds. The CrossBlue is capable of running solely on battery power for up to 14 miles at speeds up to 75 mph. VW projects fuel economy of 89 MPGe (miles per gallon equivalent) with the electric and diesel engines working in tandem. The internal combustion engine alone could achieve 33 mpg city/37 mpg highway, according to the company.

While a production version of the CrossBlue would seat up to 7 passengers, the concept shown here has 6 individual positions. The 3rd row’s stadium-style arrangement means those seated back there would have a slightly elevated view, but VW claims there’s no compromise in terms of headroom. Both 2nd- and 3rd-row occupants have their own individual climate controls. A pair of Apple iPad Mini devices mounted in the front-seat headrests serve as the onboard entertainment.

Volkswagen has not announced any production plans as yet, but we would be shocked if we didn’t see some sort of 3-row crossover from them sometime in the next 12 to 24 months. 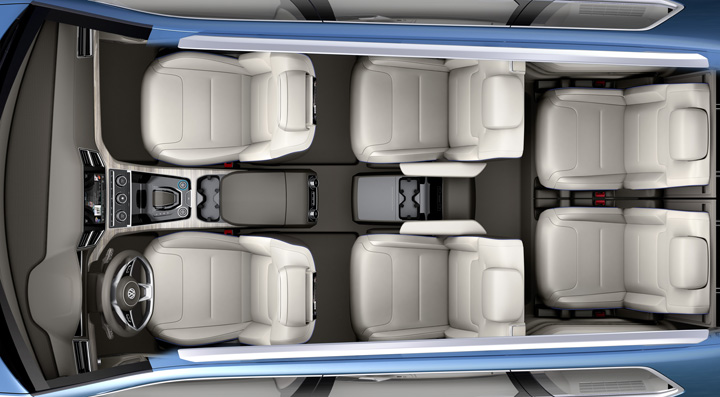 Meanwhile, VW’s Passat has been winning over the hearts and minds of the press and public. It’s a favorite here at Consumer Guide, earning a Best Buy honor in our midsize-car category. The company is looking at giving this sedan a bit of a harder edge, and as such, presents the Passat Performance Concept for consideration.

On its face, this car doesn’t look terribly different from your run-of-the-mill Passat, save for the slick bi-xenon headlights, LED taillights, and 19-inch “Luxor” wheels, all features that look like they came straight off an Audi A8. What makes the Performance Concept special, at least for North American audiences, is what’s under the hood. The car is powered by a 250-horsepower 1.8-liter turbocharged 4-cylinder engine mated to a 6-speed automatic transmission. Derivatives of this drivetrain are available in Euorpean- and Asian-market Passats, though it should be noted that these cars are unrelated to the ones offered in North America. A lowered sport suspension and unique steering ratios round out the concept’s performance credentials.

VW called the Passat Performance Concept a “sneak-peek [sic] at an upcoming sport sedan,” so we have to believe a version of this car will see the light of day in North America. Exactly what form it will take and when it would reach dealers is still up in the air.

CG Says: Volkswagen is one of the last mainstream automotive brands to not offer any sort of 7-passenger crossover. It’s pretty much a foregone conclusion that will change very soon. The company’s Chattanooga, Tennessee, factory isn’t designed to just build Passats, after all. Don’t expect the sophisticated plug-in diesel/electric drivetrain to be available, at least from the outset. At the same time, we would be shocked if VW didn’t offer a CrossBlue-based crossover with some kind of diesel engine. That would make this vehicle unique in the segment, provided Mazda doesn’t pull a rabbit out of its hat and offer its excellent SKYACTIV diesel engine available on its 7-seat CX-9 crossover.

The Passat Performance Concept is a great idea for bringing some spice to this car’s lineup. The look is bold without being over the top. Based on the wording of a VW press release, it looks like some form of this car will become a reality. When it does come to pass, we expect it to take on the brand’s R-Line nomenclature.