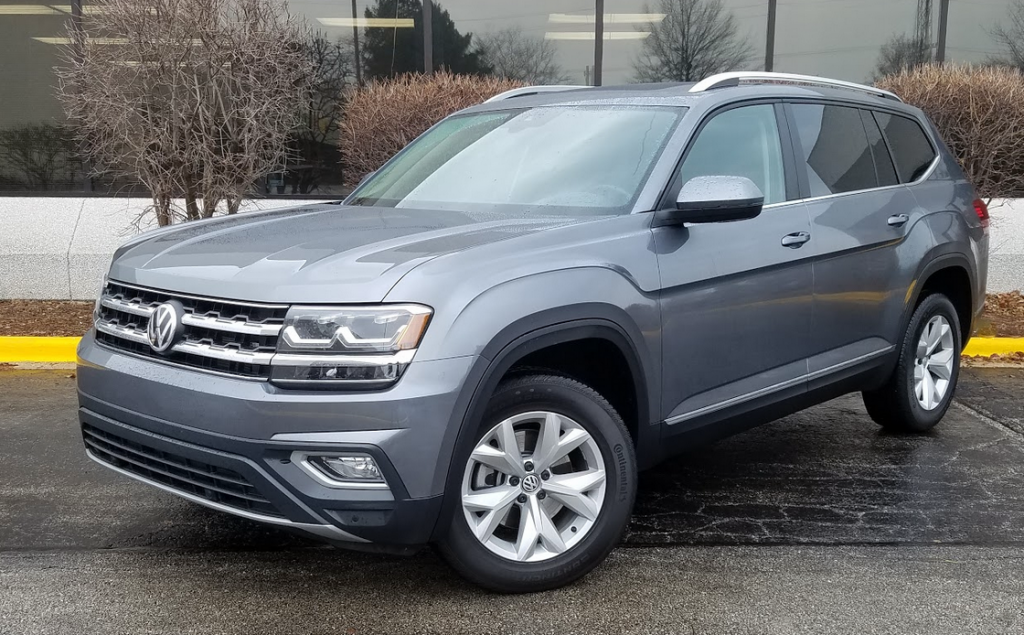 The great: Cavernous interior provides ample space for both passengers and cargo

The good: Pleasant interior materials, good driving personality for such a large vehicle

The not so good: Plus-sized dimensions complicate close-quarters parking

After getting a taste of Volkswagen’s new Atlas midsize crossover SUV, it’s pretty clear what the recipe for it was. Start with a double shot of room, add a dash of V6 vroom, garnish with features, and serve straight up or—with 4MOTION all-wheel drive—over ice. 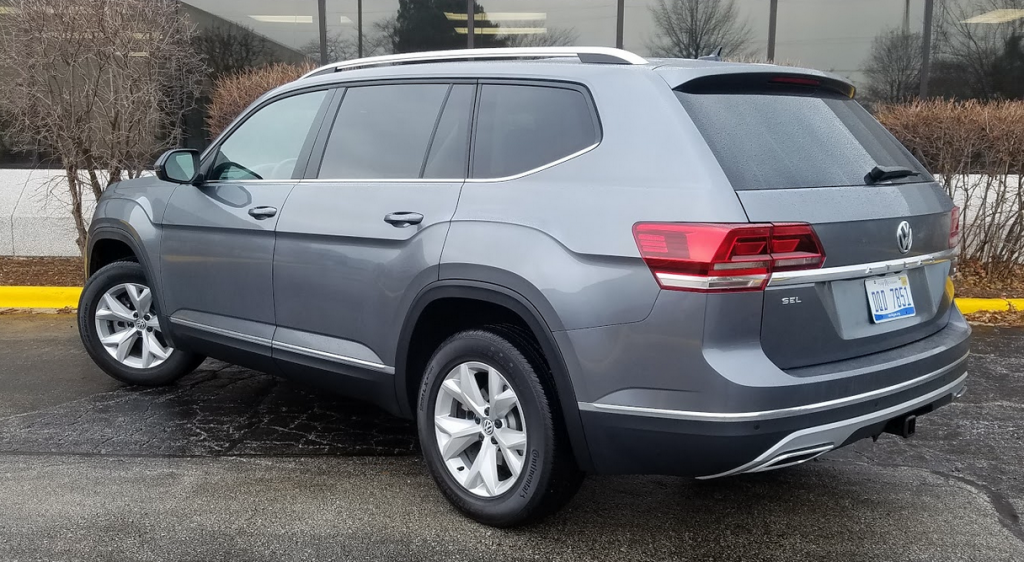 In addition to its spacious cabin, the Atlas’s large door openings and sensible step-in height make entry and exit a breeze for most occupants. A bodyside character line that swoops over the wheel openings is a unusual styling touch.

The three-row Atlas, with seating for up to seven passengers, is one of the largest vehicles VW has ever sold in the U.S. It is larger than most every rival in the class, and it’s almost 10 inches longer than Volkswagen’s other midsize SUV, the pricey, upscale two-row Touareg. The big dimensions aren’t just for show, however. Interior room is truly abundant, with broad-shouldered seating space and excellent headroom, particularly in the front and middle rows. Three adults can fit across the middle-row seat bench seat (though individual captain’s chairs that restrict seating to six people are available.) 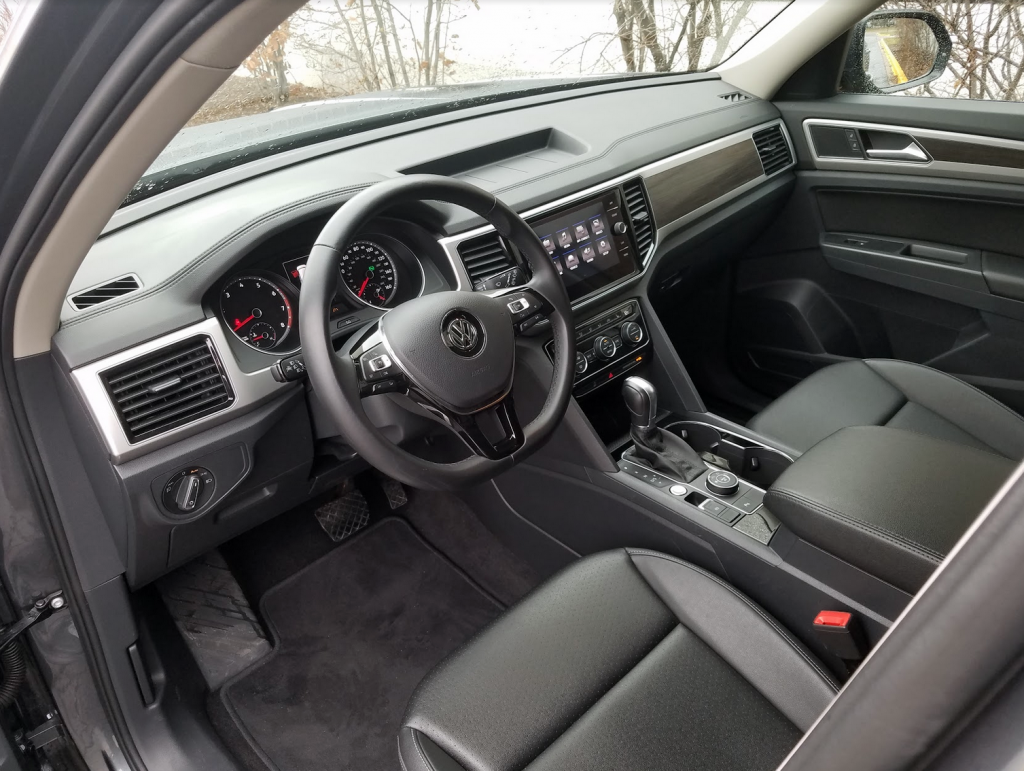 Even better yet, the Atlas’s third-row seat isn’t solely the preserve of the small fry. Seat level is high enough to be acceptable for grown-ups, and sub-6-footers will have juuuust enough upright legroom to sit there. They’ll have to be smaller adults, too, if they hope to enter and exit easily. Second-row seats tilt and track forward a bit to provide a little help getting to and from the back row.

Cargo handling also benefits from the interior layout. There’s good room with all seats up, plus some underfloor storage and side pockets for incidentals. Each half of the 50/50-split third-row seats drops with the pull of a cord to form a flat load floor, and with the second row also down, there is 96.8 cubic feet of cargo-hauling area.

Consumer Guide®’s test vehicle, an SEL with all-wheel drive, came with the 3.6-liter V6 that was the sole engine choice when the Atlas was launched. A 235-horsepower turbocharged 2.0-liter four was to follow. Both engines are paired with an 8-speed automatic transmission. The narrow-angle VW V6 generates 276 horsepower and 266 lb-ft of torque, and it gives the Atlas very lively pickup from a standing start or when passing on the highway. In this driver’s experience, the transmission made a few curious stumbles in his first moments behind the wheel, but then it got its act together and performed well through the remainder of his 127-mile run.

That power has a cost, and it will be paid at the gas pump. EPA fuel-mileage estimates for the model CG tested are 17 mpg in the city, 23 on the highway, and 19 combined. This reviewer recorded 20.26 mpg in a drive that included 53 percent city-type operation—pretty good against the EPA figures but not great overall.

The Atlas is smooth riding and a fairly easy handler. If its size has any drawback, it will be that it’s not as easy to maneuver in close-quarters situations like parking. 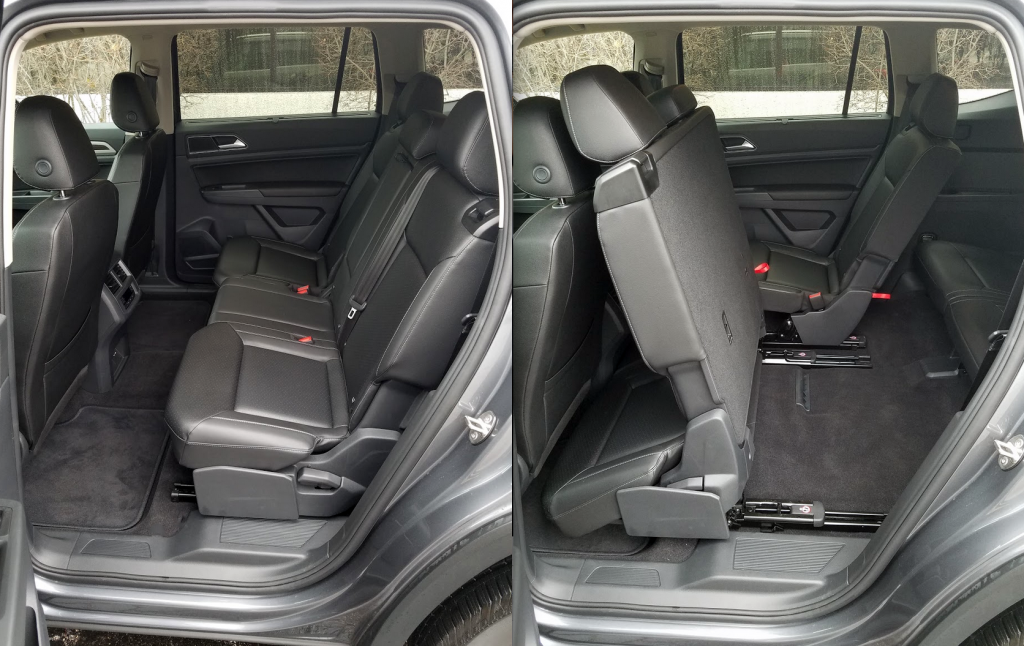 Thanks in part to the Atlas’s lengthy wheelbase, second-row legroom is generous even for tall passengers. The seats are adjustable fore and aft a full 7.7 inches and slide forward–even with a car seat installed–to ease third-row access.

The Atlas offers outstanding cargo room–there’s 20.6 cubic feet of space behind the third row (enough for a grocery run for the whole soccer team), and that grows to 55.5 cu. ft. behind the second row and 96.8 cu. ft behind the first row. Plus, all the seats fold flat to create a level floor that makes it easy to move large items around.

With all this at their disposal, Atlas SEL occupants enjoy a comfortable and convenient driving experience. There’s good support from the leatherette-clad seats, and the pleasing look and feel of lots of soft-touch material on the dash and door panels. Personal-item storage is accommodated via a large glove box, a covered console cubby, pockets (albeit somewhat small) in all doors, and pouches on the backs of the front seats. Cup holders are found in the console, central armrest in the middle-row seat, and in the sidewalls on either side of the third-row seat. Driver vision is very good.

The audio system offers straightforward programming and easy use. The climate system relies on direct, no-nonsense dials for temperature and fan-speed settings. Middle-row passengers can avail themselves of their own climate controls, plus a USB port and 110-volt electrical socket, all built into the back of the console.

An optionless V6 SEL with all-wheel drive like the Platinum Gray Metallic job that CG sampled comes to $43,615 with delivery. With starting prices from $30,500 for a 4-cylinder front-drive S to $48,490 for the SEL Premium with V6 and AWD, the well-executed Atlas is priced in the heart of the midsize-SUV field. We imagine shoppers in this class will drink to that.

The new-for-2018 Volkswagen Atlas enters the midsize-SUV market as an attractive alternative to established rivals such as the Chevrolet Traverse, Honda Pilot, and Toyota Highlander.