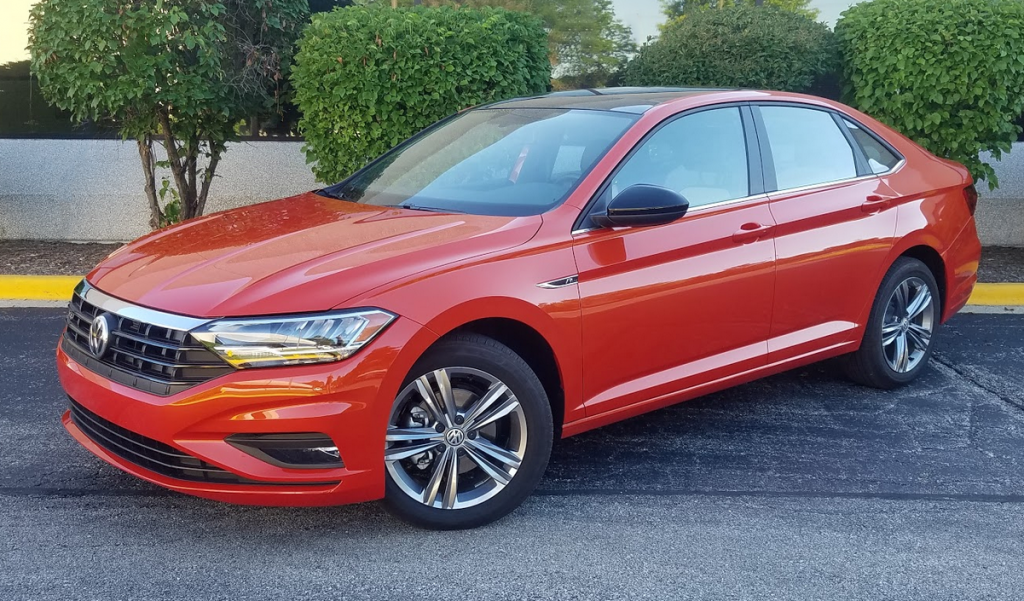 The not so good: Ride quality, not as sporty feeling as previous generations of the model

You can’t change things by keeping them the same but you’ve got to take care about what you do alter. That’s the challenge that Volkswagen had to meet when thoroughly redoing its Jetta compact sedan for 2019. 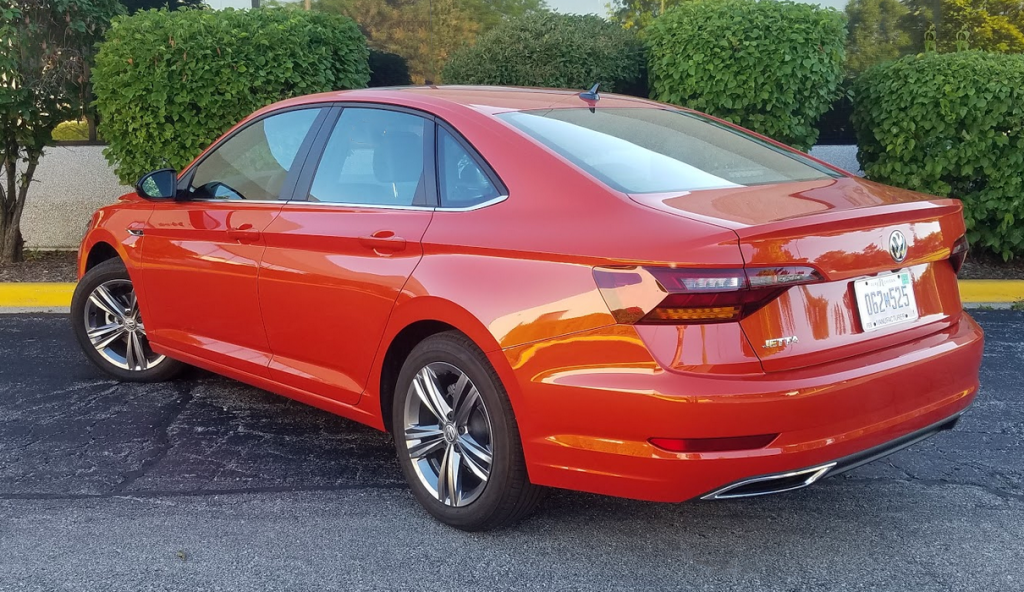 VW shifted the Jetta to a platform already in wide use throughout its global product mix, which helps keep costs down. It led to a car that is slightly wider, taller, and longer than previous (wheelbase grows from 104.4 inches to 105.7). Overall interior space increases, and there are some added features. However, some of the ride and handling refinement that made earlier Jettas endearing seems to have been diminished, and there’s just one engine available where there used to be three.

The new Jetta features better-than-class-average room and comfort, as well as a tidy and intuitive control layout.

The ’19 Jetta comes in a choice of five models, and Consumer Guide® tested the one set squarely in the middle of the lineup, the R-Line. This sport-themed car starts at $23,845 with delivery. The test car came with Habanero Orange metallic paint as its only option and stickered at $24,140. 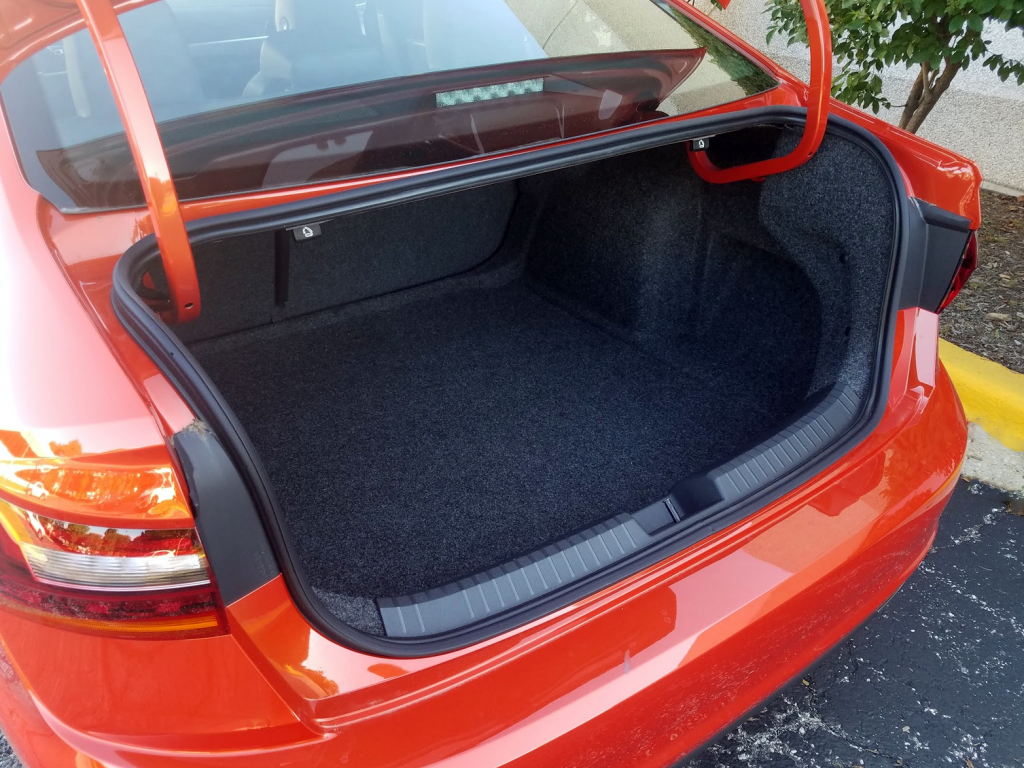 Jetta’s trunk is slightly less spacious for 2019, but is still generously roomy.

The engine essentially is the previous Jetta’s base powerplant, though output has been dialed back to 147 horsepower—a loss of three ponies. A whiff of turbo lag will kick off a standing start, but with all 184 lb-ft of torque available by just 1400 rpm, power ramps up in a linear fashion and moves the Jetta along quite happily. Transmission shifts are perceptible but not harsh, and kickdown for passing comes quickly. The powerteam carries an EPA rating of 30 mpg in the city, 40 mpg on the highway, and 34 combined. This reviewer notched 31.0 mpg after driving 226 miles with 50 percent city-style operation. A button-selected “ECO” mode and a standard stop/start feature are included to help squeeze fuel economy from the Jetta. 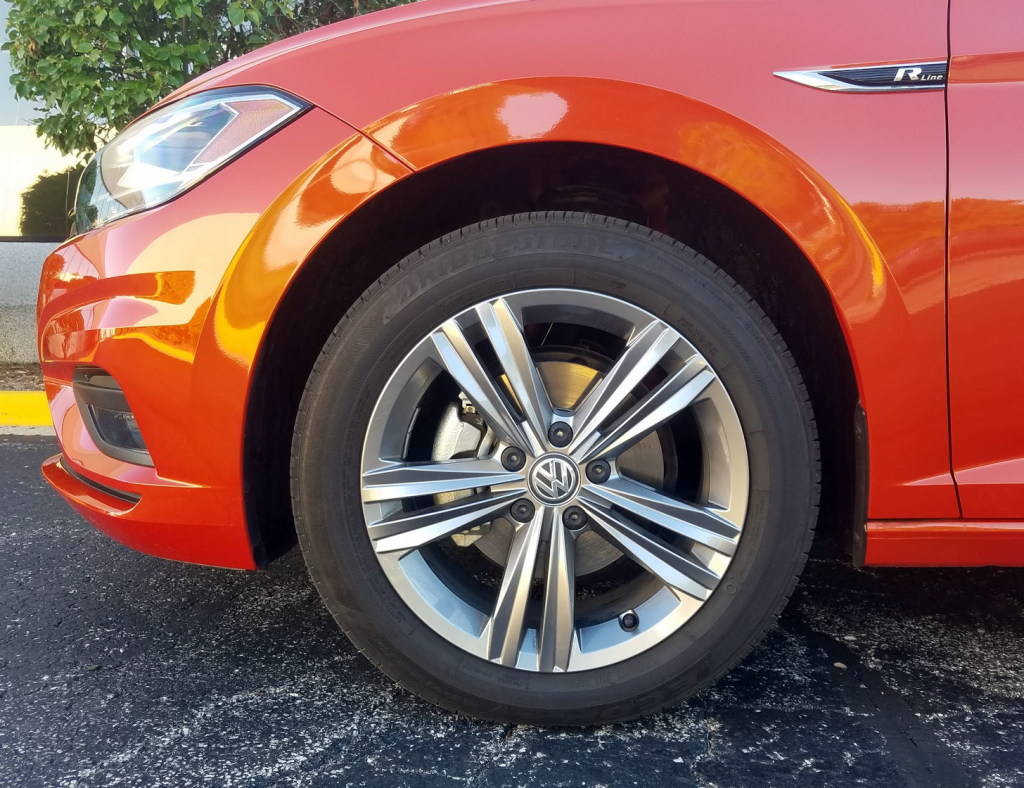 One aspect of the new car that didn’t necessarily improve—indeed, it might have lost something—is ride quality. After several years with an independent rear suspension, the Jetta reverts to a simpler twist-beam rear axle for 2019. You’ll feel jolts that you might not have in the 2018 car. The variable-assist electromechanical power steering leaves a light, almost unsubstantial feel in the driver’s hands. (A “Sport” driving mode standard on the higher-priced Jettas is supposed to tweak throttle and steering performance.) When this driver got into the car soon after a late-afternoon sprinkle, the all-season tires were kind of quick to spin in standing starts on damp pavement.

On the other side of the coin, it’s hard to find fault with the redone control layout. The audio system sprouts easy-to-reach volume and tuning knobs, plus six function buttons along the sides. Working through the screen is direct as well, and it is tilted toward the driver for added ease of use. Convenient rotary dials for temperature and fan speed, with one-tap buttons for mode selections, manage climate settings. Driving controls are bright and legible.

The seats—done with Titan Black bolsters and perforated Storm Gray inserts—are attractive and pretty comfortable. As always, manual seat adjustment for the driver includes a height setting. The dash and the top and center of the front doors wear compressible material, but the rear doors lack soft-touch surfaces in these areas. Cabin storage is provided via a big glove box, a narrow but deep console box, an open bin with a USB port under the climate controls, pockets with bottle holders in all four doors, and a pouch on the back of the front passenger seat. Exposed cup holders rest in the console and in the pull-down rear armrest.

There’s a roomy feeling in the cabin, and even 6-footers may find acceptable legroom when they ride in the back seat. A middle-rear passenger will have to straddle a tall floor hump but three children—or even three slightly built adults—probably could fit there. The redesign shaved two cubic feet of cargo space from the trunk, but the Jetta still has a generous small-car trunk that’s configured to be quite cargo-friendly. That said, exposed gooseneck trunklid hinges extend into the load space, and the 60/40-split rear seats settle about four inches above the trunk floor when they’re retracted. Plus, a bulkhead behind the seats narrows the pass-through from the trunk area.

For the time being, the R-Line is as sporty as the seventh-generation Jetta (is that a Jettaration?) gets. However, the return of a GLI version with more than 200 horsepower on tap is expected to be a 2020 vision.

In ways that are difficult to quantify, the new Jetta feels just a little less German than previous generations of the model. Folks looking for that old-school European feel may find the VW Golf more to their liking.