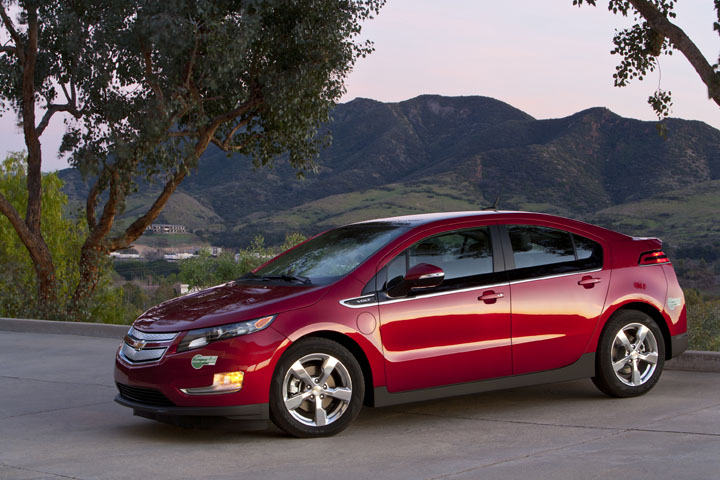 The Chevy Volt is in the news again. This time it’s because the much-maligned “extended-range electric vehicle” is not catching fire, either after a crash (good!) or with the buying public (bad!).

Through the first two months of 2012, General Motors sold less than 2,000 of the $40,000-plus compact hatchbacks. To meet the company’s sales goal, dealerships would have to move nearly 4,400 Volts per month from here on out. Rightly assuming that’s probably not going to happen, GM is idling the Detroit-Hamtramck, Michigan, assembly plant where the car is built. In the process, 1,300 employees will be temporarily laid off.

What was seen as a potential game changer for automotive transportation and a rebirth of American innovation and manufacturing has become something of a pariah. It’s really too bad because there is some awfully impressive technology at work here. The fusion of gas engine and electric propulsion is almost completely seamless. Power comes on easily and smoothly. Chevy’s smartphone app, while sometimes slow to react, works as advertised.

Still, none of these things ultimately redeem the Volt in my eyes. Now I can sense our left-wing readers getting the pitchforks ready (Why do you hate the earth, unions, Obama, et al?) as well as something equally inane from those on the other end of the political spectrum (Gubmint Motors, LOL). Spare me your political ideology and indignation. My disdain for the Volt comes down to one simple thing: I just don’t like driving it.

2014 Cadillac ELR Turns Up the Volt-age on Luxury Coupes

Volt weighs 3,781 pounds, and it feels every bit that heavy. Despite a rather modest height of 56.3 inches, the car handles like it’s on stilts. The steering is more numb than a hockey player’s mouth before dental surgery. The suspension crashes like a drunken frat boy onto a futon. The haptic control interface operates on its schedule, not yours. The arrangement of numbers on a bingo card makes more sense than the layout of “virtual” buttons that govern the Volt’s audio, climate, and navigation systems.

Chevy’s real game changer for 2012 is the Sonic. I certainly didn’t have high expectations for whatever came along to replace the Aveo, but I was sufficiently blown away. It’s a ton of fun to drive, the hatchback is eminently practical, and it costs half as much as a Volt. Even with gas prices as high as they are, you could buy an awful lot of the stuff for a Sonic before you’d match the price of a Volt plus the home charging station. (Yes, you can charge the car on a standard household outlet, but that takes much longer). The final kicker is that Chevy recommends expensive premium-grade gasoline to power the tiny 1.4-liter 4-cylinder “generator”; the Sonic, of course, gets by on good ’ol regular.

I fully understand and appreciate the technology and engineering that went into making the Volt’s battery/gasoline tandem work. It’s just that the car it was built around isn’t up to scratch. Put the Volt’s propulsion system into a Nissan Leaf, and you’d have an alternative-fuel juggernaut.