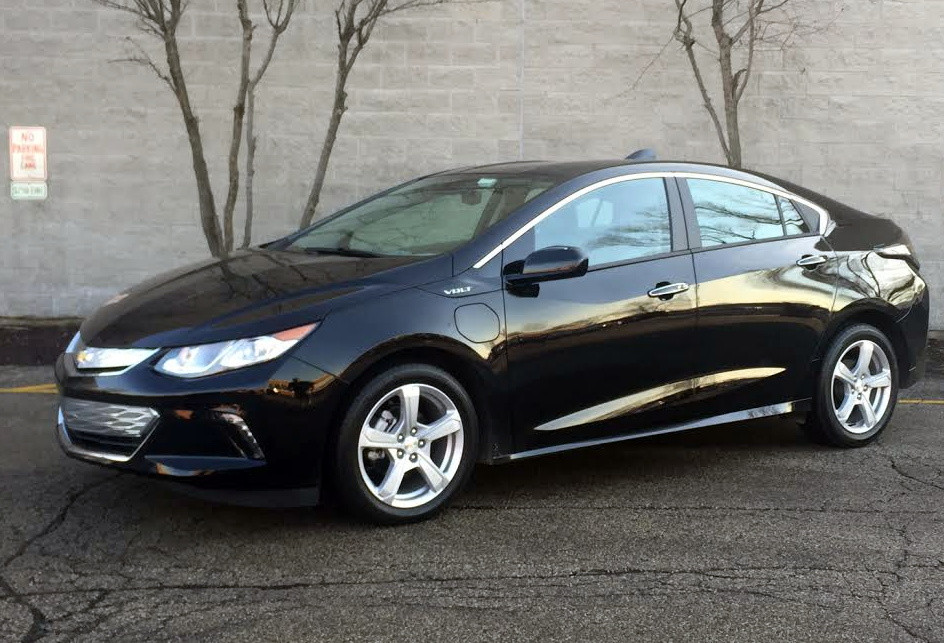 The not so good: Rear-seat passenger space

Gasoline-averse shoppers who check out the Chevrolet Volt may be in for a shock. (Sorry—couldn’t resist.) For 2016 Chevy’s extended-range electric sedan is completely redesigned, with sleeker looks inside and out, greater full-electric range, and two equipment levels from which to choose. 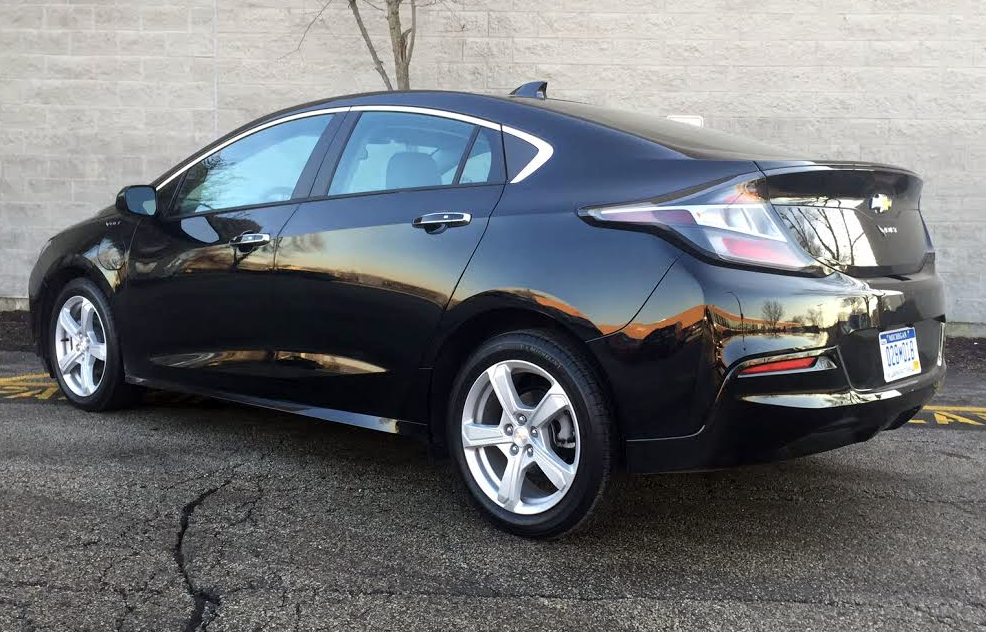 For good measure it’s gotten a bit more affordable, too. Consumer Guide® tested the new base LT model that started at $33,650, and topped out at $34,475 with delivery and options including a heated front seats/steering wheel/mirrors package, and a folding front license-plate bracket. At that latter figure it was only $290 more than the starting price of CG’s previous Volt test car, a 2014 first-generation job that came in a single trim level. (The ’16 Premier model includes more standard tech and luxury items at a $4350 premium.) 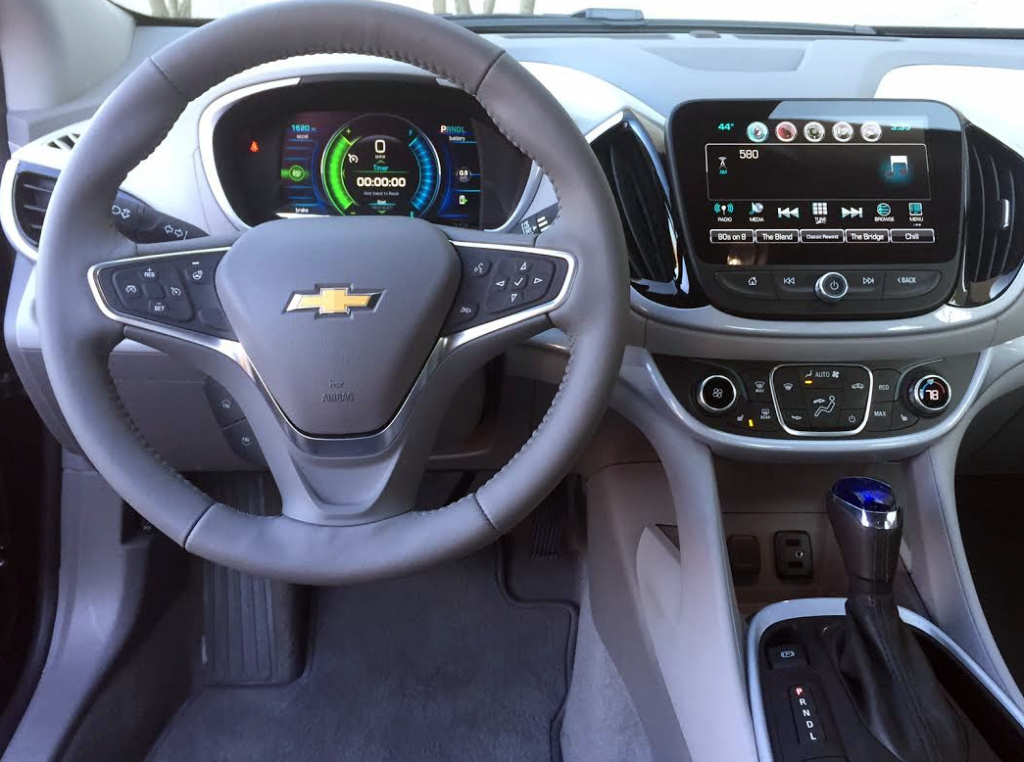 Where the original Volt was rated at 38 miles of all-electric operation before the gas engine would switch on to support the electric-drive system, the gen-II system has a claimed 53-mile range, for a potential of 420 total with a full tank of gas. Chevy has increased charge capacity in the lithium-ion battery pack, and says a new two-motor drive unit operates more efficiently than its predecessor. It has also trimmed the weights of the battery and motor for a savings of about 120 pounds.

Of course, weather conditions have a lot of influence on charge capacity and range. During our test, February Chicago temperatures a little either side of the freezing mark extracted their toll. On a couple of full charges, this driver never saw more than 46 miles as a projected electric range. Range predictions did prove to be fairly accurate, though. Four separate charges had these results: 33 miles projected/36.1 miles actual, 44 projected/46.4 actual, 46 projected/44.5 actual, and 23 projected/23.1 actual. Note that the one stint that slightly missed expectations involved the most highway driving—60 percent—and some use of lights and heat.

In four days with the car, this tester drove 201 miles, 55 percent of it under city-type conditions. The new 1.5-liter gas engine was in use for 50.4 of those miles, and required 1.246 gallons to top off the tank for total-trip gas mileage of 160.91 mpg. Calculating fuel use solely during gas-engine operation came to 40.45 mpg. EPA figures for the new Volt are 106 MPGe in electric mode, while the gas motor is rated at 42 mpg when operating. 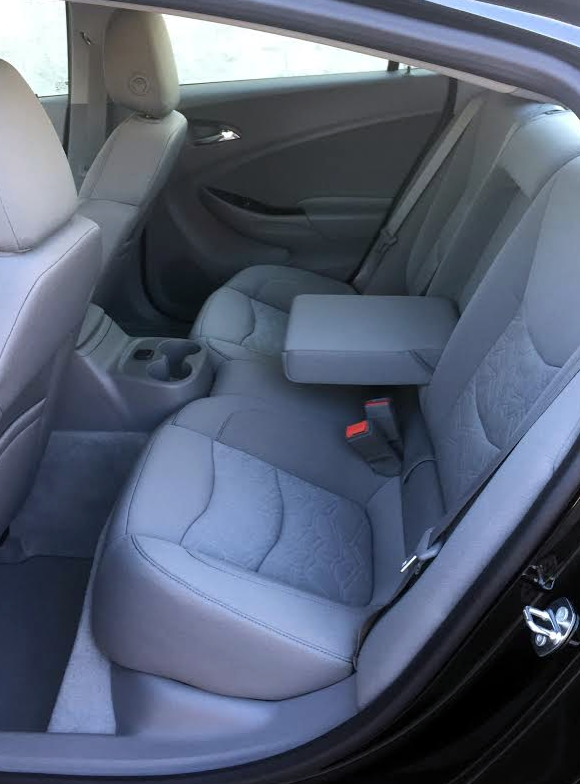 Despite Chevrolet’s claim of Volt being a 5-passenger vehicle, the rear center position is really only suitable for very short trips or emergencies.

Chevrolet says a depleted Volt battery can be fully charged in 4.5 hours on a “level-2” 240-volt charger, or 13 hours (at 12 amps) on household 120-volt service—for which a special charger cord is included. When this driver plugged in at home the car calculated a charge time of almost 20 hours for a full charge at the default eight-amp draw. A second overnight charge that lasted 9.25 hours got the battery to half capacity. New for the year is “location-based” charging capability, which allows owners to program charges for cheaper off-peak hours when at home.

Once the Volt is juiced up and ready to go, performance is pretty good. The powerplant generates 294 lb-ft of quickly experienced torque, which makes the 3500-pound car feel about as lively as many small sedans with mainstream engines. Drivers can select from four drive modes: “Normal” for most conventional driving, “Sport” for quicker accelerator response, “Mountain” that conserves battery energy on steep uphill climbs, and “Hold” that switches off the battery to save charge for city driving. (For the record, this driver’s full test was in Normal mode.) The switch from EV to gas assist is utterly seamless.

Ride displayed some floaty moments, but it’s not all cushy all the time. You’ll feel some hard bumps from surface imperfections. For one thing, the only tires available are harder-riding low-rolling-resistance 215/50R17 all-season rubber.

Standard LT interior amenities include automatic air conditioning, carpeted floor mats, a leather-wrapped steering wheel on a tilt/telescoping column, and six-speaker audio with satellite radio. Connectivity features run to the Chevrolet MyLink touchscreen infotainment system, Apple CarPlay capability (with compatible smartphones), and 4G LTE Wi-Fi. The new interior design does away with the old Volt’s gloss-white “smartphone” audio/climate control surface on the console. It’s easy to program audio selections on the eight-inch screen in the center of the dash, and a few voice commands this tester issued were correctly followed on the first try. Climate controls have dials for fan speed and temperature, with buttons for other functions. Unfortunately, the system never really produced a lot of heat without really dialing the temperature up even in “Max” mode. (There’s an “Eco” climate setting, too.) 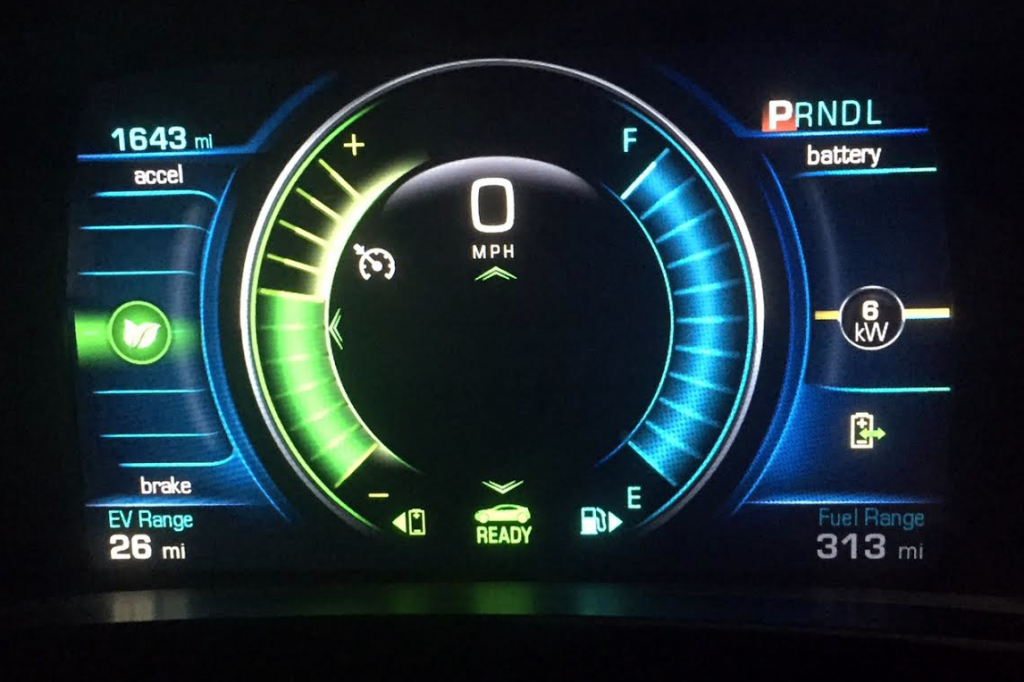 The Volt instrument panel looks a little less sci-fi than before, but tech fans will still enjoy an ample amount of EV-operation information.

LT interior materials are tidy, but not sumptuous. Cloth upholstery is standard. Soft surfaces are found on arm rests and the center of door panels. Most of the rest is unpadded plastic, but still pleasing to the eye. A new 60/40-split seat in back suggests five-passenger seating (which Chevy now claims), but with the big hump to clear the centrally located battery pack the reality is it’s still a four-passenger car. Front space is good but the rear is cramped for leg room and very tight for head room for anyone bigger than 5’10”. The low, sloped roof crimps over-the-shoulder and straight-back vision somewhat.

The Volt is still a hatchback with a sedan profile. Cargo space is pretty good under the hatch, and a cover keeps goods out of sight. Rear seats fold almost flat for plenty of additional load space if needed.

When the first-generation Volt was launched back in 2011, General Motors patiently explained that the average American commuter’s daily round trip to work and back amounted to less than 40 miles. Not coincidentally, the original Volt provided a claimed 35 miles (later upgraded to 38) of electric-only range. Thus, during a typical workweek, most Volt owners wouldn’t need to use a drop of gasoline.

Skip ahead to 2016. With a promised 53-mile range, the redesigned Volt promises to welcome a greater number of commuters into the “zero gas” club. I, alas, am not among those lucky folks, but I got pretty close.

My workday commute, including a run to the health club, comes to exactly 48 miles–a distance I matched exactly each day I spent in the new Volt. Blame cold weather and darkness for my inability to go completely gas-free. With the heat on 100 percent of the time, and the battery-draining headlights on about half the time, I managed to travel between 41 and 43 miles on each full charge of the Volt. The remaining distance was obviously covered under gasoline-engine power, a fallback that cost me about .7 gallons of gas.

The beauty of the Volt, of course, is that daily charging isn’t essential–you always have the gasoline engine to fall back on. While not charging the Volt rather defeats the purpose of owning one, it’s very comforting to know that forgetting to charge the car—or being unable to do so—will not compromise your ability to drive someplace as needed.

All that said, the new Volt is a very nice car. It rides well, it’s quicker than before, and the new “normalized” cabin allows Volt to feel more like a conventional vehicle and less like a George Lucas creation. In fact, the best thing I can say about the Volt is that it is entirely normal. It’s just a very nice car that, if kept charged, uses very little gas. 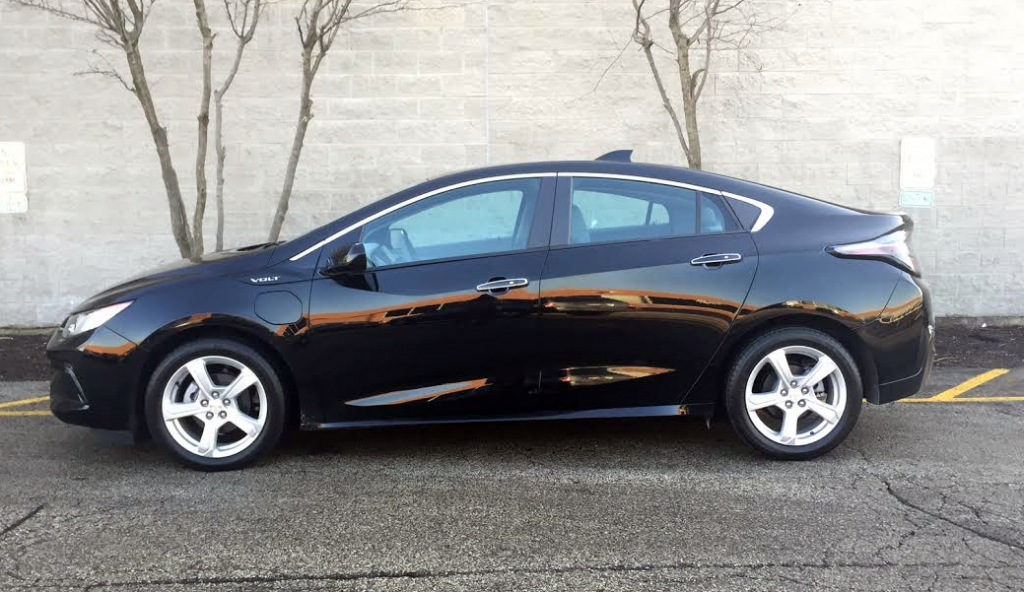 Volt remains a hatchback for 2016, though it has a slightly more sedan-like profile than its predecessor.