Will the Hyundai Accent Be the Last New Car to Offer 14-Inch Wheels?

Will wheels like this be a thing of the past soon?

I was traipsing into the office this morning when a 2012 Hyundai Accent hatchback parked in our building’s lot caused me to do a double take. Run-of-the-mill subcompacts usually don’t cause me to break stride, but . . . man, the wheels on this car looked TINY! I couldn’t help myself. I crouched down for a closer look at a sidewall: 175/70R14. Wow. Fourteen-inch wheels. I forgot those still existed!

When I got to my desk, I started poking around subcompact-car pricing. As near as I can tell, the new-for-2012 Hyundai Accent is the only subcompact (and hence, I’m pretty sure the only car period) to still offer 14-inch wheels. The Chevrolet Aveo had them too, but it has been replaced by the new Chevrolet Sonic for 2012. Every other car in the subcompact class (yes, even the tiny Smart ForTwo and the forthcoming Chevrolet Spark) offers 15s as standard equipment. Most subcompacts offer 16s as an option, and a few even offer 17s. 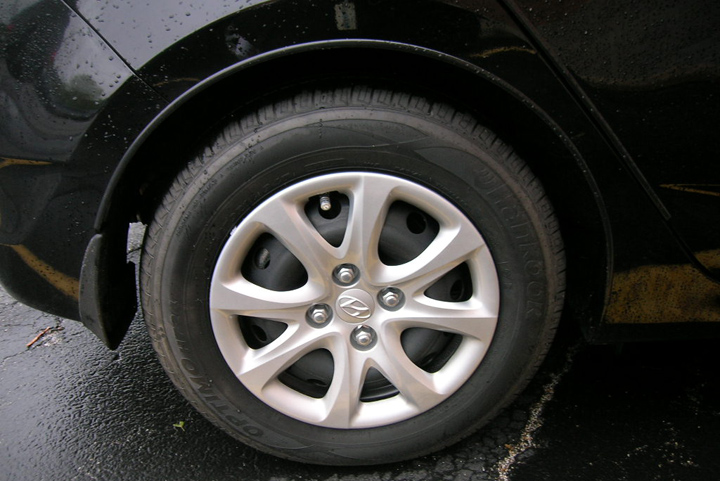 Sheesh. I flashed back to my high school days in the late Eighties, when 14s and 15s were the norm. Sixteens were plenty exotic (and mostly cost-prohibitive for young guys) back then. I remember my buddy Sean, who worked in our hometown’s main service station/tire store after school, flipping open a price list to show me how much more 16-inch tires cost over comparable 15s. (I can’t remember how much it was, but it was just enough to be a bit outside the reach of the typical after-school job income.) Seventeens were basically unobtanium; only new Corvettes had those. The most popular tire in my high school parking lot was probably the Grand Am Radial GT, since it was the cheapest white-letter tire you could get, and white-letter tires were still cool back then—at least in the Midwest.

My, how times change. Today, a Toyota Camry SE V6 rolls off the assembly line with 18-inch wheels. A Ford Taurus starts with 17s, and a Taurus SHO can be equipped with 20s. This would have blown my 17-year-old mind. My hunch is that average OEM wheel diameters won’t get much larger than they are now, but I’d be willing to bet that the 2012 Accent will turn out to be the last North American-market car to offer 14s as standard equipment. . . . They seem to be going the way of regular-cab pickups and windows that you crank up yourself.