What If…1955 Ford Crown Ranchero 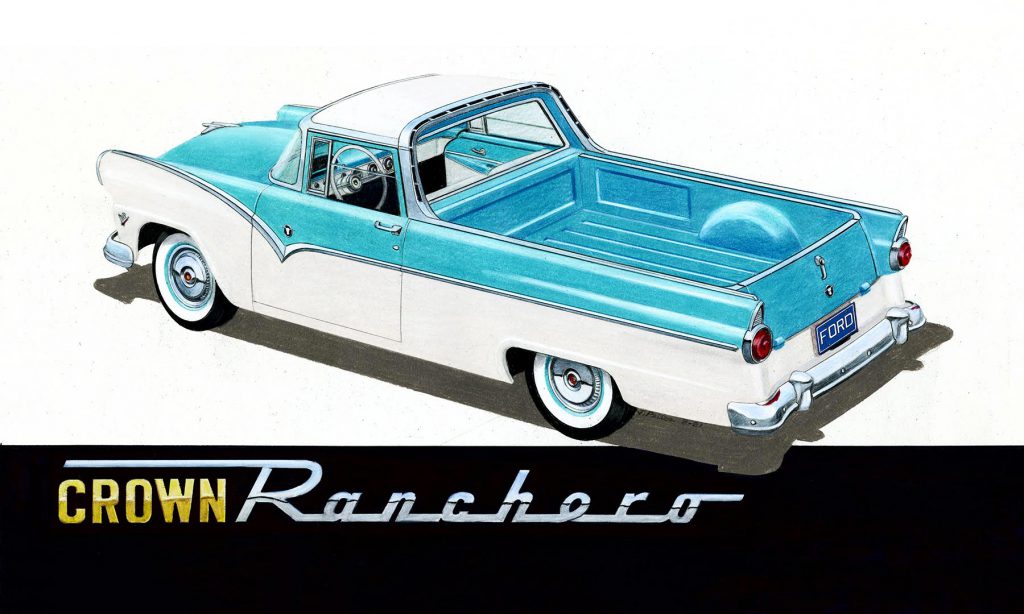 Two of Ford Motor Company’s most memorable vehicles of the Fifties were introduced within a couple years of each other. Launching for 1955 as the flagship of Ford’s dramatically restyled passenger-car line, the Crown Victoria two-door hardtop brought a new level of glamour and style to the brand. Two years later, the 1957 Ford Ranchero melded the passenger car and the pickup truck into a “best of both worlds” proposition—at least for some shoppers. 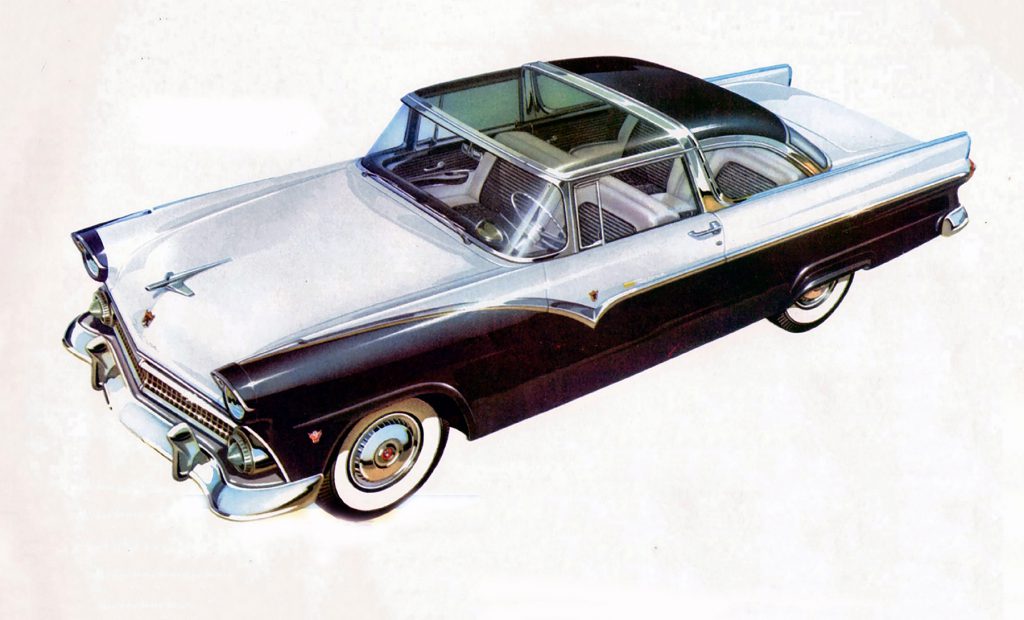 The ’55 Crown Victoria’s, ahem, crowning touch was its “tiara-top” treatment. Accenting the hardtop-style roofline was a stainless-steel band that wrapped from the base of the B-pillars across the top of the roof. Add in the flashier grille, hooded headlights, subtle tailfins, “checkmark” bodyside trim, and eye-grabbing two-tone paint colors of the 1955 Ford’s restyle—not to mention the available Plexiglas fixed sunroof—and the Crown Vic was the most dashing regular-line Ford yet.

The idea of a passenger-car-based pickup was not entirely new when the Ford Ranchero debuted for ’57—a few American automakers had previously offered vehicles that followed the same basic concept, and the car-based “ute” was already commonplace in the Australian auto market. The Ranchero, however, was arguably the best-looking, best-integrated example of the breed, and it was relatively simple and economical to produce. Like other mainstream-brand automakers, Ford had a two-door station wagon body in its passenger-car lineup, and it wasn’t a huge undertaking to shorten the roofline, section off the cab behind the driver, and install a pickup bed in the back.

What if the 1955 Chevy Had Been Built by AMC, Chrysler, Ford, or Studebaker? 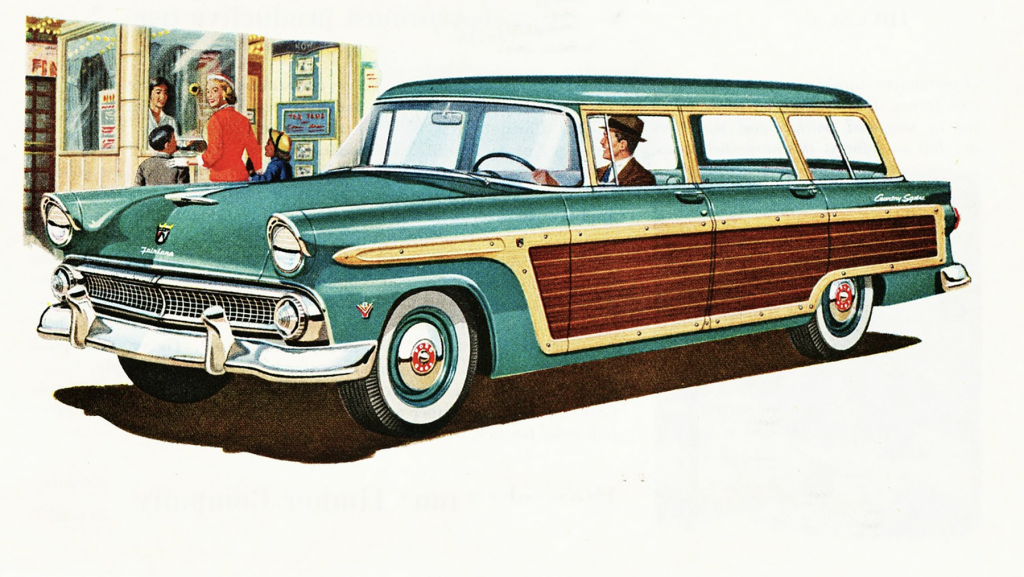 A mash-up of these two fondly remembered Fords is a tantalizing idea, and one that Collectible Automobile magazine publisher Frank Peiler couldn’t resist putting to paper. What if Ford had moved forward with the Ranchero concept a couple years earlier, and what if it had decided to produce it as a top-line model in full Crown Victoria regalia? The result might have looked just like Frank’s “Crown Ranchero” rendering shown here, resplendent in Aquatone Blue and Snowshoe White two-tone.

As Frank’s illustration shows, the Crown Victoria’s ornamental roof band is a graceful way to cap off the Crown Ranchero’s cab, though the slanted door frame at the rear would necessitate special parts not shared with station-wagon models. Ranchero “steer’s head” emblems in place of the Crown Victoria badges and an abbreviated tailgate (to line up with the two-tone paint scheme) are other subtle touches. It’s doubtful that Americans would have embraced a full-lux Ranchero in numbers sufficient to justify production, but had Ford made it, it almost certainly would have been a sought-after collectible today. “What if” indeed! 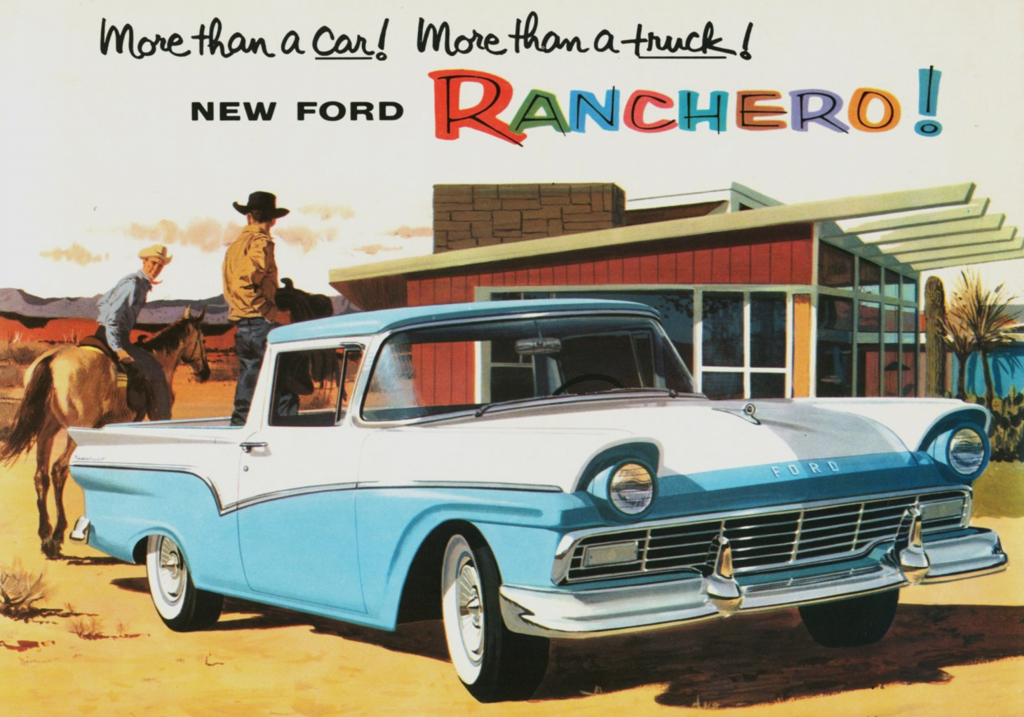 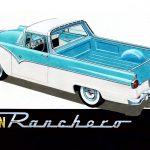 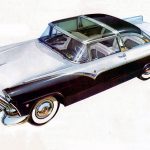 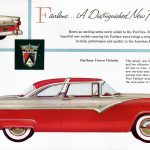 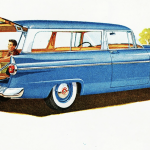 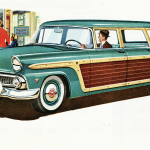 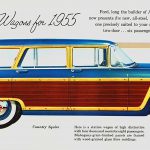 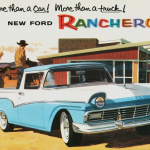 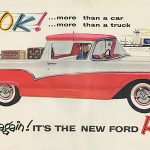