Note: This article is reprinted from the April 2013 issue of Collectible Automobile.

If Frank Sinatra had been a Ford man, he might have sang about how 1963 was a very good year. In Dearborn, it certainly was.

At the start of the model run, Ford’s four passenger-car lines wore freshened styling. For the midsized Fairlanes, the most obvious change was a restyled front end along the lines of the year’s full-sized Fords. The rear fenders still wore small fins, though.

Fairlane offered only two- and four-door-sedan bodies when it was introduced in 1962. For its sophomore season, it added four-door station wagons and two-door hardtops.

The latter was limited to the tonier Fairlane 500 series, and was offered in two versions. For a base price of $2,324, it was possible to get a Fairlane hardtop with a front bench seat.

Then there was the Sports Coupe, which added front bucket seats, a console, spinner wheel covers, and Sports Coupe script on the decklid. It was the only ’63 Fairlane to wear three Buick-style “ventiports” on each front fender.

The best remembered of Ford’s “19631⁄2” additions are almost certainly the Sports Hardtop semifastback two-door Galaxies. The legendary 427-cid V8 was another midyear intro, and the Thunderbird Landau hardtop received a new appearance package. 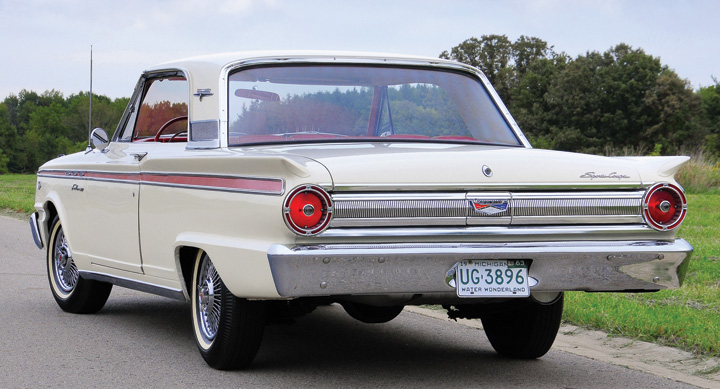 The compact Falcon got in on the action with a new two-door hardtop that shared its general shape with the Galaxie Sports Hardtop. Then, too, there was the sport-themed Sprint model and Falcon’s first V8, a 164-bhp 260-cid small-block inherited from the Fairlane.

The Fairlane was not ignored in mid-1963. While there wasn’t a flashy new model, there was the availability of a thrilling “High-Performance” 289-cid V8 engine that was good for 271 bhp and 312 pound-feet of torque. Performance goodies on the new mill included a four-barrel carburetor, a solid-lifter cam, and header-style exhaust manifolds. Modified heads ran 11.0:1 compression. The new 289 was offered only with a four-speed manual transmission. 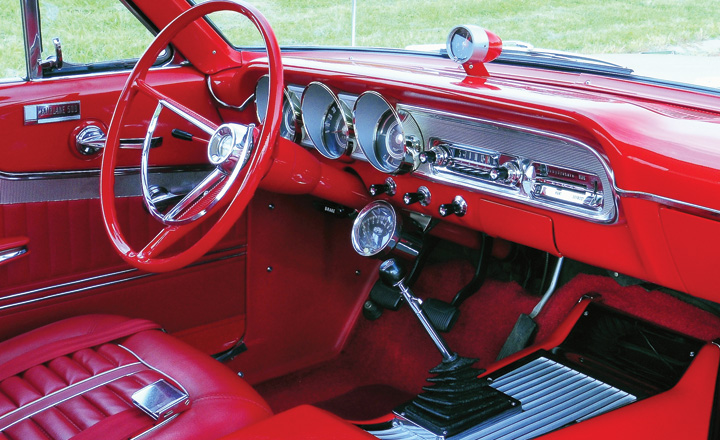 The “Hi-Po” 289 was a natural fit for the Fairlane, since it was the third basic version of the 221-cube small-block V8 that Ford conjured up for the model’s introduction in 1962.

The 289 was strong enough to move a Fairlane from 0 to 60 mph in less than nine seconds. A 289-powered hardtop starred in one ’63 ad with the tagline “Wait till you feel Fairlane’s Sunday Punch!”

The 271-horse 289 is probably best known for being available in the most successful of all half-year Fords, the “19641⁄2” Mustang. Thus, it’s a bit ironic that the engine first appeared as one of the least-known 19631⁄2 additions.

The 1963 Fairlane 500 Sports Coupe featured here has the 271-horse 289/four-speed power team. It is also equipped with several other options including whitewall tires, rocker-panel moldings, wire wheel covers, AM radio, and seat belts. When new, the Fairlane priced out at $3,415.30.

The Corinthian White hardtop belongs to Kenneth Kowalk of Eaton Rapids, Michigan. He is the fifth owner of the restored car.