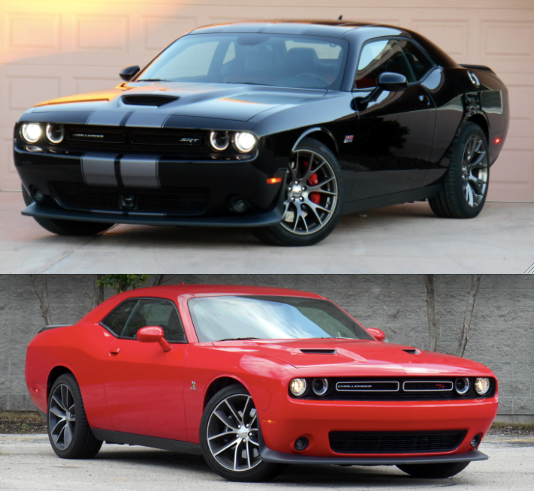 The Challenger SRT 392 (top) trumps the R/T Scat Pack in terms of equipment and accessories, but not power; both Dodge coupes boast a 485-horsepower 6.4-liter V8.

Sometimes, one letter can make quite a difference.

Say, for instance, someone e-mails you to ask where they can get good premium-grade gasoline for their new high-end sports car, and you helpfully reply, “Go to Shell.” But if you accidentally leave off the “S,” well … that becomes a different answer entirely.

Dodge builds a dizzying array of Challengers, from sporty V6 grocery-getters to supercharged fire-breathing monsters. In the middle is the base R/T, with a 375-horsepower 5.7-liter Hemi V8 and $27,000 price tag – by most measures, a performance bargain. But in this day and age, 375 ponies really doesn’t put you in the deep end of the horsepower pool. For that, you need to add an “S.” 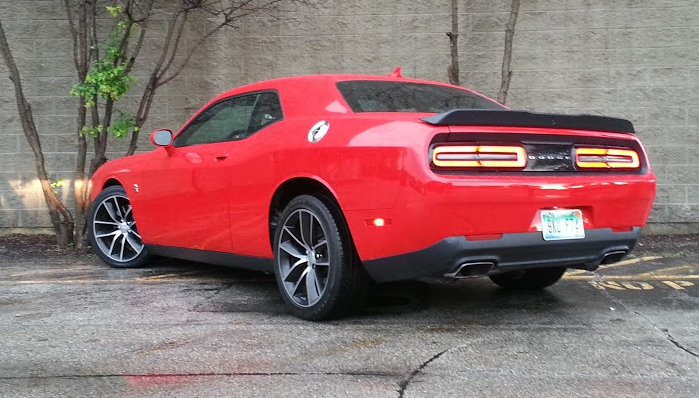 Scat Pack (shown) and 392 model Challengers both ride on 20-inch wheels, though the 392’s rims are half an inch wider.

That can be accomplished in one of two ways. First is the Scat Pack package, which most notably nets you a larger 6.4-liter Hemi with an equally larger – and decidedly more impressive – 485 horsepower. The second is to move up to the SRT 392, which brings the same engine along with wider tires on unique wheels and several interior- and exterior-appearance upgrades. In both cases, money needs to be added to the mix, but the end result is unmistakable: Where the R/T merely feels “strong,” the “S” models feel – and sound – like brutes. Especially at around-town speeds, care must be taken when applying throttle through corners. The transmission kicks down almost instantly, bringing in an abundance of power very quickly – both typically good things – but the antiskid system is set to “loose,” giving the back end a lot of leeway to swing wide in a flurry of wheel spin. (Ask me how I know.) Even in highway cruising, the engine can be heard over the surprisingly low wind and road noise as a baritone rumble that’s simply music to the ears, and the symphony becomes even more pronounced and melodic the farther the noise pedal is depressed. 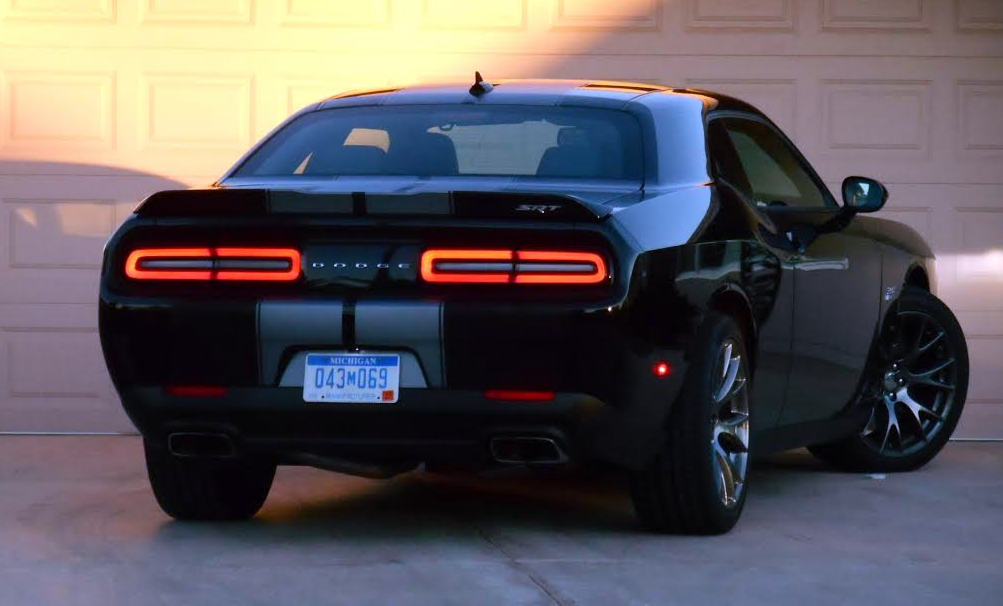 Dodge calls the finish on these 392-specific wheels Hyper Black.

Fuel economy isn’t usually of great importance with performance cars such as these, but it’s worth considering nonetheless. In about 70-percent highway driving, the SRT I drove averaged a decent 20.2 mpg over 247 miles on recommended premium-grade fuel, beating the combined city/highway EPA rating of 18 mpg. The Scat Pack was driven by two different people and given two fills of fuel. My 287 miles included about 85 percent highway driving and netted an average of 24.0 mpg – just under the car’s 25-mpg EPA Highway rating. On the other hand, the other driver (who shall remain nameless) managed just 15.1 mpg in about 65 percent city driving (seems somebody was dipping his toe deeper into the Hemi water), yet that actually beat the EPA city estimate of 15 mpg. The point is, if driven fairly conservatively (admittedly a tremendous challenge) or on the highway, either of these “S” models can return some pretty decent mileage.

So what’s the difference between the two? Our Challenger double-header gave us the chance to find out. 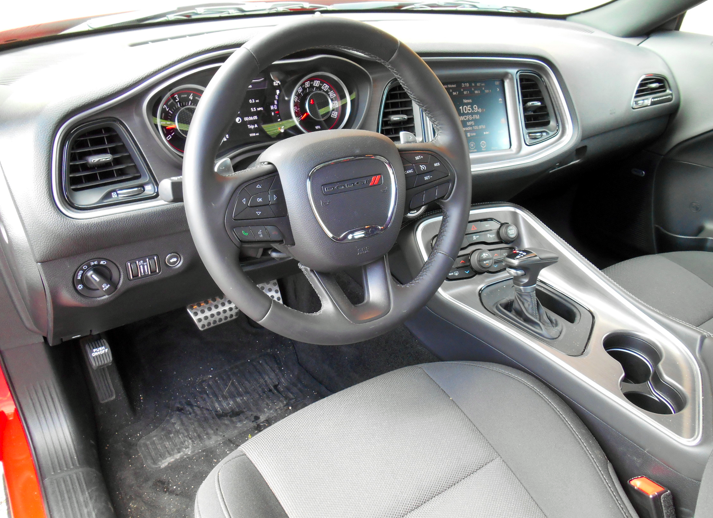 The first difference is noticed by your wallet. The Scat Pack starts at $37,500, a 10-grand jump over the R/T, and the SRT asks for nearly 8 large over that. Both test cars came with options (most notably the $1400 8-speed Torqueflite automatic transmission) that added about $3100 to the Scat Pack for a total of $40,585, and $5000 to the SRT for a bottom line of $51,215 (both including destination). While it’s almost easy to justify the Scat Pack, the SRT might be somewhat trickier – though certainly not impossible.

Both inside and out, the SRT just looks more … special. Our tester had bright-red fabric on the seats and door-panel inserts along with more matte-silver trim on the steering wheel. Though this could be open for debate, the SRT’s split 7-spoke wheels with wider skins (275/40ZR-20s vs. 245/45ZR-20s) looked a bit spicier, and were set off by red brake calipers peeking through the spokes. Also debatable is whether the SRT’s lone Viper-like hood scoop looks meaner than the Scat Pack’s dual snorkels (the former has a more prominent appearance from behind the wheel – which I consider a positive – but the latter reminds me more of those on the ’70 Challenger R/T I had back in the day when a 9-mpg appetite wasn’t as expensive to feed.) And then there’s the stripes. Yes, they were a $595 option, but somehow, the grey-on-black combination on the SRT stood out as almost … stately. 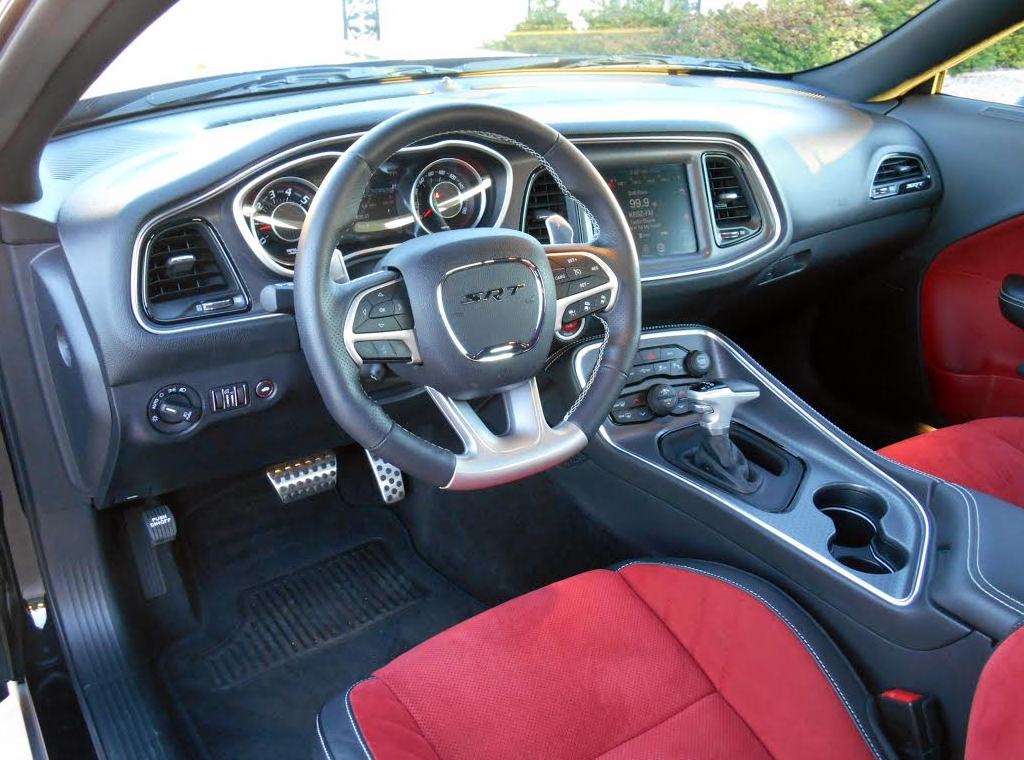 Ritzier trappings are found in the 392.

While the SRT was tested on the relatively smooth roads around Phoenix (and some fast mountain twisties East of there), the Scat Pack had to contend with the rougher roads of Chicago. What stood out in both cases was the surprising suspension compliance for such performance-oriented cars riding on such low-profile tires; all too often, big horsepower is automatically coupled with a bone-crushing ride, but both these steeds proved perfectly acceptable in day-to-day driving while feeling completely capable in the corners.

Challengers are often credited with being more passenger- and cargo-friendly than some other performance coupes, but they’re a long way from rivaling the practicality of a sedan. While there’s fine adult room in front, back-seaters don’t enjoy quite as spacious of accommodations. Though headroom in back is adequate for most any adult, it’s almost wasted by the fact that legroom virtually disappears behind a tall front seater; my 5’9 frame could barely fit behind myself. Furthermore, getting back there can be tough. While the front-passenger seat slides forward along with the seat back at the release of a lever, the driver-side seat needs to be powered forward and it does so very slowly. On both sides, the front shoulder-belt strap bisects the opening and isn’t easily passed.

Visibility suffers to the front corners due to fairly thick roof pillars, and far more so to the rear corners for the same reason; in fact, you’re pretty much a slave to the (quite excellent) rearview camera for backing. By contrast, it’s great to the sides, as there’s no roof pillar at all. 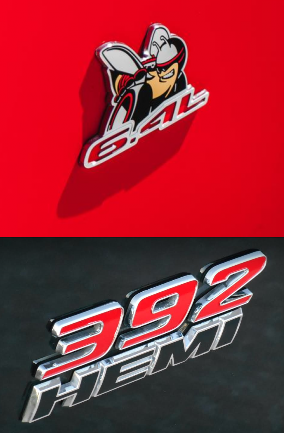 Challengers earn kudos for their control layout. Both of our test cars were equipped with Chrysler’s Uconnect infotainment system, which is generally one of the better designs out there. A large 8.2-inch dash screen has fixed virtual buttons at the bottom that allow you to go right to the selection (audio, navigation, phone, settings, etc.) you want. Volume and tuning knobs are in a separate panel on the console below the screen, which also includes the climate controls. All are easy to reach and fairly easy to use. Both of our test cars included Dodge’s Performance Pages, with allow you to bring up virtual auxiliary gauges (such as water and oil temperature) and perform timed acceleration runs.

Trunk space is good for the sporty-car class, but there’s a tall, deep liftover (a foot from the bumper edge to the opening, and another foot down to the cargo floor) that makes getting heavy items into – and particularly out of – the trunk a real chore. Furthermore, expanding the area by folding the rear seatbacks is neither as easy nor as effective as it might be. Releasing the seat backs requires folding yourself into the rear seat area to pull the straps, and the seat backs won’t lay even close to flat unless the front seat ahead of it is moved farther forward than even a 5’9 occupant would comfortably have it. The folded seat backs rest a couple of inches above the load floor, and while there’s a cloth ramp connecting the two, you still have to push long items “uphill” to get them fully forward.

Challenger primarily competes with the Chevrolet Camaro (which is redesigned for 2016) and the Ford Mustang (redesigned last year), but particularly in Scat Pack or ritzier SRT guise, it could also be considered an alternative to premium coupes such as the BMW 4-Series. Because when you add an S, the Challenger becomes one “Shell” of a hot car.

While muscle cars by definition, and every bit worthy of the legend that accompanies the term, these absurdly powerful coupes are also amazingly refined. In terms of cabin noise levels, ride quality, and available features, the more muscle-bound members of the vast Challenger family serve double duty as both weekend power machines and comfortable weekday commuters.

While the big Dodge news these days is the furiously powerful Hellcat models, these value-priced “big block” monsters are not to be dismissed. They’ll also be a lot easier to insure.