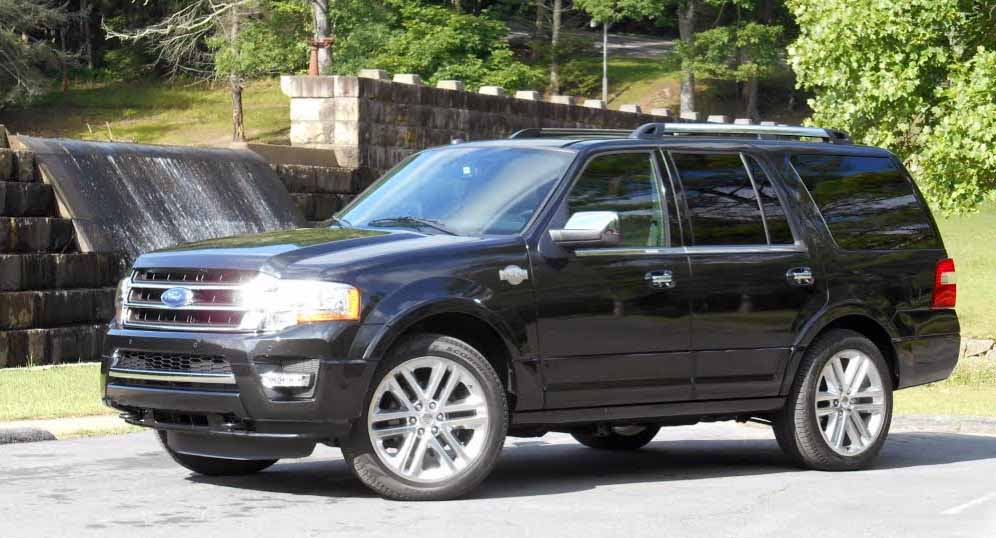 Among large SUVs, Ford’s Expedition has long played second fiddle to its popular quartet of GM rivals, the Chevrolet Tahoe and Suburban, and the similar GMC Yukon and Yukon XL. But maybe it shouldn’t … at least, not based on our drives of the revised 2015 edition.

Like the GMs, the Expedition is offered in two lengths, the longer of which is designated EL (Extended Length). They can seat up to eight passengers. Yet despite being about a foot longer in wheelbase and overall length, the EL doesn’t offer significantly more passenger room than its shorter sibling. Instead, its extra expanse shows up in cargo space, where it lists 42.6 cu ft behind the 3rd row vs. 18.6.

Revisions for 2015 include a new engine, a host of technology features, and a new top-line trim level. 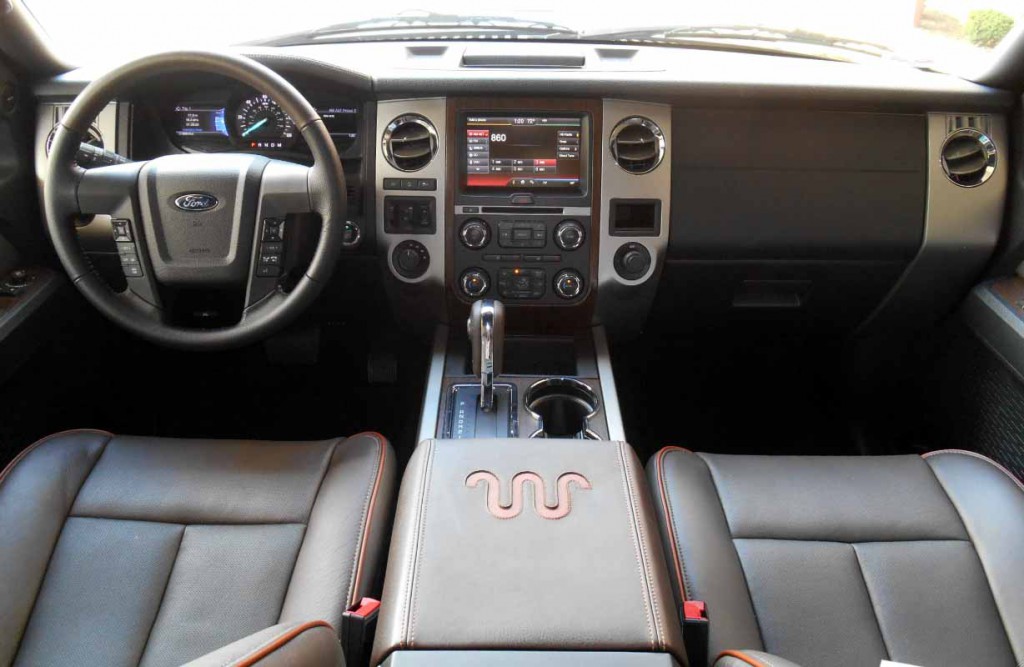 The Expedition’s cabin, shown here in King Ranch guise, falls just short of luxury level. Materials are mostly of high quality, but a number of interior surfaces are merely grained, instead of padded.

On the powertrain front, Expedition trades its former 310-horsepower 5.4-liter V8 for Ford’s 365-horsepower EcoBoost turbocharged 3.5-liter V6. Besides added horsepower and torque (the latter up from 365 lb. ft. to 420), the new engine is expected to deliver improved fuel economy, though official EPA numbers were not available at time of writing. Coupled to a 6-speed automatic transmission with Tow/Haul and manual-shift mode, the powertrain combination results in what Ford claims is a class-leading 9200-lb towing capacity.

Another class-leading claim is for cargo space. The EL can swallow 130.8 cu. ft. of stuff behind the front seating row, roughly 10 cu. ft. more than Chevrolet’s Suburban. Some of this is attributable to Expedition’s independent rear suspension, which leaves more space (and seems to also aid ride and handling) compared to the Suburban’s solid rear axle. 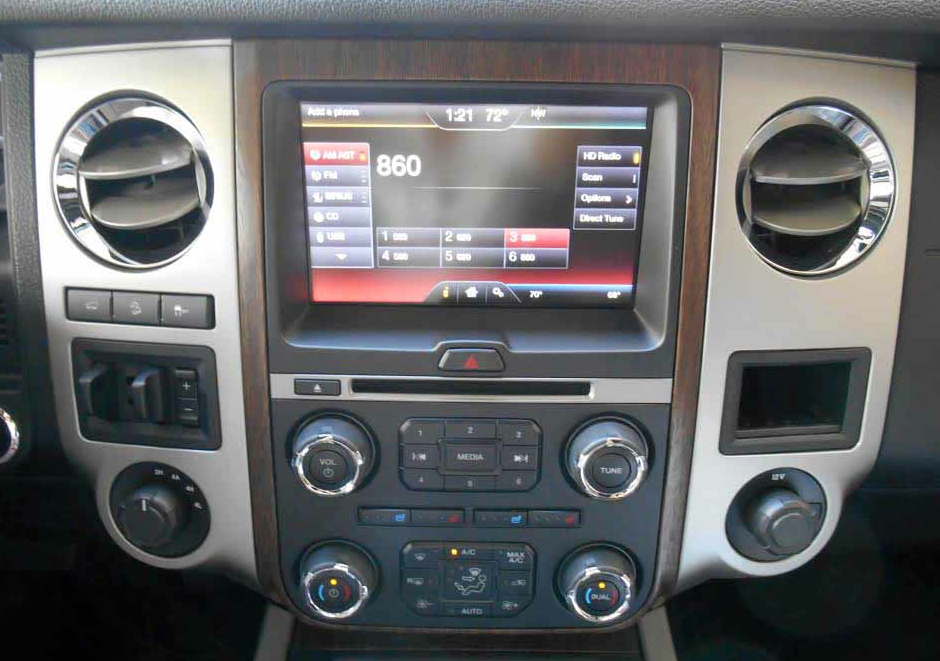 Center stack controls are well organized, but can be a bit of a reach for some drivers.

Newly available on the Expedition are a number of modern high-tech safety and infotainment features. Added for 2015 are blind-spot monitor, cross-traffic alert, rearview camera, and front- and rear-obstacle detection, along with an 8-inch touch screen with Ford’s Sync and MyFord Touch systems.

Because there seems to be no ceiling for what buyers want in terms of luxury and features, the Expedition adds a top-line Platinum trim level for 2015 that mostly brings unique trim and upscale leather seating surfaces in exclusive colors. Returning below it are the base XLT, step-up Limited, and “outdoorsy” King Ranch.

A recent preview drive revealed that the Expedition has a lot going for it – and a couple of areas in which it lags. 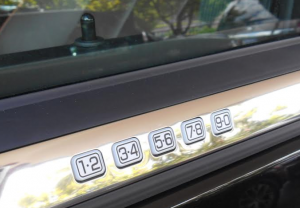 Lock your key in the car? No problem. Ford and Lincoln continue to offer keypad cabin access on a number of models, including the Expedition.

Much has been made of Ford’s EcoBoost 3.5-liter V6. Introduced for 2010 in the company’s large cars and midsize SUVs, the engine was added as an option for the F-150 pickup the following year and has become a surprisingly popular option. As in the Expedition, it replaced a 5.4-liter V8, and it offered more horsepower and torque while providing a 2-mpg (roughly 15 percent) increase in fuel economy.

That’s all good, but the real-life picture isn’t entirely rosy. One problem with turbocharged engines is that they don’t produce their quoted power numbers until the turbocharger has spun up to speed, and that takes a bit of time, particularly when the engine is idling. As such, the Expedition doesn’t jump off the line if you nail the throttle from a stop quite like it did back in its V8 days. Granted, it picks up fairly quickly – say, halfway across an intersection – and pulls strongly after that, and this “lag” isn’t an issue in normal driving, but it’s something some people might notice. On the positive side, we have no such complaint about passing power at either around-town or highway speeds, as response is reasonably quick and quite strong, aided by relatively snappy kickdowns from the automatic transmission.

We have no complaints about Expedition’s ride, handling, or steering feel, either. Our preview drive route contained a surprising number of twists and turns, which wouldn’t normally be the case with a full-size SUV. Part of that was probably to show off the Expedition’s class-exclusive independent rear suspension, along with its available adjustable suspension and new electric power steering.

Though we didn’t encounter any Chicago-style potholes on our journey, the ride seemed perfectly comfortable. Our test vehicle had the optional adjustable suspension, and as in most such systems, the “Normal” setting was the best overall. “Sport “ made the ride a bit brittle, though was predictably best in the twisties, as it made the big beast seem a little more nimble. “Comfort” allowed some wallow over bumps and pavement swells. If you think you want the adjustability, try it first; overall, this is an option most buyers could probably do without.

Ford says one advantage of the new electric power steering (besides a slight increase in fuel economy) is that it allows for easy turning at low speeds. And indeed it does. Yet it also felt fine at regular road speeds, where some such systems take on a numb, lifeless, video-game feel.

Driving the 2015 Chevrolet Tahoe and Suburban

Our King Ranch tester had power-retractable running boards, which really aided ingress and egress, as step-in is rather high. Available are door-mounted keyless-entry buttons, which allow you to get in if you lose your keys or don’t want to take them with you. The seats are long-haul comfortable, with a tiltable cushion. Visibility is good to the front and rear corners, and okay over the shoulder, but the rear-side pillars (next to the rear seat backs) are thick and block a lot. 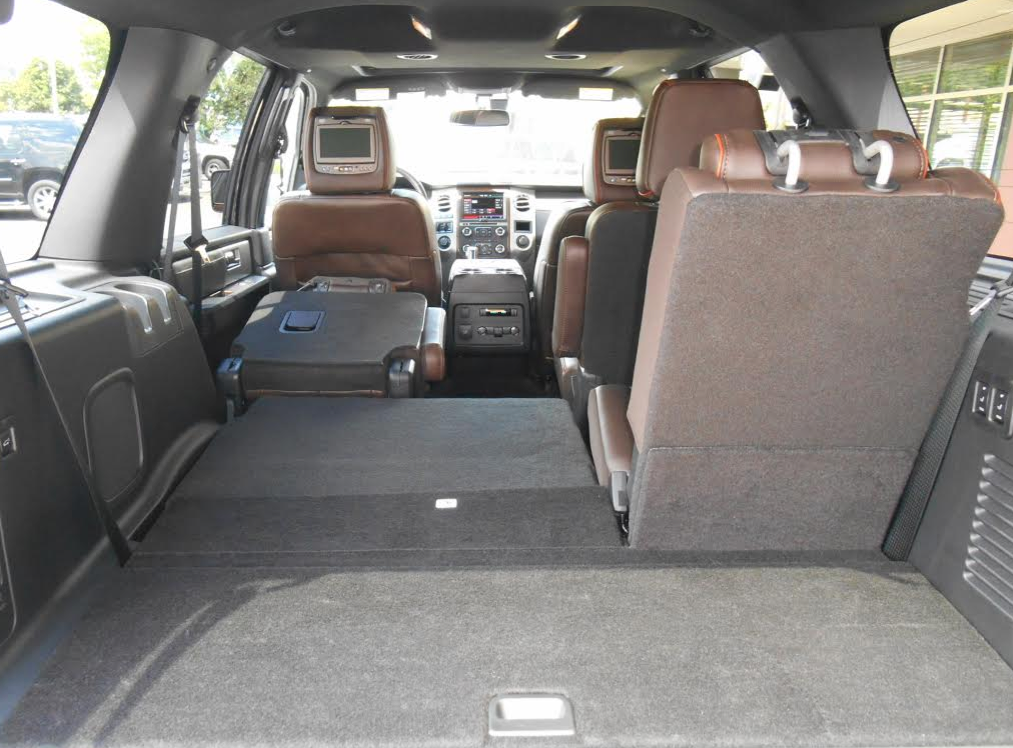 The 3rd row power folds flush into the floor to create a perfectly flat load space.

Although Ford is pushing the Expedition as a luxury-class cruiser, there are some decidedly non-luxury appointments. Most striking on our tester were the hard-plastic dashtop, dashface, and doortops; even the door armrests were not really padded so much as just slightly “flexible.” However, the console lid was nicely cushioned, the woodgrain and platinum-colored trim looked nice enough, and the leather used on the seats (and also for swatches on the door panels) was first-rate.

Partly due to the wide dashboard, the 8-inch touchscreen – through which some audio and climate functions are accessed – is out of easy reach. Furthermore, the remaining rotary controls and pushbuttons are mounted a bit low on the dash, requiring a somewhat long look from the road to adjust. Cockpit storage is quite good, and includes a small glovebox, three small dashtop trays, a small dash-face tray with adjacent 12-volt plug, a console tray, two open cupholders, a decent-sized console box with Aux, 12-volt, and two USB plugs, and large map pockets in the doors.

Even the 3rd row can accommodate average-size adults, and it’s not terribly difficult to get back there. Furthermore, the 3rd-row seat backs power fold into the floor to form a flat load surface. When folded, the 2nd-row seat backs rest a couple of inches above floor level, but they can be tumbled forward to get rid of the “step.” Space behind the 3rd row in the tested short-wheelbase model wasn’t great, but there was a good amount of underfloor storage in a wide, shallow bin. Space behind the 3rd-row seat in EL models is vast.

Although the “refreshed” Expedition is facing off against completely redesigned GM rivals – which we certainly like – if you’re shopping this league, it would be a mistake to overlook Ford’s biggest SUV. It may be a distant finisher in the segment sales race, but it just might be a winner for you.