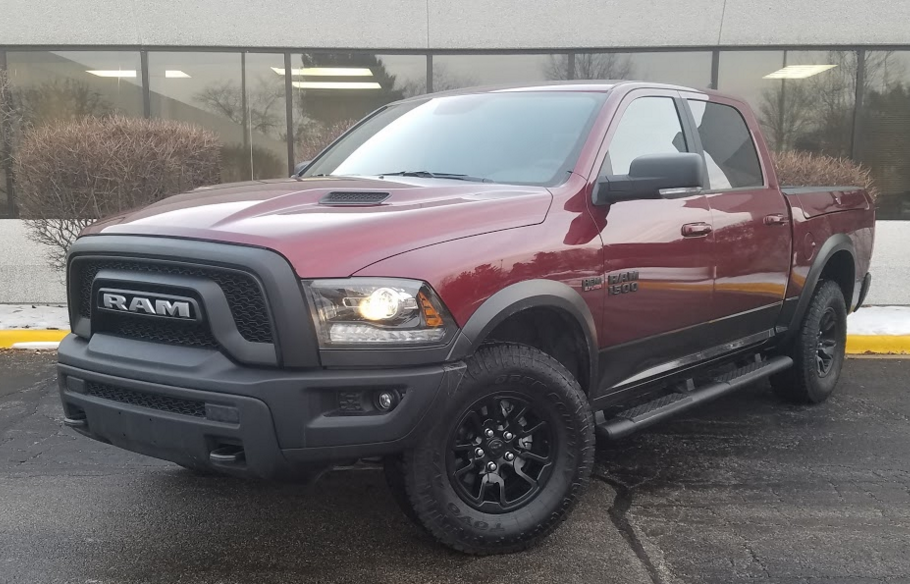 The not so good: Fuel economy, no “normal” 4WD High setting

While the imposing Rebel certainly strikes an attractive stance, be warned that some of its “off road” features take a bit of a toll on its practicality for street use. 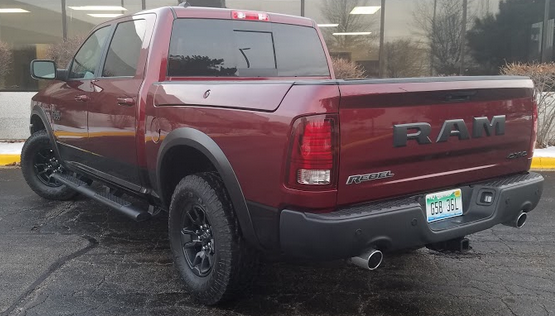 Our tester’s black-painted wheels and rear bumper are part of the optional $595 Black Rebel Group.

We covered a similar 2016 Ram Rebel in more detail previously, but this example gave us an opportunity to check out a few more features found on our 2018 version.

Although recent Ram 1500s have impressed us as especially “civilized” pickups, that really isn’t the Rebel’s mission. Perhaps the most obvious evidence is that our tester’s 4WD system carried only 2WD, 4WD Lock, and 4WD Low settings, notably lacking conventional 4WD High or full-time 4WD Auto modes, which would normally be used on snow-covered streets and is what’s found in most other 4WD Ram 1500s. As such, we noticed some “skipping” when taking sharp turns in 4WD Lock (which locks the center differential) that wouldn’t be an issue in most other Rams.

The air suspension allows you to lower the truck for ease of entry, then simply push a button on the dash to raise the suspension for off-road clearance.

Of further help off road would be our tester’s height-adjustable suspension. Simply push buttons on the dash, and the Rebel’s standard air-adjustable suspension can lower the vehicle for easier ingress/egress and raise it a few inches for more off-road clearance. Meaty 17-inch off-road tires are also standard, and though they certainly look neat, their mass seemed to make the ride a bit bouncier over bumps (though it’s still great for a pickup), and the aggressive tread seemed to generate a bit more noise at highway speeds. Almost oddly, skid plates had to be added as a $225 option.

Our 2016 Rebel averaged a rather dismal 14.1 mpg in about 40 percent highway driving. This example racked up about 70-percent highway miles, which helped boost fuel economy all the way up to … 14.3 mpg. Neither matched even the EPA City rating (15 mpg), let alone the 17 mpg Combined rating. We’ve noticed before that Ram’s V8 seems a bit thirstier than those in other big pickups, so you pay at the pump for the Rebel’s very satisfying acceleration.

Pickups are all about cargo-carrying capability, and the Rebel offers its share. The box on our tester was fitted with adjustable tie-down rails and a bed divider, both grouped with the rear-fender Ram Boxes (something we really find handy) as a $1295 option. There’s also plenty of interior storage space, and though that’s about par for the big-pickup course, the Ram includes “extras” in the form of some small dash cubbies, upper and lower gloveboxes, and bins in the doors. But we were surprised to find that the cupholders aren’t large enough to hold 1-liter bottles, and it took some searching to discover that the large console box contained hard-to-see Aux and two USB plugs. (Both 12-volt and 115-volt AC plugs are in the lower dash.)

There is a ton of interior storage space in the Ram, including several dash and console bins that come in handy for stashing small stuff. Below the shift dial (to the left of the climate controls) are the transfer-case buttons, which include only 2WD, 4WD Lock, and 4WD Low, along with a Neutral button in the center.

Although we’re generally enamored with Ram’s control interfaces for its infotainment and climate systems, we find it odd — and less than optimally convenient — that you have to go through the touch screen to adjust the climate control’s mode setting.

This is the last year for the current-generation Ram, as a redesigned model is due later this year as a 2019 model. Yet the 2018 remains one of our favorite big pickups, with the Rebel adding a nice dash of machismo.

Rebel sacrifices a little bit of on-road composure for its off-road prowess, but this is about as good as big pickups get.