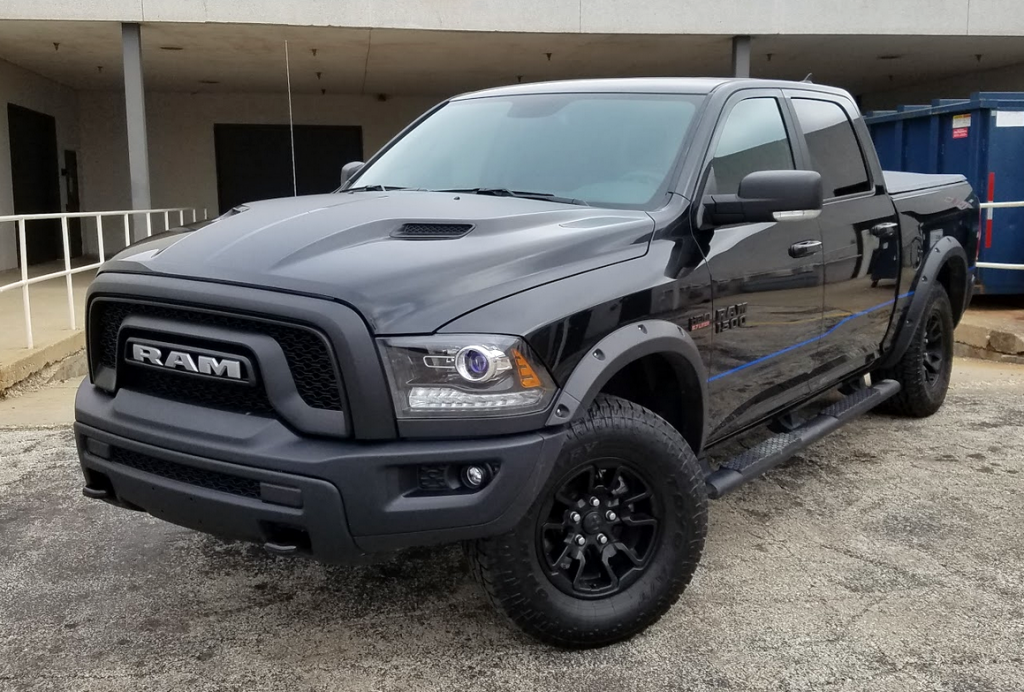 The good: Broad range of options for functionality and appearance

The not so good: Copious thirst for mid-grade gasoline

The Ram 1500 pickup’s last full redesign was all the way back in 2009, but the company has made several updates and improvements over the years (most notably an 8-speed automatic transmission, revamped frame, and available turbodiesel and gasoline V6 engines) to keep the basic design fresh. Another way that Ram pickups manage to stay in the spotlight is the steady flow of uniquely trimmed models and special-edition appearance packages—and our 2016 Mopar ’16 Ram Rebel test truck actually qualifies as both. 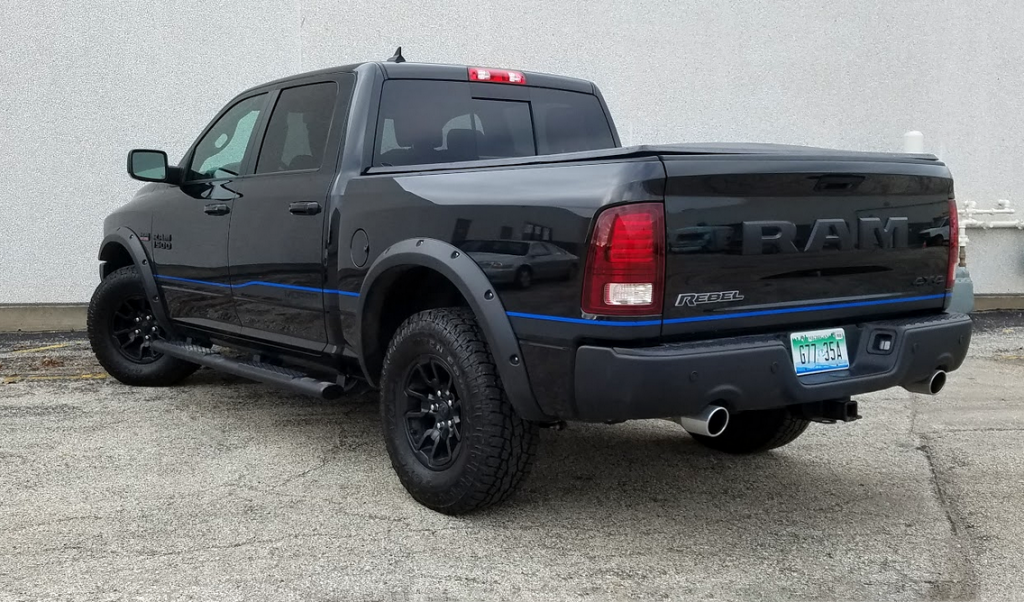 Off-road wheel flares, flat-black wheels, and tape-stripe graphics are included in the $2800 Mopar ’16 package, but the tubular side steps ($425) and tonneau cover ($500) are stand-alone options.

The Rebel trim level itself is notable—it joined the Ram lineup for 2015 as a rugged, off-road-oriented model with a unique blacked-out grille, a twin-scooped hood that recalls the 1970 Dodge Challenger R/T, and special interior trim. Its standard four-corner air suspension includes selectable off-road, normal, aero, and entry/exit modes (the last one is accessible only when the transmission is in park). 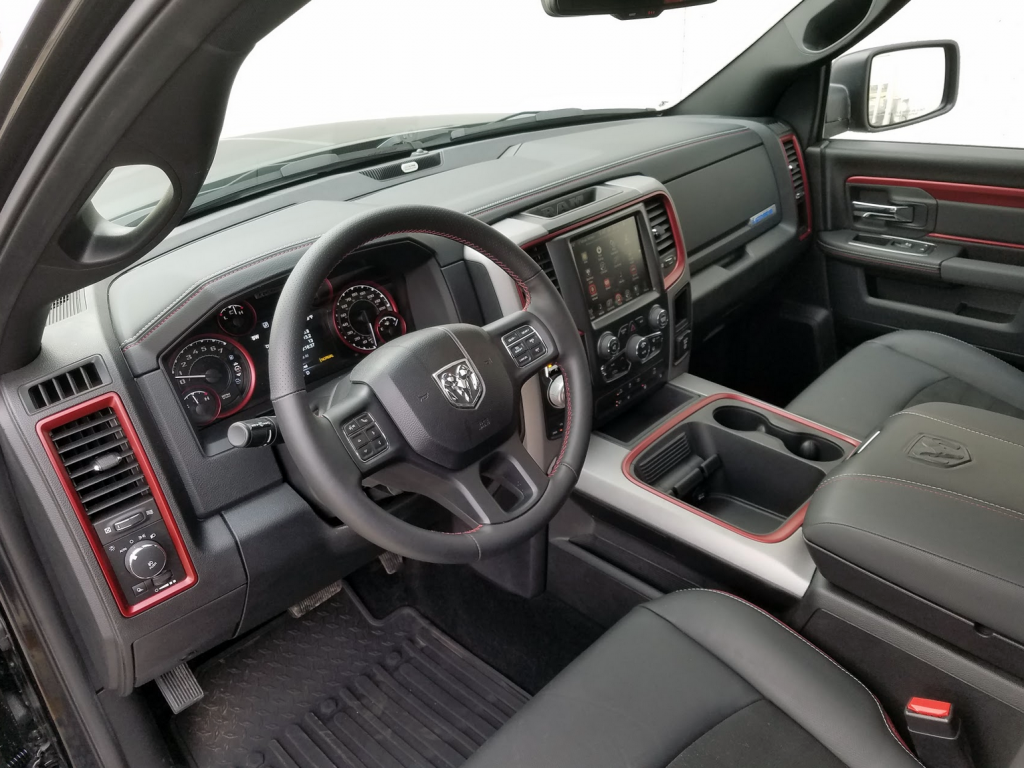 Though, like its name implies, the Mopar ’16 edition is a one-year-only deal, the Ram 1500 trucks don’t see any major changes for 2017. Some trim levels gain a higher level of standard equipment, all models get a 5-micron cab air filter, and the 6-speed transmission is discontinued (leaving the Torqueflite 8-speed automatic as the Ram 1500’s sole transmission).

The blackout treatment of the Mopar ’16 package makes the already macho Rebel look even more intimidating, and the brawny growl and prodigious power of the 5.7-liter Hemi V8 back up the looks. With 395 horsepower and a 3.92 rear-axle ratio, our tester was plenty snappy whenever we wanted it to be. The downside, not surprisingly, is poor fuel economy, even for a full-size truck. In a test that consisted of about 40 percent highway driving, we averaged only 14.1 mpg—below even the EPA city estimate of 15 mpg (the EPA highway and combined mpg numbers are 21 and 17, respectively). The muscular roar of the Hemi certainly invites getting heavy into the throttle often, but we considered ourselves fairly responsible with the gas pedal during this test—so the low numbers were especially disappointing. 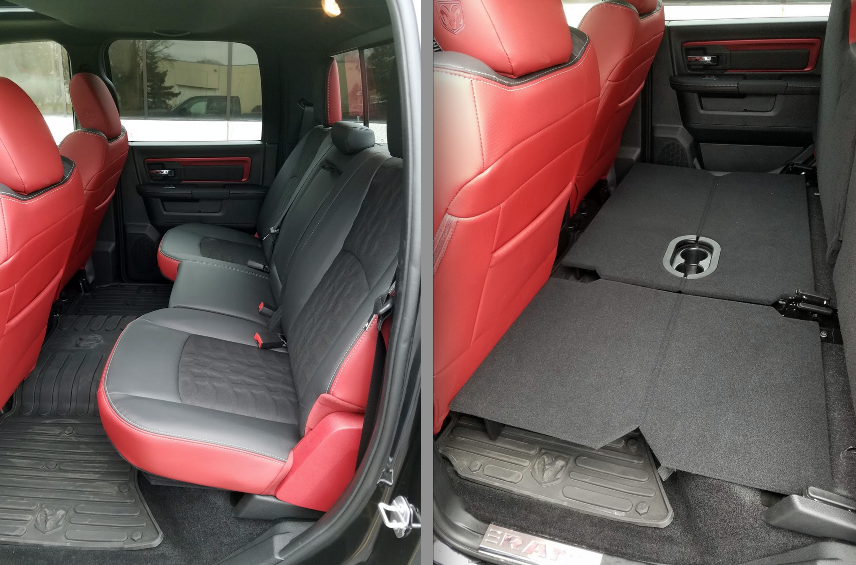 The Ram Rebel’s rear seat-bottom cushions flip up and under-seat panels fold out to create a level load floor for hauling larger items inside the cabin. The rear-seat area is spacious even for plus-size passengers.

The Ram’s tractability and ride quality were far from disappointing for its class, however. The coil-spring rear suspension makes the Ram a bit more comfortable ride-wise that other full-size pickups—though there is still a bit of telltale body-on-frame shuddering over sharp bumps and rough pavement. The decent turning radius and nicely weighted steering make it relatively easy to park and maneuver for such a large vehicle. We’re also fans of the rotary-dial gear selector—it falls readily to hand, it’s easier to use than a steering-column shift lever, and it frees up space on the console. 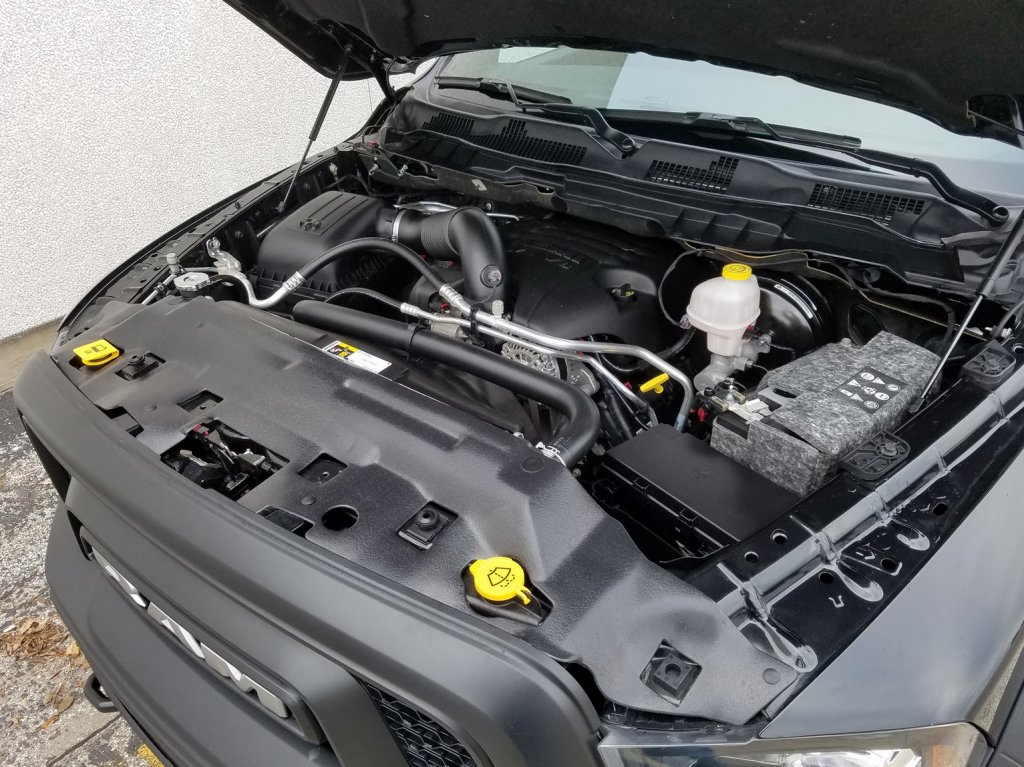 The Rebel comes only as a Quad Cab with the 5’7” bed. The cavernous cabin offers ample space for plus-size passengers, and small-items storage areas abound. We appreciated the many thoughtful features, such as generously sized open console bin with slots for routing phone-charging cables the armrest-lid storage well with a coin holder and USB/aux/SD card ports, and the fold-out load-floor panels that can be used when the rear seat cushions are folded up.

Ram designers are clearly having a lot of fun designing the cabins of their pickup trucks. The Rebel’s imaginative design details and upscale touches help draw attention away from the few cheap-looking plastic panels hiding out in the interior. There are attractive red accents and contrast stitching on the seats, door panels, and dash; embroidered Rebel and Ram logos on the front seats; clever “tire-tread” upholstery inserts; and floor mats with molded-in “bolt-head” detailing. All this styling stuff is essentially window dressing, but it is very well executed… and just plain fun.

Decked-out full-size pickups like this one don’t come cheap. Our tester penciled out to $57,125 all in, and if we were you we’d work fuel costs into our monthly budget as well. Do without the pricey special-edition stuff and a few other options, however, and you can get the sticker price closer to $50K—still a lot of money, but a decent value for a nicely-equipped truck that offers this kind of space and power.

The Ram Rebel comes standard with a driver-adjustable air suspension. The “normal” ride-height setting is pictured here, but an off-road setting can be selected for higher ground clearance.