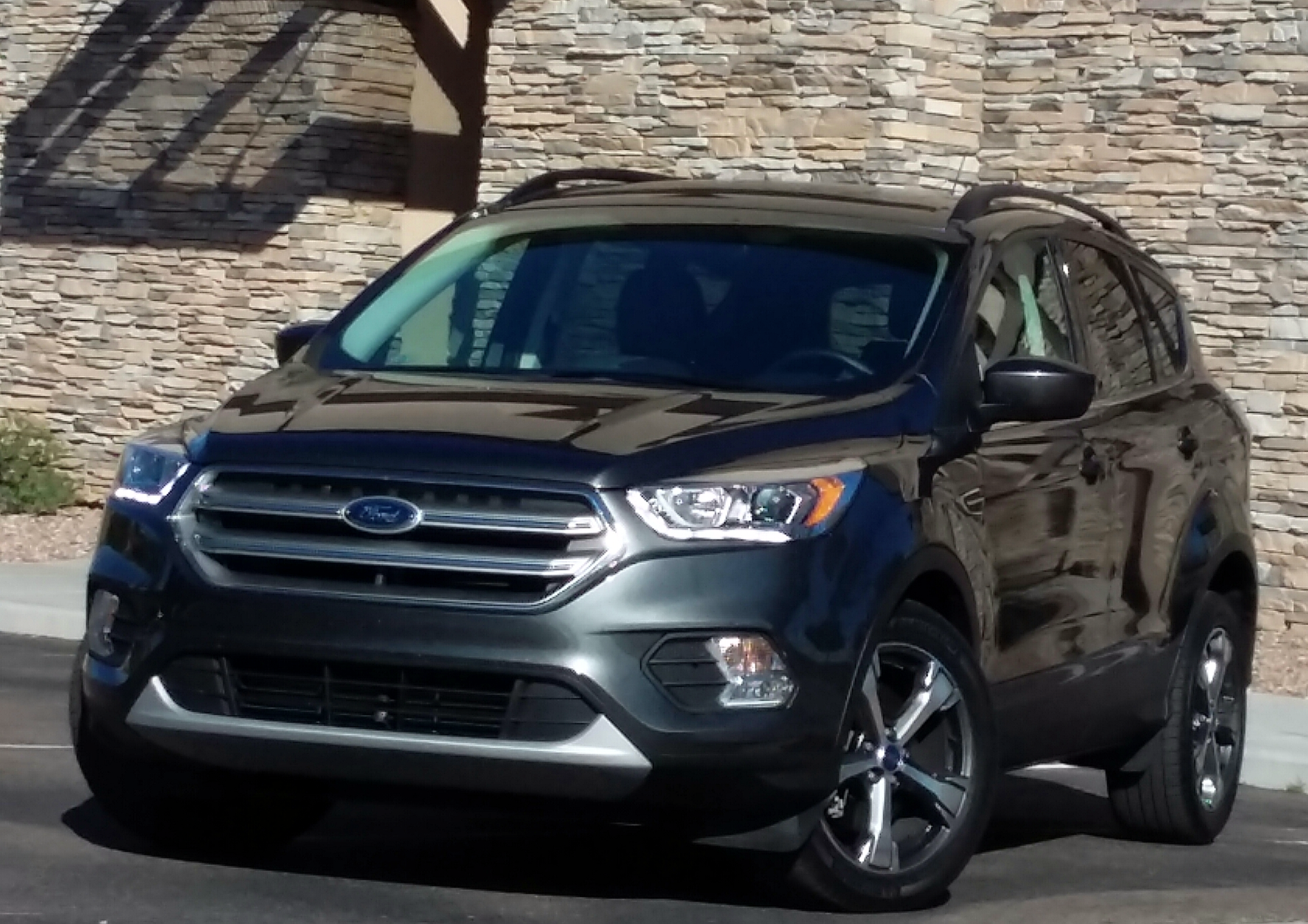 The not so good: Fuel economy not on par with best in class

Ford’s Escape has long been near the top of the compact-crossover sales charts, and our tests of 2017 versions have provided a strong indication as to why. 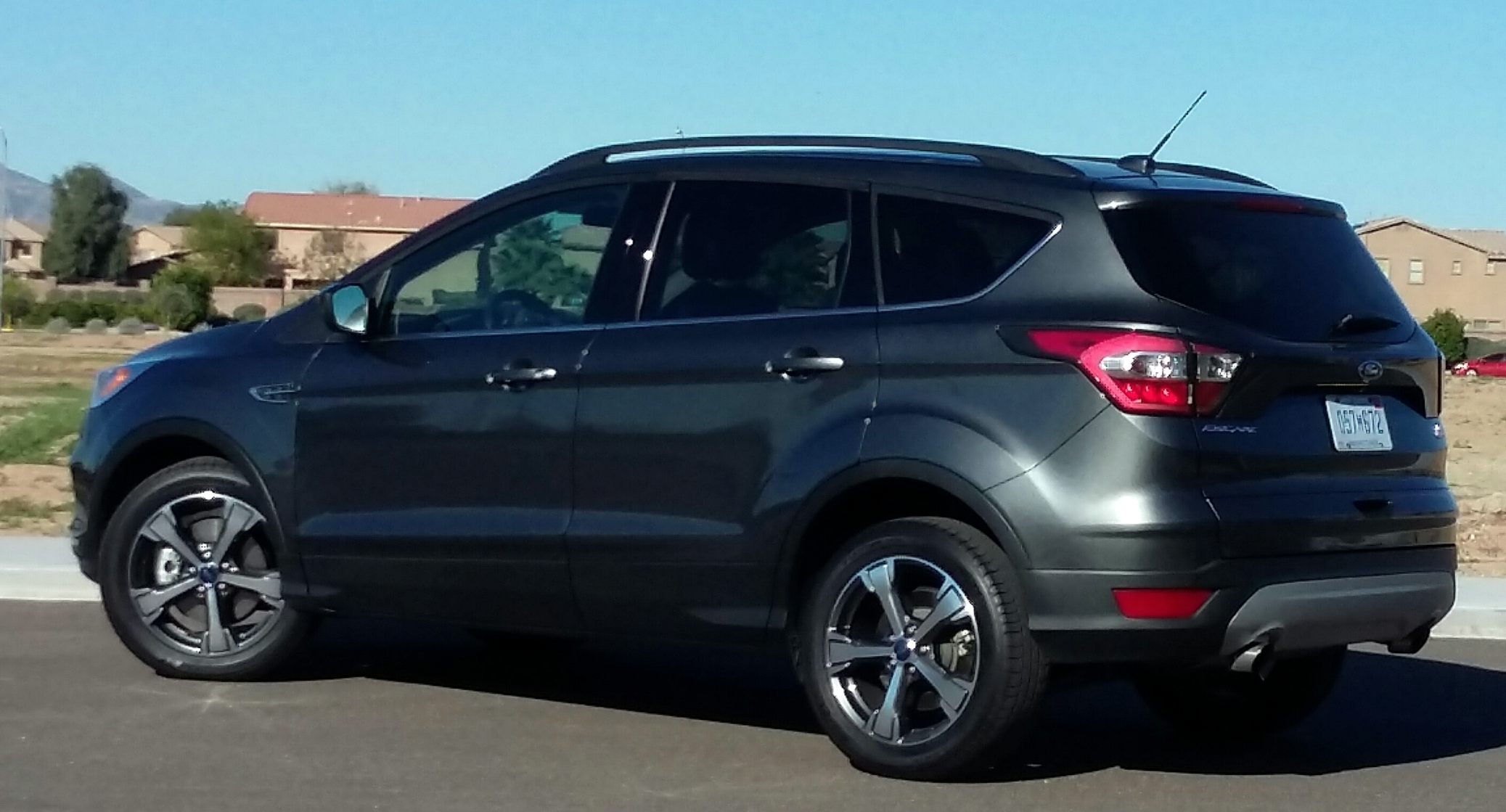 This test Ford Escape SE was fitted with the optional — and more potent — 2.0-liter EcoBoost engine (vs. the 1.5-liter EcoBoost in a previously tested Escape SE), which gave it impressive performance for the class.

Like our previous test vehicle, this well-equipped front-drive SE started out at $25,995 including destination. But to it were added $7665 worth of options, among them the $1295 2.0-liter engine. That last sum may sound a bit steep for what seemingly amounts to just half a liter of added displacement (they’re both turbocharged 4-cylinder engines), but the jump in power – both on paper and in driving feel – seems well worth the money to us. Horsepower output is raised from 179 to 245, while the EPA fuel-economy ratings drop by just 1 mpg to 22 city/29 highway/25 combined. (That seemed to check out in our real-world driving, as the 1.5 returned 23.4 mpg in 65 percent city driving, while the 2.0 averaged 23.5 in 30 percent city driving — some of it in a bumper-to-bumper rush-hour slog.)

In most small turbo engines mated to an automatic transmission, flooring the throttle from a stop results in rather timid initial acceleration followed (after varying lengths of time) by a surge in power as the turbo spins up to speed. But 2.0 liters isn’t really a “small” engine to start with, which likely explains why our tester came off the line with a bit more gusto than some turbocharged competitors, and 20 feet out, would suddenly start to spin the front tires! Furthermore, stabbing the throttle while underway resulted in a fairly quick downshift from the 6-speed automatic transmission, immediately followed by a figurative kick in the pants. In both these scenarios, the Escape exhibited a bit of “torque steer” – a slight side-to-side sawing of the steering wheel as the front wheels scramble for traction – though keep in mind that this effect would likely be lessened with all-wheel drive. Furthermore, the stop/start system was relatively unobtrusive, which not all are. So, big points for powertrain performance. 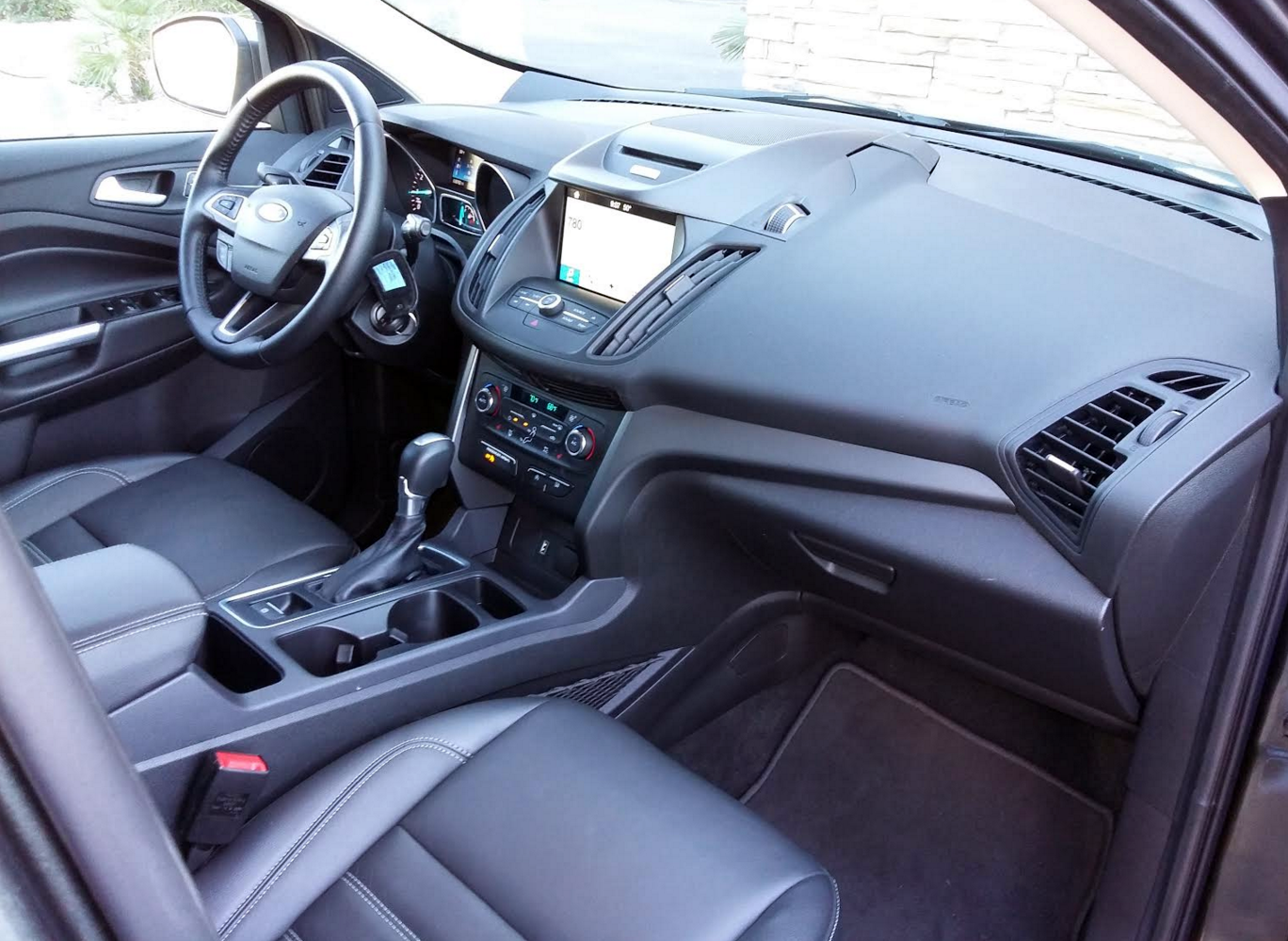 Lots of deeply padded surfaces and comfortable seats make up for what — in all black, at least — is a rather subdued-looking interior.

Oftentimes, the most powerful engine offered automatically comes with a stiffer suspension and low-profile tires, both of which sacrifice some ride comfort for greater handling prowess. That’s not always appreciated in urban areas that don’t enjoy the smooth, twisty roads of coastal California. But while the SE felt decently sporty in around-town maneuvers, it also seemed to soak up bumps and pavement imperfections quite well, making it more of a “luxury hot rod” (admitted hyperbole in this compact-SUV case) than some of its equally potent competitors. So again … added points.

Then there’s the driver seat. Certainly seat comfort is subjective, but I found the driver’s bucket (leather-covered and heated thanks to the aptly named $1595 SE Leather Comfort Package) to be more cosseting than most, as it wrapped around my lower back and provided power lumbar adjustment to tailor the support. So for me, at least, another point.

In most other ways, the Escape is competitive with the best in this class. 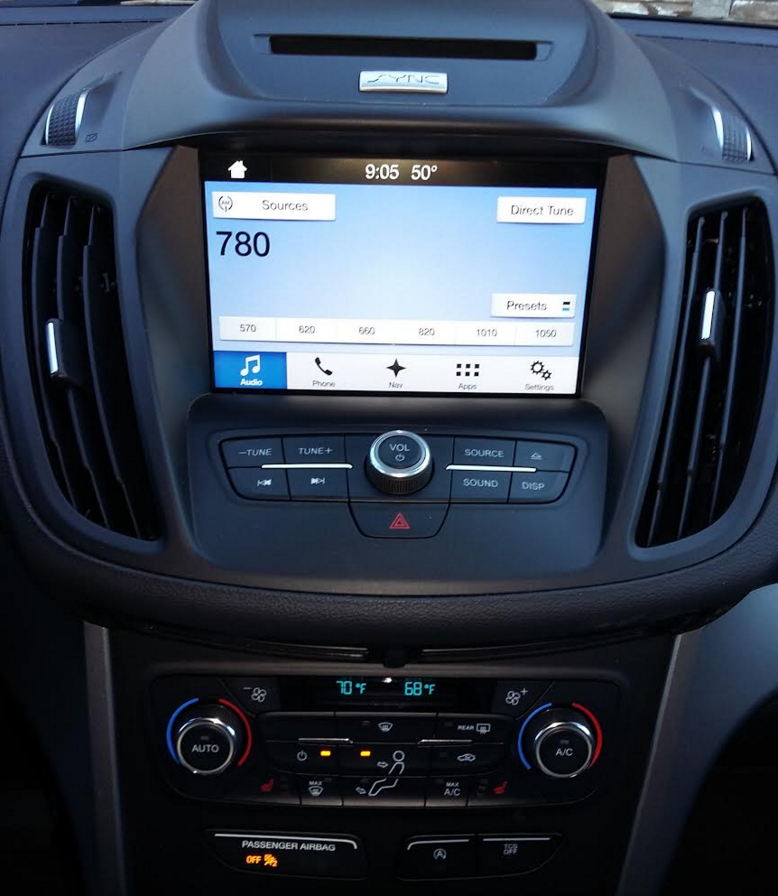 The recessed touchscreen is difficult to hit with just your index finger, but if you rest the others on the ledge in front of it, you can not only reach the screen more easily, but steady your hand in the process.

There’s fine room for four adults, though rear-seat headroom is only sufficient to accommodate those up to about 6 feet tall, at least under our test vehicle’s optional $1495 panoramic sunroof. My 5’9 frame had sufficient knee room to sit behind a front seat moved all the way back – though just barely – and ingress and egress are a breeze. However, some rivals are roomier in back.

There are numerous soft-touch surfaces inside – including the door tops – and they wear deeper padding than found in most rivals. But unless you really favor “subtle,” the black trim (on black surfaces) doesn’t add much in the way of visual interest. Visibility is good to the front corners, decent to the rear corners, but only fair to the sides due to thick roof pillars, though our test vehicle’s optional blind-spot alert — part of the $1395 Equipment Group 201A that also includes rear-obstacle detection, a roof rack, and Ford’s Sync 3 infotainment system — helped a bit with that.

Ford has taken some heat in the past for its MyFord Touch infotainment systems, critics complaining of overly complicated control logic. The new Sync 3 system is much better, and though there are a few more changes we’d like to see, it was – in many ways – easier than many to use. There’s a volume knob but no tuning knob, the latter adjustment being made through rather tedious repetitive-step pushbuttons. Most other elements are on the touchscreen, which is a bit of a stretch to reach, partly because it’s inset into the dash. That placement makes it difficult to hit some buttons the “normal” way – that is, using only your index finger. The secret, we found, was to rest all your fingers on the “ledge” in front of the screen (which serves to stabilize your hand on bumpy roads), then hit the desired virtual button with your pointer. Climate controls are easy to reach, but only temperature is controlled by a rotary knob; mode has individual buttons, while fan speed is adjusted with repetitive-step pushbuttons. (Are you getting the idea I don’t like those much?) 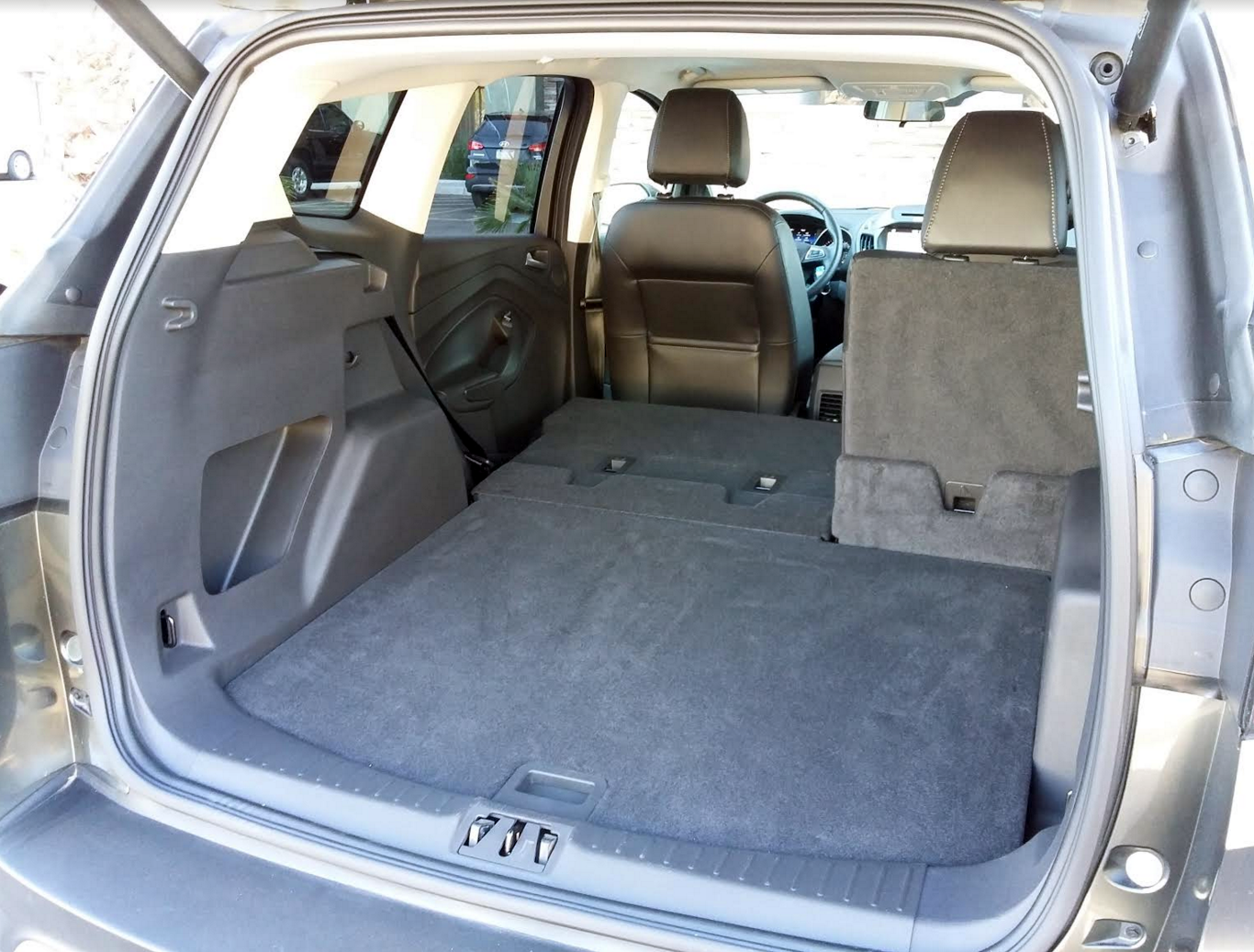 One thing I did like, however, was the navigation-system logic. Inputting an address was easy using the virtual touchscreen buttons, and also worked well by voice command – which is not always the case.

Also “like-worthy” was the interior storage. There’s a large glovebox, decent-size console box with USB and 12-volt plugs, another set of USB/12-volt plugs in a lower dash bin, two console cupholders, three small console bins, a net pocket on the passenger’s side of the console, small trays at the outboard base of the front seats, and map pockets with cupholders in the doors. 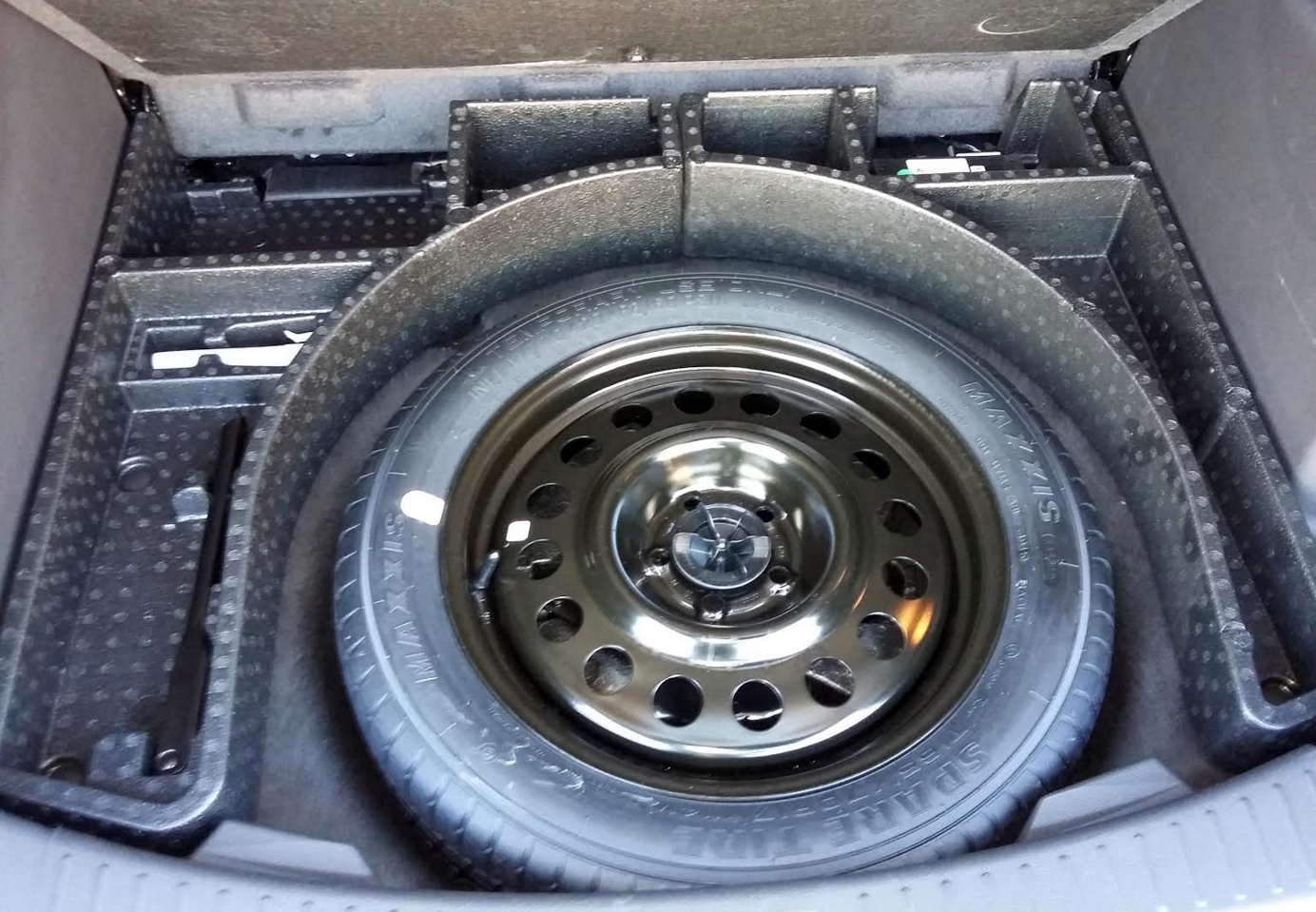 … And there’s even more under the cargo floor.

Even more likable was the cargo area. Not only is it usefully large and cubic in shape, the rear seat backs fold flat and level with the cargo floor, there are tie-down hooks and side pockets in the walls, and there are a number of cushioned, segmented bins under the cargo floor. Icing on the cake was the optional $495 power liftgate.

While the top sellers in the hotly contested compact-crossover segment are the Honda CR-V and Toyota RAV4 – both very good vehicles themselves – anyone with those two on their shopping list would be well advised to also check out the Ford Escape … especially one with the potent 2.0-liter EcoBoost engine. 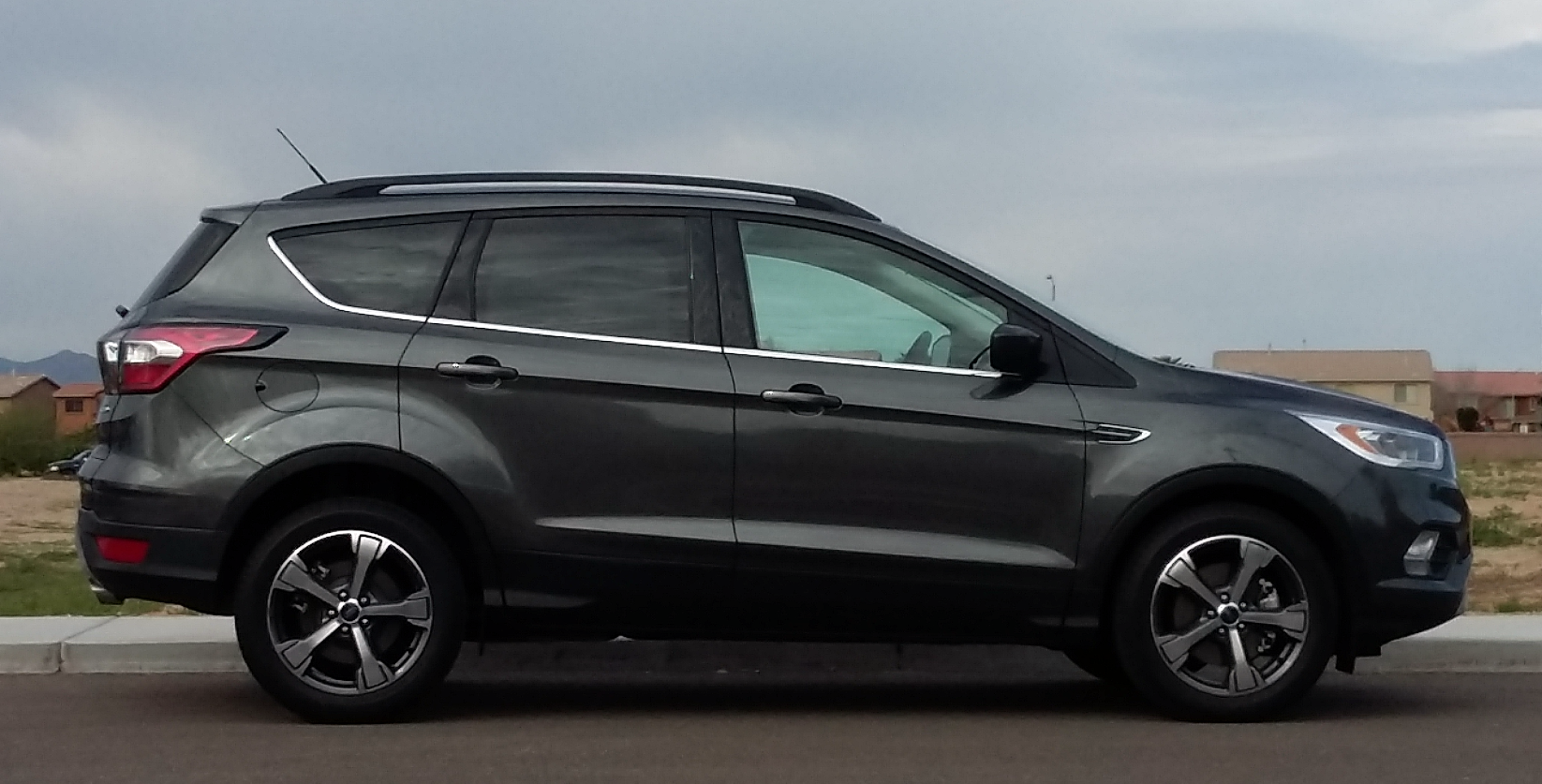 Particularly with the optional 2.0-liter EcoBoost engine — among the most powerful offered in a compact crossover — the Escape holds its own against the top sellers in the class.