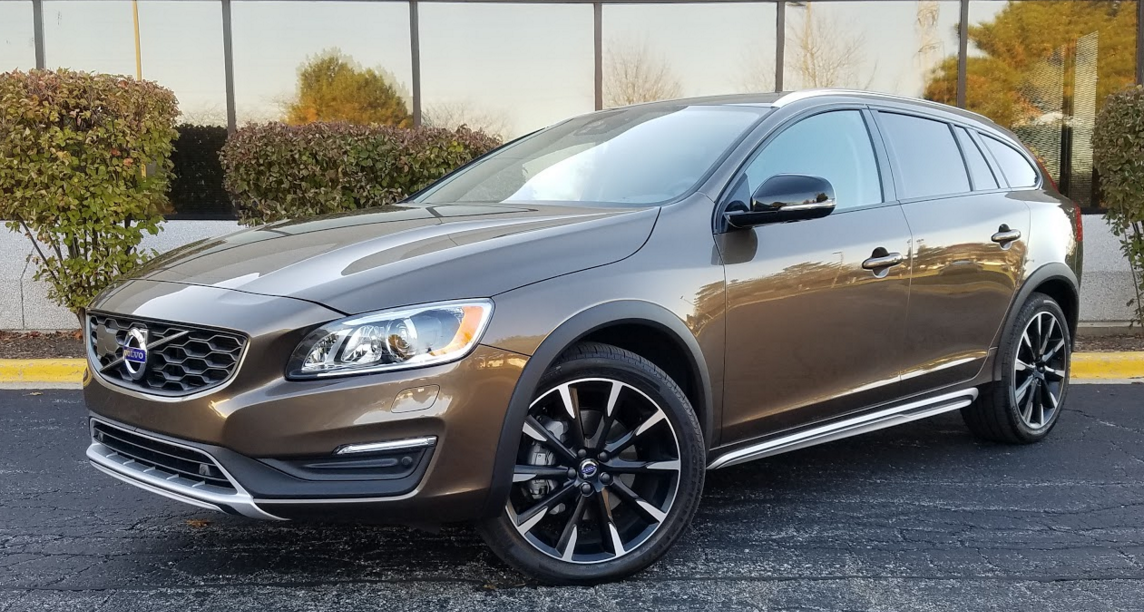 The not so good: Infotainment-system controls, rear-seat room 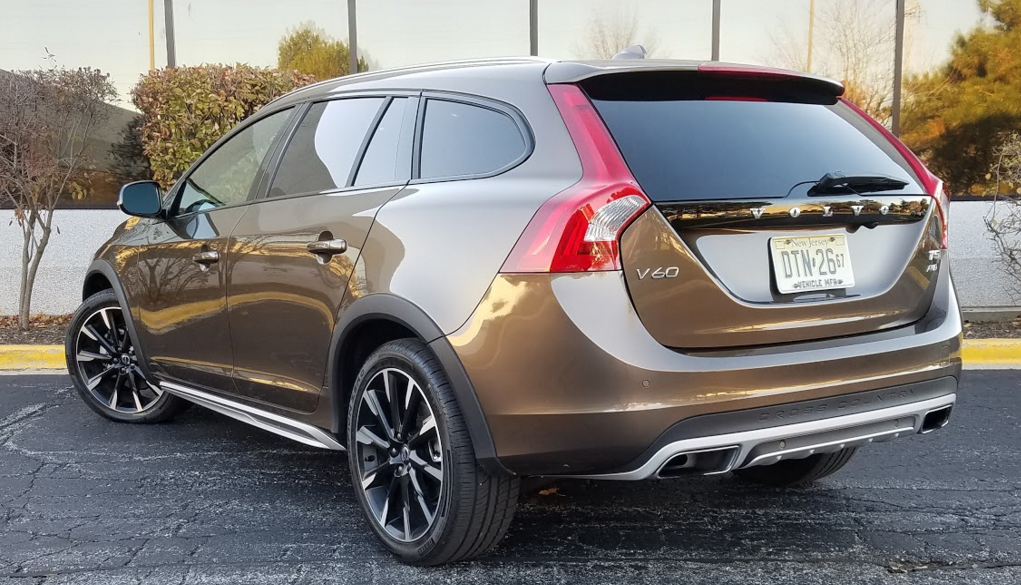 Times change. The station wagon was once seen as a quintessentially American vehicle, the official pace car of suburban baby-boom families from sea to shining sea. Nowadays, there aren’t so many true wagons for sale in the USA, and—as it turns out—almost all of the ones that are left come from European manufacturers.

Perhaps the most dedicated advocate of the body style right now is Volvo, which makes wagons in two sizes and several choices of trim and mechanicals, including a sports model, no less. Among the variations is the Cross Country, offered in the V90 and V60 lines as something potentially a little more off-road (or bad-road) capable than a basic wagon but not quite even to the level of a crossover SUV.

The smaller and cheaper Cross Country is the V60, one of which Consumer Guide® editors had a chance to test. The V60 Cross Country, which has been around since the middle of the 2015 model year, gets a change under the hood as its chief alteration for ’17.

Formerly powered by a 2.5-liter 5-cylinder engine and 6-speed automatic transmission, it picks up the 240-horsepower turbocharged 4-cylinder engine and 8-speed automatic already in use by other Volvo models. (Vehicles with this engine in any product line are considered T5 versions.) When CGers tested an S60 sedan with this powerteam, they found it to be an eager performer. If perhaps not up to exactly the same level in the heavier Cross Country wagon, the turbo four is still quite sufficient. It could be a little stingier with gas, though. The Cross Country’s EPA mileage estimates are 22 mpg in city driving, 30 on the highway, and 25 combined, but this tester couldn’t even reach the minimum, averaging 21.05 mpg after a 170.7-mile stint with 72 percent city-style driving. (That average might have improved slightly had he left the stop/start feature engaged.) 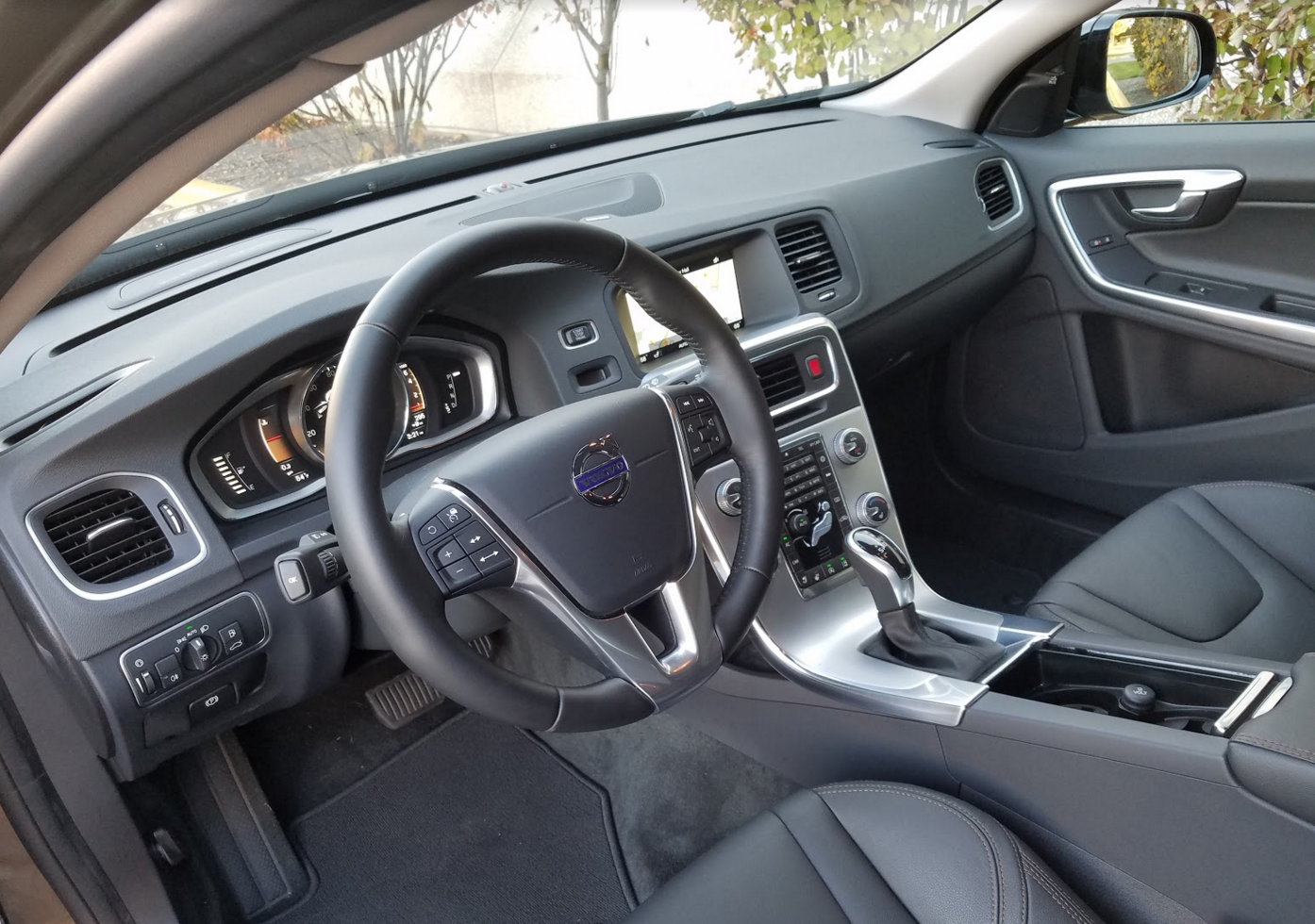 Interior appointments impress, but the multi-button infotainment controls can be a bit tedious to use.

Regardless of how much a buyer might spend on V60 Cross Country it will deliver a commendable amount of ride comfort (with a little bit of a jolt on serious road imperfections), responsive handling (despite “disembodied” steering), and sure braking. The nicely appointed interior has good front-seat room but cramped legroom and reduced headroom in back. Drivers will find outward vision good in just about any direction. The boost in ride height doesn’t impose any serious penalty on passenger entry and exit.

The infotainment system is beset by a lot of buttons on a centralized pad beneath the in-dash display screen. (This tester can’t shake the image of an old touch-tone telephone when he sees it.) Buttons for related tasks governed by this keypad tend to be grouped together by function, but there are complications. For instance, it takes a little more work than it should to find and save radio stations. Climate settings are also made on this pad with dials for temperature settings and a “seated-person” icon with sections that can be pushed to select where the fan blows: head, torso, and/or feet. Vehicle information shows up on a configurable display in the instrument cluster with steering-wheel thumb-button control. 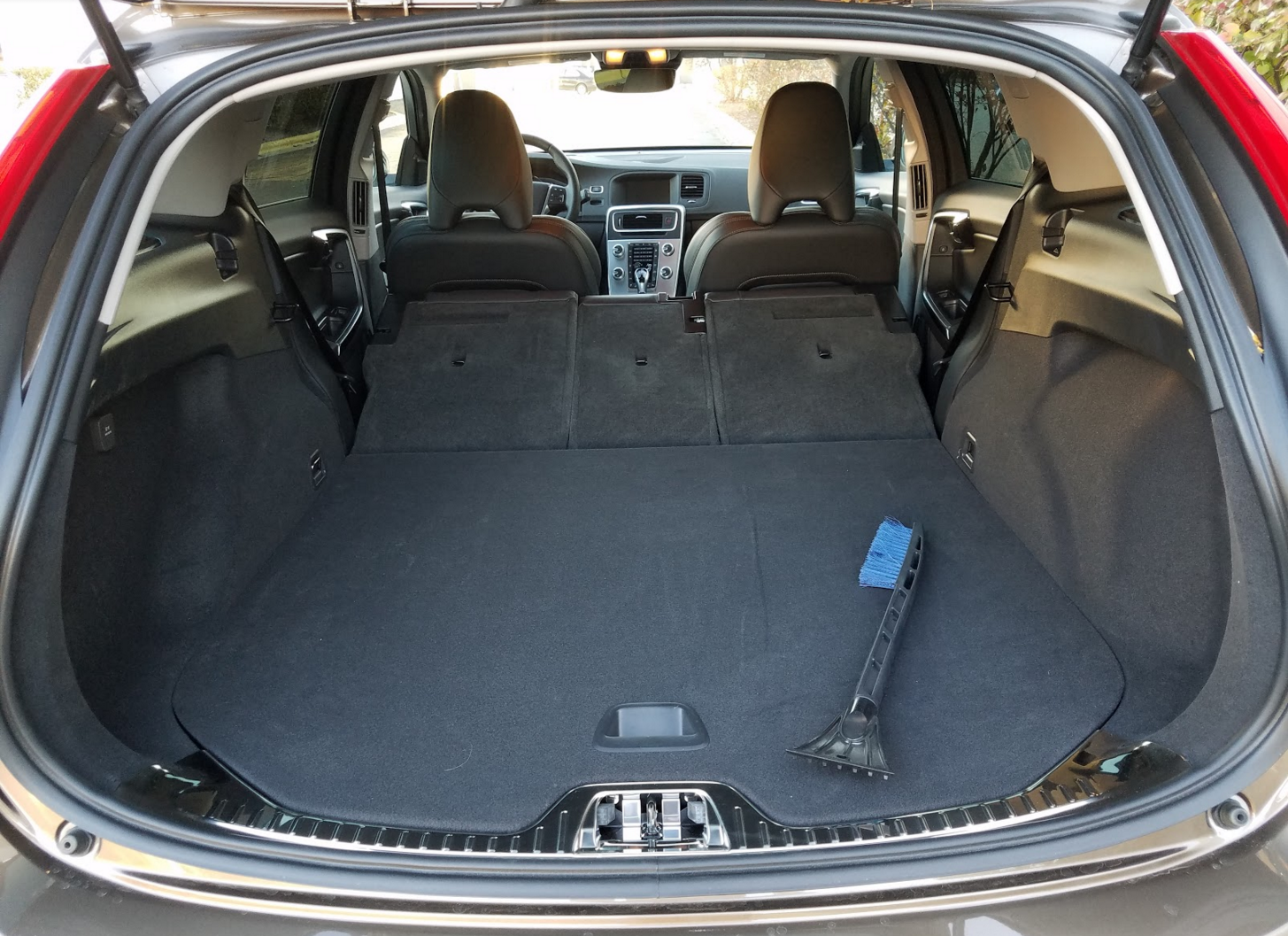 There’s a lot of cargo space in back, and the rear seat backs fold flush with the cargo floor (albeit at a bit of an upward angle).

Good rear cargo capacity expands greatly when the rear seats are folded. They drop absolutely flush with the cargo-floor surface, which is raised to bumper height—a feature ordinarily associated with SUVs. The folding center section of the rear seat can serve as a pass-through for long, narrow items like skis. Meanwhile, cabin storage gets a mixed review. The glove box is decently sized but the console box with auxiliary and USB ports is small, as are pockets in the doors. There are two covered cup holders in the console, and two more in the rear pull-down center armrest. Rear passengers can avail themselves of pouches affixed to the backs of the front seats.

You can’t say Volvo isn’t thorough with its coverage of the station wagon market, with practically every contingency covered for folks who want the added capability of all-wheel drive in some form. If there truly is a space between the V60 with AWD and the XC60 crossover SUV, then the V60 Cross Country fills that gap.

With its raised (by 2.5 inches) ride height, the V60 Cross Country sits between Volvo’s standard V60 wagon and its XC60 midsize crossover SUV, making it sort of a “crossover wagon.”