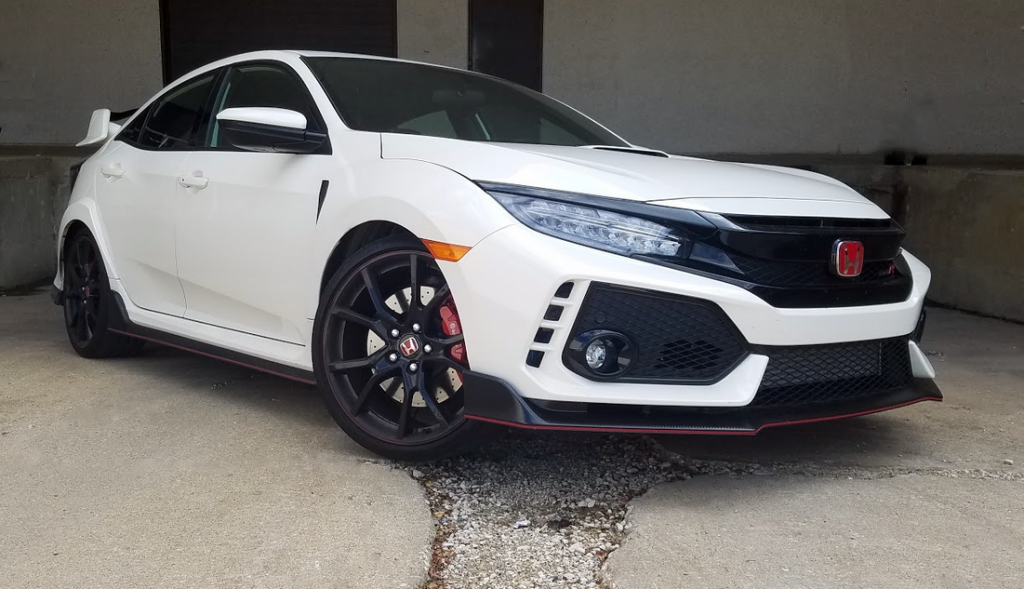 The great: Incredible, racetrack-ready performance in a practical hatchback package

The good: Respectable ride quality and refinement for a track-focused high-performance car

The not so good: Wild bodywork add-ons are too ostentatious for some shoppers

Check out the entire Civic lineup

I must admit I felt very… conspicuous as a middle-aged man dropping my kids off at school in our Honda Civic Type R test vehicle. Honda representatives are quick to point out that all of the Type R’s scoops, spoilers, flares, and pipes serve a purpose, be it engine/brake cooling, aerodynamic downforce and drag reduction, or exhaust-sound tuning—it’s all form following function. Still, this car screams “boy racer.” 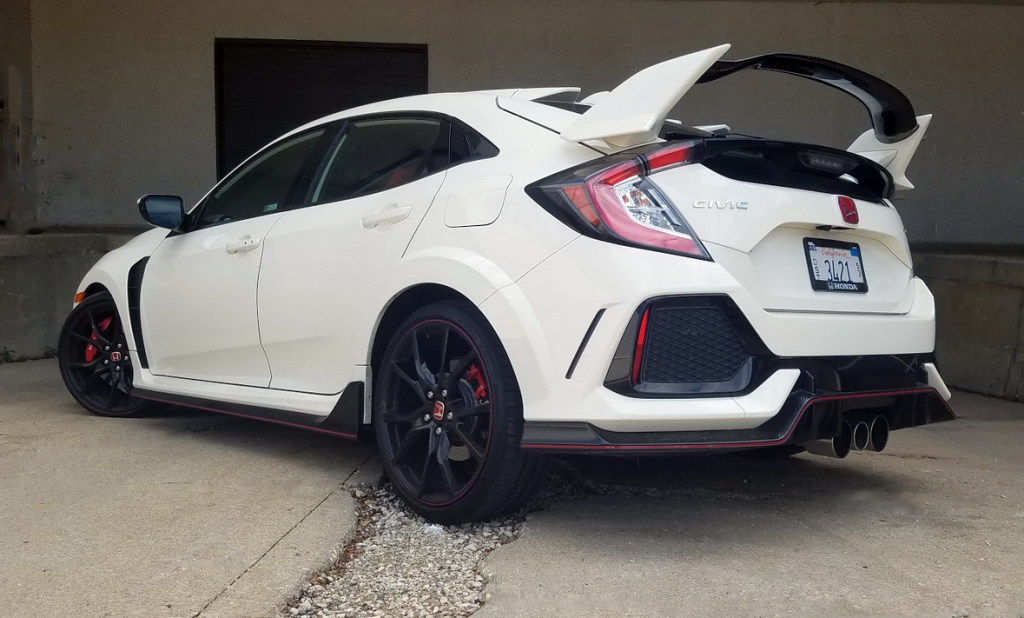 The Type R is the ultimate performance version of the Honda Civic, and it’s only available on the hatchback body style.

However, any reservations I had about the Type R’s looks melted away right quick after I got behind the wheel. This is a rip-roaring machine that delivers astonishing performance while maintaining a respectable level of civility in everyday driving.

When trundling around town in normal traffic, the Type R feels like a Civic Touring with higher NVH levels all around. The noise levels will be perfectly tolerable to performance-car fans, but unsettling if you’re used to Lexus-like levels of quiet and serenity. I think I heard the tinkle and tang from every little pebble the sticky high-performance tires kicked up into the fender wells, and out on the highway, the road roar is pronounced. The ride quality is expectedly taut, but surprisingly compliant over minor bumps… even in the aggressive +R mode setting. It’s much more pleasant than, say, a Subaru WRX STI.

The Type R’s cabin has the expected high-performance add-ons, and it’s quite well equipped as well–a navigation system and upscale Touring-level trim elements are standard. The sport front bucket seats and their grippy faux-suede upholstery offer a fine mix of comfort and support. The aluminum shift knob gets hot to the touch in direct sunlight.

Similarly, the heavily bolstered front sport seats are much more comfortable than they look. They were a near-perfect fit for me, providing good support in fast cornering without being confining. The shifter is excellent, but the aluminum shift knob can get scorchingly hot in direct sunlight… maybe a good excuse to pick up a pair of driving gloves?

The Type R’s racy modifications don’t compromise the basic Civic hatchback’s excellent cargo-carrying utility. There’s 25.7 cubic feet of space behind the rear seats, and 46.2 cu. ft. with the rear seats folded. The clever retractable cargo cover pulls out from the driver’s side of the cargo area, so there’s nothing to remove when you want to fold the rear seats.

My primary complaints with the Type R’s interior are issues with the Civic in general. The Civic’s infotainment system isn’t as nicely laid out as some class competitors; the main annoyances are a lack of a volume knob (instead, there is a tedious, touch-sensitive “slider” control) and somewhat dated navigation-map graphics. And, the Type R’s fancy faux-suede upholstery accent can’t cover up the uncomfortable seam in the sliding center console at the exact spot that I rest my right elbow.

Brembo brakes and 20-inch alloy wheels on low-profile tires are standard equipment. The smaller center pipe of the unusual triple-outlet exhaust uses a separate resonator to create a sportier growl at lower speeds, and it works with the outer pipes to avoid unpleasant droning sounds in high-speed crusing.

The Type R’s turbocharged 2.0-liter 4-cylinder is no low-end torque monster—you won’t be rocketing away from stoplights like you can in a Ford Mustang GT—but wind the tachometer near its 7000-rpm redline, and the Type R turns into a truly ferocious beast. It takes a sec for the boost to arrive, but when it does, the surge of acceleration is quite a… well, rush.

That rush is laudably manageable too. Three-hundred-six horsepower and 295 pound-feet of torque is a lot to be funneling to the ground solely via the front wheels, but the Type R handles it quite well—torque steer is pretty much a non-issue, and cornering grip is tenacious too. This is one of the most agile, racetrack-ready front-wheel-drive cars I’ve ever driven. 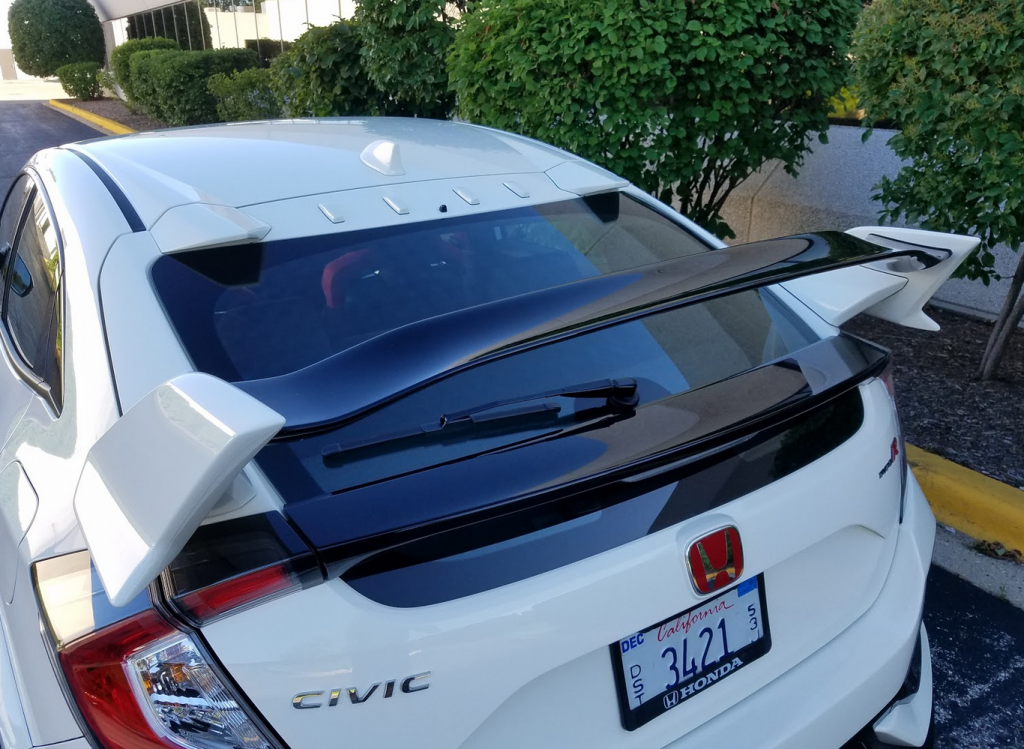 The plus-sized wing towers over the rear hatch, but thankfully it doesn’t impede rear visibility as much as you might think; the primary sightline is actually underneath the wing. Vortex generators above the rear window improve airflow.

The short-throw shifter and smooth, progressive clutch feel are excellent. Plus, the automatic rev-matching feature on downshifts—where the engine automatically “blips” the throttle for smoother operation when the driver downshifts to a lower gear—is a delight. This car is better at heel-and-toe shifting than I could ever hope to be. (You can turn this feature off if you want to do your own rev matching.)

At about $35K in its well-equipped mono-spec form, the Civic Type R occupies an interesting price point among factory-hot-rodded compact cars… it’s well above the cost of a Ford Focus ST, Hyundai Elantra Sport, or Volkswagen Golf GTI, but significantly cheaper than the Ford Focus RS, Subaru WRX STI, and Volkswagen Golf R—those last three are all-wheel drive, and can easily crest the $40K mark when optioned up.

The Civic Type R might not match the absolute grip of those AWD rivals, but it offers surprisingly similar performance overall—the 350-hp Focus RS is the only one of the trio that could consistently edge out a Type R on a road course or drag strip. And of those pricier competitors, only the luxuriously trimmed VW Golf R matches or bests the Type R in terms of day-to-day livability and practicality.

Who knew a hot-rodded compact hatchback could be so seemingly juvenile, and so finely honed and sophisticated at the same time?

Like Damon, I’m duly impressed by how livable the Civic Type R is. This is a real have-your-cake-and-eat-it car for people whose needs don’t stop at speed.

In the Type R, hatchback utility is augmented by a solid roster of the kinds of things people like in a car. Comforts and conveniences include automatic LED headlights, push-button starting, dual-zone automatic climate control, 60/40 split-fold rear seats, and a cargo cover. The 12-speaker audio system has HD and satellite radio, and is part of a voice-responsive infotainment complex with navigation, Bluetooth connectivity, and Apple CarPlay/Android Auto smartphone integration. 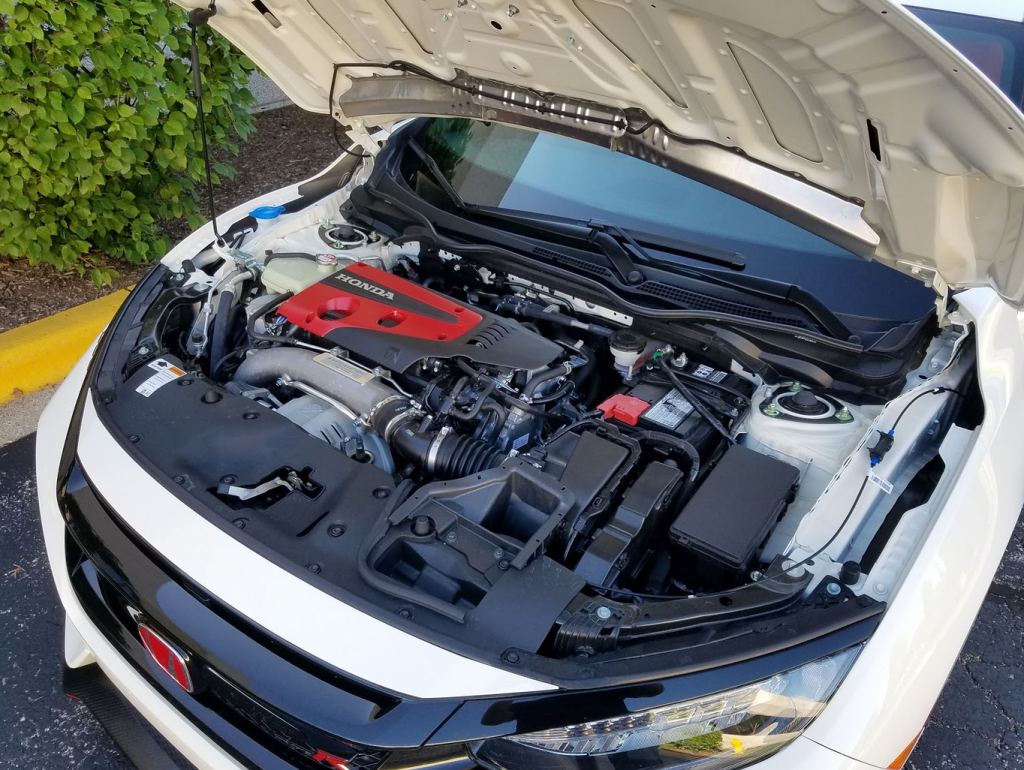 The Type R is powered by a turbocharged 2.0-liter 4-cylinder that pumps out an impressive 306 horsepower. A six-speed manual is the lone transmission.

Still, you can’t have everything they say, and the Type R proves that too. The driver’s seat is adjustable, including for height, but you’ll have to do it all by hand. (We hear the Volkswagen owners in the crowd saying, “You’ll get used to it.”) Also, this is one Civic without Honda Sensing safety technology: forward collision warning, lane-departure warning, collision-mitigation braking, and road-departure mitigation.

The speedy part of the equation isn’t confined to the turbo 2.0-liter and the aerodynamic origami. There’s a limited-slip differential, and fat low-profile high-performance tires are mounted on spidery 20-inch alloy wheels.

Noise levels are quite tolerable for the performance-car class. If over-the-shoulder visibility suffers at the rear corners, it has nothing to do with the car being a Type R and everything to do with it being a Civic hatchback. That big wing out back? You won’t see it in the mirror—the bigger distraction is the taillamp bar that runs horizontally through the rear view. Noodling around for 169.7 miles with a slight bias toward city-type driving, I averaged 19.97 mpg, quite a bit short of the EPA mileage projections of 22 mpg in the city, 28 on the highway, and 25 combined.

You’ll have to be careful to not get too close to parking bumpers with the low air-splitter nose, and Honda is adamant about the tires being as seasonal as a bikini and flip-flops. On balance, though, this is a car that can really go, or just go for groceries.