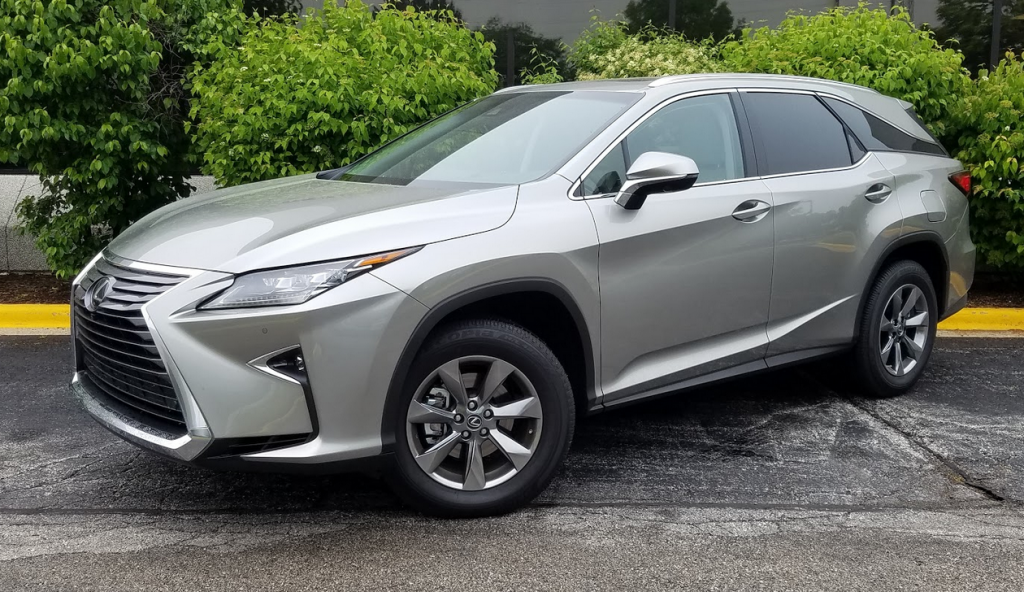 The not so good: Third-row seat is cramped and difficult to access

If you’ve been longing for a midsize Lexus sport-utility vehicle with 3-row seating, pine no more. Your long wait is over. For 2018 Lexus adds 350L and 450hL models to the popular RX family, and in the event that we’ve been too subtle, the “L” stands for long.

The various RX Ls are stretched 4.3 inches over the standard-length RXs to make room for the third row (though wheelbase remains the same 109.8 inches). The extended models also have a less rakish liftgate-window angle, which provides adequate headroom for third-row passengers. Too bad it can’t do much for their legroom.

Depending on the seating choice, long-body RXs can hold six or seven passengers. The hybrid-power 450hL comes with second-row captain’s chairs for 6-place seating and pass-through access to the back row. The gas-V6 350L has a standard middle-row bench seat with room for an additional passenger—though the captain’s chairs are available.

Consumer Guide® tested an Atomic Silver front-wheel-drive 350L, which has a base price of $48,665 with delivery. That puts it at $4400 more than a similarly motivated 5-passenger RX. Opting for all-wheel-drive raises the price by $1400. (The 450h comes only with AWD.) 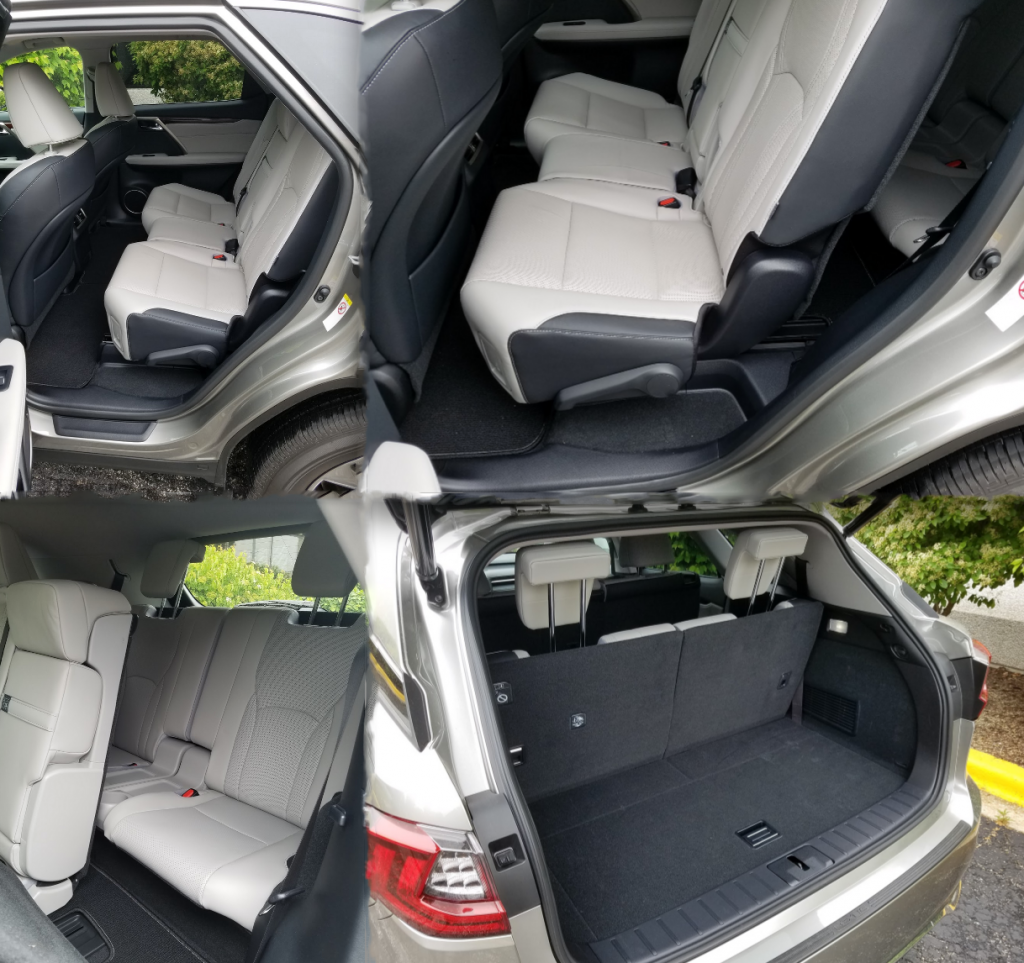 As its name implies, the RX L is longer than its RX siblings, but the stretch is only aft of the rear wheels. The wheelbase  and the rear door apertures stay the same, which makes for an especially cramped passageway to the third-row seats, which themselves offer very little in the way of legroom (even when the second-row seats are slid forward). The third row is best suited for small children. There’s 7.4 cubic feet of cargo space behind the third-row seats.

The 40/20/40 split-folding bench slides forward to enable access to the third row, but even then the resulting passage isn’t large enough to make that trip easy. Middle-row seats are positioned slightly higher than those in the back row, which creates a bit more foot space for third-row passengers. Still, third-row 50/50 seats are for kids only, especially if second-row passengers need true adult legroom—which is available. Middle seats recline and slide for added comfort, and three chummy adults could occupy the second row if necessary, thanks in part to a minimal floor tunnel.

When all seats are raised, rear cargo area is limited, though the L’s more upright roof/tailgate design opens the way to taller load stacking than in the 5-seat RX. (A bin under the load floor secures the roll-up cargo cover when not in use.) However, even with the third-row seats down the area is not all that cavernous. Seats raise or retract—slowly—via power buttons placed on the left side of the cargo hold or just inside the back edge of the rear door openings. For truly ample cargo space, the second row has to be folded as well—a task made easier with convenient release levers in the right sidewall of the cargo bay. These seats retract at an angle that rises toward the front of the vehicle but at least the transition back to the rear cargo floor is essentially uninterrupted by large gaps or offsets. The test truck was equipped with an extra-cost hands-free power liftgate.

The RX L’s power-folding third-row seats can be operated via buttons on the left wall of the rear cargo area, which also includes a flip-out bag hook. With the second- and third rows folded, the RX L has 58.5 cubic feet of cargo volume. 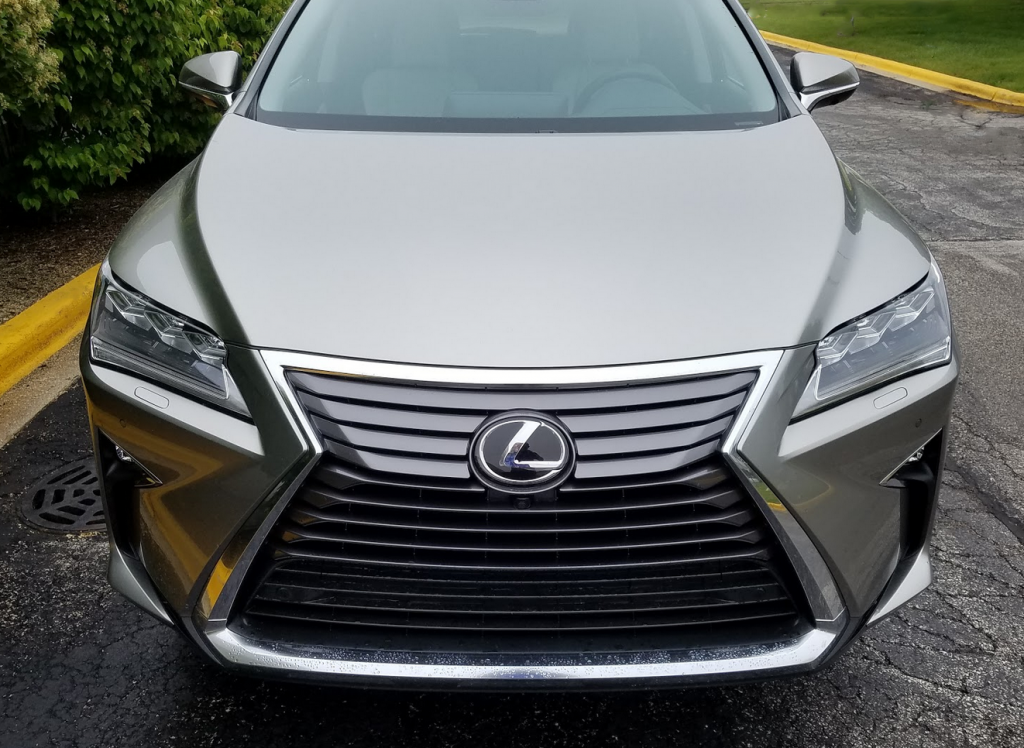 The RX L wears the same aggressive styling as its regular-length kin.

Driving controls are easy to see, reach, and operate for the most part. The caveat is that the navigation and entertainment systems in the upgraded audio option are controlled by Lexus’ Remote Touch infotainment interface. It has a mouselike knob on the console that allows drivers to remotely click on virtual buttons for the tasks they want to carry out. The screen presents numerous choices, and having the dexterity to effectively locate and activate the desired selection—particularly in a moving vehicle—draws some driver attention better spent monitoring the road ahead. Climate controls use a separate bank of numerous buttons, including repetitive-push temperature buttons. There are separate climate controls that third-row occupants can operate for themselves.

Good cabin storage includes a pretty big glove box, a generous covered console box with a power point and auxiliary/USB inputs, long pockets in the front doors, a small open bin ahead of the shifter, a pull-out tray to the left of the steering wheel, and a floor-level bin on the passenger side of the transmission hump. Second-row storage lists small door bins, pouches on the backs of the front seats, a small open space in the back of the console, and a covered bin and pop-up cup holders in the pull-down center armrest. Two open cup holders serve front passengers, and one has a bottom that can be depressed to make more room for taller cups. There are also two cup holders molded into the center section of the third-row seats.

RX L powertrains match those of their more diminutive kin. In the 350, that means a 3.5-liter V6 and 8-speed automatic transmission. A selector dial on the console enables the RX to be operated in either “Normal,” “Sport,” or “ECO” mode. Sport improves throttle response from the 290-horsepower engine, and it raises the level of steering feel, albeit not all that drastically. As such, acceleration is adequate for the class, but hardly thrilling. ECO tones down power output and climate settings to save some fuel. At 19 mpg in the city, 26 mpg on the highway, and 22 combined, the front-drive RX 350L’s EPA fuel-economy ratings are each one mpg lower than its short-body counterpart. This driver averaged 21.2 mpg in the test vehicle after a stint of 176 miles that included 45 percent city-type operation.

The test vehicle’s ride was fairly cushy. With the standard 18-inch wheels and tires and the fully independent suspension, it covered bumps with little shock or noise. Handling is a little less satisfying, with hard-to-ignore body roll around corners.

With the RX L, Lexus enables one of its most successful vehicles to cover more of its market slot. That’s the long and short of it.