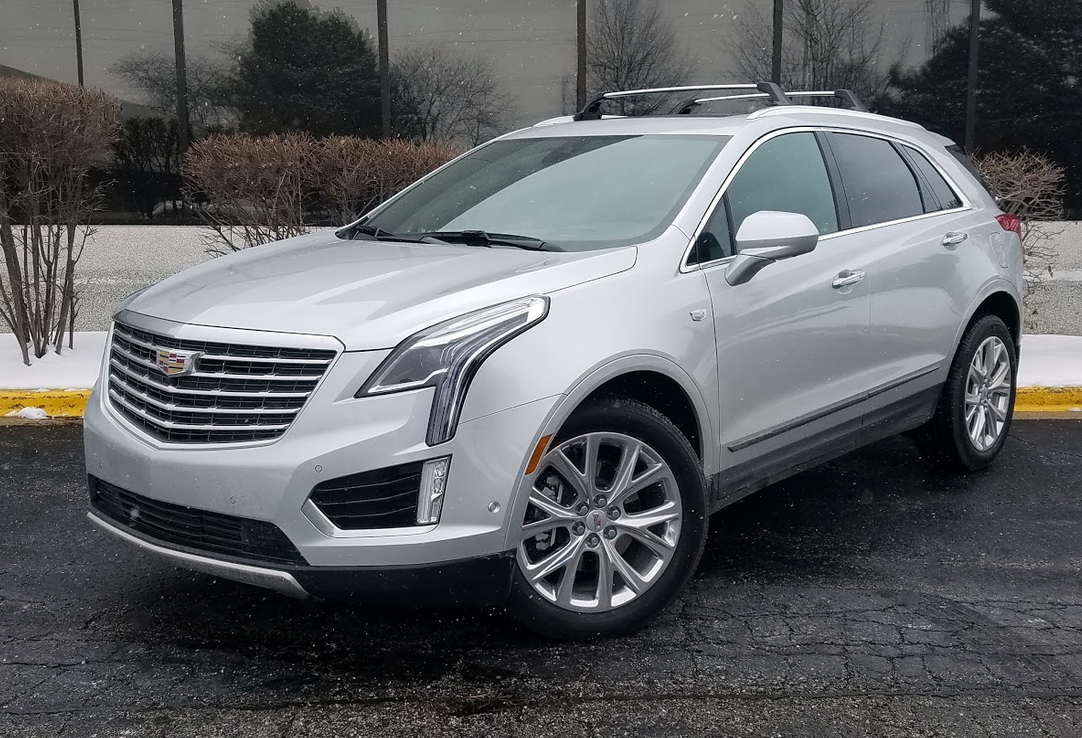 The not so good: Driving personality isn’t as dynamic as some class competitors

As far as Cadillac is concerned, for midsize sport-utility vehicles it’s out with the old and in with the new for 2017. The new is the XT5 that steps into the space formerly occupied by the SRX, which has been the brand’s best-selling vehicle in recent years.

In an effort to top what was apparently working, Cadillac is hoping to lure buyers with better fuel economy, more tech features, and a bit more rear-seat room in a package that’s still pretty much the size of the SRX overall. The XT5 comes in four trim levels: front-wheel-drive base, front- or all-wheel-drive Luxury and Premium Luxury, and AWD Platinum. Consumer Guide® tested a Platinum that, with options and delivery, slid in a hair’s breadth under $70,000. 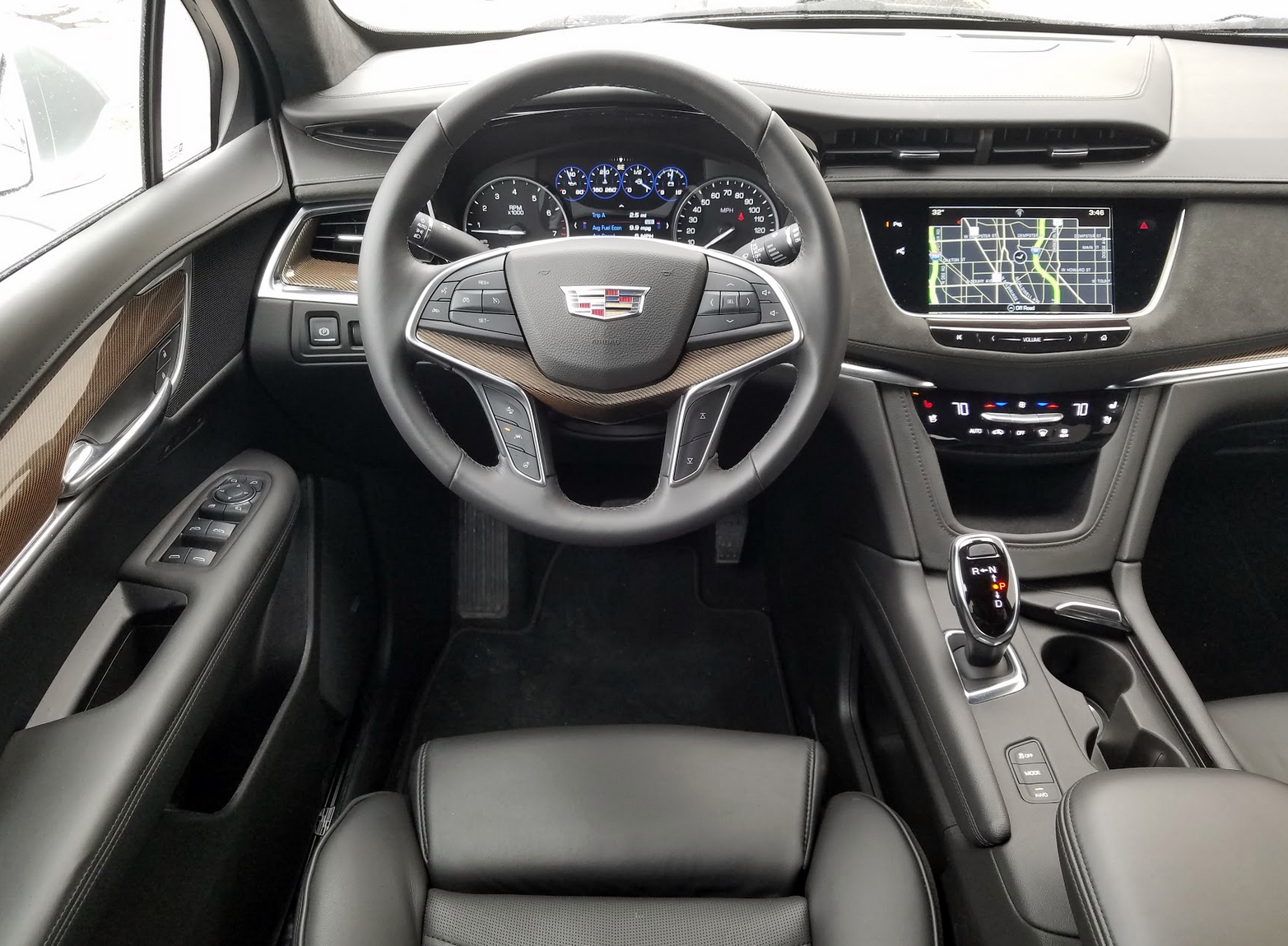 Like the SRX, the XT5 comes with a 3.6-liter V6 engine but it has been changed. At 310 horsepower it is minimally more powerful than before—a gain of just two ponies. The real change is in fuel-saving technology, with the additions of an automatic start/stop feature at idle and cylinder deactivation when the powerplant isn’t heavily stressed. Plus, it mates to an 8-speed automatic transmission that replaces the SRX’s 6-speed unit. Then, too, the XT5 weighs a bit less than its predecessor. As a result, AWD models like the test vehicle are rated by the EPA at an estimated 18 mpg in the city and 26 mpg on the highway. (Respective figures in 2016 were 16 and 23.) This reviewer averaged 18.4 mpg after putting 134 miles on the truck, 70 percent of that under city-type conditions.

Acceleration isn’t startling but it’s almost always satisfying. The cooperative 8-gear autobox helps to keep the power fairly linear, too. As a bonus, powerteam operation is very quiet—just what you’d expect from a luxury brand. The AWD system is capable of directing all available power to either the front or rear axle, and the driver can select front-wheel-drive mode in pursuit of fuel economy. Electronic controls for the rear differential can route up to 100 percent of available power to either rear wheel for better slick-surface traction.

The XT5 incorporates a real-time-damping suspension designed to evaluate road conditions and vehicle inputs in pursuit of ride smoothness. Furthermore, Premium Luxury and Platinum models have a push-button “Driver Select” system with “Touring,” “Snow/AWD,” and “Sport” modes. Touring is cushy enough without getting carried away into spongy territory. Driving dynamics firm up a bit in Sport, and deliver a nice feeling of control without a drastic penalty in ride comfort—this tester actually slightly preferred it to Touring for normal expressway commuting. It probably doesn’t hurt ride quality that the XT5’s wheelbase is two inches longer than the span under the old SRX. 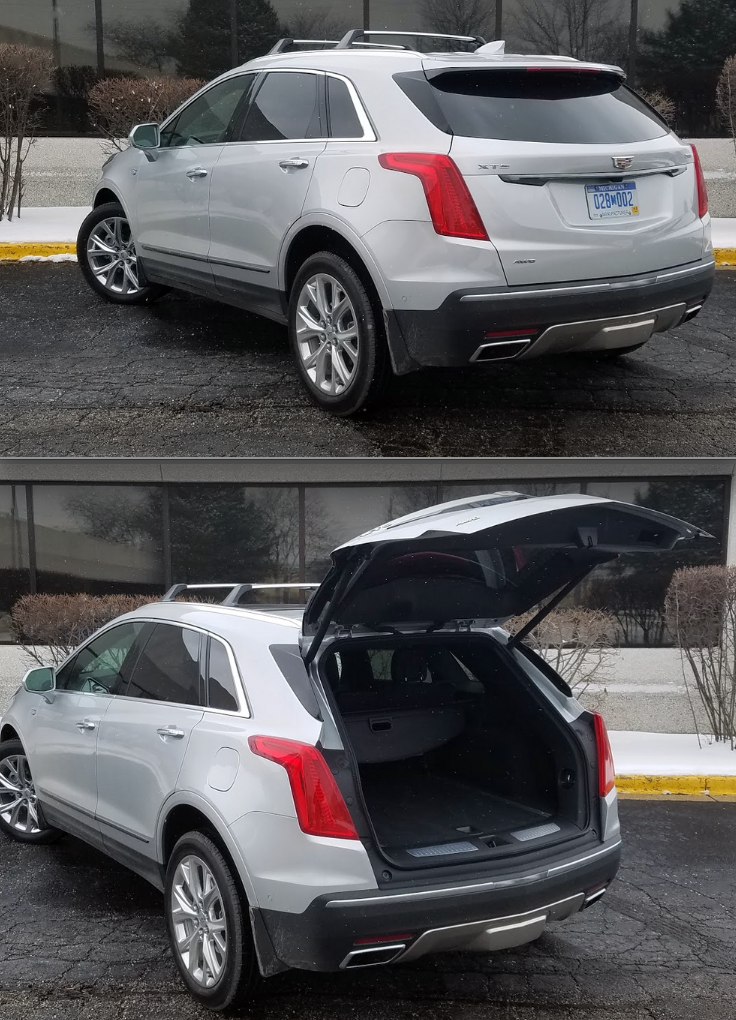 Though its load floor is a bit higher than some rivals, the XT5’s rear cargo area is nicely finished and spacious for a two-row midsize luxury SUV.

That extra space between the wheel centers also contributes to 3.2 more inches of rear-seat legroom than its predecessor had. Three-across seating is possible in back thanks to a nearly flat floor, but if those three are adults, they’ll probably have to be on the skinny side. Front-seat legroom is ample. Headroom is very good in front but just good in back—taller passengers may feel a bit hemmed in. Thick rear roof pillars obstruct over-the-shoulder vision.

Platinums come equipped with comfy semi-aniline leather seats; an instrument panel, doors, and armrest wrapped in leather; and microsuede headliner material. All in all, this combination makes for a rich-looking and well-put-together cabin. Standard driving controls in the top-level model include a configurable 8-inch color gauge cluster and head-up display. Cadillac’s CUE infotainment system manages audio and navigation on an 8-inch touchscreen that’s easier to manipulate than the central-controller systems with which many other luxury bands have become besotted. Still, setting up audio presets is a bit of work. The Platinum’s tri-zone automatic climate control uses toggle switches to do things like set temperature and fan speed. When you start working these controls, climate-setting feedback shows up on the CUE screen but it doesn’t stay on long—you either have to be quick, or start the process again, which can be time- and attention-consuming.

As for interior-storage space, there’s a big glove box but it is positioned low enough that it might bump up against a front passenger’s knees when open. In addition, there is a small console box and small pockets in each door. Storage pouches are attached to the back of each front seat. A pair of covered cup holders is located in the console, and two more drink receptacles are molded into the armrest that pulls down from the middle of the rear seats.

The manually adjustable rear seats are divided in a 60/40 split and fold fully flat to extend what’s a nice-sized cargo area to begin with. One pleasant standard touch is an easily adjustable “cargo fence” on parallel tracks that can be used to keep items from sliding around. A hands-free power liftgate is included in Platinums. It’s supposed to work by waving a foot under the bumper while in possession of the key fob but it wouldn’t do so for this driver. Perhaps he should buy a pair of tasseled loafers. 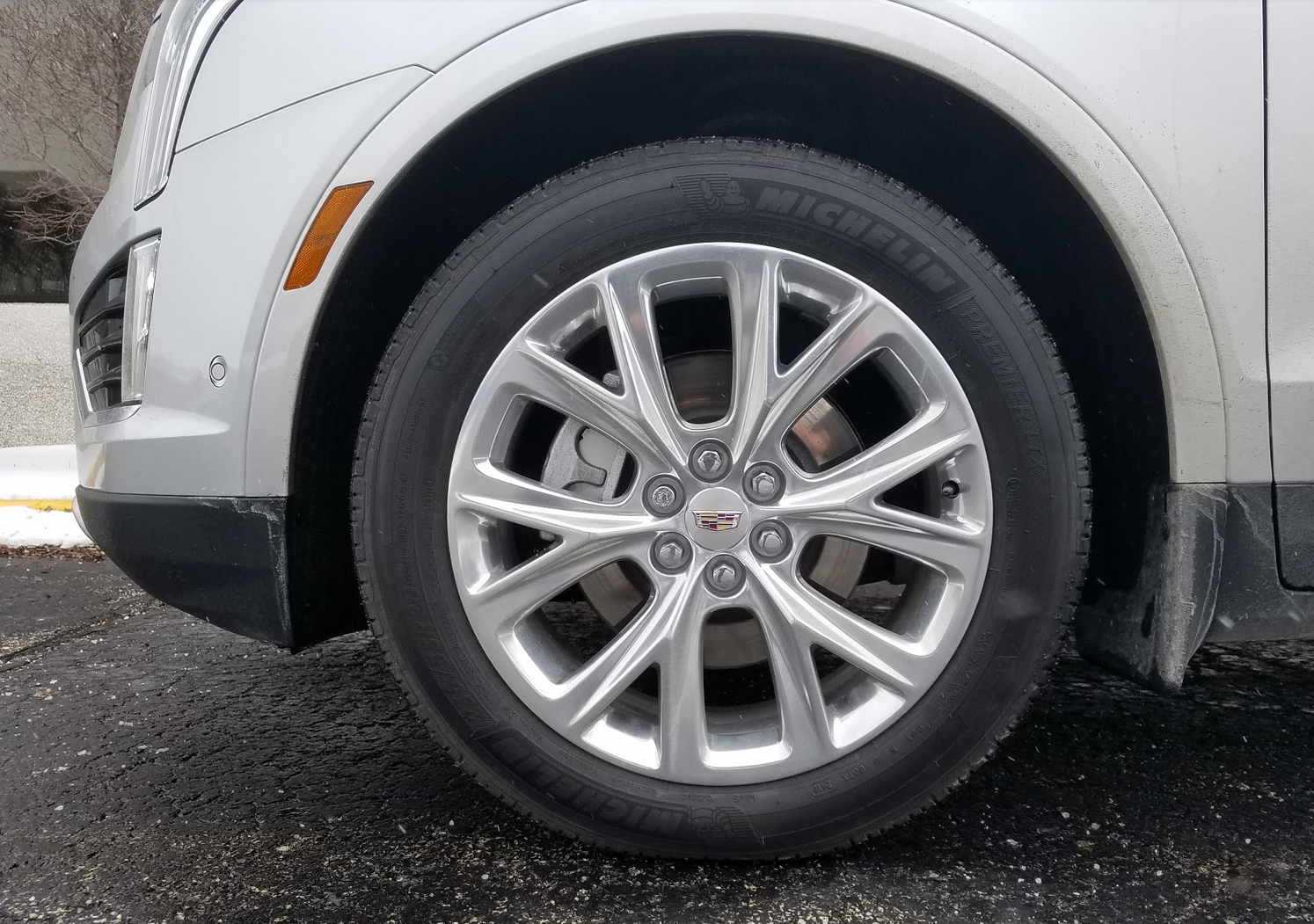 Twenty-inch polished alloy wheels tack on another $2095 to the bottom line.

The Cadillac XT5 is a supremely competent performer with an emphasis on comfort and technology over outright performance. That’s probably fine with a goodly number of potential customers. With plenty of trim and drivetrain choices from which to pick, most luxury SUV buyers ought to find an XT5 of some type that fits their needs and budget. 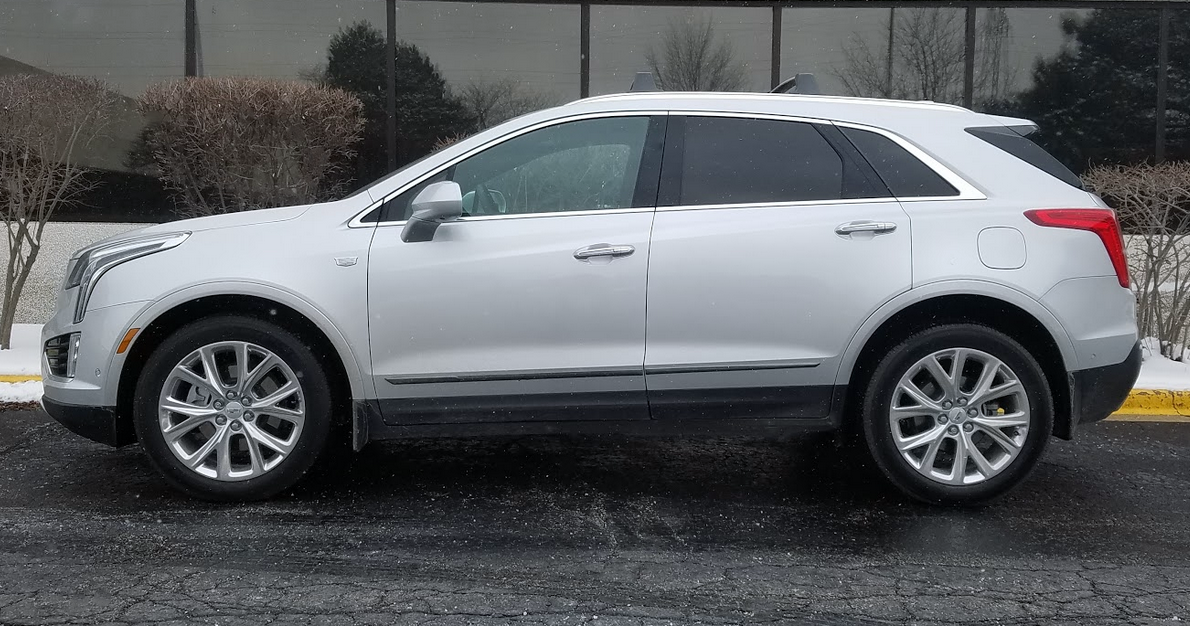 The XT5’s wheelbase is about two inches longer than its SRX predecessor, which improves rear-seat legroom.