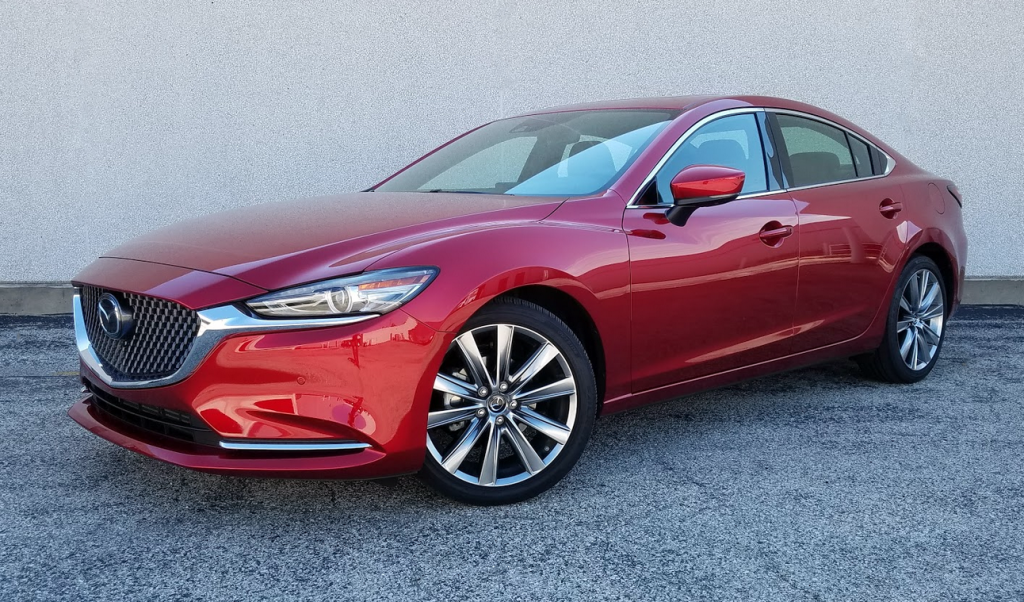 The good: Plenty of passenger space

The not so good: Disappointing fuel economy for a Mazda

A lot of automakers like to talk about continuous improvement of their products. For 2018, Mazda shows them how it’s done with the midsize 6 sedan.

While not enough of a revamp to consider it a whole new generation, what’s been done to the 6 is substantial. It addresses a few perceived shortcomings, even as it positions the car in some different territory. There’s a new engine choice, a redesigned interior, modified exterior styling, some new features, structural improvements, and reworked suspension geometry. 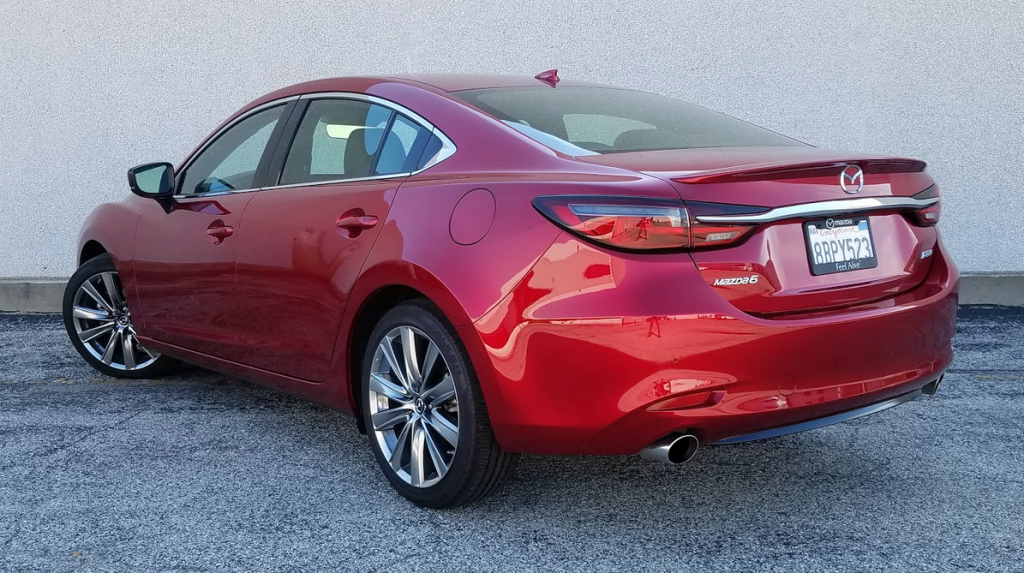 Exterior styling tweaks for 2018 are relatively minor. A more sculpted lower rear-bumper cover is one of the updates.

Mazda adds a pair of trim levels at the top end, the Grand Touring Reserve and the Signature. Consumer Guide® tested the latter, which sits at the pinnacle of pricing: $35,640 with delivery. A trio of individual options nudged the test car’s final price to $36,435.

Even for the class, the Mazda 6 offers generous amounts of space for front- and rear-seat passengers alike.

The 2.5-liter naturally aspirated 4-cylinder engine that had been the Mazda 6’s sole motivator is back (at 187 horsepower, a gain of three), but it is newly joined by a turbocharged variant that makes 250 horsepower on premium gasoline or 227 ponies on regular. The turbo mill is standard in Grand Touring, Grand Touring Reserve, and Signature models. The extra horsepower and 310 lb-ft of torque that peaks at 2000 rpm make the 6 feel pretty eager for what’s essentially a family sedan, and that’s true in most driving situations. 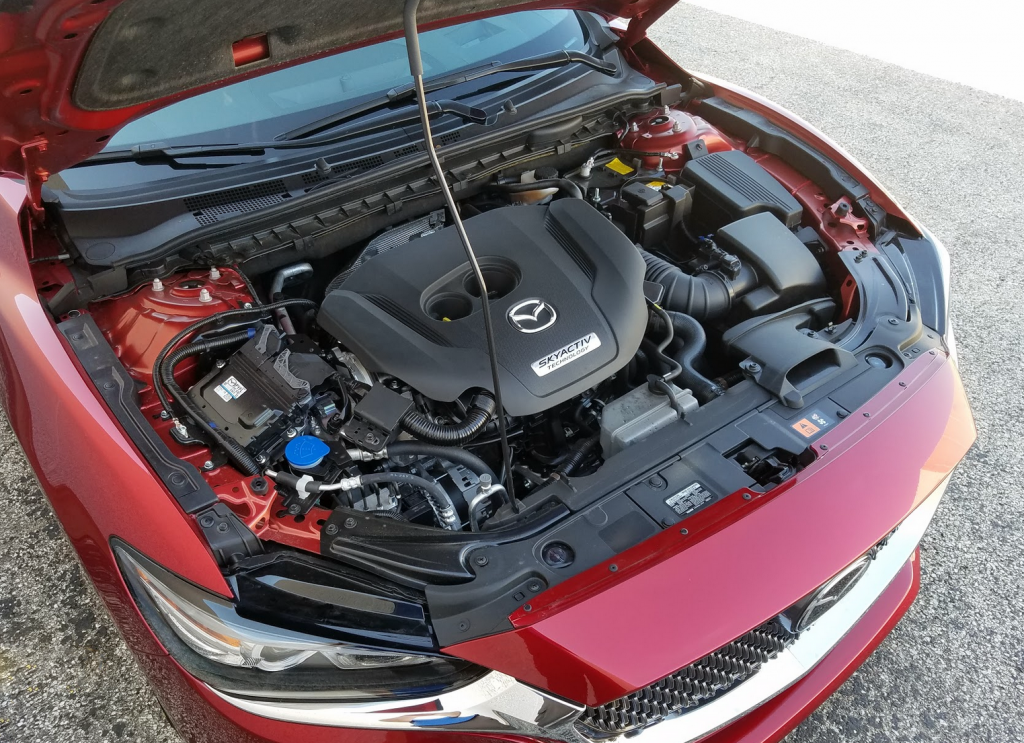 The Mazda 6 is available in five trim levels. Entry-level Sport and midline Touring models come with a 187-horsepower 2.5-liter four. New for 2018 is the 250-horsepower Skyactiv-G turbocharged 2.5-liter engine, which is standard in Grand Touring, Grand Touring Reserve, and Signature models.

The smoothly effective 6-speed automatic transmission standard on all models save the entry-level Sport (for which a 6-speed manual remains available) includes a “Sport” mode, activated by a switch on the console. It delays upshifts for a little better acceleration when necessary, though at the risk of some fuel economy. Drive-gear and final-drive ratios differ according to which engine is used. The EPA rates the turbo engine/automatic pairing at 23 mpg in city driving, 31 mpg on the highway, and 26 in combined use. In this driver’s 181-mile test composed of 75 percent city-type operation, the car averaged 23.5 mpg.

Ride and handling are continued bright spots as well. “G-Vectoring Control” that adjusts engine torque in response to steering inputs to improve handling and ride quality is standard in all models. CG has made note of the firmly tuned ride from the Mazda 6’s fully independent suspension in recent years, but the ’18 seems a bit more compliant.

The added models serve Mazda’s aim of positioning itself as a slightly upscale automaker with “class-above” refinements relative to other mainstream brands. The Signature displays a fairly sumptuous cabin—Audi-lite in this tester’s estimation. Nappa leather covers the comfortable seats, which are heated and ventilated in front, and heated in the rear. Padded surfaces abound on the redesigned instrument panel, all four doors, and the sides of the center console. Ultrasuede inserts dress up the dash and the door centers, and sections of sen wood heighten the premium look. 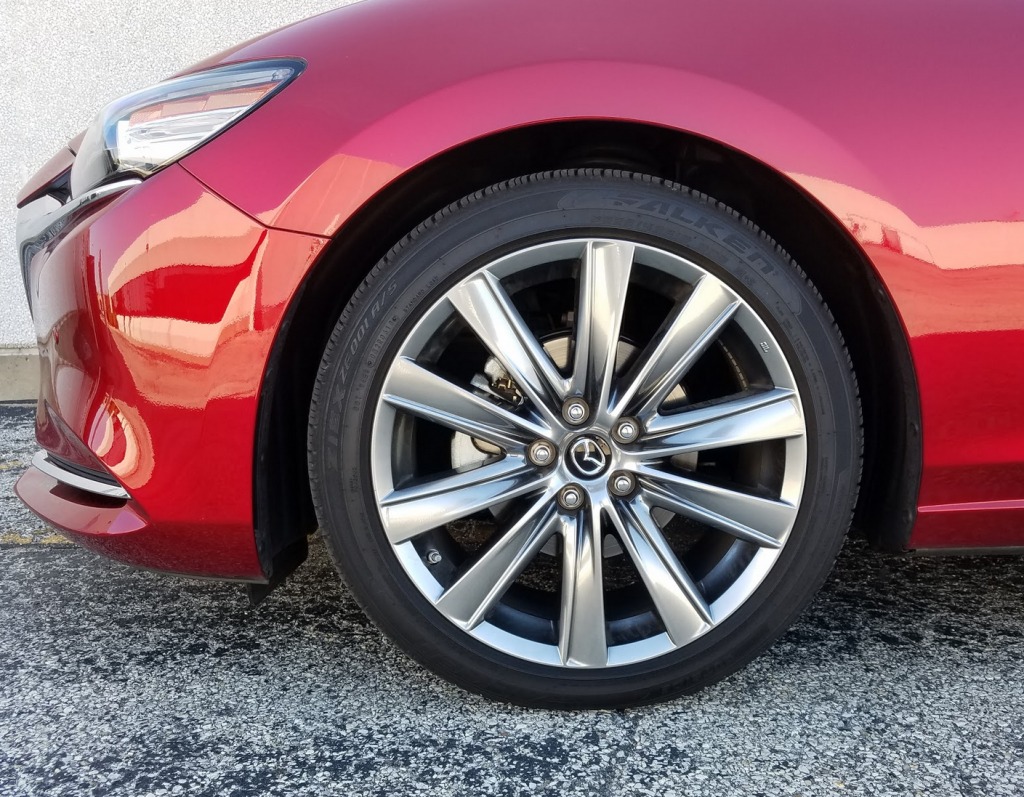 Climate controls use a pair of rotating dials to quickly and easily select temperatures, confining the need for less-convenient repetitive-push buttons to fan speed and mode. Unfortunately from our perspective, audio, navigation, communication, and other functions are managed through a console controller that requires some of the driver’s attention to operate, and sometimes complicates processes like audio selection that should be much easier.

With no fundamental changes to the 6’s shape or interior dimensions, it continues to provide good legroom in front and decent space in back. Headroom is in shorter supply in back than it is in front, and a sloping roofline that helps give the car its sharp looks requires rear occupants to do a little bobbing and weaving when entering or exiting. The rear seat effectively holds two adults. For personal-item storage there is a glove box, a modest cubby (with media-device inputs) under the center armrest, and an open bin ahead of the shifter. Front doors have pockets. Rear-seat storage comes down to a bottle holder in each door, pouches on the backs of the front seats, and a shallow covered space and USB port in the pull-down center armrest. The console has two cup holders that can be hidden under a retractable cover; two more drink receptacles are in the rear armrest. 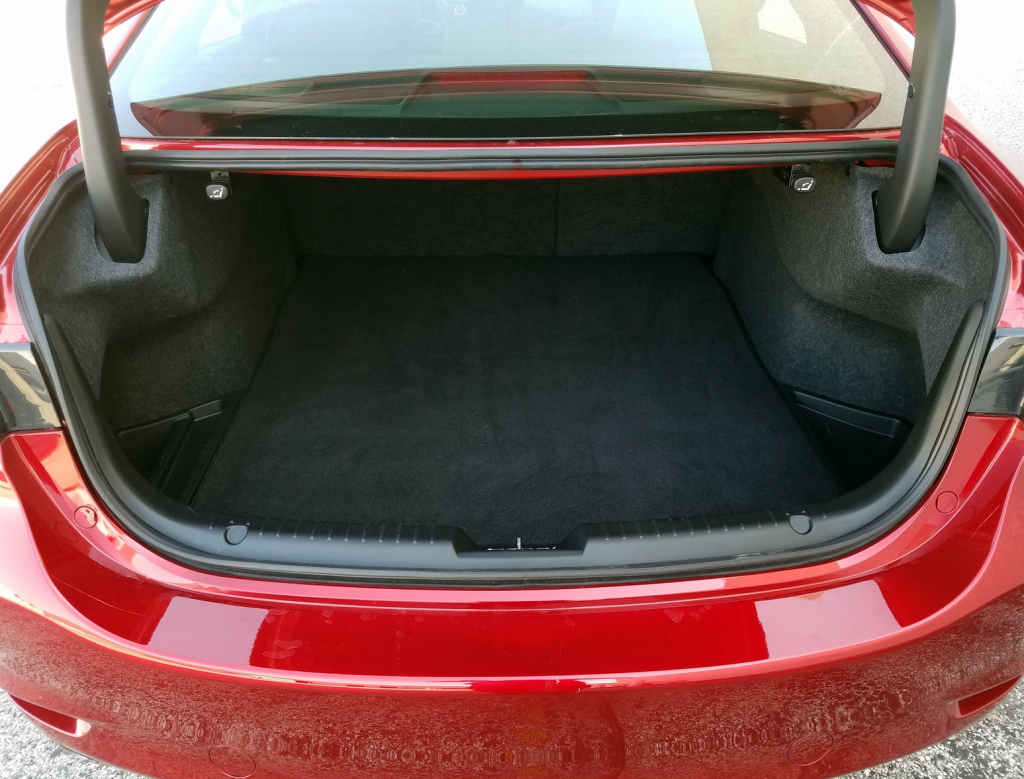 The car’s good trunk space is configured well. While there’s a substantial lip at bumper height, the load floor is long and flat, with bins to hold small items at the rear corners. The rear seats split in a 60/40 break, and fold nearly flat and flush with the trunk floor to deliver extra cargo capacity. The bulkhead behind the rear seat poses almost no impediment to loading long cargo, but when the seats are lowered, the large top latches that hold them in place when up are an exposed obstacle.

With increases in power and luxury for the 6, Mazda is clearly not content to leave well enough alone where its midsize sedan is concerned. Buyers in search of a car that’s useful while still being fun to drive ought to pay attention to it, too.

New for 2018 is the Signature trim level. The topline model boasts a standard turbocharged engine, as well as a number of luxury upgrades, including standard Nappa leather cabin trim.