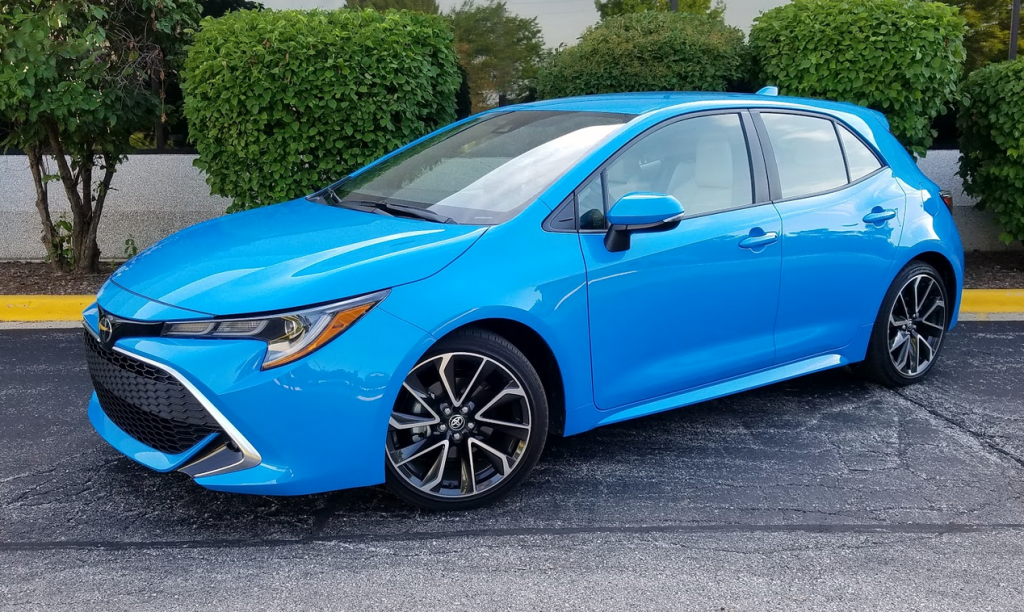 The good: Much-improved interior materials and design over previous Corollas

The not so good: Styling and overall layout emphasizes sporty looks over passenger and cargo room

You might think of the new Toyota Corolla Hatchback in terms of the butterfly. Its larva was the Scion iM, a compact 4-door hatchback introduced for that youth-trending brand’s final season in 2016. Then it entered a pupal stage as the Toyota Corolla iM. Now for 2019 it emerges from the cocoon fully redone and ready to take wing in a form of its own. 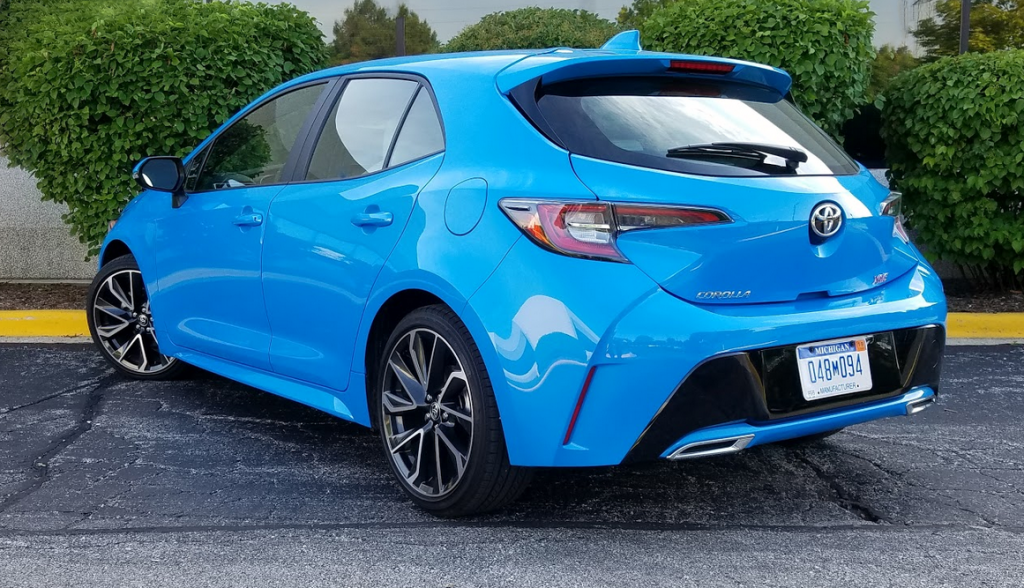 The new Corolla hatch is slightly lower, wider, and shorter than the iM it replaces, but it rides a 1.5-inch-longer wheelbase. There’s additional power from the 2.0-liter 4-cylinder engine that takes over for the outgoing car’s 1.8-liter four, and there are improvements to both available transmissions. Some additional convenience features and a choice of trim levels further distance the new Hatchback from the iM.

In terms of both design and materials, the Corolla Hatchback’s interior is a notable step up from the Corolla iM and the current Corolla sedan. Rear-seat space isn’t as generous as the Corolla sedan, but it is still class-competitive.

Butterflies are free, but the Corolla Hatchback SE costs $20,910 with delivery—competitive for the class—while the XSE starts at $23,910. Selecting the automatic continuously variable transmission (CVT) in place of the base 6-speed manual adds $1100. Consumer Guide tested an XSE with the CVT. 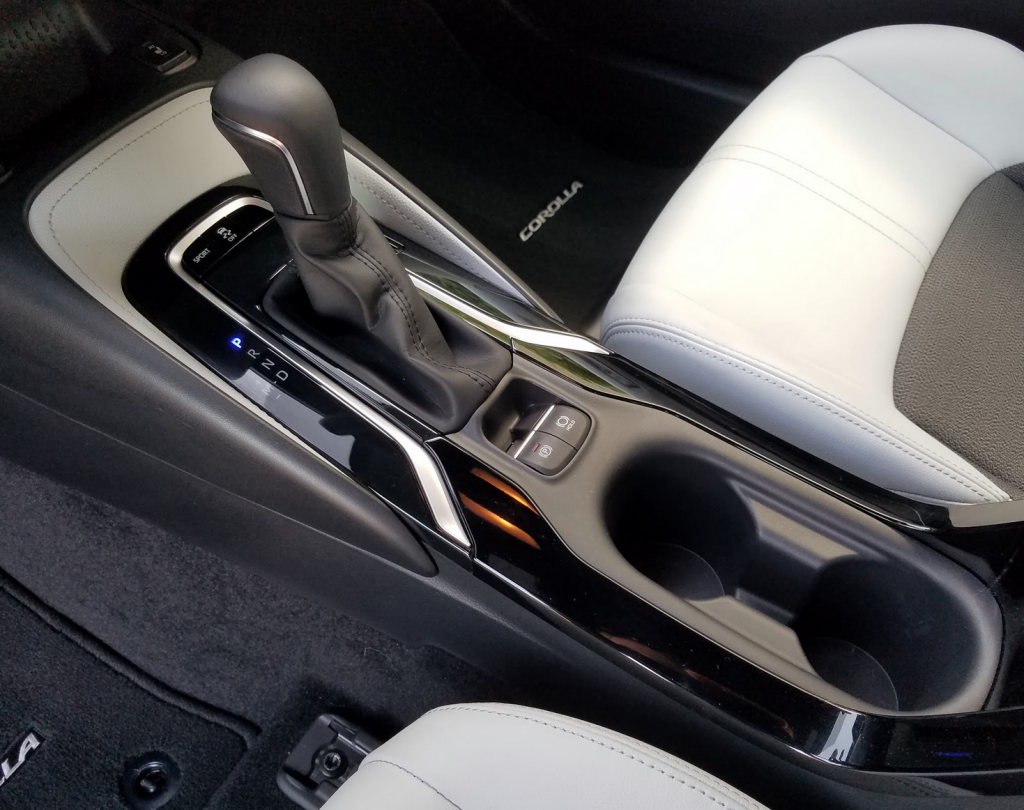 Selecting the available CVT transmission in place of the standard manual gearbox adds $1100 to the bottom line.

The 2.0-liter engine spins out 168 horsepower, 31 more than the 1.8 generated in predecessor iMs. It makes the Corolla Hatchback a livelier car, even with the CVT. Too often CVTs are thrill-killing devices that hinder rather than help acceleration, but this one includes a physical “Launch” gear set that behaves much like a low first gear. It helps the Corolla bolt from a stop, and it delivers kickdown to a lower ratio when zip for passing is necessary. “Sport” and “ECO” drive-mode settings are available to modify the driving experience—though this driver sensed no dramatic change in the car’s behavior when clicking into Sport. 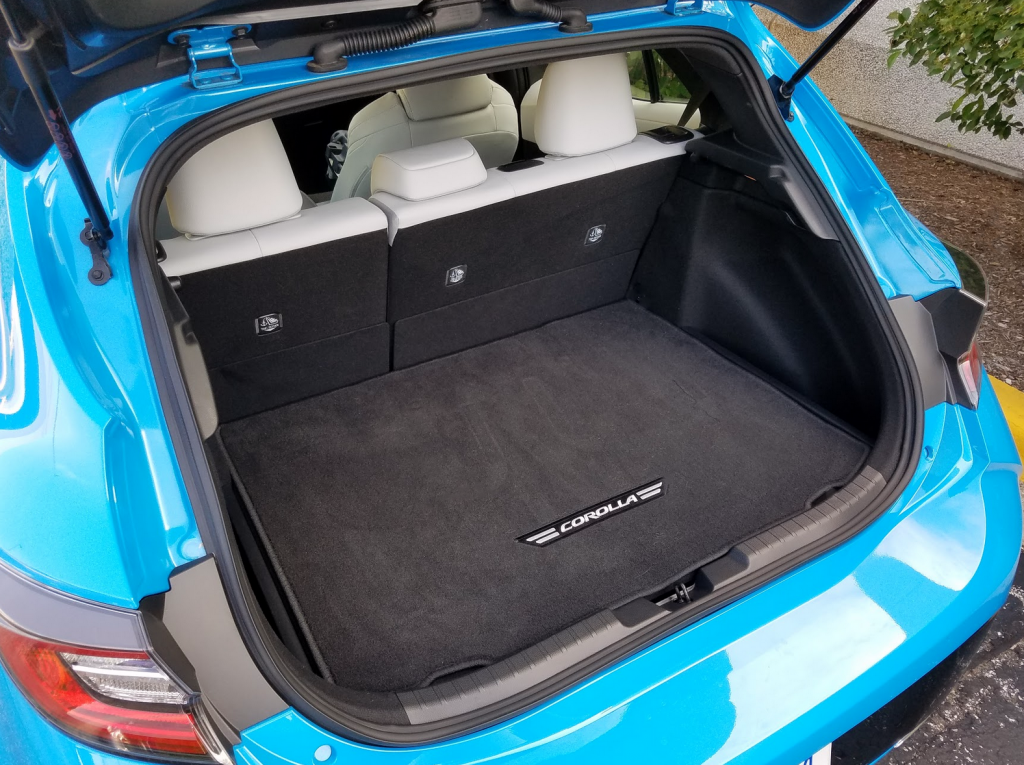 The XSE with automatic is rated by the EPA for 30 mpg in city driving, 38 mpg on the highway, and 33 combined. (The automatic SE is the mileage champ of the bunch with a rated 42 mpg in highway operation.) This reviewer put 235.2 miles on the car, 45 percent of it in city-type driving, and chalked up 35.2 mpg.

Steering is nicely responsive, and the XSE corners well without a lot of roll. Ride on the 103.9-inch wheelbase is well composed most of the time, but bumps, cracks, and roadwork pavement cuts often brought out cabin-jolting hits.

CG’s test car was a preproduction job that Toyota advised might not have been locked in for materials selection or build quality, but it did seem commendably put together. The vibrant Blue Flame exterior was complemented inside by extensive areas of very-light-gray material that contrasted with the black dash, lower door panels, carpet, and steering wheel. The centers of the leather-rimmed seats featured gray cloth on the cushions and seat backs. A wide band of padded material with exposed stitching ran through the middle of the instrument panel. The tops of the dash and the front doors were soft material with underlying give, too, but the plastic tops of the rear doors matched the fronts only for color and graining.

The virtual driving controls show up well, with management of the vehicle-info readouts accomplished by buttons on the steering wheel. Audio controls include volume and tuning knobs, and 8 function buttons along the sides of the 8-inch touchscreen. The system is easy to reach and use. XSE climate controls have convenient temperature dials, one at each end of the control panel. However, the rest of the controls require repeated pushes on lookalike buttons arrayed on a strip with function icons that aren’t easy to read at a glance, especially while wearing sunglasses. 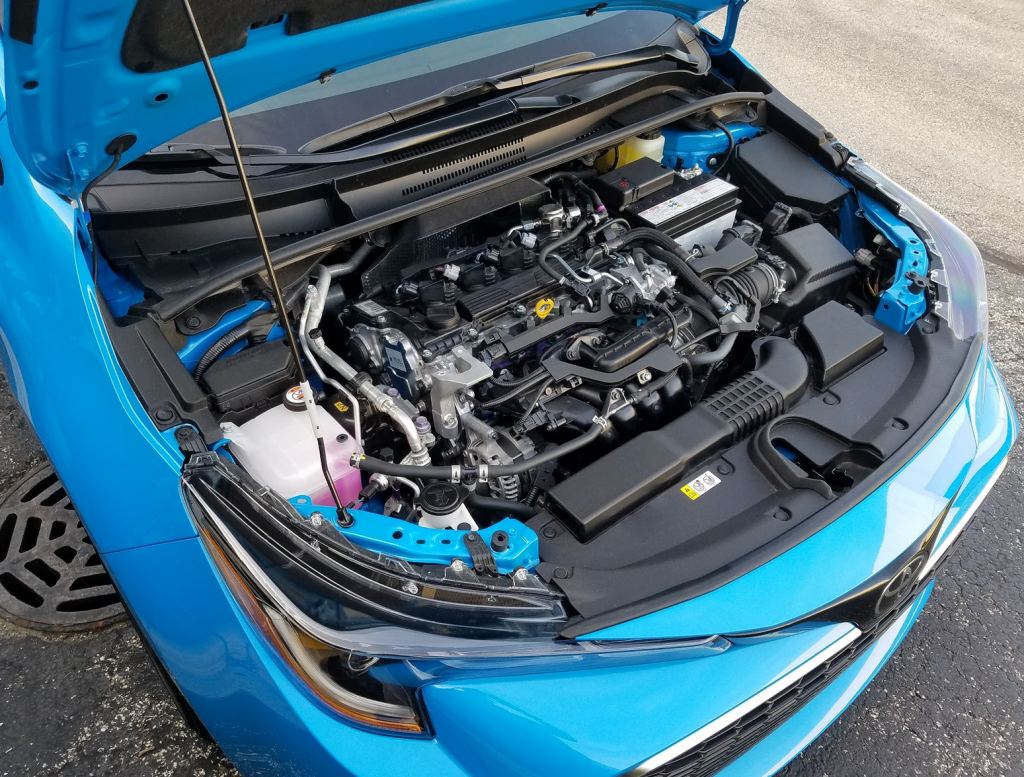 Front-seat head- and legroom are good for a compact. Rear-seat headroom isn’t as good but it’s hardly crowded, and most second-row passengers ought to find leg space to their liking.

Interior storage is best served by a good-size glove box. The covered console box doesn’t hold much, and an open bin at the front of the console makes it difficult to reach a USB port. However, there are long pockets in the front doors and pouches on the backs of the front seats. Open cup holders are found in the console, in the pull-down center armrest, and in each rear-door armrest.

Cargo loads onto a flat but somewhat high floor that leaves space at the rear corners for fairly deep bins to stash incidentals. With all seats up the load space will acceptably serve the grocery-getting or luggage-toting needs of one or two people. However the 60/40-split rear seats fold absolutely flush with the cargo floor, opening up a large, handy area.

All in all, the hatchback in the Toyota Corolla family has metamorphosed into a nicer yet still eminently affordable vehicle that will let buyers spread their wings a little.

While it’s easy to lament the lack of rear-seat space available in the 2019 Toyota Corolla Hatchback—especially when compared to the Corolla sedan–it’s important to realize that this car’s mission has changed somewhat over the past decade.

One-time compact-car buyers are defecting the class, opting mostly for small crossovers instead. Shoppers with a frequent need for rear-seat people space and cargo space at the same time will find such flexibility in a Honda CR-V or Toyota RAV4.

The Corolla Hatchback is for the consumer who generally isn’t pressed into schlepping people and packages at the same time—and would rather not pay extra money for that capability. I suspect the typical Corolla Hatchback owner will have the second-row seats folded flat most of the time, having greater need for cargo space.

According to the federal government, the average car on the road is carrying 1.8 people. That .8 guy will fit nicely in the front passenger seat. The back seat? That’s gym bags, groceries, art supplies, and your bike.

Now, I would like to say something I have never had call to say in almost twenty years of writing about cars: This Corolla is fun to drive. And I, for one, am willing to give up a little rarely used knee room in exchange for a good time.

The new 2019 Corolla Hatchback is one of the sportiest Corollas Toyota has offered in recent memory–particularly in XSE form. Along with its more-engaging driving personality, the Corolla Hatchback offers a much nicer interior and more up-to-date tech features than its current sedan sibling (though the sedan may be redesigned on this platform soon).