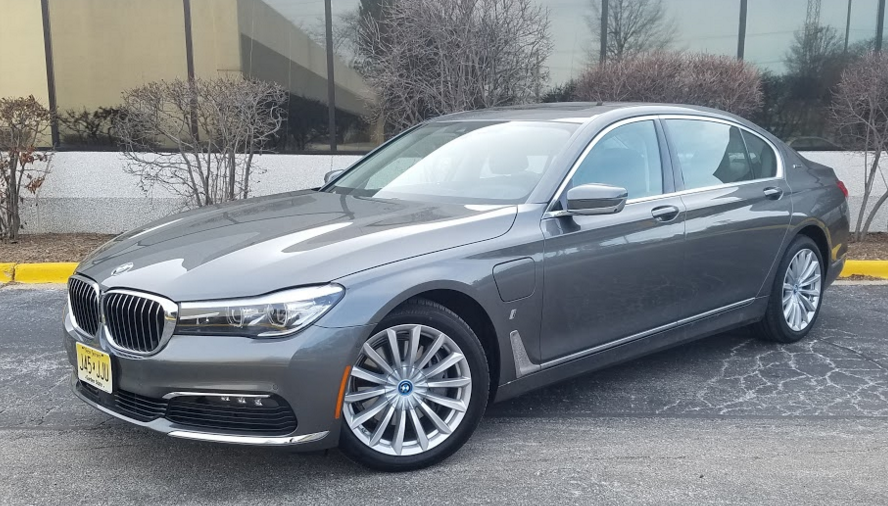 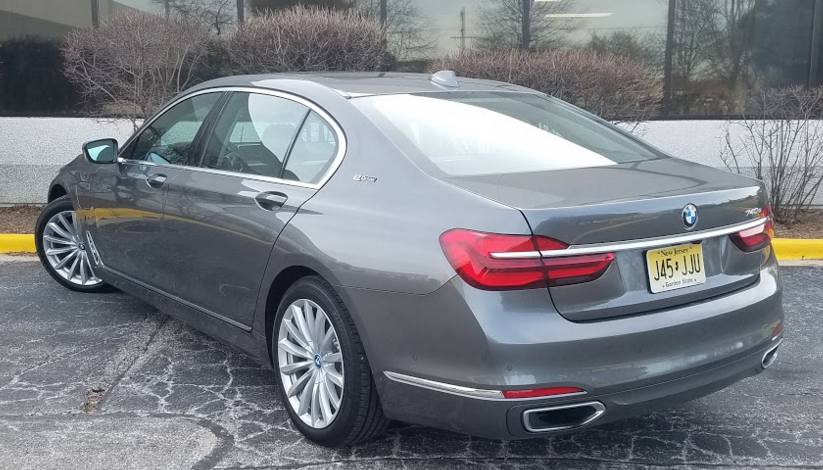 “eDrive” badges on the rear roof pillars are the most noticeable indication that the 740e is a plug-in hybrid, and then only if you know what it means.

Luxury cars are expected to offer some pretty neat features, and BMWs offer their share. But the company’s 740e plug-in-hybrid we recently tested also offered its fair share of surprises.

As we’ve already covered the highlights of a very similar 740e tested last year, this seems the perfect opportunity to “get granular.” So I’ll just pass over the fact that the car is very roomy, very quiet, very luxurious, and impressively economical, and get right to the “surprises.” 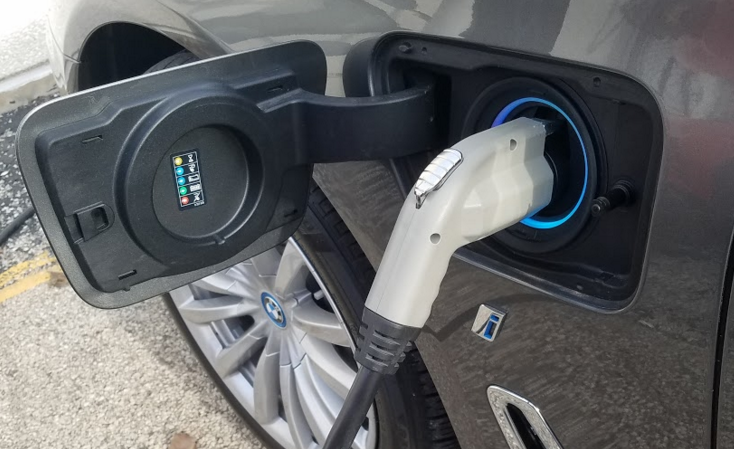 It’s worth pointing out here that cars of this price level offer a staggering amount of equipment. Listing it all becomes a monotonous blur, with some notable features often getting lost in the haze.

Such was the case with the 740e. It was only because I poked around the interior a lot and scoured the window sticker that I discovered some of these gems, while a long drive to one of my secret timing stretches uncovered a couple more.

Don’t knock the 740e for its 4-cylinder engine; it’s adequately quick thanks to electric-motor assist. The combination also helped us average impressive fuel economy for a large luxury sedan.

What might not be expected of the 740e is that under the hood lies not a fire-breathing V8 or even a pressurized V6, but rather a little 2.0-liter turbocharged four. Yep … a 4-cylinder — though it’s mated with an electric motor to create a combined 322 horsepower. That power rating is almost dead even with that of the company’s gas-powered 740i, which carries a 320-horsepower 3.0-liter turbocharged inline six. In all-wheel-drive form (“xDrive” in BMW-speak, which is standard in the 740e), the company quotes the same 5.1-second 0-60 time for both models. Although my own timings averaged out to about 5.75 seconds, that’s close enough – and still plenty quick, despite being on the slower side for the class. Noticeable in full-throttle starts, however, is that there’s a moment’s hesitation in the 740e before anything happens, mostly due to the car’s auto stop/start system, which shuts off the engine at stops. As this occurs even in Sport mode (which deactivates it in many cars so equipped), you pretty much just have to live with it. However, my tests were conducted after the 9.2 kilowatt-hour (kWh) lithium-ion battery was run down (it provides about 15 miles of electric-only range), and when the battery had a higher level of charge, I didn’t notice as much of a delay. Perhaps that allows the motor to move the car a bit while starting the engine, which brings us to the next point.

Interior furnishings match the 740e’s lofty price. Handy console buttons (right) control many neat functions of the 740e. Blue- and red-circled buttons are discussed below. The grey-circled button activates the rear air suspension, while the yellow-circled one is for Auto Hold, which will keep the brake on for you during long stops.

Another neat thing you can do with the 740e is “command” the car to run on gas power even if there’s charge in the battery, and also command the engine to recharge the battery if the charge is low. The former is done with a console button. The latter is done with another console button (blue circle above), which sends you to a screen (below) where you can dial in the amount of charge you want to maintain — between 30 and 100 percent — and the engine will spin the generator (which is also the motor) to recharge the battery while you’re driving. And it doesn’t take long; it went from 0% to my dialed-in 40% in only about 20 miles of highway driving.

With a full charge, the 740e’s 9.2 kilowatt-hour lithium-ion battery can provide about 15 miles of all-electric range. But you can use a console button to access a control panel that allows you to “force” the gas engine to keep the battery at a certain level of charge (40 % has been dialed in here) rather than running it down to get maximum electric range, which allows you to save battery charge for later city driving or other functions.

Besides adding a little quicker jump off the line, there are other reasons you may want to leave the battery with some charge in it. For instance, if you’re taking a long highway drive, you may want to have some electric-only range as a “cushion” in case you run out of gas or have engine trouble, as you should be able to then drive a few miles on electric power. Also, if you’re going to be doing a lot of city driving at the end of a long highway trip, you might want to save some battery power for the stop-and-go stuff. Which brings us to yet another reason.

One of the other neat features of our test 740e was Traffic Jam Assist, part of the $1700 Driver Assistance Plus Package. This is a semi-autonomous mode that the BMW owners manual says will handle braking, accelerating, and most steering functions while in stop-and-go traffic, though you still have to keep your hands on the wheel. This would have been a real benefit during a recent slog through early morning rush-hour traffic to get to the Chicago Auto Show, a trip that took me well over an hour. As I didn’t have the opportunity to test this function, I can’t comment on its effectiveness. But it certainly is a good idea, and it’s easy to activate via a steering-wheel button. A perfect scenario that makes this beneficial is if you live way out in the suburbs but work downtown. You can drive on gas power (with a full battery) till you hit the inevitable rush-hour slog, then activate Traffic Jam Assist and put the car in EV mode, which will make for a more relaxing drive using economical electric power.

Like many plug-in hybrids, the 740e allows you to pre-heat the interior before you get in. Unlike many, however, you can do it even when the car isn’t plugged into a charger if there’s enough charge in the battery.

Another feature the 740e provides is the ability to pre-heat or pre-cool the interior before you get in; thank the big hybrid battery for that. While many plug-in hybrid and fully electric cars offer this function – at least when the car is plugged in — the BMW allows you to do it even if the car isn’t plugged in, as long as there’s enough charge in the battery (the same battery that powers the motor also powers the heater). And even if you don’t pre-heat the interior, the electric heater will warm the interior after you start the engine much more quickly than in a regular gas car.

A large dashboard screen magnifies the effectiveness of the various camera views, especially that of the wide-angle, 180-degree rearview camera (left). Although lots of vehicles now offer 360-degree cameras, the 740e’s views are rather interesting. A simple press of a console button allows you to call up 360-degree/side (center) and 360/front (right) images with an unusual (how’d they do that?) “onlooker” view.

Yet another neat feature: Although lots of vehicles now offer 360-degree cameras, the 740e’s views are rather interesting. A simple press of a console button (red circle in photo up top) allows you to choose 180-degree rear (great when backing out of parking spaces) along with 360-degree and front and side images, and they all display on a really large screen, which makes them a whole lot more useful than some (especially the 180-degree rear).

The trunk suffers in volume due to the size of the hybrid battery, but there’s some added space under the floor, which can be lowered to provide more cargo height.

It’s always a question as to how much fuel economy means to someone buying a car in this class. In many hybrids, the added mpg means you can go farther between fill-ups, which adds an element of convenience. But unless you drive mostly shorter distances and charge the car frequently, that may not be the case here, as the 740e has a much smaller fuel tank than its 740i sibling (12.1 gallons vs. 20.6). So then it comes down to what features it makes available that otherwise aren’t – such as the electric-range cushion and the pre-heating function (which I always thought should be a bigger selling point) – and, of course, the whole “green” aspect.

While a $90,000+ sticker is hardly unusual in this segment, some elements of the 740e’s struck us as kind of odd. For instance, heated rear seats and a heated steering wheel only came as part of a $400 Cold Weather Package, blind-spot alert and lane-departure warning had to be added via the $1700 Driver Assistance Package (which also includes a head-up display), and Apple CarPlay cost $300 extra. However, that’s long been the case – and one of our complaints – with BMWs, though the company is hardly alone in this regard.

Big and luxurious you’d expect from a 7-Series BMW; good fuel economy and some surprising features you might not. Although it will undoubtedly be a slow seller, the 740e has enough going for it to justify its $90,000+ sticker.