The not so good: Passenger and storage space, control layout

After testing the traditional convertible MX-5 Miata last fall — covering its dynamic properties in the report — we recently had a chance to sample the retractable-hardtop version of Mazda’s iconic sports car.

What the Miata’s “RF” suffix brings is a power-retractable hardtop that replaces the “regular” Miata’s folding soft top. The hardtop not only adds security, but also reduces highway wind noise, though only the part of the roof above the side windows actually disappears. In Grand Touring trim, our RF tester cost $2555 more than the Grand Touring convertible we tested earlier.

First of all, in the world of affordable convertibles, this car is unique. (The Miata’s Fiat 124 cousin, which otherwise shares many mechanicals, doesn’t offer a similar model.) What makes it the “RF” is that the hard roof folds back into the trunk, leaving just the rear fastback window in place. This means that it combines the security and quietness of a coupe with the open-air appeal of a convertible. And best of all, the transformation from closed to open (or vice versa) is done with the press-and-hold of a single button — and only takes 14 seconds. We timed it.

Hold down a single button, and the RF’s hardtop drops down behind the seats in just 14 seconds.

We also photographed it. It’s difficult to convey in pictures, but the gyrations this car goes through to drop its top is really quite entertaining to watch. And when the top is down, it doesn’t steal any trunk space, though that space starts out being a bit smaller than in the regular ragtop version. And even the space in that one is none too big. 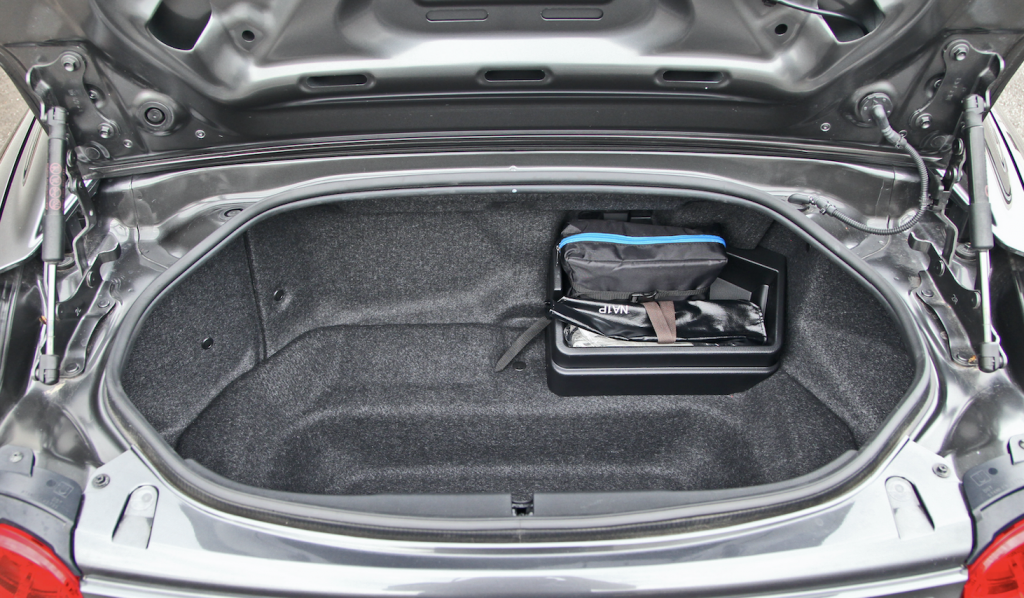 The RF’s folded hardtop doesn’t steal any trunk space, which is good, as it’s only 4.48 cubic feet to begin with — a tad smaller than that of the “regular” Miata.

Limited cargo space also applies inside. The Miata has a cozy cockpit to be sure, and little was sacrificed to storage. In place of a glovebox is a rear console box set against the back wall that is not only small, but also rather awkward to access. So are the cupholders that reside at the driver’s right elbow, though one can be moved into a holder on the right side of the console — where it steals some passenger knee room. Otherwise, there’s just a couple of small console bins; it doesn’t even have map pockets in the doors.

Left to right: The 12-volt socket is hidden in the top left of the passenger’s footwell, where it’s hard to see and even harder to reach. By contrast, just below the temperature knob on the dash is the handy “flipper” that raises and lowers the top. The cupholder affixed to the right side of the console is one of two that otherwise lives behind the driver’s elbow, just behind the open console lid shown at far right; above that is the small, covered rear-wall bin that takes the place of a glovebox — sort of.

Passenger space is also tight. Although taller drivers may fit, anyone over about 6’2 will likely be cramped for space. Although the driver seat still doesn’t adjust for height, at least the steering wheel now both tilts and telescopes, the latter a new addition for 2019. And on the passenger side, a large floor hump cuts into left-side knee and foot room.

Visibility is OK except to the rear corners, where the top sail panels block a lot. Helping when backing, however, is a standard rearview camera. Oddly, the sun visors only pivot down; they don’t swing to the side to cover the side windows.

Even many people who own a Miata may think it has no 12-volt outlet. It does, but you have to know where it’s hidden. And where it’s hidden is up under the dash in the passenger footwell, where it’s not only hard to see, but also hard to access. 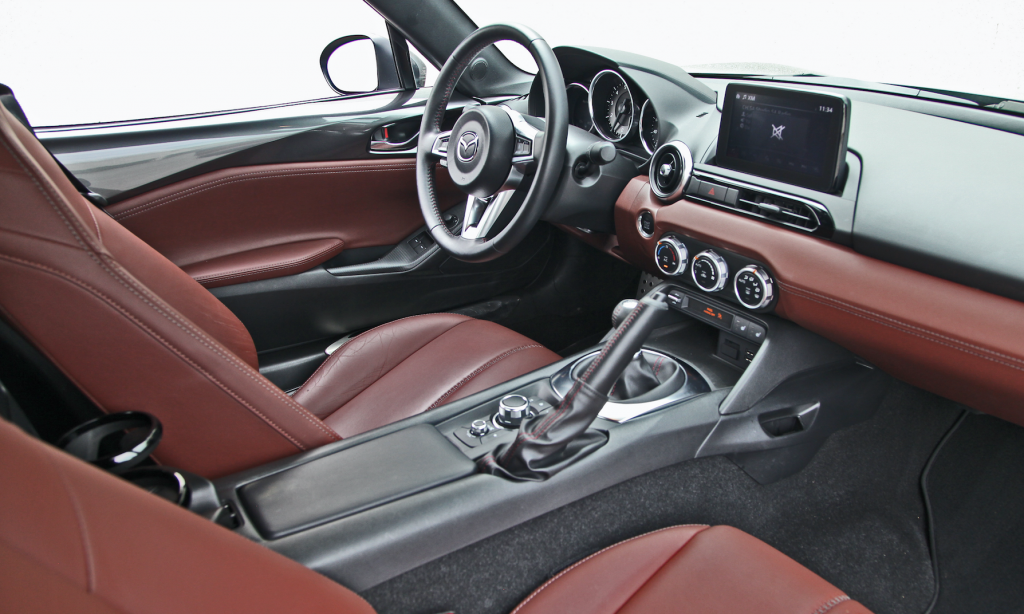 Our tester’s optional Auburn Nappa leather really set off the interior. The Command Control knob (just behind the shifter) is joined by a separate volume knob, but both reside right where you’d naturally rest your right hand — and accidentally hitting the Control knob will often change adjustments when you didn’t intend to. Furthermore, it takes multiple steps to perform simple operations, all accounting for one of the Miata’s few demerits. 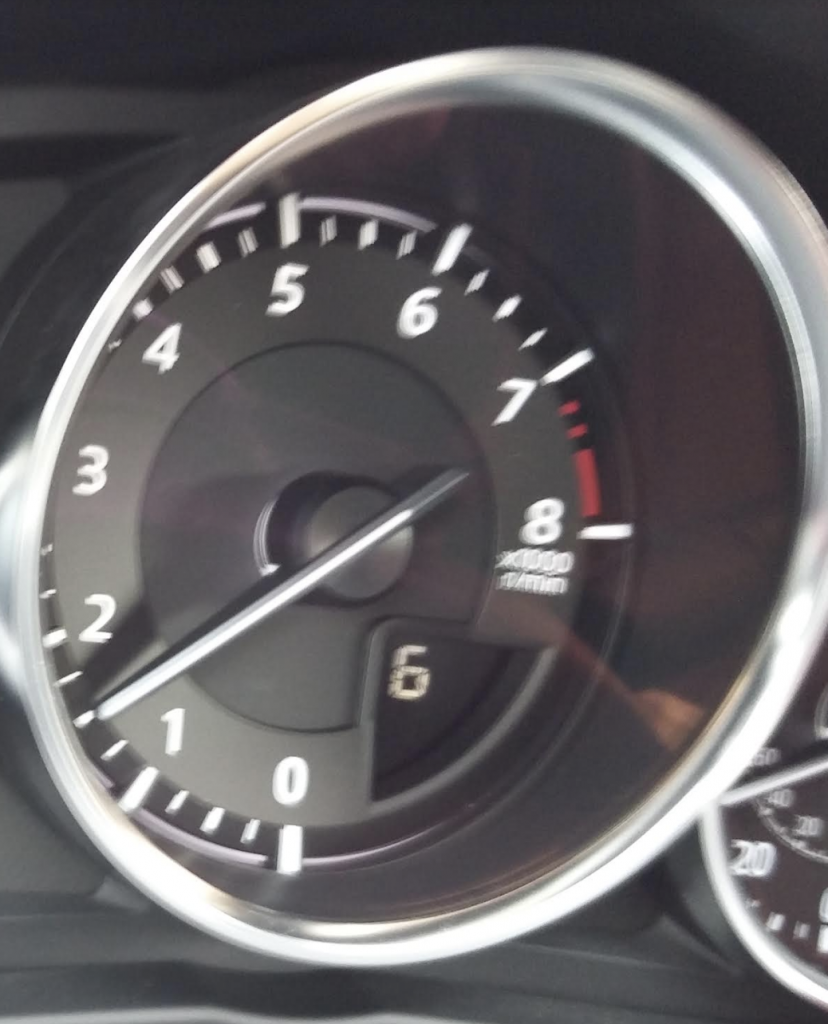 A nice touch: At the lower right of the tachometer is a digital readout of the gear selected.

We’ve never been big fans of Mazda’s Command Control that’s used to make infotainment adjustments. The main controller itself is a knob on the console, with its actions being displayed on a dash screen that’s only touch-sensitive when the car is stationary. Not only is the logic difficult to figure out, it takes numerous steps to accomplish tasks that should be easier, and dropping your right hand can put it in contact with the console control knob, which often results in changes in settings you didn’t intend.

But any negatives pale quickly once you fire up the Miata and head down a winding road. And the Miata has long been a Consumer Guide Best Buy for just that reason. Not only is it one of the few 2-seat sports convertibles left on the market, it’s also (along with its Fiat 124 cousin) the least expensive. And being able to close it up — making it essentially a hardtop coupe — not only helps from a security standpoint, but also leaves it quieter in highway cruising. All of which makes the RF sort of hard icing on a really nice cake.

The Miata is not a car for linebackers — or basketball players. But those who fit (say, about 6’2 or less) will find it to be a thoroughly enjoyable way to travel in closed-car security or open-top fun.