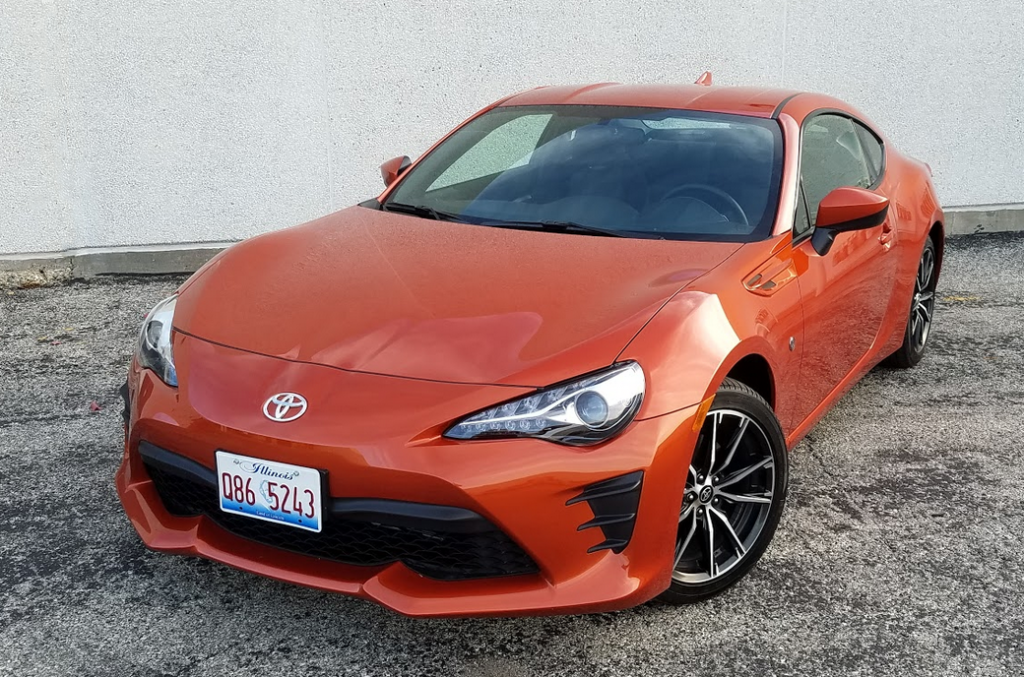 The not so good: Cabin space

With the demise of Toyota’s youth-oriented Scion brand last year, the two-door sporty coupe formerly known as the Scion FR-S becomes the Toyota 86 for 2017. In addition to the name change (the 86 moniker is a tip of the hat to Toyota’s well-regarded “AE86” series of rear-wheel-drive coupes from the 1980s), the updates include revised styling with standard LED headlights, a slight horsepower bump (from 200 to 205) on manual-transmission cars, and suspension tweaks for improved ride and handling.

One of the charms of the Scion FR-S that carries over to the 86 is its relatively low price for the degree of available performance. The way to achieve that has been by going a little stark on the inside. There’s still a lot of textured hard plastic on the dashboard and door panels but the 86 softens them up a bit with swatches of “Grandlux,” a suede-like material. Strips of the stuff also adorn the well-bolstered, manually adjusted cloth seats that keep driver and passenger firmly in place during aggressive cornering. Décor touches like a leather-wrapped tilt-telescoping steering wheel and aluminum-faced pedals are standard, but advanced electronic safety systems like lane-departure or front-collision warnings are absent. A rearview camera just became standard in 2016. 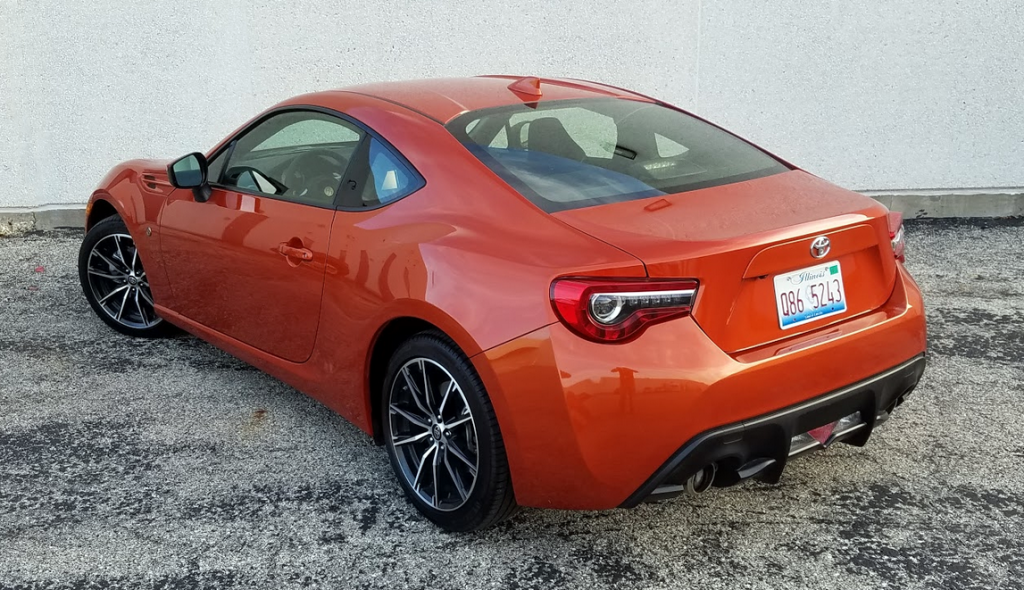 Buying an 86 is a straightforward process. Shoppers select either a manual or automatic transmission, and a color. Options are essentially confined to dealer-installed accessories such as floor mats, performance air filters, and upgraded wheels.

The manual air conditioning is directly governed by three dials in the middle of the center stack. A 7-inch screen displays the easily set AM/FM/HD radio in the 8-speaker audio system that includes Bluetooth audio streaming and phone connectivity, Aha radio app, and voice recognition. Legible gauges face the driver, particularly a black-on-white tachometer positioned in the center in the instrument cluster. 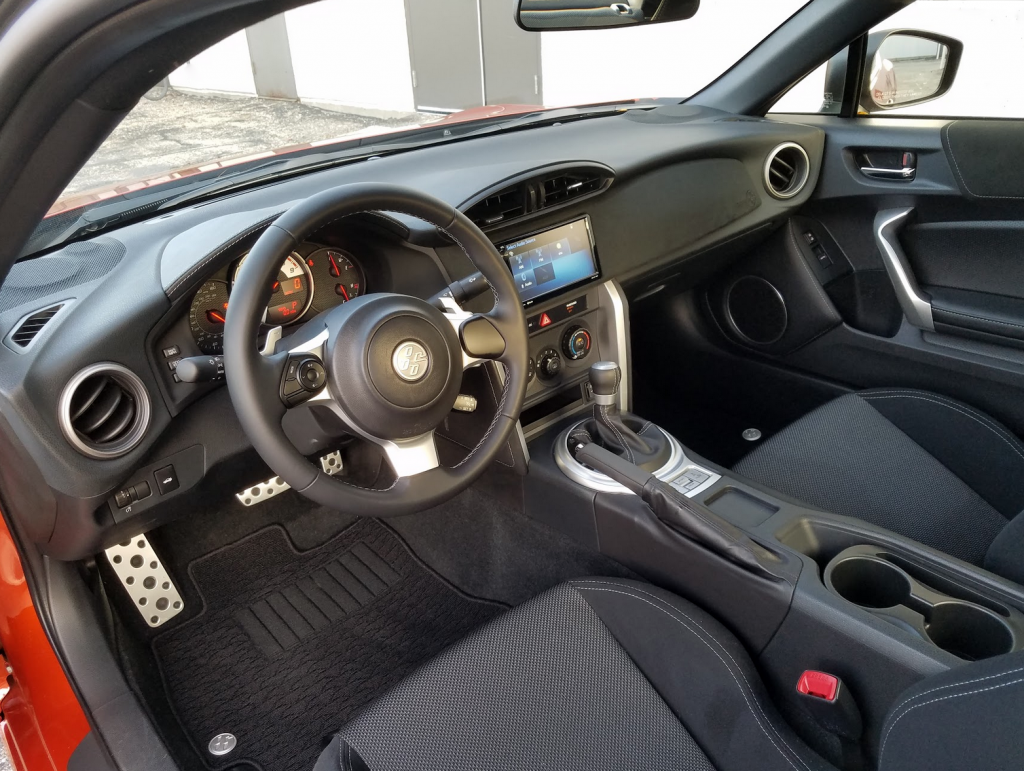 Save for new badging and other minor detail changes, the 86’s cockpit carries over mostly unchanged from the Scion FR-S.

With the 86 built low to the ground, a little bit of a drop is necessary to get into the seats. There’s decent room in front. The back seat is a pair of deep bowls with virtually no legroom, and scant headroom. Vision to the front, sides, and straight back is pretty good; the over-the-shoulder view suffers from the sharp slope of the roof.

The Toyota 86 seems to cater to folks who like to travel light. Door pockets just big enough for bottle holders. There’s a small glove box and no console box—though there is an open bin with a dual cup holder that can be adjusted fore and aft within the space. A slot for a digital device to rest next to auxiliary/USB plug is in the dash below the climate controls. There’s not much trunk room under the rear hatch but the undivided rear seat back folds completely flat and flush with the trunk floor to extend cargo space. The strut-supported trunklid opens up fully vertically to ease loading as much as possible.

With nothing added but the $865 delivery fee, CG’s test car stickered at $27,840. (The manual-shift model starts at $720 less.) That’s manageable for a zesty little GT, and hard to pad, considering that the only factory option is a navigation system. If you’re looking for driving fun on a budget, the Toyota 86 might have your number. 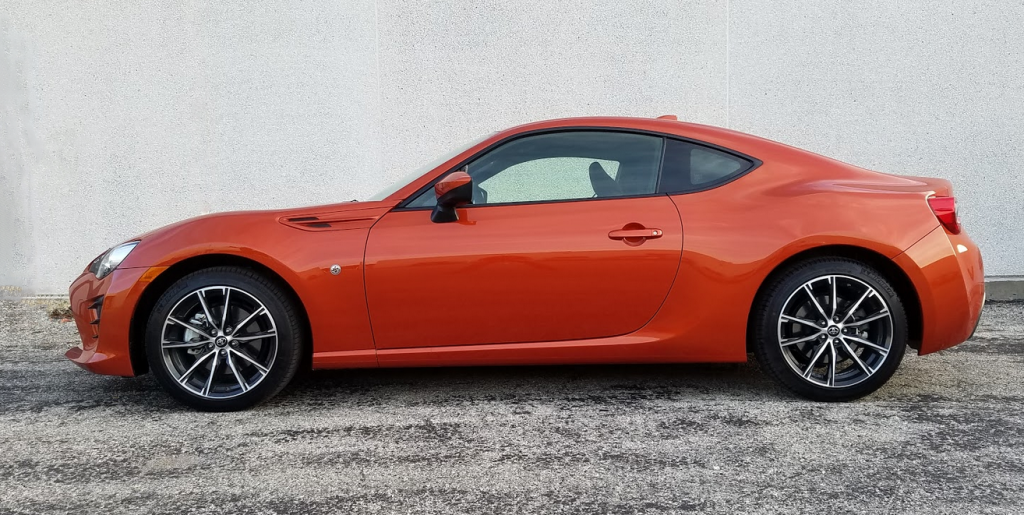 If Consumer Guide awarded a fun-to-drive grade, the 86 would receive an A. Credit the little coupe’s rev-happy engine, slick handling. and go-kart-like steering.