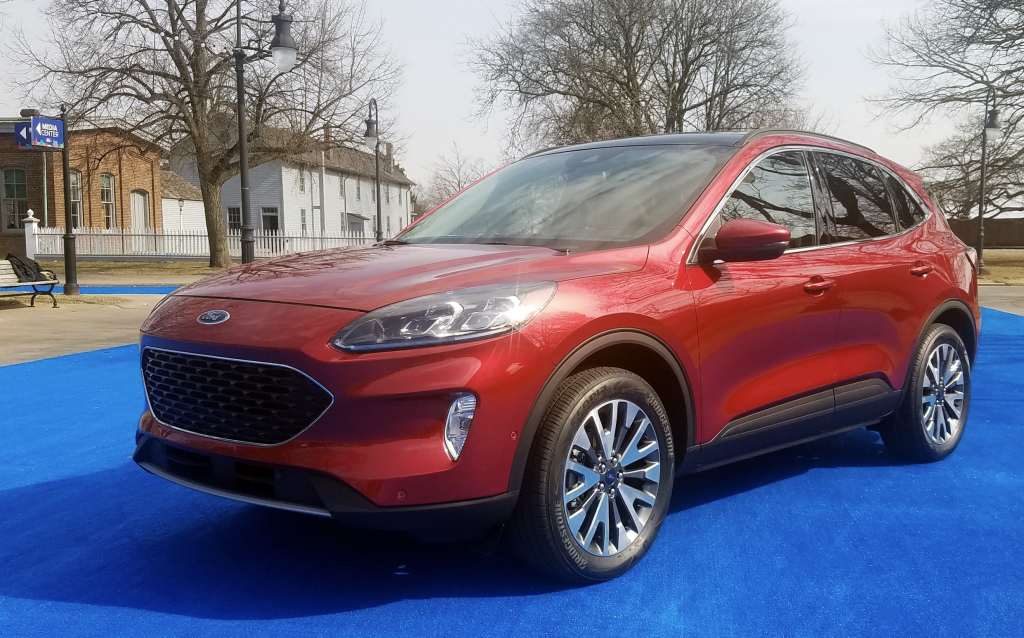 Ford today officially unveiled an all-new, redesigned version of its popular compact SUV. The 2020 Ford Escape gets reimagined styling, a raft of new technology and convenience features, and new powertrains (including both hybrid- and plug-in-hybrid models).

The Escape is a very big deal for Ford. It’s the company’s second best-selling vehicle behind the F-Series pickup trucks, and it’s poised to be even bigger part of Ford’s product-line strategy going forward. The 2020 Escape is the second fully redesigned Ford SUV to debut since the company’s announcement last spring that it would transition away from traditional passenger cars. (The 2020 Explorer, unveiled just before the 2019 Detroit Auto Show in January, was the first.) 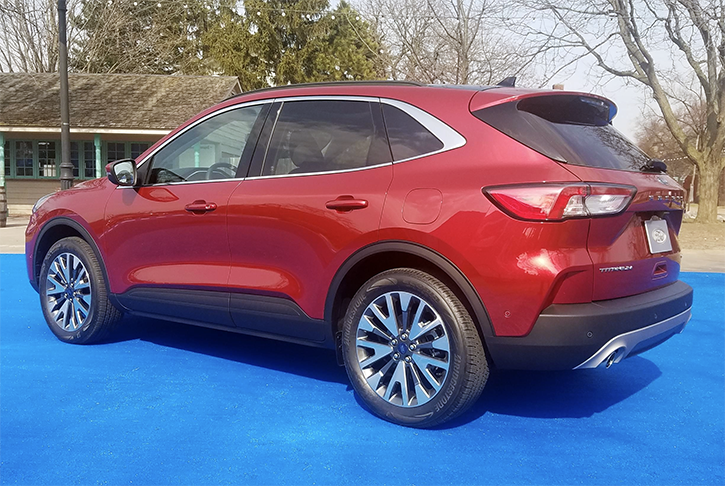 The expanded model lineups of the redesigned Explorer and Escape are both evidence of Ford’s recent shift in product focus. Now that the company has turned away from traditional sedans, it makes sense that its new SUVs would become a bit more “carlike,” and that is certainly the case with the new Escape. And given the fact that the long-awaited, off-road-ready Bronco and a similarly rugged “baby Bronco” compact SUV model are slated to be joining Ford’s roster soon, it’s not too surprising that Ford would re-envision the Escape as a more urban-oriented vehicle.

The new Escape is a sleeker-looking SUV than the one it replaces; it’s also a bit wider and longer than the previous-gen model. To our eyes, the overall look is surprisingly similar to the Ford Focus Active, the “crossover-themed” compact car that Ford had originally planned to offer in the U.S. but dropped after concluding that newly enacted U.S. tariffs would have made the car unprofitable to import from China. Ford says it aimed more for “urban sensual” than “tough and rugged” in designing the new Escape’s exterior, and the sloping shark-nose front end; swept-back headlights; wide, low-set grille; and smoothly sculpted bodysides are in keeping with that concept. 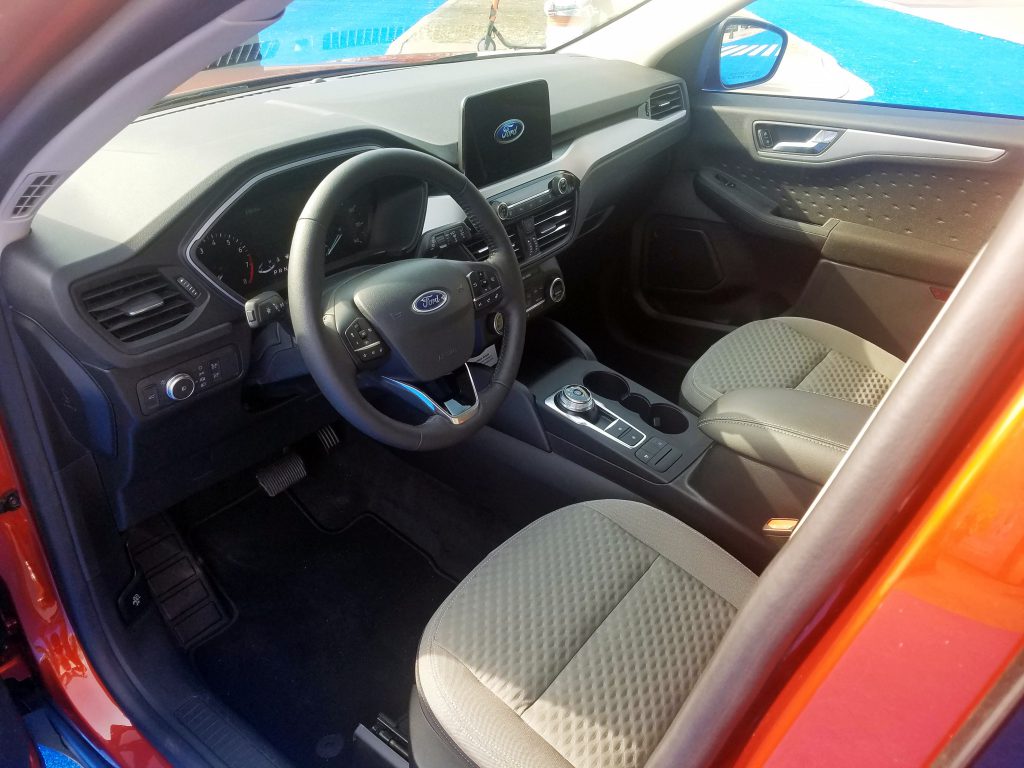 The new Escape is about 200 pounds lighter than the outgoing model, thanks to measures such as an aluminum hood, aluminum suspension control arms, and the extensive use of high-strength lightweight steel. NVH-reduction measures include improved door sealing, acoustic laminated side glass, active noise cancellation (on the regular hybrid model), and belly pans on the chassis that Ford says absorb sound as well as improve aerodynamic performance.

Four powertrains will be offered. (Note that all powertrain figures that follow are Ford’s projected estimates–official numbers, which shouldn’t change much from these, will be available later this year.) Standard on S, SE, and SEL models is a 1.5-liter Ecoboost 3-cylinder that makes 180 horsepower and 177 lb-ft of torque. Available on SEL and Titanium trim levels is a turbocharged 2.0-liter 4-cylinder that puts out 250 hp and 275 lb-ft of torque; it offers up to 3500 pounds towing capacity when properly equipped. Both of these engines are paired with an 8-speed automatic transmission; the 1.5 is available with front-wheel drive or all-wheel drive, while the 2.0 comes standard with AWD. 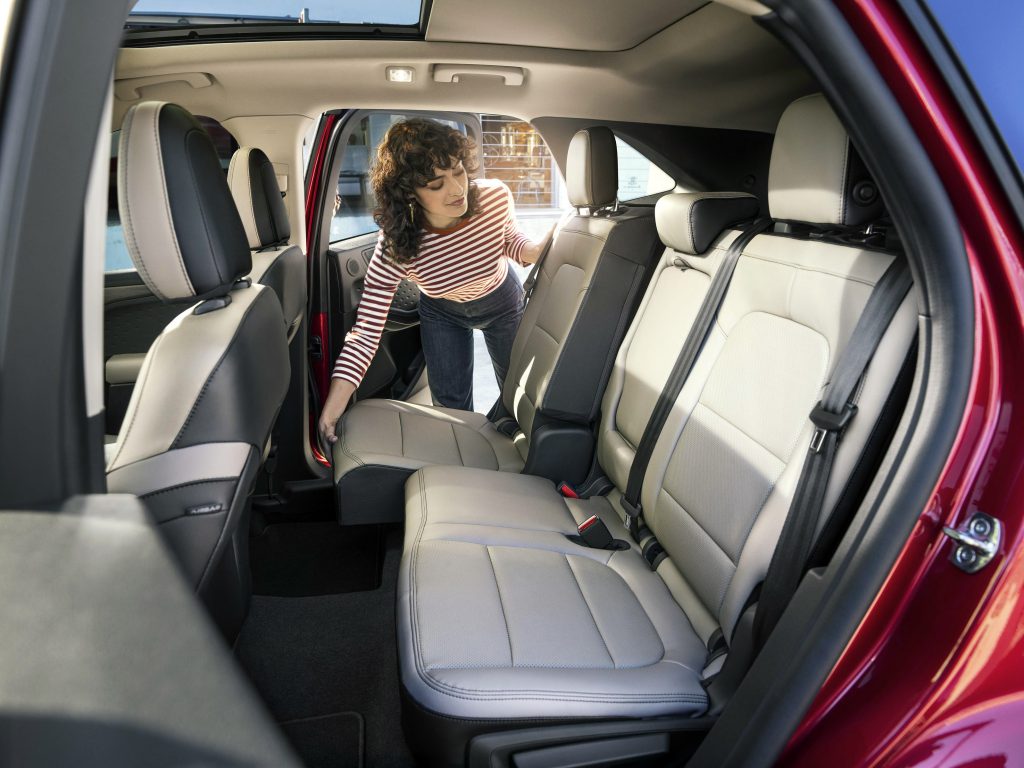 Rear-seat space and flexibility is a strong point of the new Escape. The seats adjust fore and aft six inches to favor passenger legroom (which is excellent for the class) or rear cargo-area space.

The “regular” hybrid comes in SE Sport or Titanium trim; it uses a 2.5-liter four/electric motor powertrain that makes a combined 198 horsepower and enables a projected driving range of 550 miles. The plug-in hybrid comes in SE, SEL, or Titanium trim, and uses a plug-in version of the Escape hybrid’s powerplant; it makes 209 hp combined and is targeted to enable a pure-electric driving range of 30 miles. The PHEV also has four driver-selectable modes to optimize the use of the hybrid system: Auto EV (the vehicle decides whether to run on gas or electric power), EV Now (the vehicle runs on pure electric power), EV Later (the vehicle runs on the gasoline engine, saving the battery’s charge), and EV Charge (the vehicle uses the gasoline engine to charge the battery for later use). The Escape hybrid is available with front-wheel drive or all-wheel drive, while the plug-in hybrid is front-drive only. 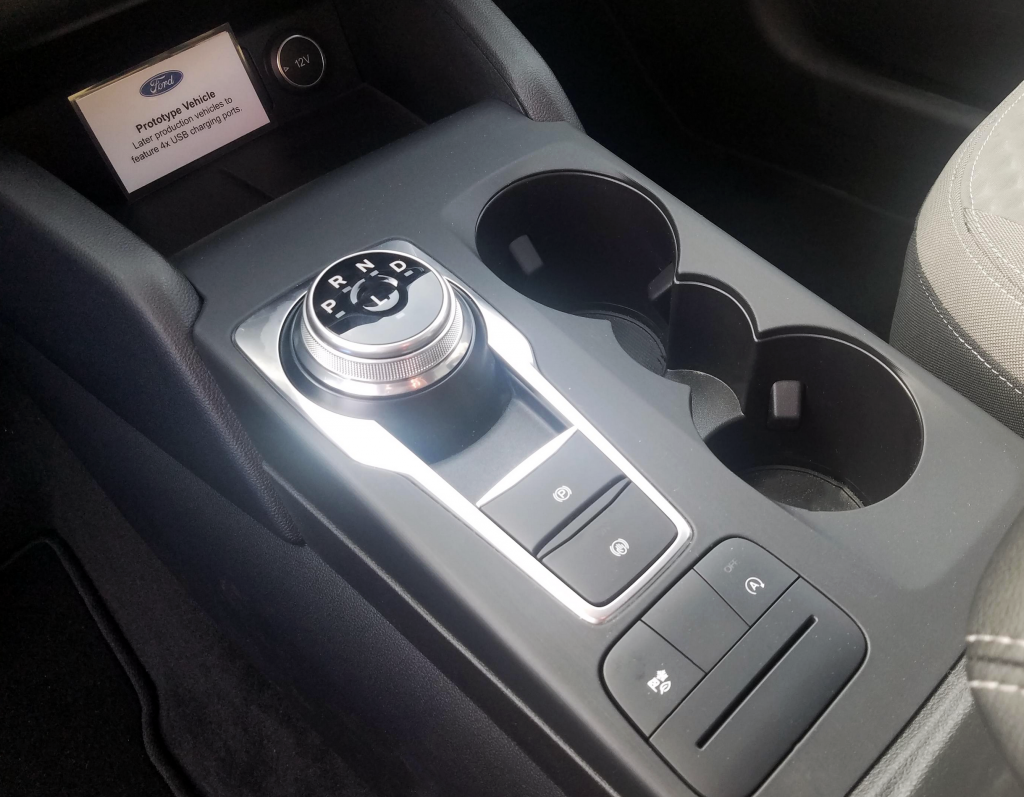 A rotary-dial shifter is standard in all Escapes. The card in the console notes that this is a prototype, and that production versions will feature four USB ports.

Available features include Ford’s Active Park Assist 2.0 automatic parking feature that works for both parallel and perpendicular parking spots; 4G LTE Wi-Fi connectivity (which can accommodate up to 10 devices and has a range of about 50 feet outside the vehicle); and a 6-inch head-up display that can show information such as vehicle speed, incoming calls, navigation info, and driver-assist features. Also available is an adaptive cruise control system with stop-and-go capability; a lane-centering feature; and Evasive Steering Assist, a feature that will provide additional steering assistance if necessary to avoid an imminent forward impact.

A preview test-drive opportunity won’t happen for at least a few more months, but we got the chance to sit in and examine some pre-production Escape prototypes at a sneak-preview press event that Ford held at its Greenfield Village museum complex in Dearborn last week… and we came away quite impressed.

Passenger space is excellent in both the front and rear seats. One of the Escape’s key new features is a sliding rear seat with six inches of travel; this makes for great rear-seat legroom when the seat is adjusted all the way back, and 37.5 cubic feet of cargo volume behind the second row (on gas-engine models) with the seat adjusted forward. The rear seat backs also recline, which frees up a bit more headroom, and the front seatbacks have a “scooped out” shape to maximize knee space. The available panoramic sunroof cuts into headroom a bit, but the space is still more than adequate for six-footers.

The Escape’s overall cargo volume numbers are around mid-pack for the compact SUV segment, at least in gas-engine form (the hybrid models’ electric powertrain components steal some space). There’s more cargo volume in the Escape than in a Mazda CX-5 or Chevy Equinox, but not as much as in larger competitors such as the Honda CR-V, Subaru Forester, and Toyota RAV4. On gas-engine Escapes, there’s a handy two-position rear cargo floor that can be set in the lowered position for maximum cargo height, or in a slightly raised position to free up a bit of hidden underfloor space and create a level load floor when the second-row seats are folded. 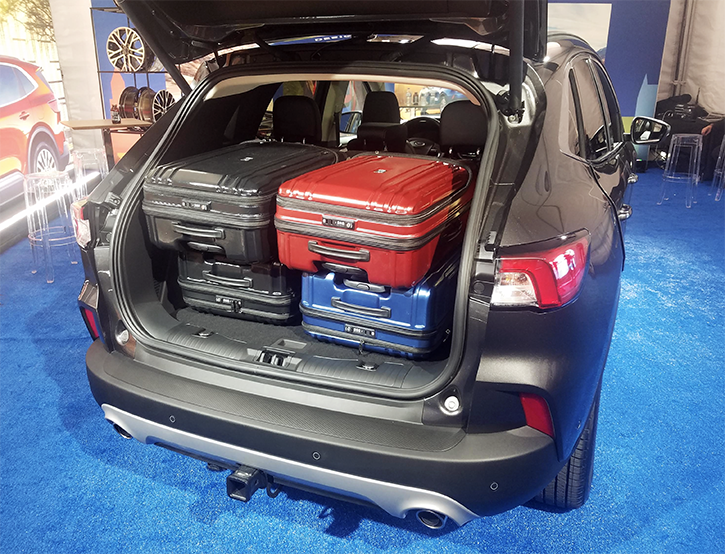 Though the new Escape’s cargo area isn’t the biggest in its class, it still offers enough capacity to accommodate four suitcases or four golf bags–and the four adults that go along with that cargo can ride in comfort.

The 2020 Ford Escape will be built at Ford’s Louisville Assembly Plant in Louisville, Kentucky, and is slated to go on sale this fall, with the plug-in hybrid models following in spring 2020.

We obviously won’t get the full picture until we get behind the wheel of a production model and take it out on the road, but based on our experience so far, the new Escape looks like a clear winner. It packs a lot of thoughtful technology features and excellent passenger and cargo room within its tidy exterior dimensions, and the new hybrid models are welcome additions. Shoppers who might be disappointed by the Escape’s transformation into a more urban vehicle should sit tight—a new off-road-ready Ford compact SUV should be debuting in the not-too-distant future.