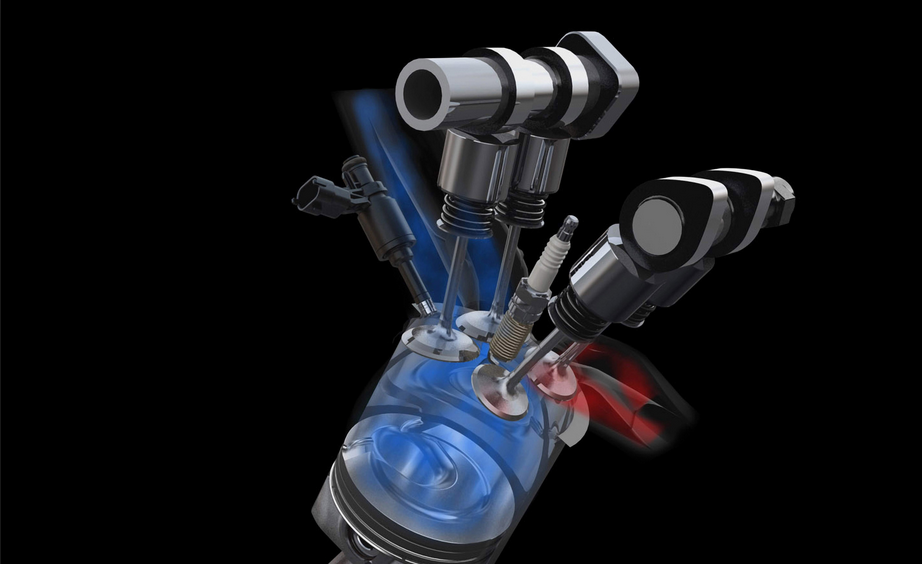 As you might expect, direct injection involves the introduction of fuel directly into the combustion chamber.

To understand how direct injection works, it’s worth knowing a little bit about the history of fuel injection in popularly priced vehicles. Though mechanical injection has been employed since the Twenties, modern electronic fuel injection first saw widespread use in the Seventies, then mostly in German-brand vehicles.

By the mid-Eighties, fuel-injection had become commonplace, and played a key role in improving the performance of vehicles at a time when car builders were struggling to comply with more-stringent federal emissions regulations.

Here is a quick look at the types of fuel injection leading up to—and including—direct injection:

The simplest form of fuel injection, TBI employs single or dual injectors in place of a carburetor. Compared to a carburetor, which is usually a purely mechanical device, TBI is computer controlled and can thus be adjusted to suit specific operatiing conditions.

Cons: As with carburetors, fuel delivery to all cylinders could be uneven from a single, centrally located injector, compromising overall performance.

An advancement of the TBI system, PFI incorporates individual injectors located near each cylinder’s intake valve. This arrangement provides greater control of the fuel-delivery system and eliminates the uneven fuel-distribution issues associated with TBI setups. Advanced PFI systems are designed to time fuel delivery with the opening of the intake valve, allowing for an improved and more-even distribution of fuel in the cylinder.

General Motors briefly manufactured a Central-Port Injection (CPI) system for some of its V6 engines. The CPI setup incorporated a single centrally located injector with fuel ports that directed fuel to the individual cylinders. This system provided many of the benefits of PFI at a reduced cost.

As the name suggests, DI involves injecting fuel directly into the cylinder. While this system does provide greater control of the combustion cycle, that is not the greatest benefit of DI.

Because it is sprayed directly into the cylinder, and not warmed first in the manifold on the other side of the intake valve, gasoline entering the cylinder actually cools the combustion chamber. This cooling effect reduces the chances of fuel “pre-ignition,” which has two significant benefits.

First, DI improves engine efficiency by allowing the use of higher compression ratios. Simply, the mixture of air and fuel can be squeezed more tightly by the piston before it is ignited—this allows for a more complete fuel burn and thus better energy utilization.

Second, the need for more-expensive, higher-octane fuel is reduced. A fuel’s octane level determines its resistance to pre-ignition. As DI reduces the occurrence of pre-ignition, it enables an engine that might otherwise need premium fuel to run on mid-grade or regular-grade gas.

Direct injection became more common when Ford began incorporating the system on its EcoBoost engines. With EcoBoost, Ford branded the combined use of direct injection and turbocharging. EcoBoost engines have since been used in place of larger conventional engines with the net effect of reducing fuel economy while providing similar performance. Most of the small turbocharged engines now found in mainstream vehicles feature DI.

Advancements to watch for in the near future include water- and ethanol injection, both of which can be used with direct injection to further reduce the occurrence of pre-ignition.

What Is a Hydraulic Hybrid?