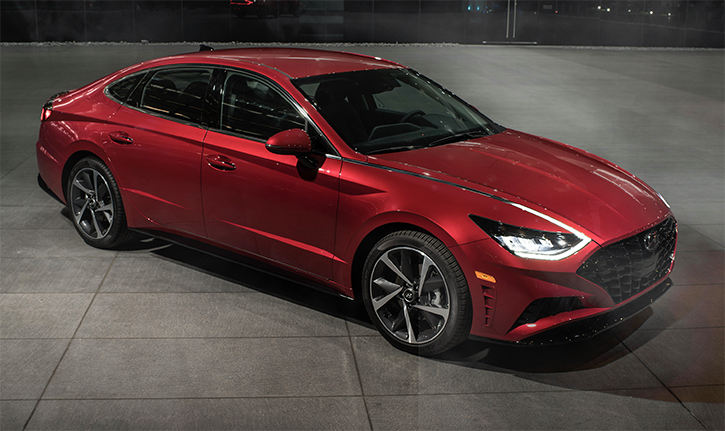 Hyundai officially introduced the eighth generation of its mainstream midsize sedan at the 2019 New York International Auto Show. The 2020 Sonata gets striking new “Sensuous Sportiness” styling and a host of new technology features on an all-new platform.

Though the new Sonata’s overall dimensions don’t look to have changed much, Hyundai says overall height has been lowered an inch compared to the outgoing model. Highlights of the dramatic new bodywork include a rakish “four-door coupe” roofline, a long LED strip that connects the brake lights for a distinctive full-width rear lighting signature, a “Digital Pulse Cascading Grille,” and novel Hidden Lighting Lamps— “vanishing” LED daytime running lamps that appear to be chrome when switched off. Hyundai says the Hidden Lighting Lamps architecture, along with elements of the Sensuous Sportiness styling motif, will define the design identity of future Hyundai cars.

In keeping with the dynamic new styling, Hyundai says the new Sonata is more nimble than its predecessor, thanks in part to enhanced suspension geometry and chassis rigidity. Powertrain choices are bit more pedestrian however, at least at launch. Two engines are offered: a 2.5-liter naturally aspirated 4-cylinder that makes an estimated 191 horsepower and 181 pound-feet of torque, and a turbocharged 1.6-liter four that is rated at 180 hp and 195 lb.-ft. of torque. Both engines are paired with an 8-speed automatic transmission. Expected EPA estimates for combined city/highway driving are 33 mpg for the 2.5 engine and 31 mpg for the 1.6. 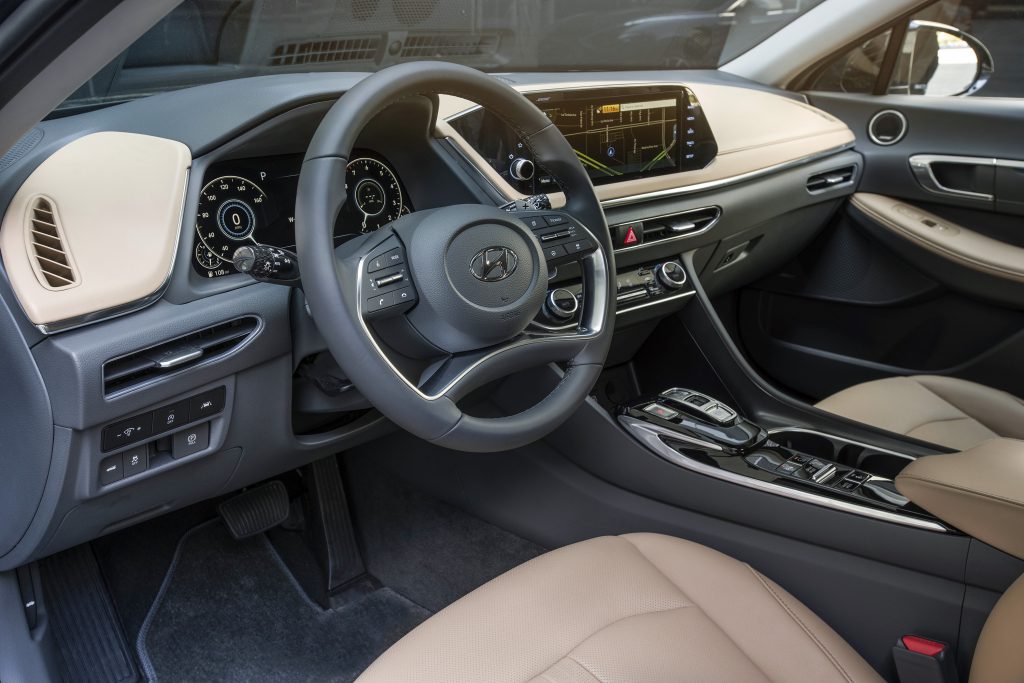 The available Bluetooth system can pair two phones at one time. A Digital Key feature allows the vehicle to be locked/unlocked and started by using a dedicated app on a compatible smartphone, thus negating the need for a key fob (though each Sonata still comes with traditional keys). The virtual “keys” can be shared securely among family and friends, and the level of access to vehicle functions/features can be set by the owner. The Digital Key system is currently compatible only with smartphones using the Android operating system.

The 2020 Hyundai Sonata is slated to go on sale this October, and a performance-focused N Line model (with at least 275 horsepower) and a hybrid version are slated to follow in the near future.

Wow! The styling is the main story here. The 2020 Hyundai Sonata might not be the quantum leap in exterior design over the outgoing model that the redesigned 2011 Sonata was over its predecessor almost a decade ago, but it’s close. As SUVs continue to take center stage as the family haulers of choice, it makes sense that the remaining passenger cars in the marketplace might pivot to sportier attitudes and sleeker designs, and that certainly appears to be the case here. Indeed, much of the new Sonata’s press-release text touted the car’s styling elements. We’re a bit perplexed by Hyundai’s decision to offer two engines that are so close to each other in terms of power and fuel economy, however.