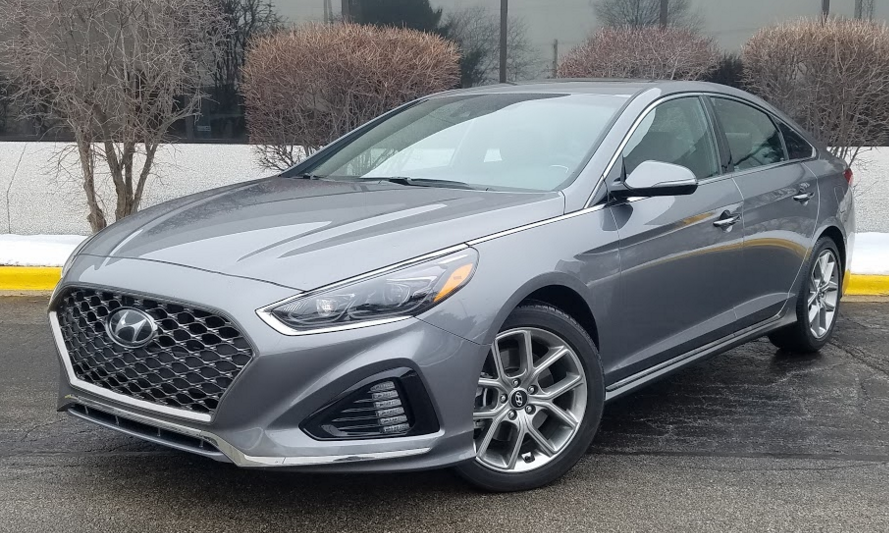 The not so good: High step-up to folded rear seat back, ride composure not up to the best

Midsize-car contenders have a tough row to hoe. What sales haven’t been siphoned off by crossovers go largely to the Honda Accord and Toyota Camry, with little left over for any of the others. And some of those “others” are pretty darn good cars. 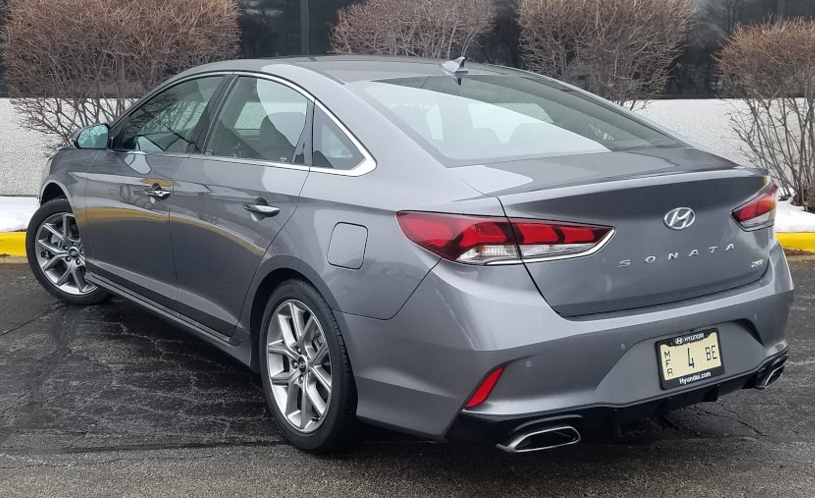 Sonata’s Limited trim level comes with a sport suspension and 18-inch wheels that may help provide a sportier driving feel, but also likely make the ride a bit more brittle over small bumps. Opt for the 2.0T (turbocharged) version — like our tester — and you get bright dual exhaust outlets.

One is the Hyundai Sonata. We’ve covered the recently refreshed 2018 Sonata in a wide-scope First Spin report and with a bit more focus in a review of a top-line Limited with the base 2.4-liter engine, but now we’ve also had the opportunity to drive a Limited equipped with the more powerful 2.0-liter turbocharged 2.0-liter four.

In our previous review of the Limited, editor John Biel made mention that he didn’t feel the 2.4-liter engine made it any more than “a merely adequate accelerator from a standing stop,” but I rather disagree; floor the throttle, and the car responded with a snappier launch than many competitors – particularly those with small-displacement turbocharged engines under their hoods – and continued to pull in nicely linear (if not especially strong) fashion. That engine also worked well with the Sonata’s quick-to-downshift conventional 6-speed automatic transmission to provide fine passing response. Furthermore, the combination averaged 28.7 mpg in about 35 percent city driving, a decent showing for a midsize car. 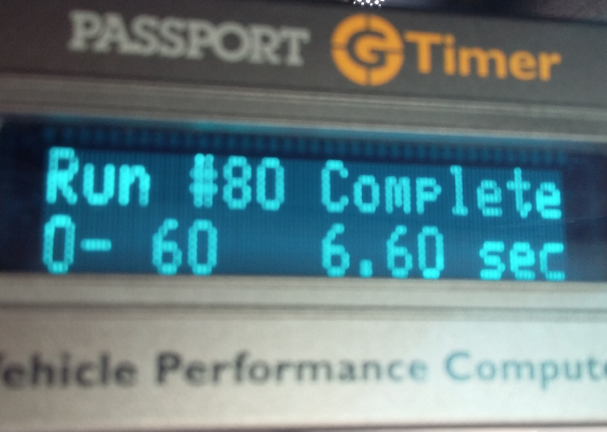 It wasn’t long ago that 6.6 seconds to 60 mph was sport-sedan territory.

By contrast, this Limited’s 2.0-liter turbo was just a bit softer in its initial launch from a stop but ultimately provided far more power: My 0-60-mph times averaged a snappy 6.6 seconds, impressive for the class. Mated to the same 6-speed automatic, it likewise gave great passing response, but suffered a bit at the pump; overall we averaged 25.4 mpg in about 45 percent city driving, though I managed 32.6 on a long highway trip. (In mostly city driving we averaged only about 20 mpg, so the turbo mostly takes its toll around town.)

Although we long felt that ride quality was generally a stumbling block with Hyundais, the company seems to be getting it together in recent years. That was demonstrated by this Limited, for while there remained a bit of brittleness over smaller bumps, overall it rode well enough. Note, however, that the Limited comes with a sport-tuned suspension and 18-inch low-profile tires – both of which provide a sportier driving feel at the expense of ride quality – so lower-line models may fare better over bumps. 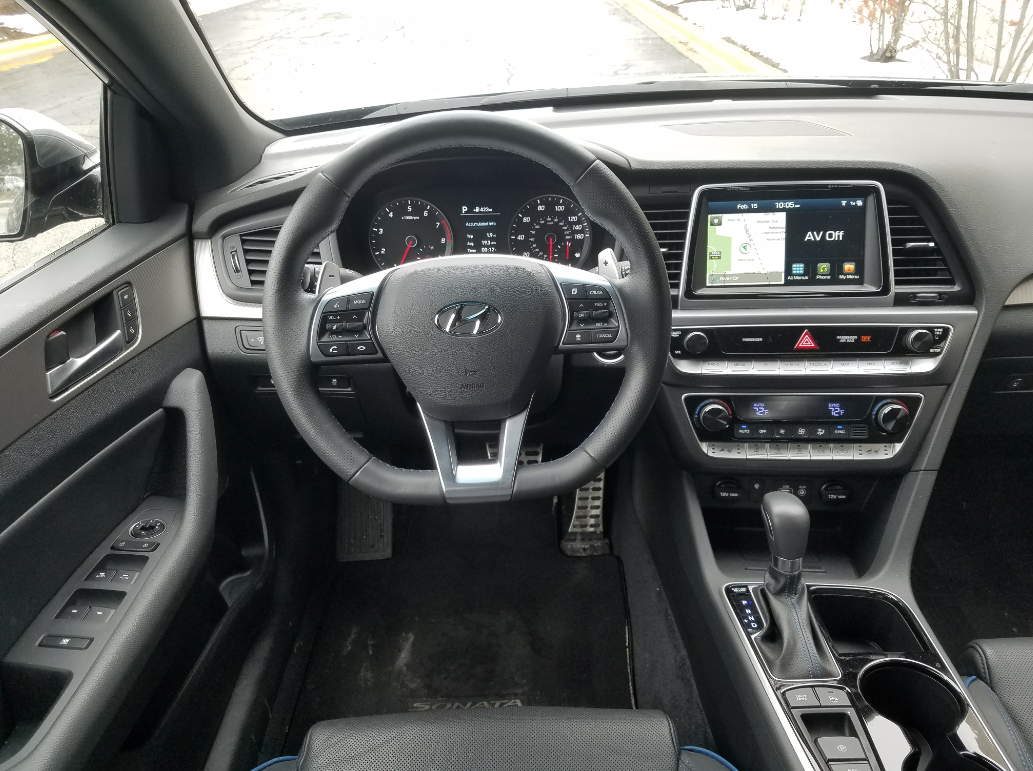 A tidy control layout, nice materials, and a good amount of storage space are highlights of the Limited’s interior.

What traditionally had not been a stumbling block was Hyundai’s control layouts. Thankfully, the company has largely left well enough alone here – with the audio system featuring both volume and tuning knobs along with eight physical buttons – and though the climate system’s fan speed and mode controls are of the rather tedious “repetitive-step pushbutton” design rather than the temperature’s more convenient rotary knob, at least all the controls fall within fairly easy reach. While John mentioned previously that the grey-on-silver climate-control graphics weren’t the easiest to see (and the situation doesn’t improve with its night lighting), the control layout remains a Sonata strong point.

So does visibility. While top contenders also do well in this regard, the Sonata is among the best in terms of having thin roof pillars that block little of your view, though some rivals offer a wide-angle 180-degree rearview camera (versus the Sonata’s roughly 160-degree view) that aids in backing out of parking spaces.

Interior storage space is likewise on par with top rivals – maybe even a bit better. There’s a large glovebox, a large 2-tier console box, two cupholders and a mid-console bin, a large forward-console bin under Aux/USB/ two 12-volt plugs (really handy), and map pockets with cupholders in the doors. The tested Limited also comes with a Qi wireless charging pad.

There’s ample adult headroom and legroom in the Sonata’s rear seat — even with the front seat pushed far back — and we really appreciated the combination of vertical forward and armrest door handles.

Though virtually every midsize car is roomy inside, the Sonata is probably among the roomiest. Of note is that the driver seat can be raised very high (a boon to shorter folks), there’s plenty of rear head and leg room even with the front seat all the way back, and rear-seaters also get their own 12-volt plug. I also really liked the fact that the front doors hosted both vertical forward handles (easier for closing) and handles in the door armrests (easier to control the door when opening).

Most competitors also now feature rather ritzy interior materials – at least on upper-line versions – and the Sonata Limited holds its own here, too. Even the door tops are padded, and the overall look is quite upscale.

If there’s a downside in my book, it’s in cargo versatility. Although the trunk is wide at the back, sickle-shaped hinges dip into the load area, there’s no additional “hidden” storage under the floor, and the folded rear seat backs rest about five inches above the cargo floor, making it hard to slide long items forward. In fairness, most of those failings also apply to Sonata’s closest rivals (Volkswagen’s Passat being among the few to offer a flat floor with the rear seat backs folded), but it’s still something I hold as a general sedan demerit.

While our Best Buys in the midsize class are the Honda Accord and Toyota Camry – something that’s echoed in sales figures – the Sonata remains a competitive entry that shouldn’t be overlooked.