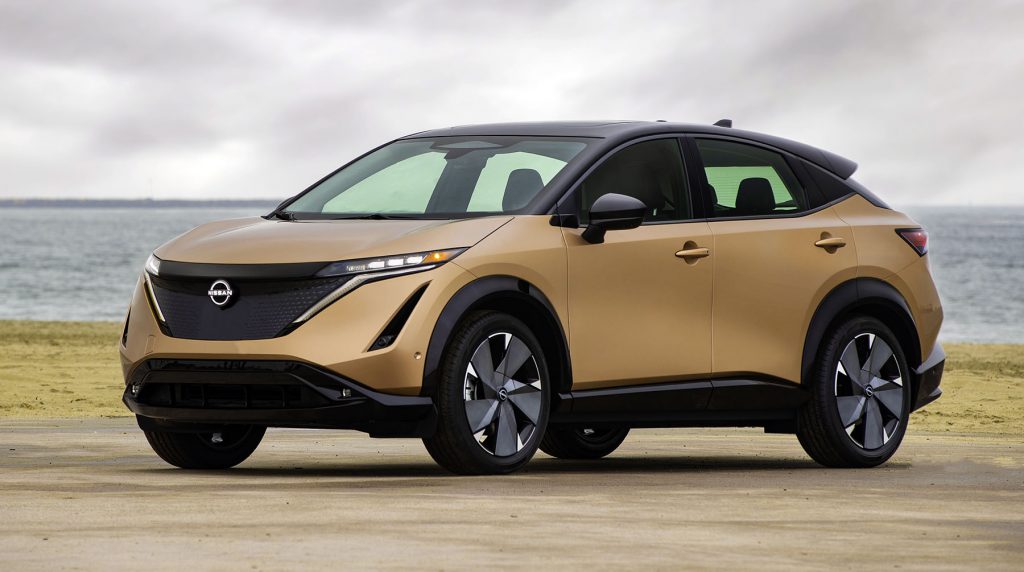 Nissan introduced the U.S.-market production version of its first all-electric SUV this week at the Los Angeles Auto Show. According to Nissan, the new Ariya crossover SUV is the first production model that represents the company’s electrified brand identity.

Granted, that identity so far rides on just two vehicles — the Ariya and the Leaf compact, which has been in production for years. But Nissan is gearing up for a wide roster of EV offerings, and the Ariya is just a first salvo in that effort. As such, the Ariya is built on an all-new EV-specific platform with a liquid-cooled battery mounted at the base of the chassis and provision for a variety of different motors and drive-wheel configurations. 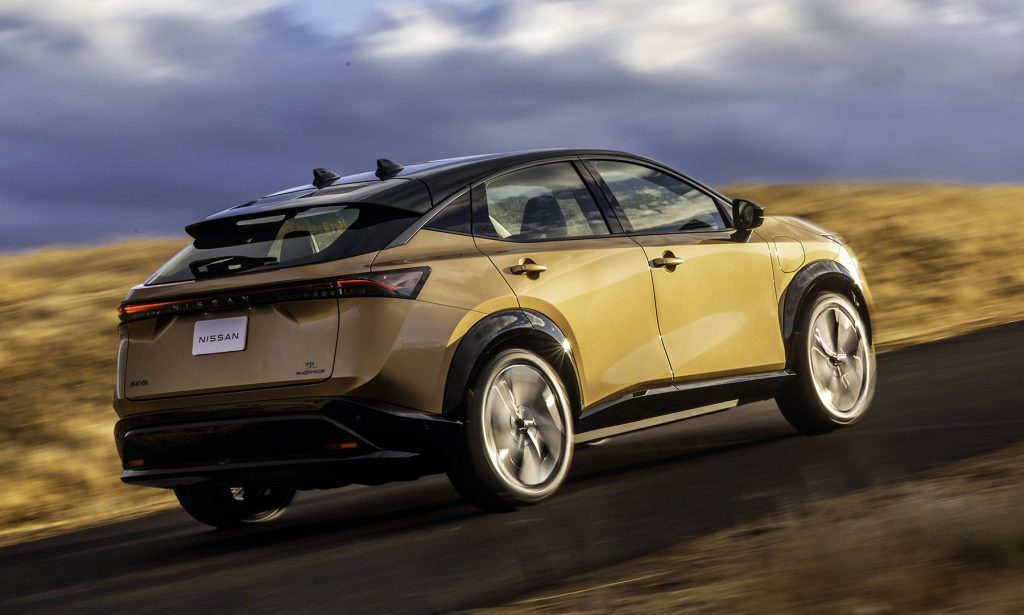 Size-wise, the Ariya straddles several vehicle categories; its exterior dimensions that are similar to Nissan’s Rogue compact SUV, but the interior is sized more like the company’s Murano midsize crossover.

The Ariya is available in a single-motor front-wheel-drive version or a dual-motor “e-4ORCE” (pronounced “E force”) all-wheel-drive model. Single-motor Ariyas have 238 horsepower, while the dual-motor version makes an impressive 389 horsepower. An 87 kWh battery is the only battery choice, but it provides a 265- to 300-mile estimated driving range, depending on the motor and drive-wheel configuration, says Nissan. 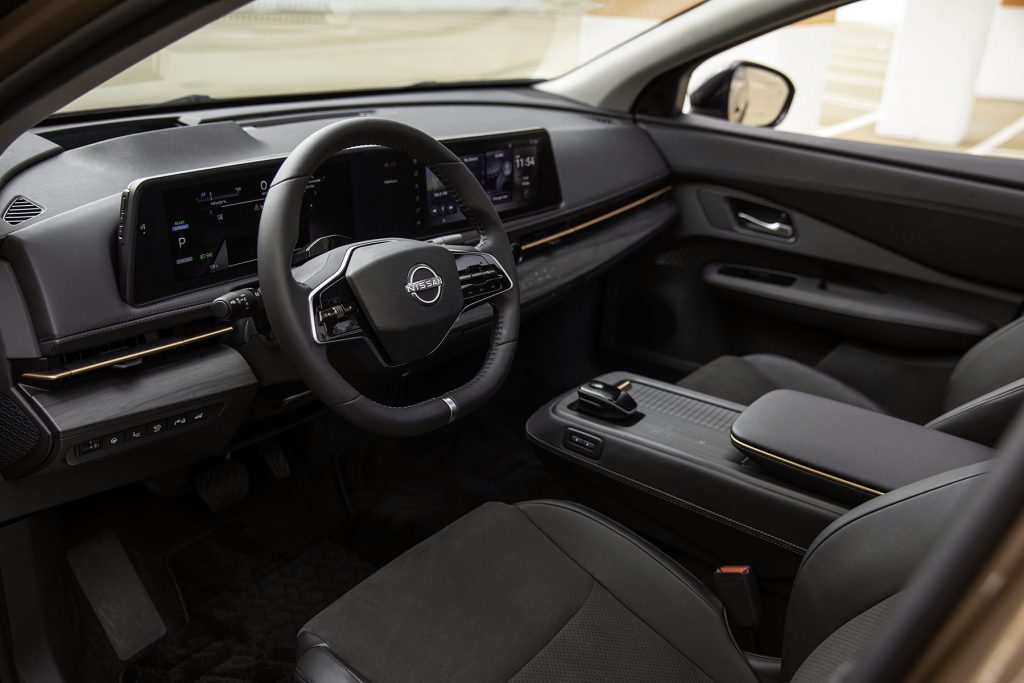 For the Ariya’s cabin, Nissan engineers took advantage of the EV-specific platform to maximize space inside, without the limitations typically imposed by a traditional internal-combustion drivetrain. For example, the climate-control system is located under the hood, where the engine would be on a gas-powered car, thus freeing up interior space.

According to Nissan, the interior is designed around “the Japanese term ma – referring to its spatiotemporal qualities of belonging to both space and time. The interior is more akin to a sleek café lounge on a starship, evoking performance and intrigue, rather than a traditional automotive cabin.”

Hey — their words, not ours. The cabin design does indeed have modern, minimalist aesthetic that’s free of knobs, buttons, or other visual barbs. Whether that’s a good thing or not in day-to-day use will largely depend on how well Nissan has worked out the Ariya’s user interface and touchscreen controls. A fairly standard set of infotainment and connectivity features are expected, including Apple CarPlay and wired Android Auto.

The Ariya is offered in four different models: Venture, Evolve, Premier, and Platinum. Base prices range from $49,950 for the front-wheel-drive Venture to $58,950 for the top-line Platinum with all-wheel drive.

Despite being the first automaker to launch a modern mainstream pure-electric vehicle (the 2011 Nissan Leaf), Nissan hasn’t followed up the Leaf with other electric-vehicle offerings in the ensuing decade. As such, the company has found itself relegated to being a relatively minor player as of late in the EV category (which is heating up rapidly). But with the Ariya, Nissan finally has a strong statement vehicle that has a good chance of attracting mainstream non-EV customers to the segment. This bodes well for the all-EV future the company has planned.

Helping toward that goal is Ariya’s tasteful, crisp styling that looks fresh, contemporary and ready for the future, while still embracing enough of Nissan’s traditional design vocabulary to fit in well with the rest of the company’s lineup. Along with this are the Ariya’s fairly roomy interior dimensions, despite a relatively trim exterior size, which should make it easy to live with in day-to-day use. Topping off those virtues are Ariya’s good power output and impressive range, making this likely to be a popular choice among mainstream EVs. 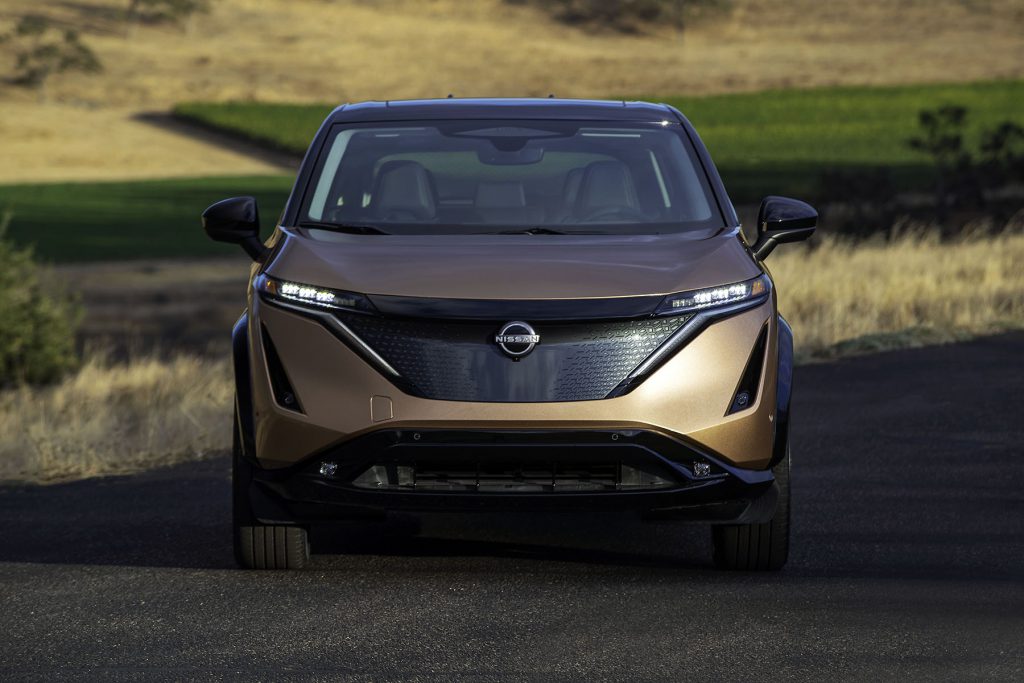 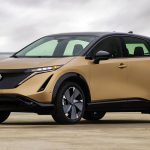 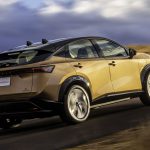 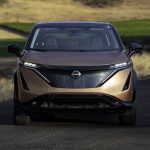 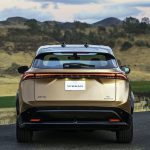 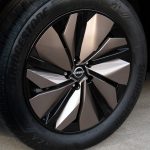 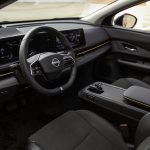