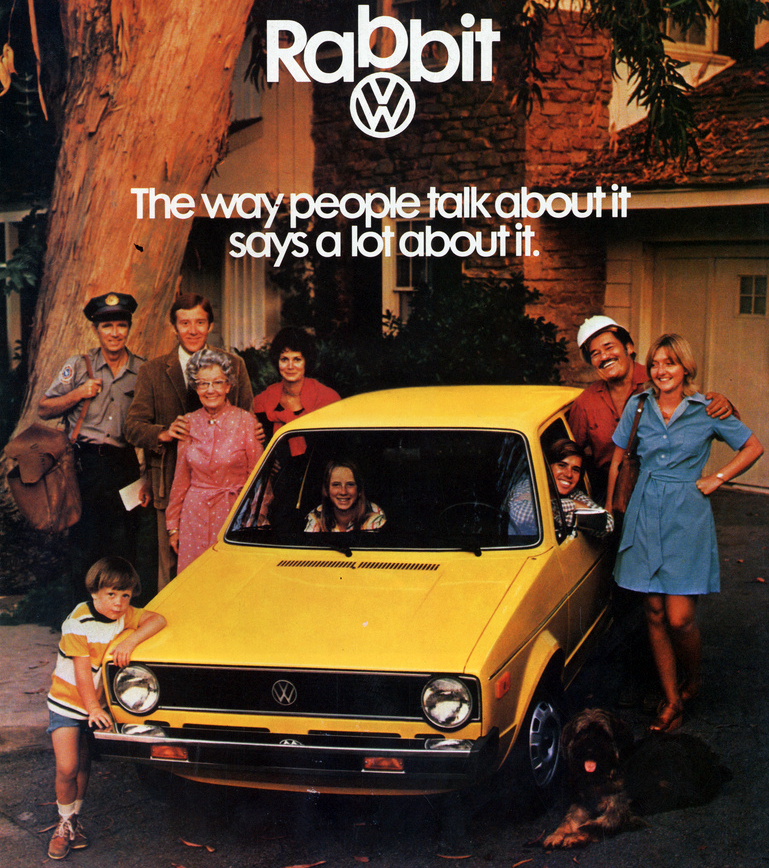 The Volkswagen Rabbit was the 4th most-efficient American-market car of 1976.

Before fuel injection, variable-valve timing, computer-enhanced aerodynamics, and continuously variable transmissions, there was only one path to fuel efficiency: small engines in small cars.

In 1976 terms, small meant curb weights under 2000 pounds and engines well under 2.0 liters in displacement.

Collected here are the five most fuel-efficient cars of ’76, as determined by the EPA. Note that since 1976, the EPA has twice adjusted its fuel-economy testing procedure, the result being historic numbers that are inflated relative to current estimates by approximately 25 percent.

Even if the numbers presented below are exaggerated somewhat relative to new vehicles, it’s hard not to be impressed that cars this frugal existed at all in 1976. Consider that while the Chevrolet Impala that year could be had with a 454-cubic-inch V8, the Chevy Chevette Scooter’s 4-cylinder engine displaced just 85 cubic-inches. A spread of that magnitude is unique to the era.

If you’ve spent time with any of these gas misers, tell us about it. Be sure to let us know what kind of mileage you were getting.

5 Most Fuel-Efficient Cars of All Time 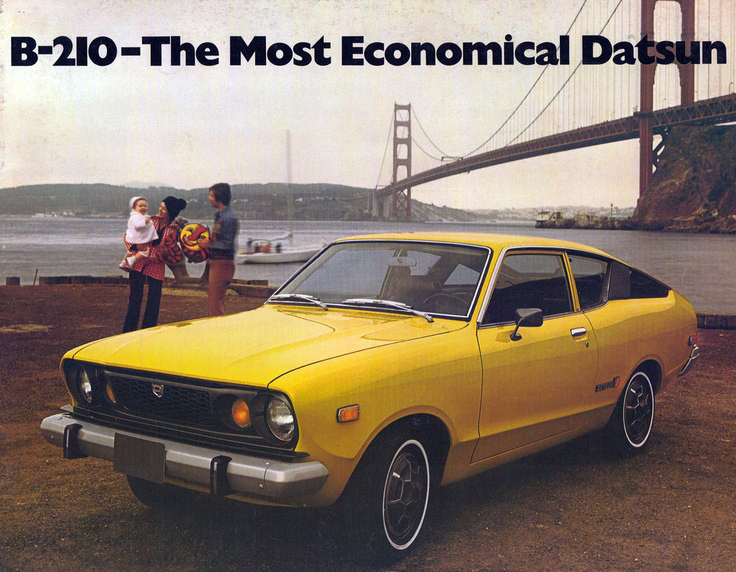 Bumpers designed to meet U.S.-market regulations add about 2 inches to the B-210’s overall length. Base coupes listed for $2849.

To cut weight and keep the base price low, the ’76 Scooter came without a rear seat. The Scooter was also delivered sans glove-box lid, carpeting, and sound insulation. The payoff for all this parsimony was a curb weight almost 200 pounds lower than the standard Chevette.

Known as the Leone in Japan and other markets, the 1400 was one of the first modern front-wheel-drive small vehicles sold in the U.S. A 1.2-liter engine was available for thrifty drivers outside of the U.S. 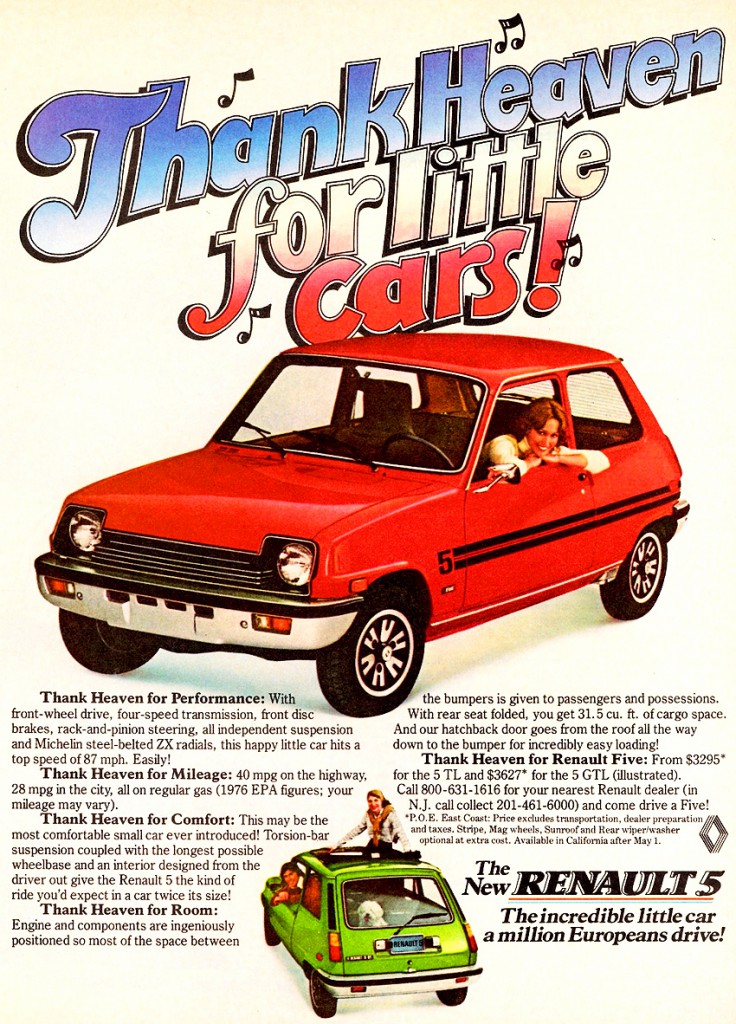 During the 1976 model year, the 5 became known as the Le Car in North America. Renault had found Americans unreceptive to the small French car’s single-digit model name and acted quickly to brand the vehicle more appropriately for the U.S. market. 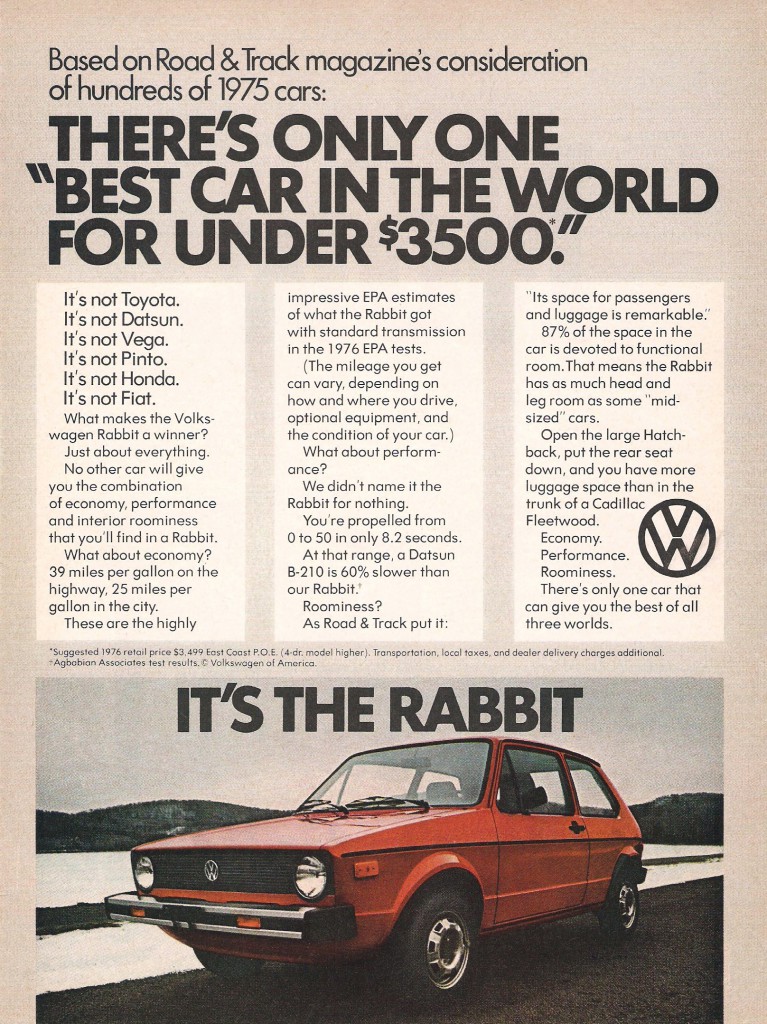 Known as the Golf in markets outside of the U.S., the Rabbit would define for a generation of Americans what a small, efficient car should look like.  In deference to America’s new 55-mph speed limit, VW reports 0-50 mph, not 0-60, performance in this ad copy.