Ugly is in the eye of the beholder. I will not suggest that the cars here are the ugliest vehicles that retailed during the period being discussed, but they are certainly worthy of some serious design scorn. To me, ugly cars usually suffer from an overabundance of design elements—really, the visual equivalent of mixed metaphors. But most importantly, I just think the five cars here are nasty-looking. I realize that I am in the minority on the Celica, but I suspect that I have the people’s support when it comes to dissing the Taurus. Got your own list of ill-favored rides? Let’s hear it.

1996-1999 Ford Taurus
This sorry redesign (pictured above) marked the beginning of the Taurus’s slow decent into rental-darling hell. How Ford let the Taurus go from making car-design history to looking like an asthmatic catfish is beyond me, but buyers stayed away from these midsize sedans and wagons in droves. A deeply discounted (and deeply decontented) Model G variant was added midway through the ’96 model year, but as it turned out, making map pockets optional wasn’t effective tonic for cringe-worthy styling.

2000-2005 Toyota Celica
There are not a lot of design tools that weren’t employed here. All on one car, we have sharp creases, contours so subtle they appear to be straight, and a belt line that begins to form a rear shelf spoiler, yet is capped by . . . well, another spoiler. From some angles, one is forced to wonder if BMW’s infamous “Bangle Butt” was test driven on this unlovable coupe. By most accounts, despite being a little down on power, Celica was a great car. It was also ugly.

2002-2005 Hyundai Sonata
There’s no denying how much this Sonata looks like a Chinese Jaguar knock-off. From the rear, there’s a wee too-much S-Type, and from the front the heavy-handed chrome grille and round headlamps scream faux Anglo luxury. Toss in an over-sculpted hood and you have a silly, squattish mess. There’s absolutely nothing here that hints at the rakish, trend-setting Sonata currently wooing customers at a breakneck sales pace.

2003-2005 Pontiac Sunfire
It’s a shame that Pontiac was killed, as General Motor’s sporty-car division clearly possessed some seriously advanced technology. How do we know this? Because the designers who worked on the front and rear end of the 2003 Sunfire were clearly from different points in the time-space continuum. There’s no other explanation for the twisted combination of a sharply angled cheese-grater-grille-embedded snout with the slightly pudgy Firebird knock-off rear haunches. Lucky Canadians got a sedan version of this awkward last vestige of the J-Car, but us Americans were forced to make do with this dimension-warping coupe. 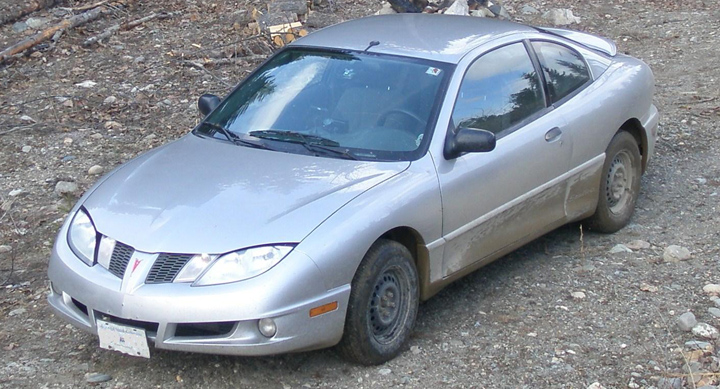 2006-2007 Subaru B9 Tribeca
There is so much ungainliness here that it’s tough to know where to begin. There’s the awful B9 prefix to the otherwise only slightly pretentious name. There’s the oddly squat, dully finned rear-quarter view that, when taken in from the front, subtly reminds some (mostly me) of a ’49 Ford. But the elephant in the room is the hideous puckered-lip-with-mustache grille. As the Tribeca was meant to be reskinned as a Saab (remember the stillborn 9-6X?) one wonders if the sourpuss grille was employed to enhance the distinction between the Subaru and its never-released Swedish cousin. Note that for 2008 the Tribeca lost both the B9 moniker as well as its wonky snout, all while picking up some horsepower in the bargain. The result of that 2008 update was an infinitely more likable crossover. 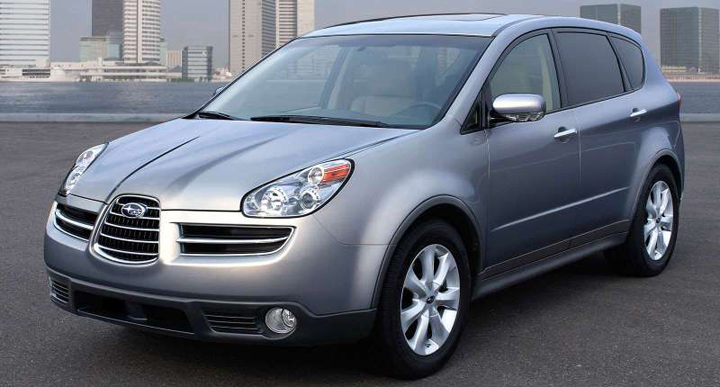