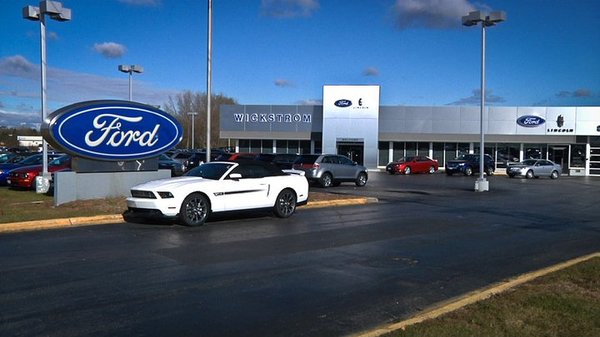 Wickstrom Ford is located in the Chicago suburb of Barrington, IL.

Note: This interview is being republished after having been awarded an International Automotive Media Award gold medal in the interview category. The original interview took place in December of 2011, and the original article was published in January of 2012.

Selling Cars During the Great Recession

CG: No surprise to you, in March of 2008 credit dried up. Then, less than a year later, gas prices went through the roof. Talk a little about what happened to retail customers around that time.  Obviously, sales dropped. But were the customers still coming in? Were they reluctant to buy? How did their attitudes change and how did you guys cope with that?

Wickstrom: One thing that makes us a little unique is the socioeconomics of the North Western suburbs and the far North Western suburbs (of Chicago). I think there was a little more stability because it’s kind of an upper-income area. It was a little more stable, but for sure in fall of ’08 everyone was curious about what kind of loaning was going on. From a dealer perspective and from a regional perspective, I was in charge of the media committee (of the Chicago Automobile Trade Association) at that time, we switched all of our media over to letting people know that there is money that can be loaned by auto dealers and by manufacturers and through banks. So really, we didn’t see a huge pull back. But the perception was that there was. So we needed to get the message out there that people could borrow money. So the reality wasn’t what the perception was.

CG: Yes, it certainly was widely understood that loans were hard to get and that GMAC was in the process of lending money to nobody.

Wickstrom: Right, but at the same time Ford credit was still in business, plenty of banks were loaning on auto loans. Now, on the wholesale side, dealers were definitely in a pinch. There were a lot of dealers being squeezed out of floor planning money–banks and manufacturers not wanting to loan to dealers without a really strong balance sheet, and even dealers with strong balance sheets had challenges.

CG: So, did dealers respond by shedding inventory?

CG: How did customers respond to all the economic turmoil?

CG: Did you find that you had to work with the customers in a different way during that period?

W: Well, when things were at there worst, customers re-thought everything. There was a lot of hysteria going on. People were getting out of their trucks, getting into smaller vehicles and not really analyzing their needs and making a mistake.

W: Overreacting, yes.  Now, the second time around, basically this past summer, we had a huge spike in fuel prices again. Customers were a lot more rational. I think they’re more callous and understood it better this time around. So it made people really think about how to re-use their vehicles and think about how much size they need.

I think, ultimately, long-term, everybody will remain lot more conscious about spending and what kind of fuel economy they are getting and what the trade-off is, how much do they want to spend for hybrid technology or electric technology? You know, where is that gap? Shoppers spend a lot more time thinking about a major purchase now than they once did. There’s less window shopping and more careful research.

W: I think window shopping, spending time at numerous dealers, is dying out. The Internet has evolved so far that people don’t need to go to showrooms to do research.  They can guess what their transactional price will be for an automobile and do research and say hey, “what can I pay for this car?” or “what can I get for my trade?” or what should my rate be, or my lease payment be on a buy or a lease or cash transaction.

Shoppers are, for the most part, more educated when they begin hitting dealer lots, because they’ve been online for months planning this purchase. By the time we see them via phone, Internet, or if they walk-in they’re more prepared and ready.

CG: Do you think the recession in any way accelerated that position?  Perhaps while waiting on the sidelines customers were able to spend time hitting the web even harder?

CG: So obviously the web is a big equalizer. And you’ve got electronic media commoditizing your product, how is it that you then add value to your dealership in that process? If you’re got someone calling in and they’re just shopping prices, how do you sell them on Wickstrom-Ford?

W: That’s the hard part. It’s about the experience and what customers receive beyond just ownership of a vehicle. Whether you’re buying a Ford, or a GM, or a Chrysler, or a Honda, or a Hyundai, or a Toyota…the quality-gap is becoming very slim. Everybody’s product is pretty similar and everybody’s product is really nice. What the differentiator is, is what does the experience feel like and how are they going to take care of me afterwards?

So being competitive means selling the whole ownership experience. You need to give people a nice place to come, nice people to meet, and service that’s competitively priced, as well as efficient and convenient.

CG: As an established dearly you probably see a lot of repeat customers. We talked about customers overreacting to the recession and fuel prices, and about shoppers become more rational. Since the initial period of customer overreaction, are you seeing a trend towards vehicle downsizing?

W: Yes. In part because manufacturers have shifted small-car thinking from cheap and fuel efficient to really nice and fuel-efficient. People are paying a heftier price for these cars. But they’re fuel-efficient and they deliver all the safety, technology, and performance that they’re looking for. We’re seeing a lot of that.

CG: Interesting. I understand that the transaction price on Focus, for example, is up tremendously up over the previous generation.

W: Absolutely. These numbers are rough, but the average Focus transaction price for us is in the low to mid $20,000 range, up from 15 or 16 grand for the previous version of the car. The change reflects changing customer attitudes and the availability of better-equipped, nicer cars.

CG: So, shoppers are downsizing in terms of vehicle size, but not necessarily in terms of price?

CG: Changing gears, you guys sell a lot of F-150 pickups. Do you find that the average truck customer understands and appreciates what EcoBoost is?

W: I think Ford is doing a good job of building that brand. Right now it’s on the F-series as well as Explorer and Flex and it’s going to be pretty much available on all of the vehicle lines. Customers looking at vehicles with EcoBoost seem to know what it is.

CG: Speaking of big pickups–you guys are now selling F-150s and Ram pickups–are you finding that the casual buyer or the personal-use buyer has pretty much disappeared in light of higher gas prices?

W: Actually, it’s the personal-use buyer that needs the pickup space that is still there for us. Also the owners of small, private construction companies that work on their own jobs and want nicer trucks, that business has actually been pretty good for us and has recovered quite a bit the past year.

Really where we don’t see much action at all in is commercial use, regular base-work pickups, vans. But we do see some action on Transit Connect. Companies that are analyzing their fuel efficiency, and questioning whether they need the space of an Econoline or a Sprinter, are frequently finding they can get away with a Transit Connect and enjoy a nice fuel-efficiency gain.

CG: You mentioned that commercial fleets are kind of stagnant right now. Are you running into a situation where the fleet of vehicles that might potentially be traded in is aging and worth less when it comes time to do a trade? If so, is this making it harder to get deals done?

W: We’re not seeing enough action yet to know. I’m sure there are a lot of idle fleets out there, and I think a lot of them are just parked. I’m just hypothesizing there. I know couple of a couple good business friends and customers that have idle inventory sitting there.

So not only is it depreciating, but it’s breaking while they’re not using it. So what’s going to happen when they go to trade or sell on their own? I’m unclear on what that market looks like. There’s very little construction going on, so we wont know how this will work out until the market improves.

CG: You sell both F-150 and Ram pickups, and you sell them on lots very near each other. Do you see a lot of cross shopping between the F-150 and the Ram?

W: Yeah, we get cross shopping there. It’s crazy though, back to the internet discussion, a lot of people weigh the pluses and minuses of whatever they’re looking at, you know, whatever is important to them in whatever brand they’re looking at before they head out. They come up with a short list of options before they head out. That’s one of the advantages we have, with the F-series and the Ram, they’re both great pickups. We can show them both. We get the same with Grand Cherokee vs. Explorer or Durango or Edge. It’s nice having those options for customers when they’ve got multiple vehicles on their shopping list.

CG: So you keep it in house?

W: Keep it in house, that’s the goal; customers for life, right?

CG: The Wickstrom group recently picked up a Lincoln franchise.  Obviously the product line is a little thin right now. What do you see happening with Lincoln?

W: We are very optimistic about Lincoln. We’ve seen what Ford Motor Company, under the leadership of Mulally and his team, have done with the Ford brand.

So, we are just really excited about what’s going on with Lincoln. Look at the current MKX, which is a new product, we’re doing very well with it.  We’ve got a new MKZ coming in soon, and that’s a fabulous-looking vehicle. And then more to come right after that, so we’re really excited about Lincoln and its future. We think that long-term Lincoln can compete with Lexus, BMW, and Mercedes.

CG: So you’ve got Edge and MKX in the same showroom.

CG: Do you find that people are looking at both of them? Or are Lincoln buyers are very different from Ford buyers?

W: You get some of that, but not much. The Lincoln buyer is a luxury buyer. They’re looking at BMW, Lexus, Infiniti, and Mercedes. You might get a loaded Edge buyer to walk up to an MKX, but rarely do you get an MKX buyer to move into an Edge.

Driving in the 21st Century: 10 Things Millennials Will Never Experience