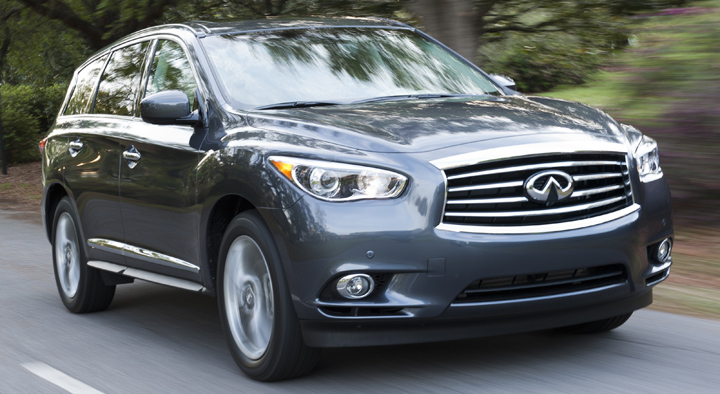 Note: This report supplements Consumer Guide Automotive’s full report on the 2013 Infiniti JX, a premium-midsize SUV that starts at $40,450.

Acceleration: The JX runs 0-60 mph in a little under 8 seconds with all-wheel drive, but this slightly lighter front-drive version felt more like 8.5 seconds. Youmight think that less weight partly offsets a power deficit versus most rivals, but the weight-to-power ratio is still fairly leaden at 16.8 lbs/hp. The weight-to-torque ratio is worse, 17.8 pounds/lb-ft, and maximum twist isn’t online until a fairly high 4400 rpm. So unlike my colleagues, I thought the JX really is a bit underpowered, not only for on-the-level merging and passing but when going up even moderately steep grades—and that’s with just this driver aboard.

Since Infiniti admits it’s aiming the JX mainly at the 300-hp Acura MDX—0-60 in under 7 seconds with AWD—I can’t understand why the engineers didn’t provide more power by whatever means made sense. Unless, of course, the marketers said, “No, you can’t do that because it might cut into sales of our FX35.”

On the plus side, my Chicago-based confreres are right to say that “the continuously variable transmission works exceptionally well, allowing JX to tap into resources it does have. . . .” In fact, the CVT was just as responsive here as in my recently tested Nissan Altima with the same V6. It still revs the engine to a certain point and lets it “hang” there until you back off the throttle, but it’s less syrupy in operation than most CVTs, and its programming most always provides the right ratio. That also helps offset the power deficit, as does the manual-shift feature with 6 preset “gears,” though available steering-wheel paddles would be nice.

Fuel Economy: We averaged 20.5 mpg in Phoenix-area driving, about 60 percent of which was steady-speed freeway work. That aligns nicely with my colleagues’ result and with the EPA’s 21-mpg combined rating (city/freeway estimated are 18/24). Still, I suspect the JX would be even thriftier with more low-rpm torque at its disposal.

Ride Quality: This tester came with all-season 235/55R20-102H Bridgestone Dueler HP Sport A/S tires. The JX photographs better with “dubs” than with the base 18-inch wheels, which may explain why the 20s have been on all the media units made available so far.

My colleagues award a “7” in this category, but I’m inclined to a “6.” Though the ride is far from harsh, there’s more jiggle, thump, and lateral teeter-tottering than I expect from a premium-class vehicle, reflecting both the big boots and what feels like fairly firm spring/shock-absorber calibrations. And, the JX sometimes “clomps” over patches, expansion joints and sharp bumps. Maybe the ride is smoother with a sizeable load aboard.

Steering/handling/braking: The JX feels large because a) it is—this is another “plus-midsize” SUV—and b) its center of gravity is pretty high off the road. As a result, it seems clumsy in even low-effort cornering or just threading through dense traffic. The overlight, feel-free electric-assist steering doesn’t help. But the JX is a great cruiser—which seems to be its main mission in life—though it does wander a bit in gusty crosswinds at highway speeds. Agree that the brakes feel a little weak, especially in hard stops.

Quietness: I can’t agree about “trace amounts” of road noise. Coarse-surface tire thrum is sometimes high enough to almost drown out engine sounds. Not that that’s difficult, as this this Nissan/Infiniti V6 keeps its voice low even in near full-bore acceleration.

Controls: I didn’t encounter any systems glitches, but I did notice that the blind-spot and lane-keeping aids switch on and off from a bank of hard-to-see buttons buried way down on the lower dash rail. Otherwise, I agree that the JX control station is very user-friendly for a feature-rich SUV. Most everything is clearly labeled, conveniently close, and logical in operation. And though some tasks can be performed in more than one way, just as on your computer, the choices aren’t confusing. I didn’t try the Infiniti Connect services, but found the Around-View camera system rather helpful for maneuvering this frigate in parking lots and my admittedly short garage (which it fit in with only a few inches to spare).

Details: I didn’t care for this test car’s busy mix of black lower side trim, grey dashboard and upper side panels, and dark-brown seats, plus off-white headliner. I think light-grey upholstery would lend the whole ensemble a classier and certainly more-unified look.

Room/comfort (front): My colleagues cover the important bases here too, but I’ll add that step-in is a bit of a stretch even for long-legged 6-footers like Yours Truly. Also, considering the many driver assists offered, it’s odd that Infiniti forgot power-adjustable pedals, which some shorter drivers would doubtless appreciate.

Room/comfort (rear): Rear occupants must contend not only with steepish step-in but fairly narrow door bottoms, wide sills, and doors that could swing out a bit more. These issues affect those consigned to the wayback more than 2nd-row riders, but still . . .

Cargo room: As with its ample passenger room, the JX sorta justifies its exterior bulk by offering lots of useful cargo space. There’s even a fair amount behind the 3rd row. Two negatives, though: 2nd-row seat conversion is a mite confusing and clumsy, and folding both seat rows leaves a gap for small objects to fall through.

CP Says . . . Larger SUVs are not my thing, but I can’t deny that the JX, does a great job of plugging an obvious hole in the Infiniti lineup. This is a very nice rig with many assets, and should thus have great appeal for those who want—or think they need—such a vehicle. Even so, the underwhelming performance and indifferent ride (at least on 20-inch wheels) are almost deal-breakers for me. So is the highly conditional options menu, which seems almost mercenary. Though Infiniti isn’t the only luxury brand offering features on a “can’t have this without that” basis, it’s hard not to be cynical when measly $370 roof rails require ordering the $4950 Premium Package. You want a proper roof rack? That’ll be another $290, please.

So let me save you some money. The $1,700 Theater Package seems a questionable expense when so many kids have iPads, and the $2,550 Deluxe Touring Package contains nothing you can’t live without unless you have very temperature-sensitive buns. The $3,100 Deluxe Touring Package is basically a bunch of electronic nannies that heads-up drivers don’t need, and drivers who do can get the most critical helpers in the $2,200 Driver Assistance Package. The key Premium Package wouldn’t be worth my money either, except for its front/rear obstacle detection and, to a lesser extent, navigation system. So live it up, check that one box, and your delivered price will be in the mid-$40,000s instead of my loaded tester’s $54,000. You’ll still have a very nice big crossover, just one without a lot of needless high-tech frippery. Trust me on this. You won’t be sorry—unless you’re hopeless addicted to gadgets. And you’re welcome.