Is it too soon to indulge in some 1980s automotive nostalgia? I hope not, because I’ve been reminiscing quite a bit lately about the days of leg warmers, E.T., and Huey Lewis and the News. Don’t ask me why. Most car enthusiasts lump the early 1980s in with the 1970s as the automotive dark ages, but there were bright spots. I was combing through Consumer Guide’s amazing photo library recently when I stumbled across two snapshots in our 1983 Buick files. They’re mediocre photos, probably taken as an afterthought at a full-line GM press event for its soon-to-be-released 1983 models. But the car in them is anything but mediocre—it’s a one-off custom built by legendary drag-car and hot-rod builder “Lil’” John Buttera.

It would take a thick book to properly chronicle John Buttera’s career, but we’ll try to nutshell it in a few sentences: Buttera started out in the late 1960s building dragsters and funny cars that were among the most innovative and finely crafted machines of their day. In the mid-1970s he shifted his focus to street rods, and he went on to completely change the face of street rodding. He pioneered the use of custom-machined billet-aluminum parts, and he brought a new level of sophistication to street-rod design and fabrication. Sadly, Buttera passed away on March 2, 2008, but he left behind an incredible body of work, and his influence continues to be felt in the hot-rod world.

As Lil’ John project vehicles go, this Regal is a relatively simple build—no major engineering changes, just a few well-thought-out chassis, interior, and body modifications. Buttera was getting into Indy Car racing at the time, and GM (then as now) was big into supplying Indy 500 pace cars. Buick likely commissioned Buttera to build the Regal as a promotional tool.

The paint job is quite similar to the scheme of the 1981 Buick Regal Indy 500 Pace Car, which must have suited Buttera’s tastes just fine; most of his cars wore understated colors. The front and rear bumpers were tucked in and molded into the body, and most trim pieces were either blacked out or painted body color. According to a 1982 Car Craft magazine feature I dug up, Buttera made his own aluminum grille insert, added Recaro bucket seats, and installed upgraded suspension components such as shocks, sway bars, and springs to lower the ride height and improve handling. The Centerline Champ 500 wheels on outline-white-letter Goodyear Eagle GT radials (white-letter tires hadn’t become totally passé yet) were state-of-the-art rolling stock for the day . . . and the jumping-off point for the custom-machined billet-aluminum wheels that Buttera would soon invent. Aside from some detailing, the 3.8 V6 was left stock.

This car is a fascinating time capsule of cutting-edge street-machine fashion circa 1982, and an obscure, virtually forgotten artifact of one of the best hot-rod builders who ever lived. I would love to know where it ended up. Did GM keep it? Did it fall into private hands? Was it (gulp) scrapped? Anybody know? 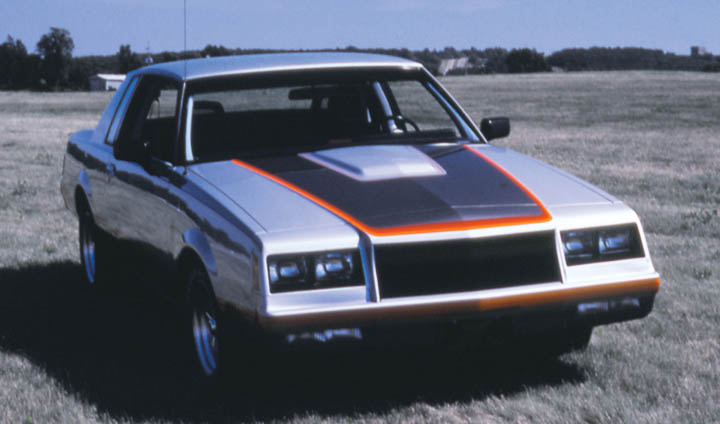 The Buick Regal’s new-for-1981 sloped nose turned out to be a big aerodynamic advantage on NASCAR superspeedways. Buttera’s version looks even sleeker; to me, it looks a bit like a more angular version of the 1983 Chevrolet Monte Carlo SS’s “aero” nose.