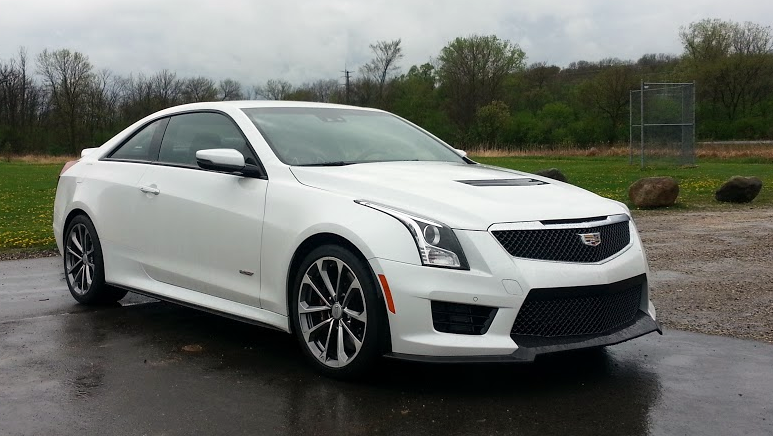 Cadillac unleashes a track-ready high-performance version of the ATS for 2016. The ATS-V comes in coupe or sedan form, with performance suspension, functional styling touches, and a 464-horsepower twin-turbo V6.

When Cadillac rolled out its ATS compact sedan as a 2013 model, it was aiming directly at upsetting the BMW 3-Series’ dominance as the driving enthusiast’s sporty luxury compact of choice. With the new-for-2016 ATS-V, Cadillac has the high-performance, track-ready versions of the 3-Series—the M3 sedan and M4 coupe—squarely in its sights.

General Motors’s luxury division first entered the hot-rod sports-sedan market in 2004, with the introduction of the 400-horsepower, Corvette-engined Cadillac CTS-V, then doubled down with a supercharged, 556-hp second-generation model for 2009. Though the CTS-V has served as a worthy competitor to contemporary BMW M3s (and M5s, and Lexus IS-Fs, and Mercedes-Benz C-Class and E-Class AMG models) it always straddled the line between the premium-compact and premium-midsize classes. In the ATS, Cadillac finally has a car that competes more directly with the 3-Series in size and weight. 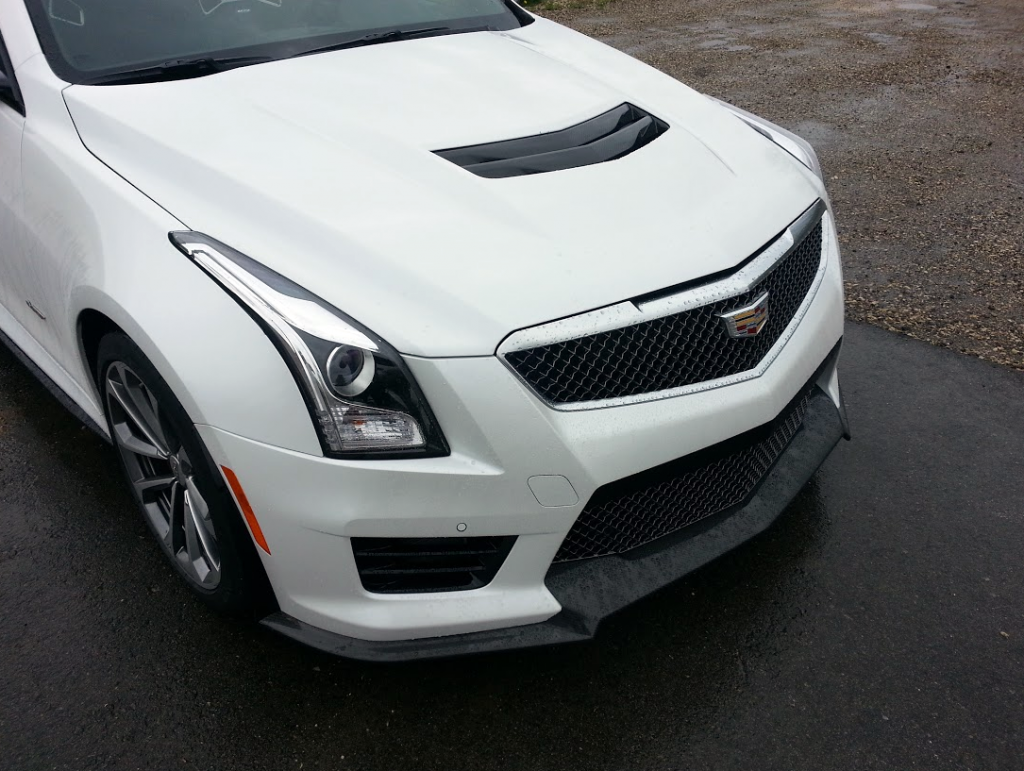 “Chain link” grille mesh is standard on all ATS-Vs. This example is fitted with the optional Carbon Fiber package, which adds an exposed carbon-fiber finish on the hood vent and the more-aggressive-than-standard front splitter.

In concept, Cadillac’s intent with the ATS-V is the same as its European and Japanese rivals, as well as the CTS-V: transform a sporty/performance premium compact into a true track-day warrior while sacrificing little of the sophistication and civility of the original vehicle. Cadillac refers to this dual focus as a “bi-modal” character; the ATS-V is a vehicle in which you can run hot lap after hot lap during the day, and then drive from the racetrack to the country club that night.

Cadillac offers the ATS-V exclusively with rear-wheel drive, in both coupe and sedan body styles. The base ATS’s rigid structure, communicative steering, and agile handling make it an outstanding sport sedan in its own right, but the ATS-V’s extensive list of enhancements take it to a whole new level. Obviously, the ATS-V gets some serious fortification under the hood. Instead of a 335-horsepower 3.6-liter V6 (the top engine choice in the regular ATS lineup), the ATS-V boasts a twin-turbo 3.6 that puts out 464 horsepower and 445 lb-ft of torque. The twin turbochargers supply 18 pounds of boost at their peak, and the whole setup delivers 90 percent of its peak torque from 2400 to 6000 rpm, so turbo lag is pretty much a non-issue. 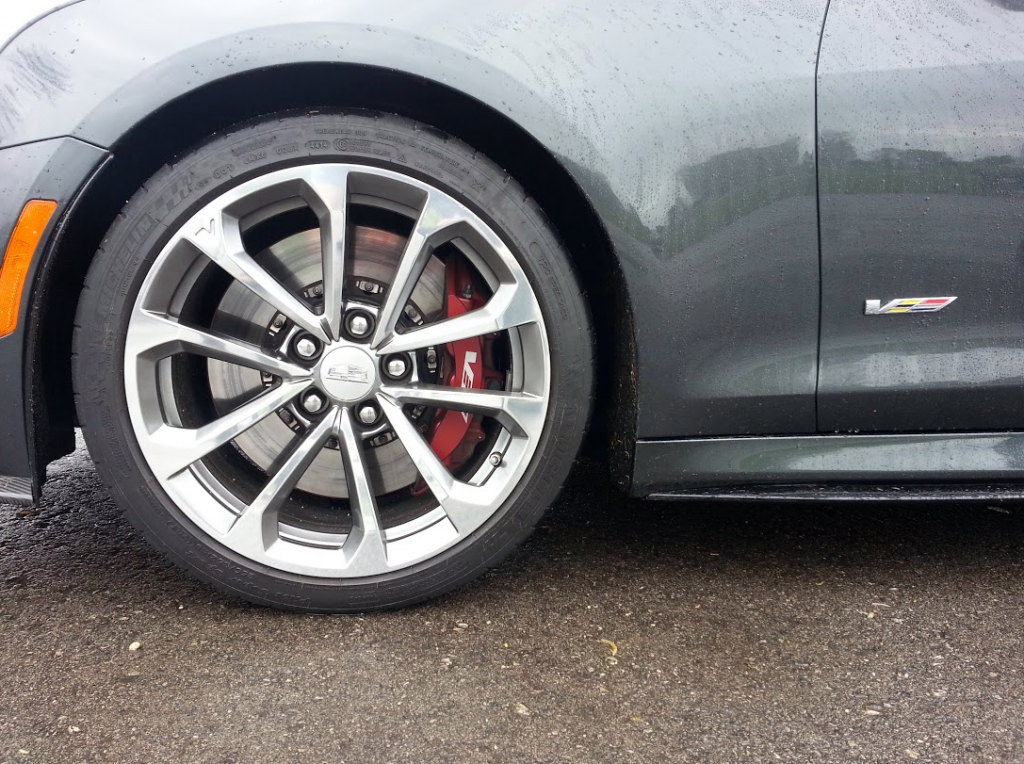 The ATS-V’s forged-aluminum 18-inch wheels are available in a choice of finishes. Red calipers on the Brembo brakes are a $595 option.

Modern-day automatic transmissions have advanced to the point that they enable faster acceleration than traditional manual gearboxes, which is the case with the ATS-V’s high-performance 8-speed automatic. However, Cadillac realizes that many enthusiasts insist on shifting for themselves, so it offers a stickshift as standard equipment (the automatic adds $2000). The ATS-V’s manual transmission is the same basic Tremec TR6060 6-speed used in the 2009-15 Cadillac CTS-V. Thanks to Active Rev Matching (which automatically blips the throttle for smoother downshifts), No-Lift Shift (which enables the driver to keep the throttle floored when shifting without the possibility of over-revving the engine), and launch-control features, the manual transmission can make novice performance drivers look like seasoned pros. The 8-speed automatic also has a launch control for optimum standing-start acceleration, along with magnesium paddle shifters on the steering wheel, a shorter first-gear ratio, and Performance Algorithm Shift, which automatically recognizes competitive-driving inputs and adjusts transmission behavior accordingly.

The ATS-V’s dual-mode exhaust system is similar to the setups in the Corvette and new Camaro; electronically controlled valves bypass the mufflers for a louder, extra-snarky exhaust note when you want it, and a more refined rumble when the cops are around. Selectable drive modes consist of Touring, Sport, Track, and, on automatic-transmission models, Snow/Ice settings—they dial in specific engine, suspension, and stability-control settings to suit driving conditions. 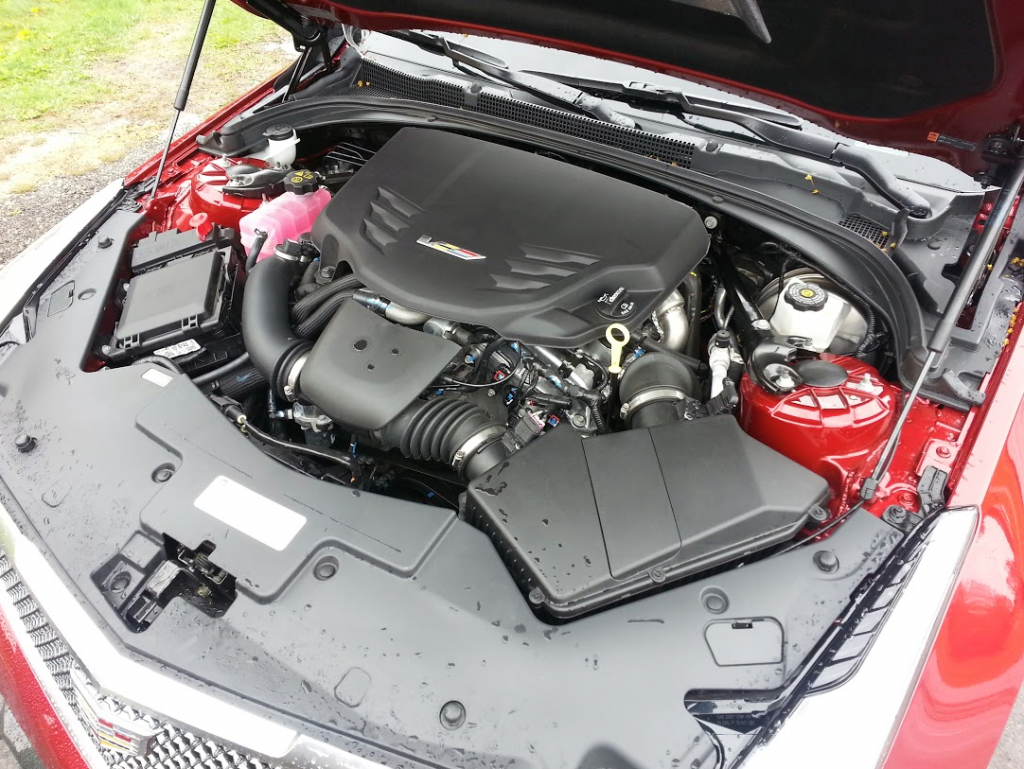 The ATS-V’s twin-turbo V6 shares some of its basic design with the 410-hp version in the Cadillac XTS VSport, but employs several high-performance upgrades to increase on-track durability and boost the horsepower output to 464.

The choice of a V6 powerplant is a departure for Cadillac’s high-performance V-Series, which have been powered exclusively by V8s up till now. Not surprisingly, this gives the ATS-V a different character than the neo-muscle car vibe of the previous-generation CTS-V (and for that matter, the 640-hp next-generation CTS-V that’s set to arrive later this summer.)

The ATS-V’s body structure and suspension got a thorough going-over to make the most of the additional horsepower. Structural fortifications such as a shock-tower-to-plenum brace and “V” braces for the engine compartment contribute to 25 percent greater structural stiffness than other ATS models, which are laudably stout to begin with. 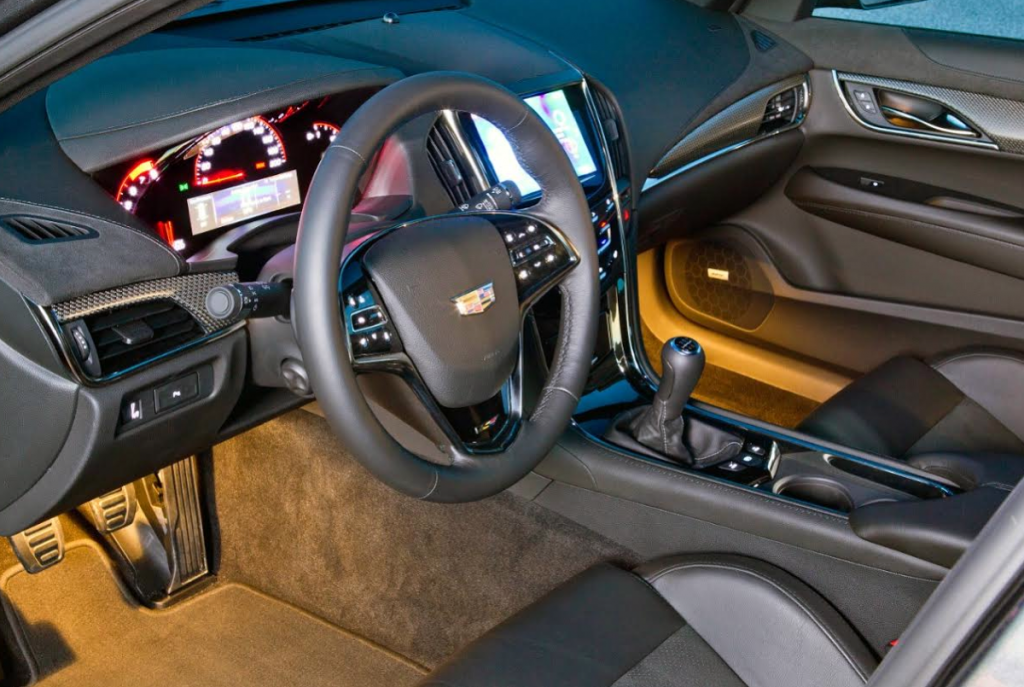 From an interior and exterior styling standpoint, the ATS-V sticks to Cadillac’s established formula for its V-Series cars. The focal point of the ATS-V’s cabin is a pair of available 16-way adjustable Recaro seats with faux-suede microfiber accents. The adjustable bolsters allow for a snug, supportive fit for aggressive driving, and a less confining feel for everyday driving. The seats’ bolster-memory feature means that tedious, multiple adjustments to get everything “just right” aren’t necessary. Other ATS-V-exclusive interior elements include carbon-fiber trim and unique gauge-cluster graphics and readouts.

Giving the exterior a more-aggressive look are a “chain-link” mesh grille, a carbon-fiber “power-bulge” hood with an air-extracting vent, a unique front fascia that is optimized for improved airflow and aerodynamic performance, a front splitter spoiler for improved downforce, and aero-optimized rocker panels and rear spoiler. Wider front and rear fenders cover the meatier rubber.

A $5000 Carbon Fiber package adds a more-aggressive front splitter, a taller rear spoiler, hood vent trim and rear diffuser, and composite rocker extensions. A Track package builds on the Carbon Fiber package with a low-mass battery, deletion of the standard floor mats and tire-inflator kit, and GM’s Performance Data Recorder–a clever bit of software wizardry that debuted in the latest Corvette Z06. It allows owners to record videos of road and track runs with in-cabin audio, along with performance-data overlays with telemetric info such as 0-60 times, lap times, and G-forces. The videos can then be played back through the CUE touchscreen (when the vehicle is in park) and/or shared via social media. We didn’t get the chance to try out this technology for ourselves, but it should make for a handy “game film” for improving one’s high-performance driving skills. 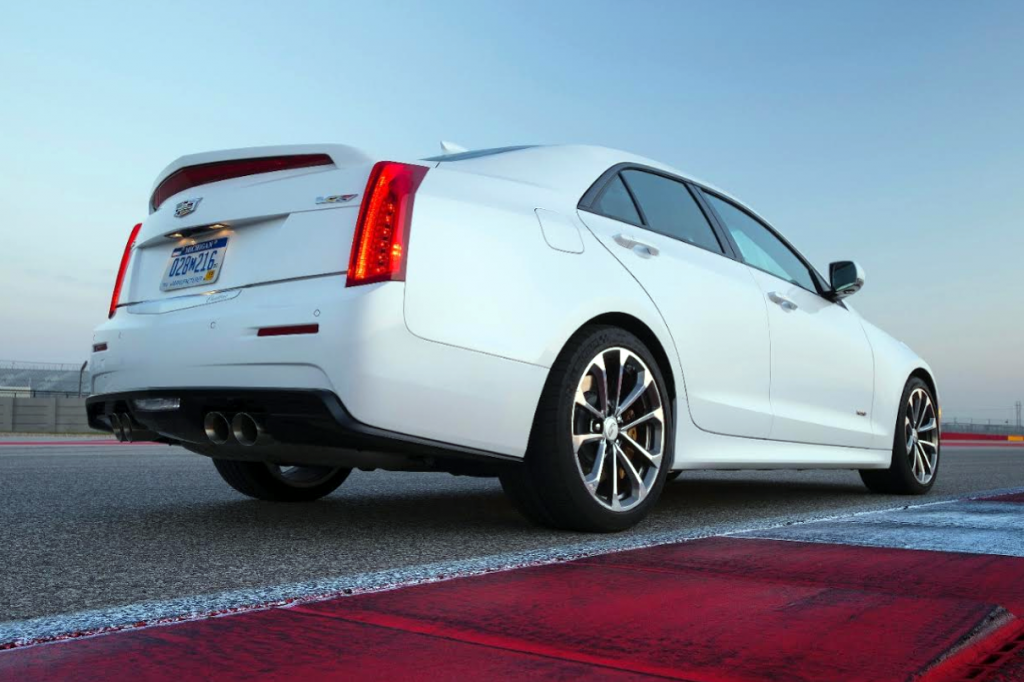 We did get the chance to drive manual- and automatic-transmission versions of the ATS-V sedan on some rain-soaked Wisconsin highways and back roads, and took a manual coupe for a quick lap around the Road America race course in Elkhart Lake, Wisconsin. The only area that the ATS-V comes up a bit short of its “bimodal” aim is in ride quality; even with the Magnetic Ride Control system in its softest setting, the ride is noticeably stiffer than other ATS cars. Still, it’s not a significant detriment for the enthusiast buyers, and it’s perfectly livable given the handling prowess on hand. Our only other gripe is with Cadillac’s CUE touchscreen infotainment system; we find it especially tricky to use while driving. Even with the system’s haptic feedback, CUE demands a prolonged look away from the road to make sure you’re tapping the right spot of the screen.

On track, the ATS-V feels lighter and a touch more nimble that the outgoing CTS-V, and every bit as fast. And it is, in fact, every bit as fast: The ATS-V’s stats of 0-60 mph in 3.8 seconds (with the 8-speed automatic), quarter-mile times in the low 12-second range, and 185-mph top speed are on par with the CTS-V’s numbers as well as those of the BMW M3 and M4. We didn’t notice any turbo lag, and the shifter on manual-transmission models works with crispness and precision. The ATS-V’s V6 is smaller, shorter, and lighter than CTS-V’s V8. It doesn’t have the same NASCAR-stocker roar, linear pull, and seemingly bottomless reserves of torque, but it nevertheless delivers ferocious acceleration and an aggressive exhaust note all its own.

ATS-V pricing starts at $61,460 for the sedan and $63,660 for the coupe. Toss in some desirable options, and the average transaction price will hover around $70K. That’s a lot of money for a premium-compact car, but the ATS-V can stand toe-to-toe with any performance car in its class, and several that cost thousands more.