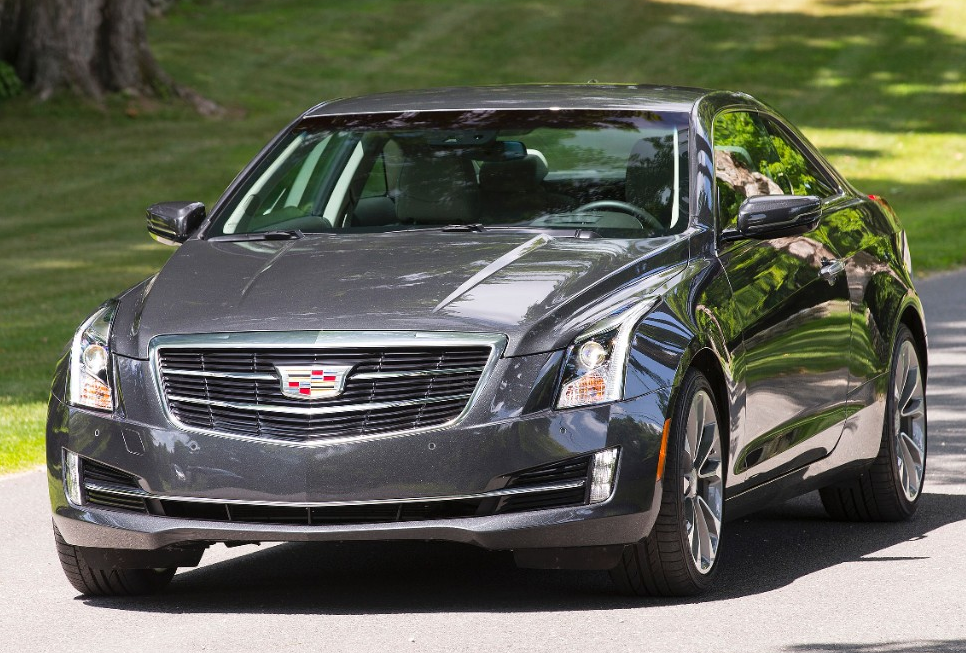 The Good: Good fuel economy, considering the horsepower on hand

The not so good: Severely cramped rear-seat accommodations

More on ATS prices and availability

When Consumer Guide® editors recently reviewed the Cadillac ATS sedan, we mentioned that one of the new-for-2015 talking points of our “Best Buy” in the premium-compact class was the availability of a coupe version. Now that we’ve driven them both, we’ve discovered a few differences—aside from that two-fewer-doors thing of course.

It certainly aided our comparison that both ATSes we’ve driven so far had the same 2.0-liter turbocharged engine, rear-wheel-drive layout, and Premium Collection trim level. However, our test coupe came with a 6-speed automatic transmission in place of the sedan’s 6-speed manual, and there are a few slight differences in standard equipment. 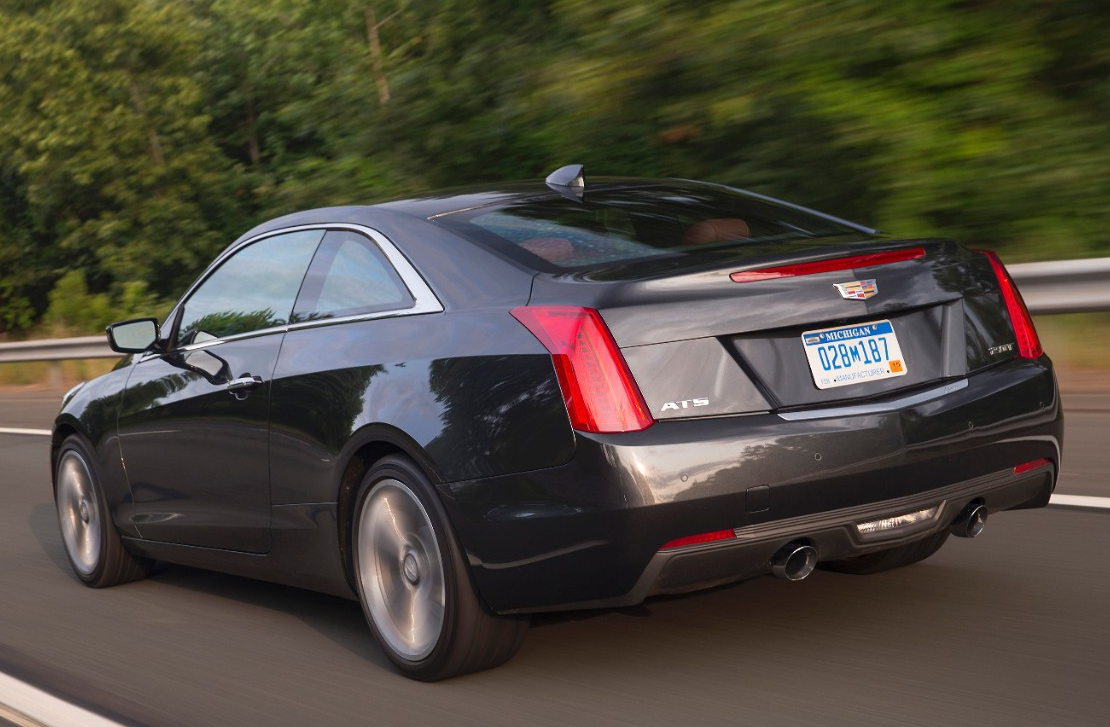 Our test car’s Majestic Plum Metallic paint is a $495 option.

The coupe is marginally longer, wider, and heavier—by 38 pounds—than the sedan, but not enough to put a drag on the lively feel of the 272-horsepower turbo engine. (Unlike the ATS sedan, the coupe comes with just one other available powerplant, a 3.6-liter V6.) The 6-speed automatic shifted smoothly and kicked down snappily, and paddle shifters are included for more personal control of the driving experience. In this driver’s hands, with the autobox and a slightly better balance of city/highway driving (52 percent city this time), the coupe was stingier with its load of premium fuel, consuming at a rate of 22.95 mpg during a trip of 213.8 miles. That was a good 4 mpg better than what I saw in the sedan. With the automatic, the 2.0-liter turbo in rear-drive cars is rated by the EPA at 21 mpg in the city, 2 mpg more than with the stickshift. 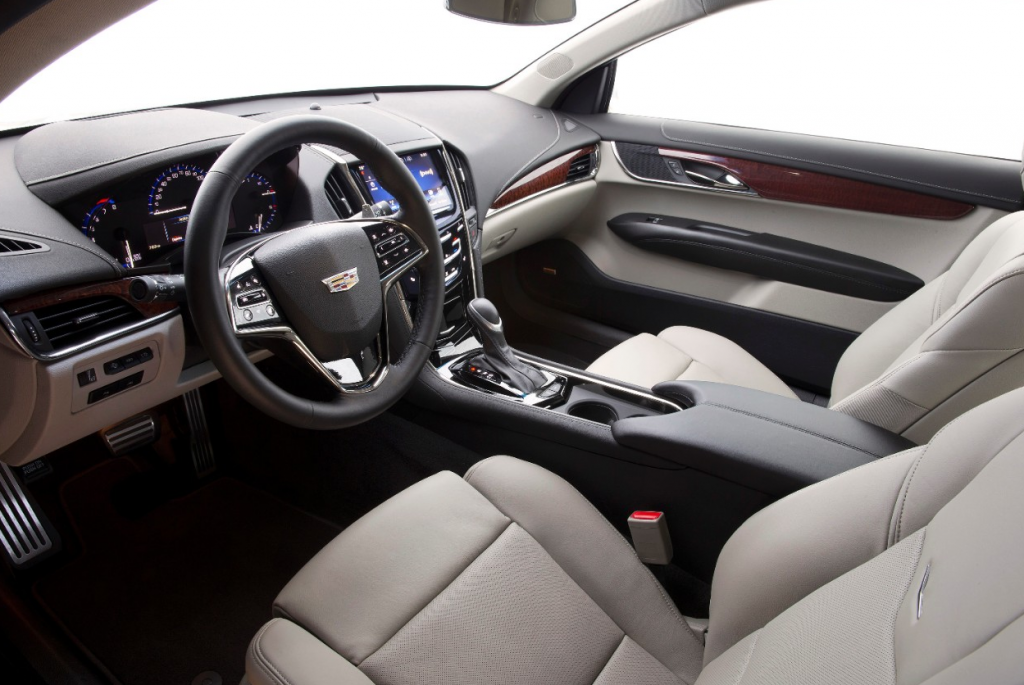 The ATS’s cabin looks and feels luxurious. Even large front-seat occupants will have room to spare.

As for differences in standard equipment, our test coupe came with summer tires, a 12-way adjustable front-passenger’s seat, heated front seats and steering wheel, and a 12-speaker Bose audio system. The tires had me crossing my fingers for 3 January days without snow. (Thanks, weatherman!) The other bits and pieces were appreciated. The coupe we drove featured a Jet Black interior highlighted by aluminum trim on the instrument panel and doors, one of 5 available combinations of color and highlight material. While rear seats fold in a 60/40 split in both ATS body styles, the coupe seat lacks the pass-through and pull-down arm rest found on the sedan. In the 2-door model, the space between the rear seats is filled by a raised padded area into which are built a pair of open cup holders.

The coupe did include the new inductive phone-charging mat, a late standard-equipment addition that our earlier sedan didn’t have. Otherwise, the coupe and sedan included the same upgraded OnStar communication system with a built-in Wi-Fi hotspot and added capability for the Cadillac User Experience—CUE—touchscreen infotainment system that are new for ’15. Instrument layout was the same in both cars. So was the fully independent suspension with magnetic damping that changes with the choice of “Tour” or “Sport” modes (we like Tour for most driving situations), and Brembo front disc brakes. 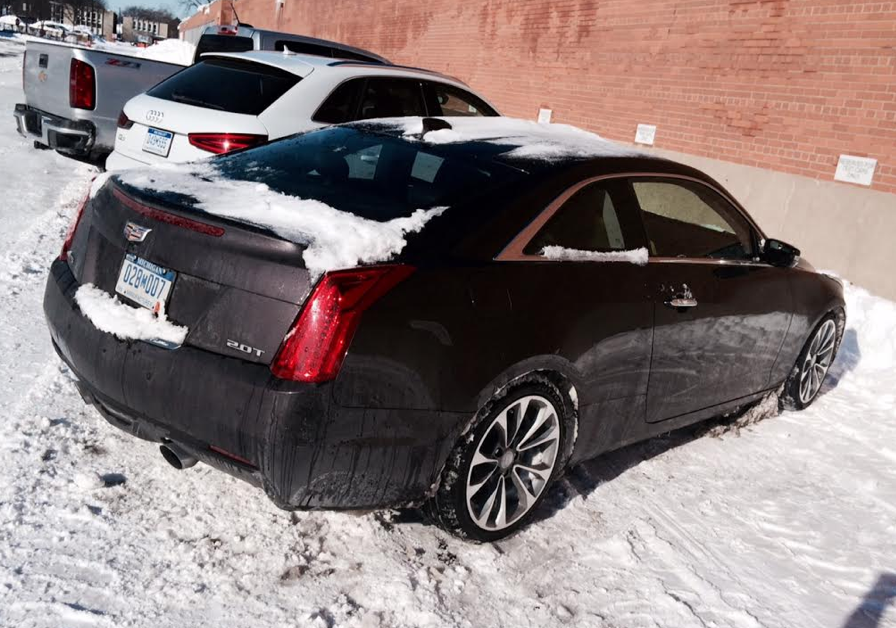 Even with rear-wheel drive and the standard “three-season” tires, our test ATS performed reasonably well in heavy snow.

ATS Premium appointments are very nice. I would have enjoyed them all the more in the coupe if not for a sore back that I suspect got that way from the car’s seating position. As might be expected, most interior dimensions are different in the 2-door and 4-door versions. At 42.3 inches, maximum front leg room in the coupe is just .2 of an inch shorter, but the relationship of the seat to the steering wheel and pedals seemed off kilter in a way that I didn’t notice in the sedan. I had to point my hips slightly to the left to align with the pedals, but twist my torso a touch to the right to grip the steering wheel. Ultimately, I wasn’t sitting square in what’s otherwise a comfortable seat.

Front head room is reduced by an inch in the coupe but there’s still acceptable space between scalp and headliner. For entry and exit, a little ducking—not much—is necessary to clear the roof.

Riding in the rear is another matter. While the sedan has marginal space for adults, the coupe has room for those who are only marginally adults. Head room is in short supply and entry/exit is pretty difficult. The front seats power forward some at the touch of a button, but it’s still a squeeze complicated by the decision to go under or over the seat belt. Personal storage is confined to pouches on the back of each front seat.

The coupe’s rear roof pillars are fairly thin, so they don’t present much of an obstacle to over-the-shoulder visibility—an improvement on the sedan in this respect. For a Cadillac coupe of this decade, visibility through the rear window is pretty good. The roof rake is not as extreme as in the ELR or the 2-door CTS-V, so there’s more glass area that shows in the mirror. The backlight is very wide, too, though rear head rests do cut into the view at the corners. Interior quiet matches the ATS’s luxury aspirations.

With a base price of $47,590, CG’s test car came to $48,585 with optional metallic paint and delivery. That was almost a grand more than the ATS sedan we drove. For that money, the coupe has a few extra conveniences and a dollop of added style at the expense of some passenger room and comfort. That may be a tough sell. When you spend that kind of money on a car, you’d like to think that it’s got your back.