Although it looks similar to the previous-generation Camaro, the 6th generation bows in smaller, leaner form with more-powerful engines and numerous new features.

This was one press preview that was as much about the journey as it was about the car.

That’s not to say the car itself wasn’t worthy of our undivided attention. It’s just that this particular car isn’t one you just “drive”; it’s one you “experience.”

The car in question, of course, is the redesigned 2016 Chevrolet Camaro.

The preview plan was simple at its core but complex in its execution: Have journalists drive the new Camaro through all 48 contiguous United States, Facebooking and tweeting as they go.

Under the best of circumstances, a press preview is a logistical nightmare. Dozens of auto journalists jet in from all parts of the globe to rendezvous at a given hotel for a 7pm dinner. Then it’s a matter of rounding them all up the next morning (some after spending much of the night in the de rigueur hospitality suite partaking of free libations) for a press briefing, after which you stick them in cars, give them directions, and pray for the best. Those who make it through are corralled again for dinner. Those who don’t … may require special attention. “Herding kittens” doesn’t begin to describe the mayhem. 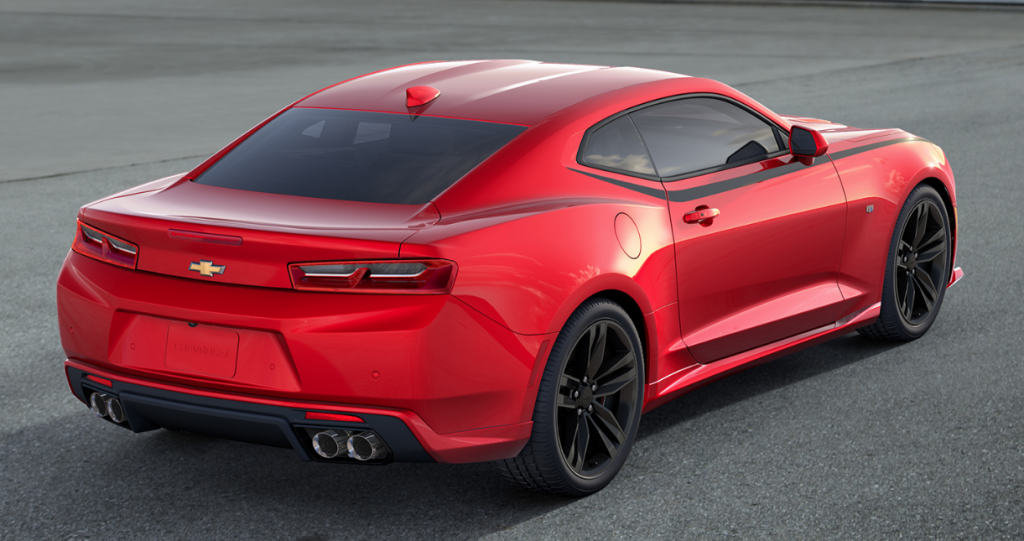 And then there’s this press preview. Ditto all the above, but after you stick them in cars, don’t give them directions; just tell them to “Find New Roads” (the theme of the entire exercise). Then do it again … 16 more times. (Rumor has it that in one instance, the “road” someone found wasn’t actually fit for vehicular excursion, necessitating a panicked call for vehicular extraction. And some body work.)

My leg ran from Dallas, TX to Albuquerque, NM – about 650 miles via the most direct route, which is not what I took … though some of that wasn’t intentional.

Prior to leaving for Dallas, I’d printed out a few maps of the general area (yeah I know; so “last century” of me), and honed my travel plans the night before I started out. Chevrolet had kindly included numerous points of interest that were largely car related, with some being along famed Route 66, the longest stretch of which runs through Oklahoma.

At dinner the previous evening, I asked some of the folks at the table what route they were planning to take. Some aimed to go north into Oklahoma to catch the OK Route 66 Museum and POPS restaurant (which sports a 66-foot-tall pop bottle out front), others across southern Texas to hit a stretch of road with the highest posted speed limit in the U.S. (85 mph) on their way to White Sands National Monument, the world’s largest gypsum dune field and a superbly picturesque photo setting (according to someone who’d already been there). Either of those circuits would make for a very long drive to Albuquerque (a city name I could never come close to spelling right without the help of a spell checker), but it turned out that most of the other journalists had either paired up with another one or brought a photographer/significant other along. I, on the other hand, was driving solo, so my travel plans were a little less ambitious: head north to Oklahoma, cut across the southern boundary, drop back into Texas, and make a beeline for Albuquerque. Which was probably a good thing. 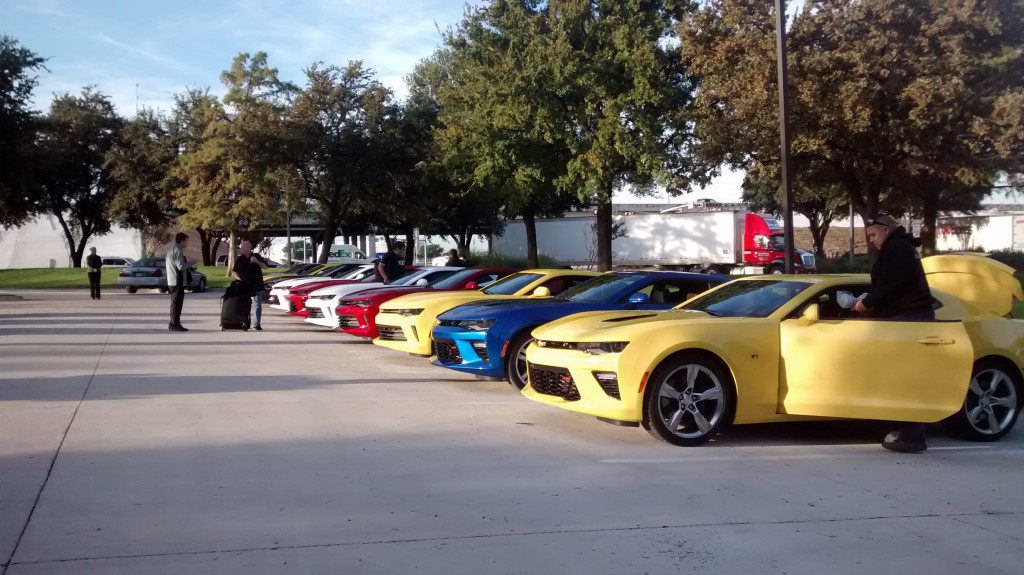 The luck of the draw put me in the yellow RS in the middle, which was powered by a rumbling V6 and slick-shifting 6-speed manual transmission.

After a morning breakfast, we drew keys out of a hat to determine what car we’d drive. The key I drew opened an RS with the 3.6-liter V6 and 6-speed manual transmission – in eyeball-searing yellow.

As I walked across the parking lot to the car, I passed a table chock full of road snacks. While my intention was to dine at the greasiest-spoon diners I could find along the route (with preference given to those serving BBQ), I grabbed a bunch of breakfast bars and a couple bottles of water, “just in case.” As it turned out, I was very glad I did.

For ease in finding any landmark we chose to visit, we were encouraged to use our vehicles’ OnStar assistance system to download turn-by-turn directions. So after settling into the car, I set my first destination for the town of Marietta, Oklahoma, just across the Texas state line on Route 35. After a reassuring voice informed me those directions had been downloaded, I moved the Camaro’s slick shifter into first gear, clicked off the electronic parking brake, let out the smooth clutch, and idled my way toward the street.

I made my first wrong turn leaving the parking lot. Seems “Cami” (the name I gave the melodious female voice of my navigation system) hadn’t yet gotten her bearings, leaving me to rely on my own stupefyingly bad sense of direction. After hearing continuous pleas to “Make a legal U-turn” (something that would be repeated frequently throughout the trip), I finally found the entrance ramp to Route 35 East. Which, as it turns out, was conveniently located directly across from the hotel. 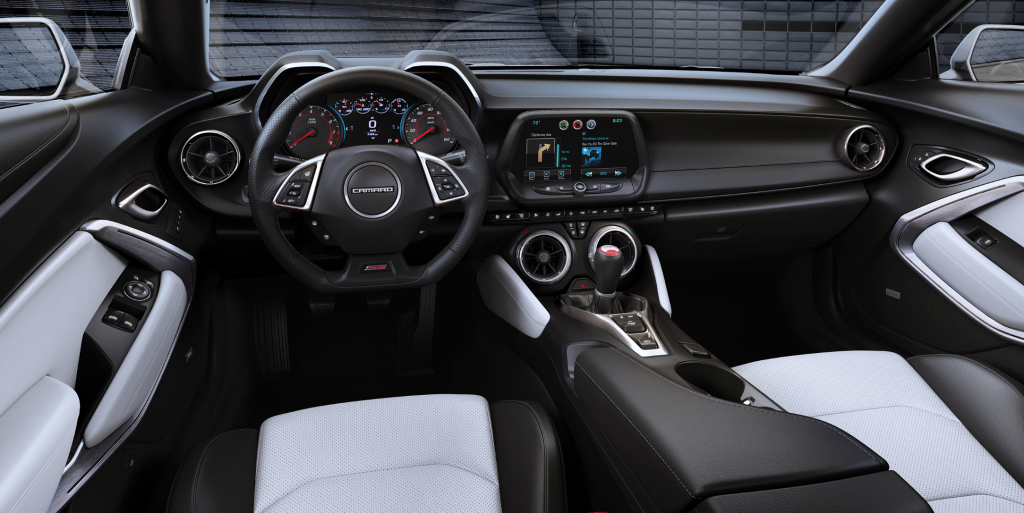 Interiors maintain some previous styling cues, and are offered in some bright contrasting colors.

With that auspicious start, I was somewhat relieved when I passed a sign welcoming me to Oklahoma. So, it seemed, was Cami, who upon my arrival into Marietta proudly announced (with perhaps just a touch of relief herself) that “You have reached your destination.” From there I took directions into my own hands and headed West on Route 32.

If you’re thinking of likewise tracing the southern border of Oklahoma in search of quaint small towns and picturesque scenery … think again. There’s pretty much nothing there. Oh, it was a nice enough drive, but my hopes of hitting locally flavored greasy spoons were repeatedly dashed as I passed towns whose names on the map were bigger than the towns themselves. Randlett, on Route 70 near the intersection of Highway 44 – a main north-south thoroughfare – turned out to consist of one building, and it was abandoned. Fortunately (as my bladder was about to burst), there was a public restroom out back. Or at least there is now. 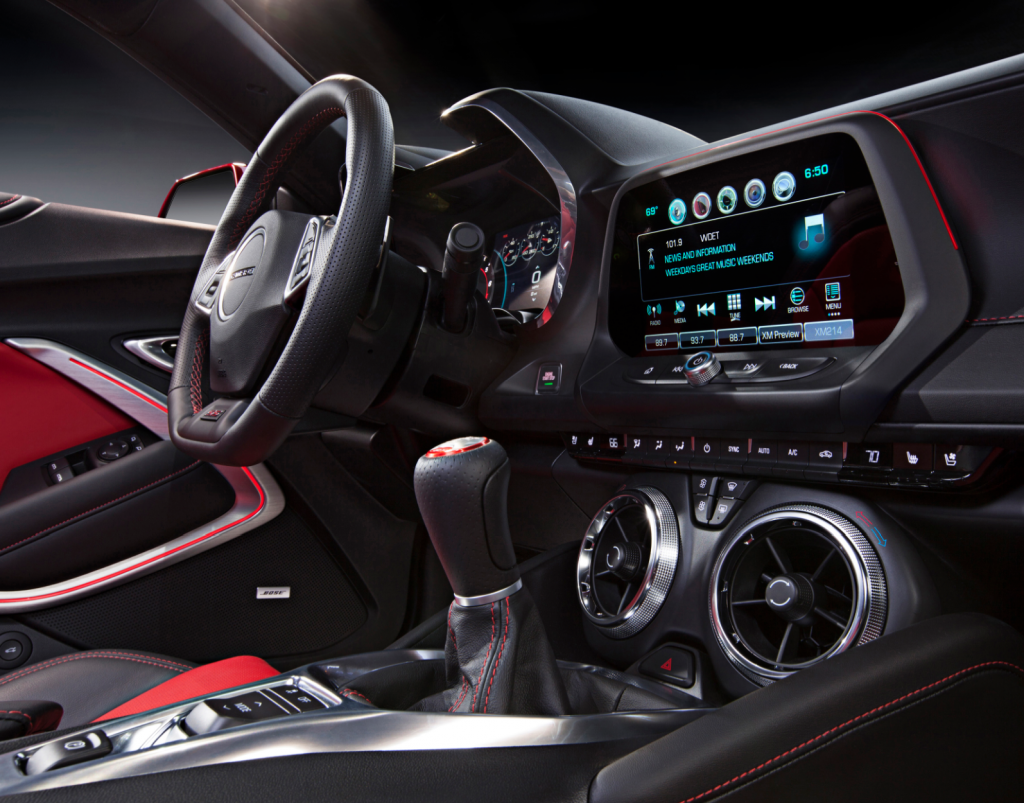 One interesting interior touch is that the bezels of the round center vents rotate to adjust the temperature. Available features include Chevrolet’s MyLink infotainment system, Apple CarPlay, and 4G LTE WiFi capability.

More disappointment greeted me in Grandfield and Davidson. What in the world do these people do? I’d see the occasional house or farm, but I never saw so much as a grocery store, let alone a BBQ joint. And it wasn’t for lack of looking. I called OnStar a couple of times to see if the friendly voice on the other end of the line could dig something up, but after some long “holds,” the voice always came back with nada. Surely it was simply a matter of cruising around the area to find somewhere … anywhere … to eat, but after much searching, I finally gave up and finished off the snack bars I’d been picking at along the way (so as not to ruin my appetite, don’tcha know). It was also about this time I ran out of water.

Problem was, daylight was waning (we had just switched off Daylight Savings Time), and one of the points of interest I was determined to see was the famed Cadillac Ranch outside Amarillo – roughly 150 miles away. So while Texas Route 287 went through several towns hosting promising eateries, I couldn’t afford the time to partake.

As I was closing in on Amarillo, I once again called OnStar for assistance in finding the Ranch. It would have been easy to miss on my own, but the downloaded directions took me right there. 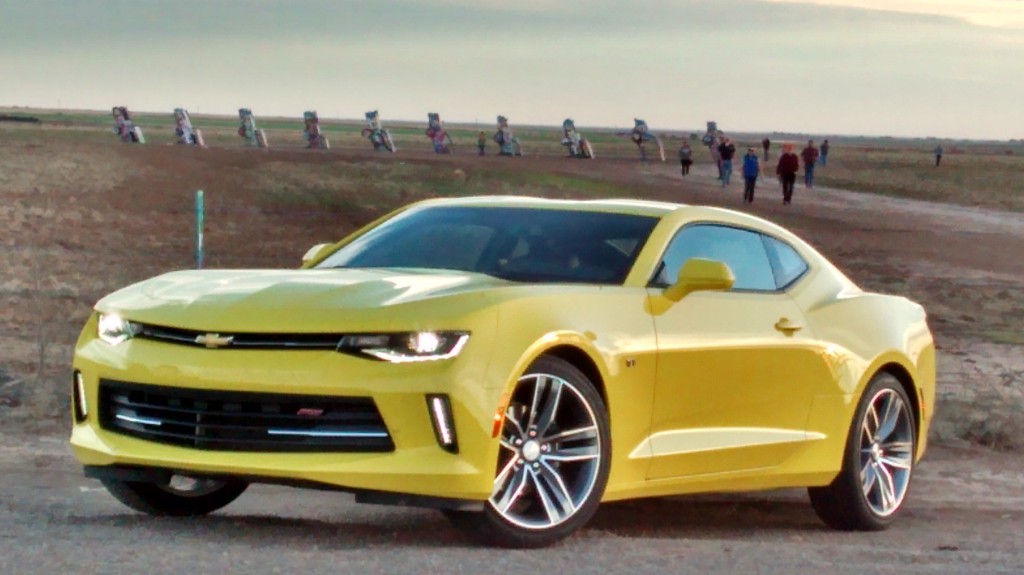 One of the highlights of the trip was my first visit to Cadillac Ranch outside Amarillo.

Cadillac Ranch is an automotive Mecca of sorts. Consisting of ten 1949 to 1963 Caddys planted nose down in an empty field, it originated in the mid 1970s as an art project. Since then, the cars have been stripped of parts and “decorated” with graffiti – numerous layers of it – and several artists were seen adding their touches while I was there.

As I was leaving, a guy walked up and asked me about the car. “Mike” recognized it as a 2016 Camaro (which takes some knowledge, as the ’15 and redesigned ’16 don’t look that much different), and he said he noticed another one parked there – likely by a fellow journalist – as he was driving past on the highway. He took several laps around the Camaro and pronounced it a handsome beast, and even seemed to like the yellow paint – which did glow nicely in the sunset. He also directed me to one of my favorite restaurants.

When you’re hungry and in a hurry, there really isn’t a better “dine and 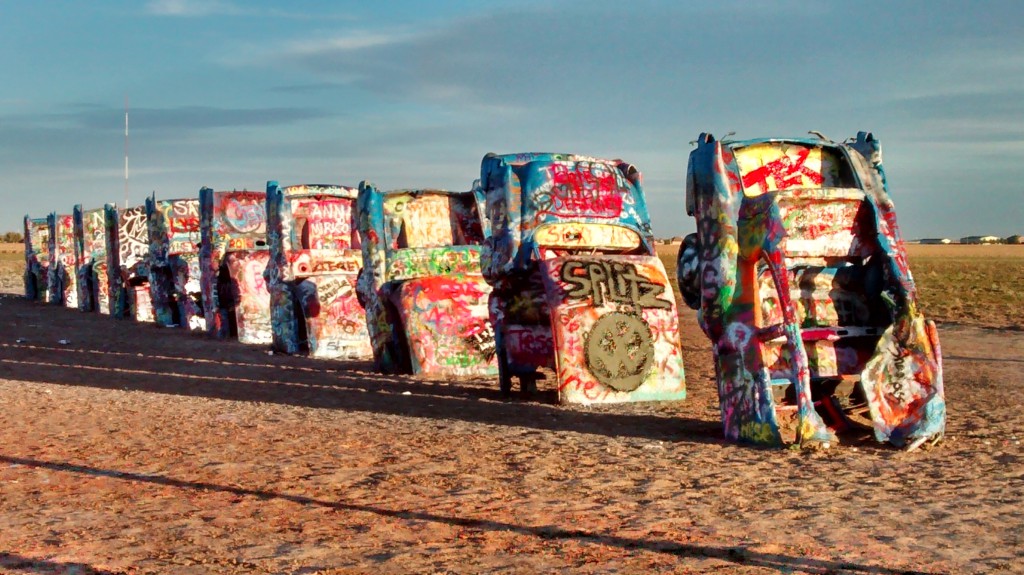 dash” spot than Golden Corral. (They take your money up front, so don’t think you’re going to dine and then dash without paying.) While I was really hoping for a self-promised BBQ joint, I wanted to make it to Santa Rosa, New Mexico, before stopping for the night.

The next morning I headed into a 40-mph headwind (not kidding; it almost blew me over when I stopped for gas) toward Albuquerque to check out the “Musical Road” on Route 66 just East of the city in Tijeras. Supposedly, there are rumble strips on the right side of the pavement (Eastbound only) that prompt your tires to sing “America the Beautiful” if you drive over them at 45 mph. I say “supposedly,” because I never found it. Just knowing it’s on Route 66 doesn’t really help you, as The Mother Road isn’t a continuous stretch in this part of the country; it’s just occasional bypass loops off Interstate 40. And apparently I didn’t take the right loop. Or maybe I did but didn’t see it, as I was traveling Westbound. Anyway, here’s the page on RoadsideAmerica.com that gives specific directions.

Again with the help of OnStar, I pulled into the hosting hotel in Albuquerque well ahead of my appointed airport-departure time. In all, I’d covered about 675 miles, never once listening to anything but the glorious exhaust rumble (which turns to a wailing shriek at high rpm) of the burly V6. And, of course, the occasional melodious guidance of Cami.