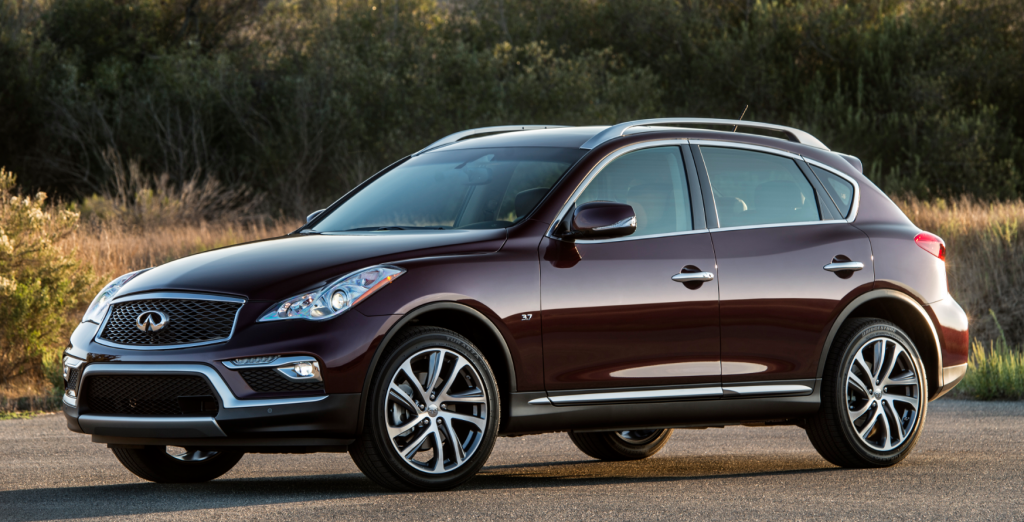 Infiniti’s almost invisible QX50 grows in wheelbase and overall length for 2016 while getting freshened styling and added features–and a lower price.

If you can’t picture the QX50 in your mind, you’re not alone. Infiniti renamed all its models back in 2014, and though the new designations follow a fairly logical pattern, many folks (including some journalists) are still struggling with the transition.

If it helps any, the QX50 was originally called the EX35. Still isn’t ringing a bell? That’s possibly because the vehicle saw few changes since its introduction for 2008, and thus kind of fell out of the spotlight that always seems to shine brightest on the New! Improved! models.

This is all despite the fact that the EX3 … er … QX50 had much going for it. Whereas most competitors are built on front-drive chassis with available all-wheel drive, the QX50 is based on a rear-drive chassis with available all-wheel drive. As might be illustrated by the class rivals sharing that configuration—namely the BMW X3, Mercedes GLK, and Porsche Cajun—this tends to be a more sporting setup, something visually insinuated by their long-hood proportions.

But the QX50 has one other notable advantage. While many rivals come standard with a 4-cylinder turbocharged engine, the QX50 comes out of the box with a potent (and immediately responsive) 325-horsepower 3.7-liter that is among the most powerful engines offered in the class. In fact, only one competitor—the Porsche Macan—offers a more powerful engine even as an option, and it’s significantly more expensive.

The stretched wheelbase contributes to a whopping 4.3-inch increase in rear-seat legroom, along with additional cargo space.

As might be expected, however, the QX50 also had its weaknesses. That long hood and short overall length left very little room for rear-seat passengers and cargo storage, and the QX50 also lacked some of the modern, high-tech features offered on newer rivals. But with the QX50’s 2016 “freshening,” Infiniti has addressed all of those issues.

In what seems a rather odd move, the vehicle—which otherwise didn’t change much aside from some minor styling tweaks—was stretched 3.2 inches in wheelbase and 4.5 inches in overall length, the result being an added 4.3 inches of rear-seat legroom (a huge difference) and 8.3 cubic feet of added interior volume. Usually the body modifications necessary to pull off such a feat would only be practical if the whole vehicle were being redesigned, but Infiniti was already selling this longer version in China.

Despite the fact that heated front seats and a moonroof are newly standard for 2016, the price of the QX50 dropped by about $550. The rear-drive version now starts at $35,445 including destination, while the AWD model starts at $36,845. Furthermore, that includes leather upholstery, driver-seat lumbar adjustment, dual-zone automatic climate control, and heated outside mirrors, items that are optional on some class rivals.

Options for both models come in four packages.

Next is the $2000 Premium Plus package that contains a navigation system, 7-inch touchscreen, 360-degree Around View Monitor, and XM traffic and weather. 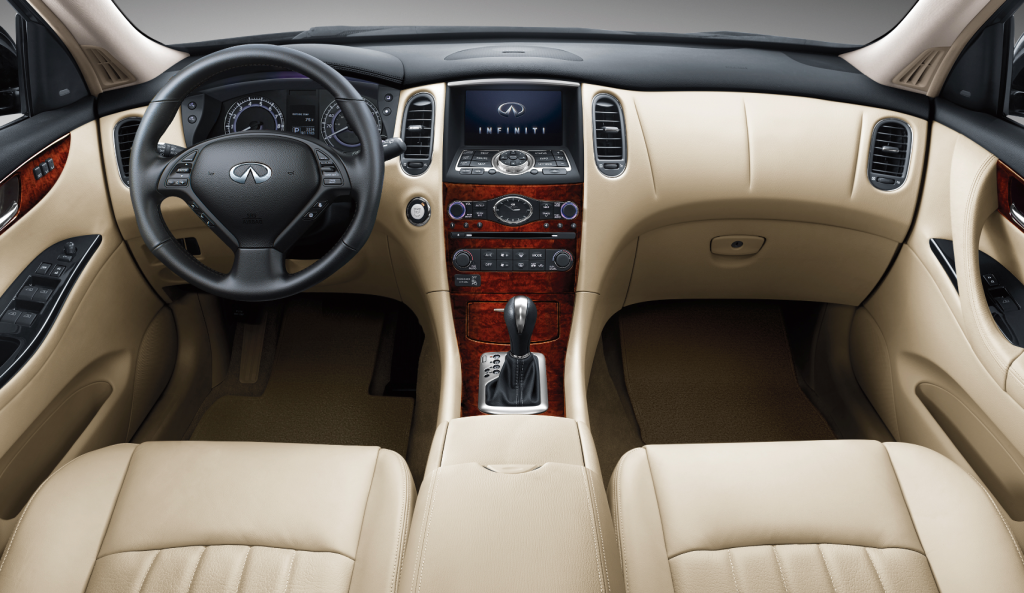 With the additional rear-seat room, the 2016 Infiniti QX50 goes from having one of the tightest back seats in the class to having one of the most spacious. Passengers over 6-feet tall should find plenty of headroom and legroom even if the seat ahead is pushed far back—and it goes really far back, as there’s sufficient stretch-out room in front even for tall folks.

Visibility is good to the front corners, quite restricted to the rear ones, despite the presence of little quarter windows in the sail panels. Thankfully, the standard rearview camera can be set to show a 180-degree view, which covers much of the blocked area and also allows seeing both ways down a parking-lot aisle—a great feature. Visibility to the sides depends on how tall you are. Shorter drivers will likely find that the seatback overlaps the moderately thick side roof pillar to form a huge blind spot over their left shoulder, but taller drivers will probably have the seat set back far enough as to open a gap between the two that gives them a fairly good view to the sides.

Interior storage space is modest at best. The glovebox is almost entirely filled by the owners manual. There’s a small covered bin in the dash with a 12-volt plug, two covered console cupholders, a small console box with 12-volt and USB plugs, and average-size map pockets in the doors. In back, the cargo area is wide at the rear, and folding the rear seat backs leaves a nearly flat and level floor. A nice convenience are the power-folding rear seat backs included in the Deluxe Touring Package. 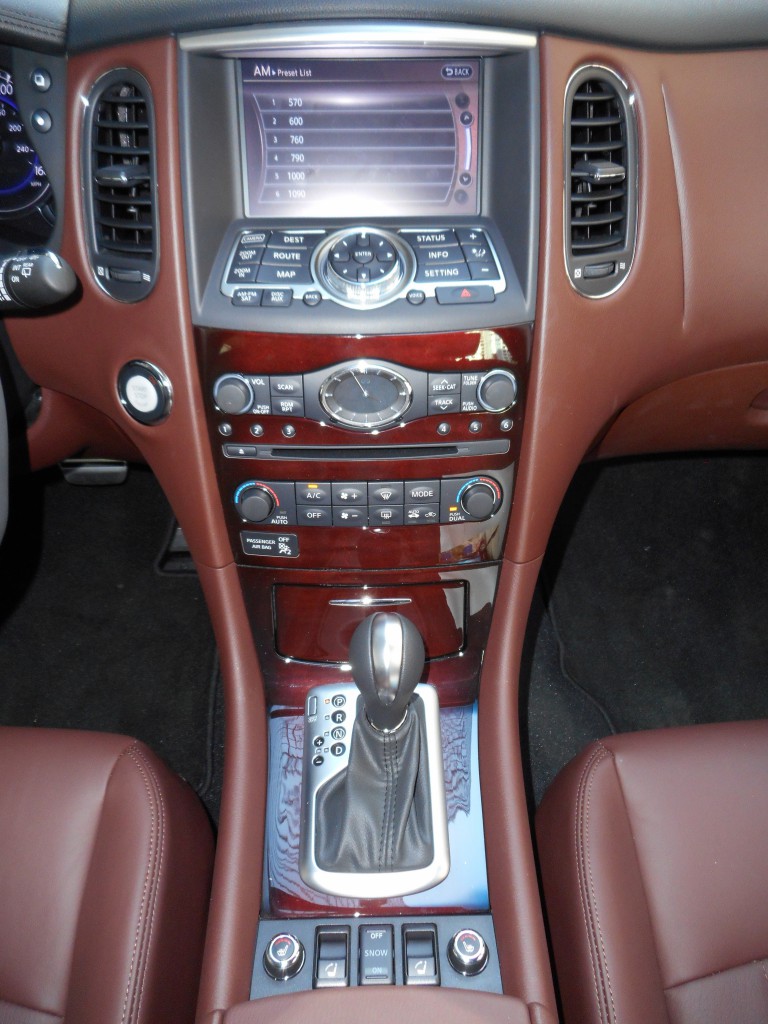 The QX50’s dashboard layout is a holdout of sorts, not only in the class, but also among other Infinitis. It has a very linear look (rather than a swoopy flamboyant one) and retains many “old school” buttons and knobs, though it also includes a touchscreen. What used to be an Infiniti interior trademark (that newer designs are sadly abandoning) is the horizontal dash panel that separates all navigation, phone, and some audio controls from the main audio and climate controls. We generally find this system easier to decipher and use than the touchscreen or console-knob/touchscreen interfaces on most other cars, though—as mentioned—even Infiniti is moving away from it.

But perhaps the most striking element of the interior is its upscale appearance—particularly with one of the two-tone color combinations.

Many surfaces are padded, including the dash top and face, door tops, and armrests. Large expanses of rich wood trim cover the control panel and door sides, with contrasting trim on the door armrests. While an all-black interior is available, the other choices are black/light tan and black/brown. The first and last were fitted to the two different test vehicles we drove, and the black/brown would look at home in a vehicle costing twice as much.

Our preview drive took place around San Diego, where the sky is almost always sunny and the roads are almost always smooth. Thus our on-road evaluation will be more complete after we test the vehicle on our home Chicago turf, where potholes and expansion heaves are every-block experiences. But some characteristics remain constants anywhere.

Much of our route weaved through canyon roads with plenty of tight turns. The 2016 rides nearly an inch higher than the outgoing model, which aids ground clearance and the driver’s view of the road, but works against handling which nonetheless feels capable and confident, if just shy of actually sporty (which the weight and height of vehicles in this class essentially preclude). Ride exhibited the firm compliance that’s about par for this class.

But as with the interior, one element of dynamics stands out. Whereas small-displacement 4-cylinder engines—turbocharged or not—tend to be a bit “soft” on take-offs, the QX50’s big V6 can bring the vehicle off the line with a powerful surge. Part- and full-throttle kickdowns are usually fairly quick, though there were a few instances where the 7-speed automatic seemed to hesitate just a bit. 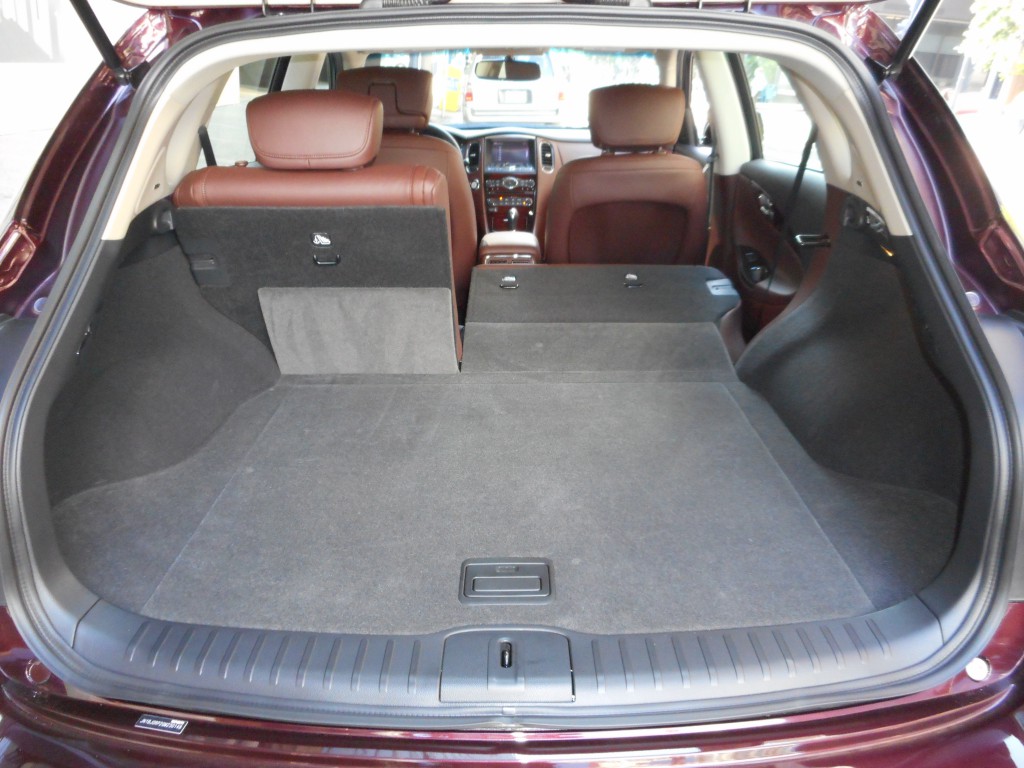 A 2nd-row power-folding seat back is offered, and the seat back rests level with the cargo floor.

What this all comes down to is that the QX50 is now a far better vehicle than its sorry sales numbers would seem to indicate. In that way, it’s kind of a “sleeper”—a vehicle often overlooked due to misconception or lack of exposure. Particularly if you’re attracted to sporty rivals such as the BMW X3, you might find the QX50 to be a luxurious, cut-rate alternative that gives up little to its price advantage.