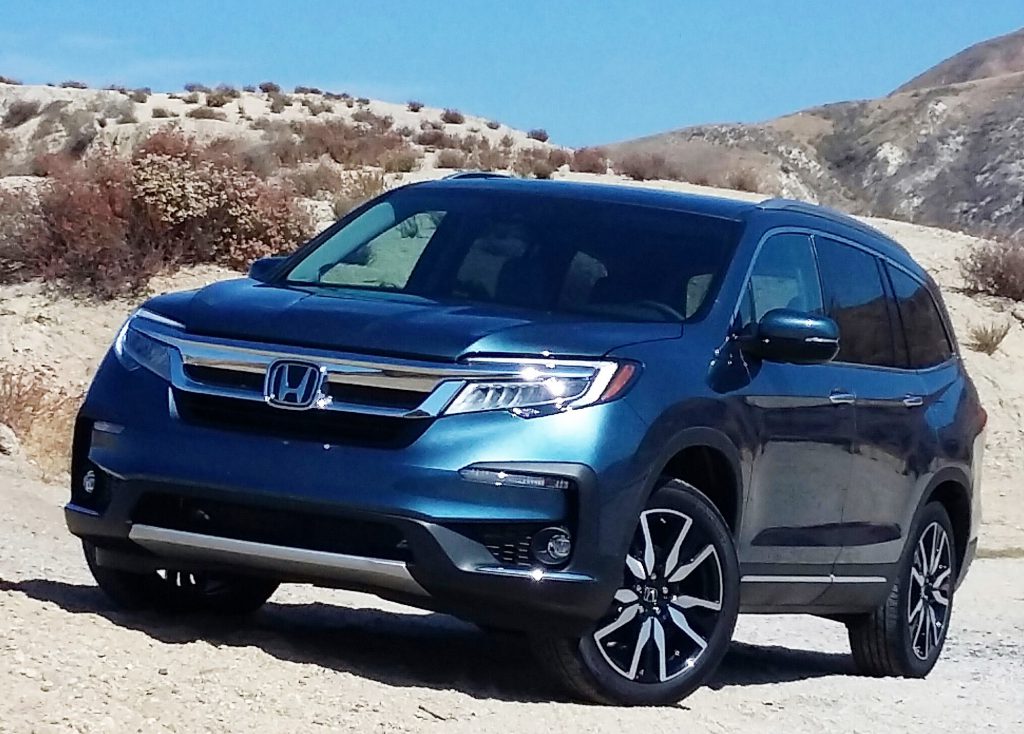 Honda’s popular midsize crossover has long been a Consumer Guide Best Buy, and revisions to the freshened 2019 Pilot only serve to make it better.

As this is a “refresh” and not a redesign, the Pilot platform and appearance haven’t changed much. Oh, the grille is different – taking on what Honda deems as a “more rugged” demeanor to reflect Pilot’s admittedly good off-road prowess – but the vehicle still looks and drives like a Pilot … which is just fine.

What’s changed are some of the features offered. Honda’s clever CabinTalk function – which lets front-seaters converse with those in back via the audio speakers or plugged-in headphones – migrates over from the Odyssey minivan, as does CabinControl, which allows some infotainment, climate, and navigation adjustments to be made through a smartphone app. Also newly available are the HondaLink telematics system, a hands-free power liftgate, wireless device charging, and power-folding auto-dimming outside mirrors. 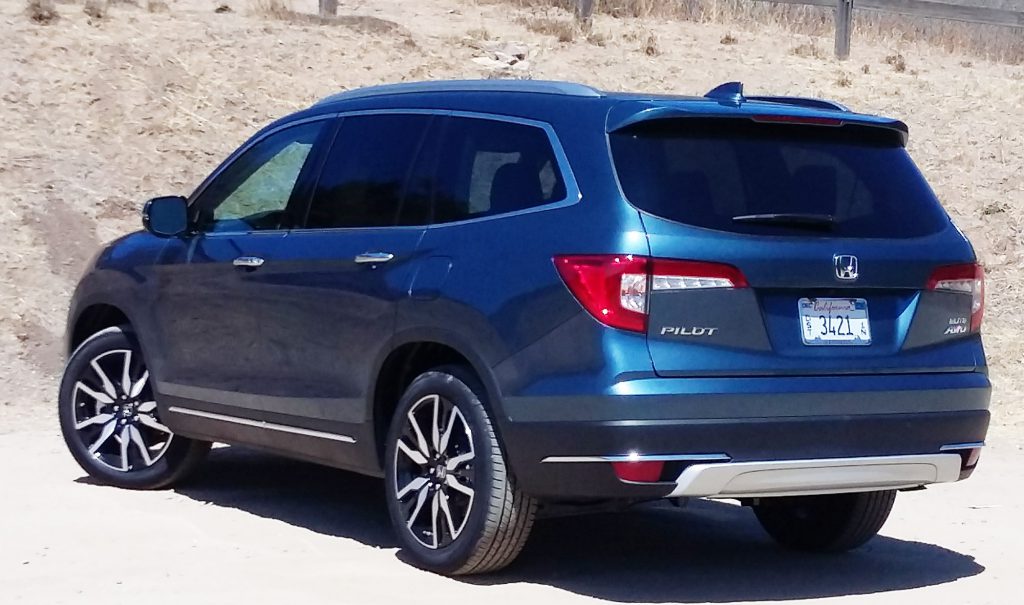 A power liftgate is included starting with the popular EX-L trim level, while the next-up Touring adds a new-for-2019 hands-free function.

Also new is that the Honda Sensing suite of high-tech safety features – which includes forward collision warning and mitigation, lane-keep assist, lane-departure warning and mitigation, adaptive cruise control, and automatic high beams – is now standard on all trim levels, though that really only affects the base LX model, as it was previously standard on all others. High-tech safety features added on the one-step-up EX include blind-spot and rear-cross-traffic alert, and the three-step-up-from-that Touring brings rear obstacle detection.

Also notable is that all six trim levels – LX, EX, EX-L, EX-L with Navi and RES (Rear Entertainment System), Touring, and Elite – add features for 2019, mostly ones that were “dropped down” from higher trim levels. For instance, the EX-L gains a memory driver seat and second-row sunshade, joining a power moonroof, power liftgate, HomeLink garage-door opener, leather upholstery, and a navigation system. The EX-L with Navi and RES gains CabinTalk and a Blu-Ray entertainment system. Added on the Touring are HondaLink telematics, hands-free power liftgate, and heated second-row seats. It also now offers the option of second-row captain’s chairs (reducing passenger capacity from eight to seven), which were previously available only on the line–topping Elite. New to the Elite are wireless device charging and power-folding/auto-dimming sideview mirrors; the Elite remains the only model to offer a huge dual-pane moonroof, ventilated front seats, heated steering wheel, and rain-sensing wipers. 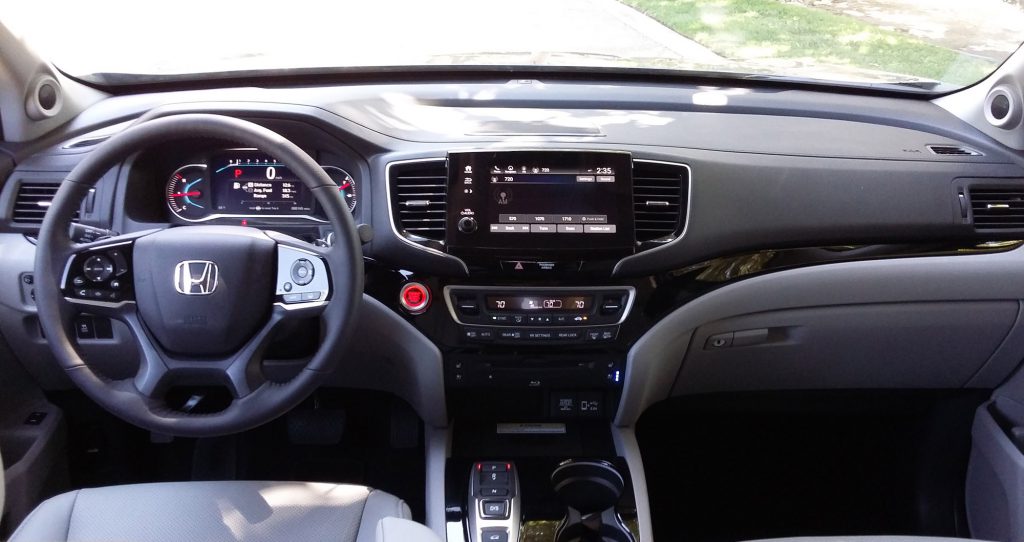 At least in the line-topping Elite, padded surfaces abound inside, and two-tone color schemes are offered. New for 2019 is a volume knob for the infotainment system (seen bottom left of center screen), a welcome addition.

One feature that comes in on the Touring (and continues into the Elite) is a 9-speed automatic transmission to replace the 6-speed used elsewhere. These models also include an engine stop/start function that shuts the 280-horsepower 3.5-liter V6 off at stops. The combination helps fuel economy and probably acceleration at bit, but at some cost. For one, if you quickly stab the throttle from a stop, the engine takes a beat to start, and if you push hard enough on the gas, the transmission – which usually starts off in second gear – drops down to first. One or both delays full-throttle launch for a brief moment, though it’s not noticed much in normal driving. Something that is, however, is that the 9-speed suffers from somewhat delayed kickdowns (and thus acceleration) when the throttle is stabbed in mid–speed driving. All the vehicles available at the preview were top-line Elites, and that problem remains, while lower-line models we’ve driven with the 6-speed have been better in this regard.

But while a bit annoying, that stands as one of the Pilot’s few faults – and then only in the top two trim levels. And it has an awful lot of strengths. 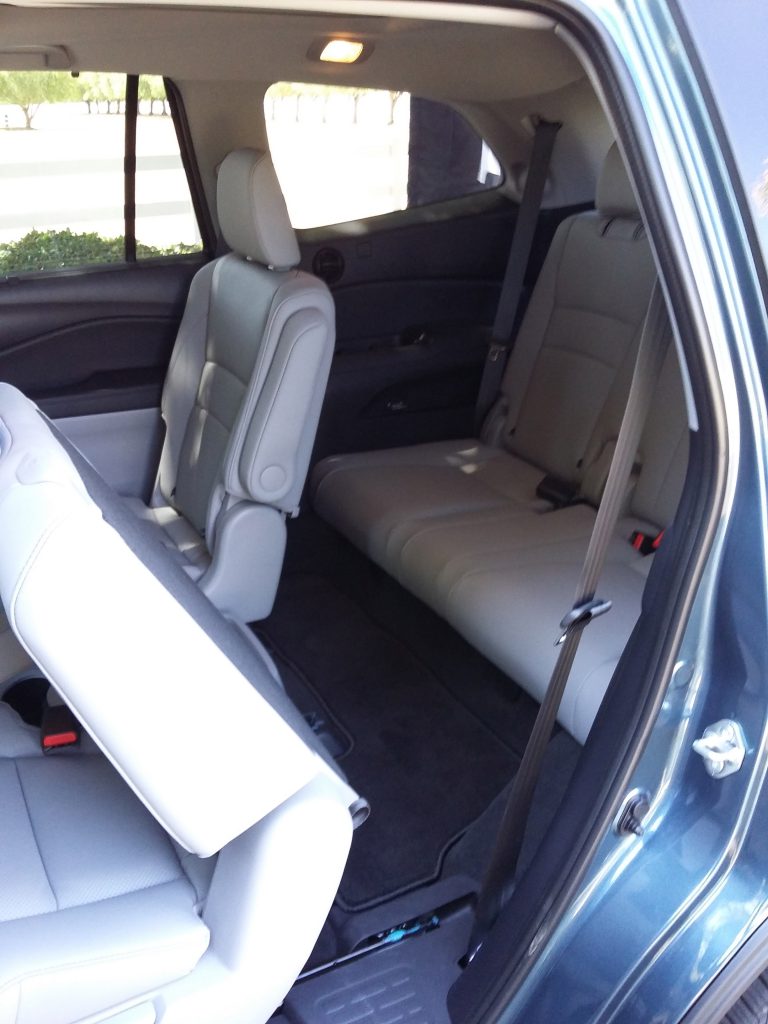 All but the base LX have a power-sliding second-row seat that — with the touch of a button — opens a large portal to the roomy third row.

Most midsize, 3-row crossovers have decent seating space for seven passengers — five adults and two smaller ones in the third row – but the Pilot offers seating for up to eight. Furthermore, my 5’9 frame fits easily (and there’s probably room for 6-footers) in the third row, and a power-sliding second-row seat (which is on all models but the base LX) opens up a decent-size pass-through with the simple touch of a button – a feature we find really handy, as even smaller kids can do it.

In terms of dynamics, the Pilot is at least competitive with the majority of 3-row midsize crossovers (which is to say, “good”), offering adequate acceleration, decent fuel economy, and a reasonably compliant ride, with handling perhaps being a touch better than the norm. And it’s also right up there in rear cargo and cabin storage space – the former highlighted by a large underfloor tray and available 12-volt outlet, the latter (at least in the Elites driven) by a huge console box, multiple USB and 12-volt plugs, and 2-tier door pockets with cupholders. 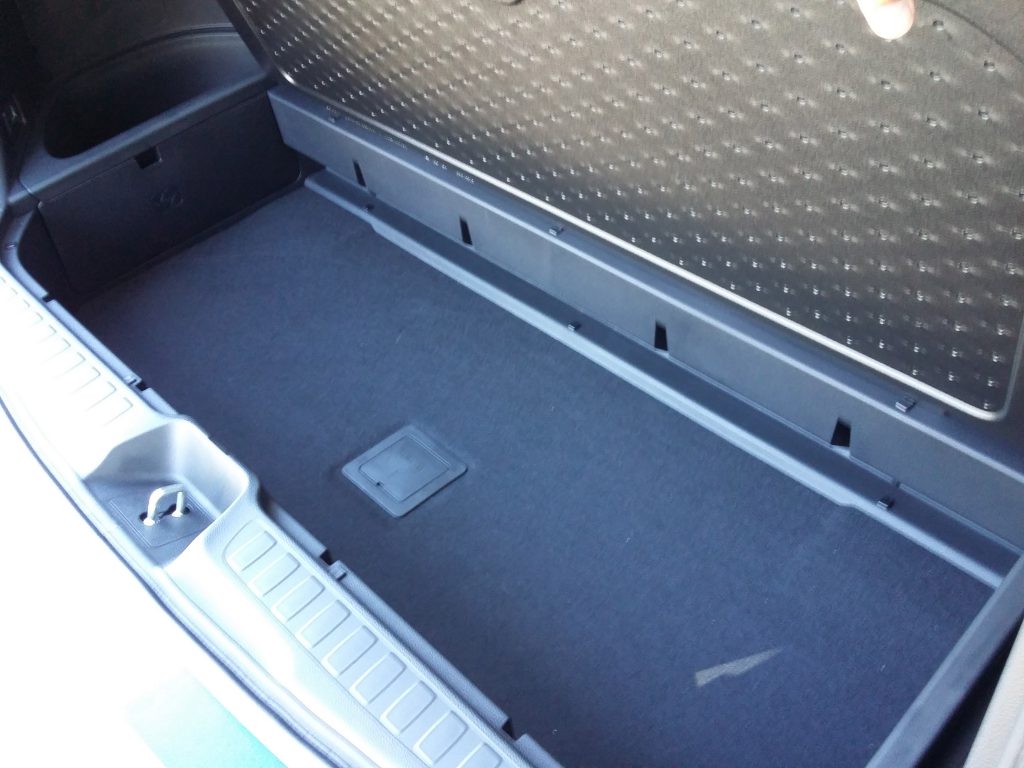 Beneath the cargo floor in back is a large storage bin flanked by sidewall pockets.

Visibility may well rate as top of the class. Not only are the front and side pillars commendably thin, but the view is good even to the rear corners. Furthermore, the rearview camera can be set to provide a 180-degree wide-angle view, which is great when backing out of parking spots, as you can see both ways down the parking-lot aisle.

One downside of the Pilot is that the control layout could be better – and in fact, is, at least compared to what it used to be.

For reasons I’ve never heard explained, Honda chose to go to a button-less, knob-less infotainment system a few years ago on some of its models. This left volume adjustment to be done through a vertical virtual slider, which was awkward at best. (Though there’s a duplicate volume control on the steering wheel, the slider still garnered a litany of complaints.) To its credit, the company has responded by at least adding a conventional volume knob to some of its audio systems, and the one on the 2019 Pilot is among them. However, climate adjustments are made through repetitive-step flippers or buttons, which aren’t as convenient as rotary knobs. 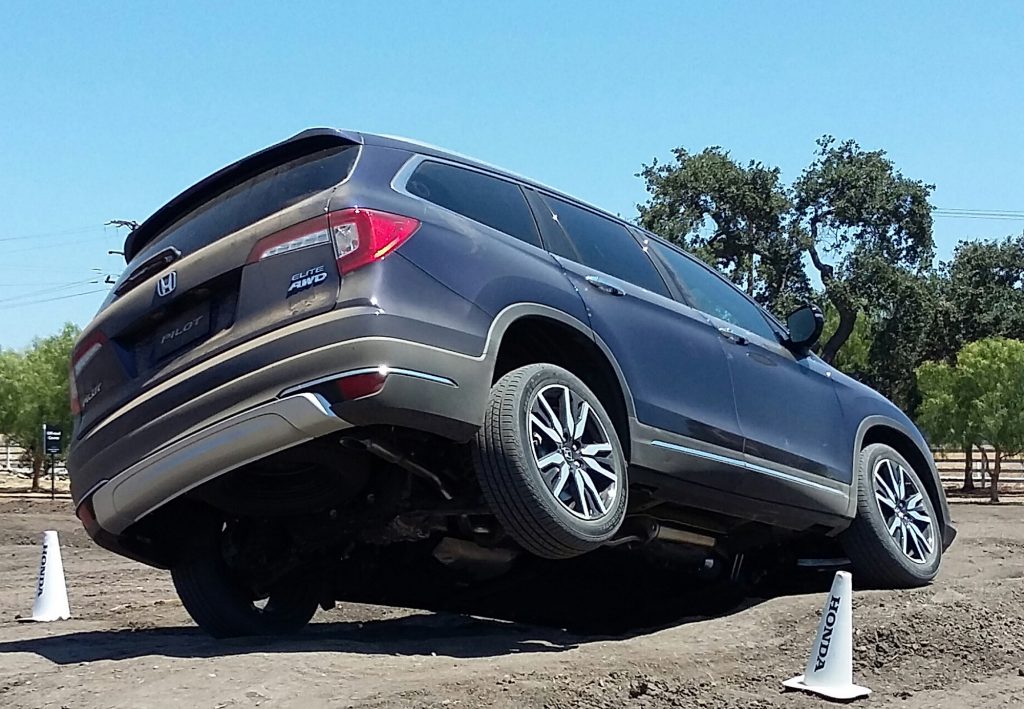 Our preview drive included a fairly challenging off-road course that proved the Pilot’s capabilities in the rough stuff.

That brings us to fuel economy and pricing. EPA estimates are 19 city/ 27 highway/22 combined with front-wheel-drive and the 6-speed automatic, 20/27/23 with the 9-speed. Opting for all-wheel-drive (available on all models and standard on the top-line Elite) cuts one mpg from those figures.

Honda’s Pilot has always offered a lot to like, and perhaps just as importantly, very little to dislike. Revisions for 2019 not only add more to the former, but also remove the “no volume knob” complaint from the latter. So if the Pilot was a really great midsize crossover before, the revised 2019 edition can only be considered a standout.