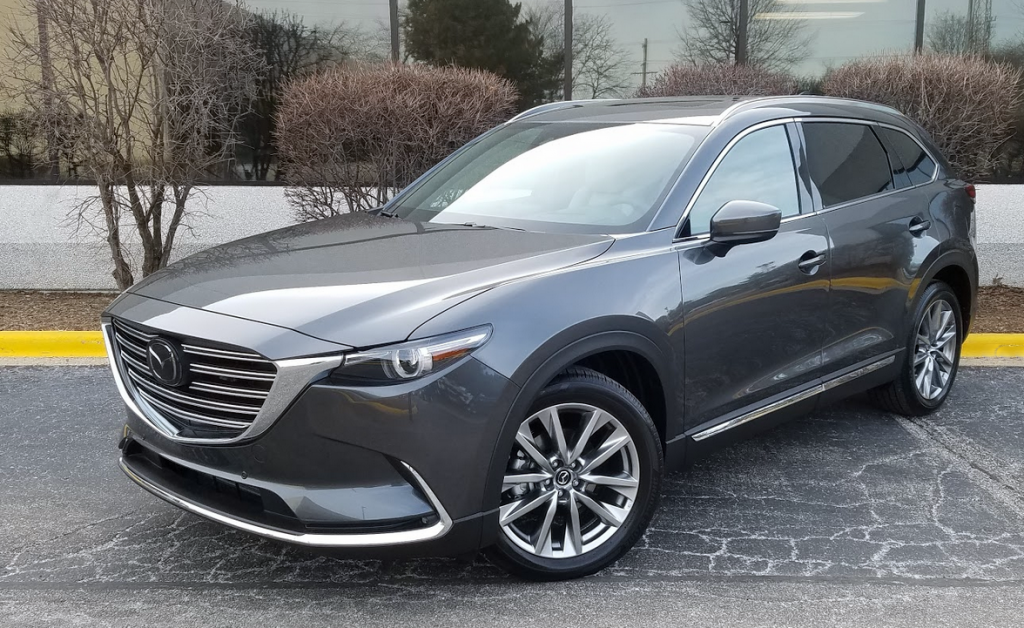 The not so good: Some tedious infotainment controls, not quite as spacious inside as some class rivals

After almost a decade in its original format, the second-generation CX-9 that bowed during 2016 was a breath of fresh air for Mazda’s 3-row crossover SUV. Now it is riding that breeze with continual incremental improvements. 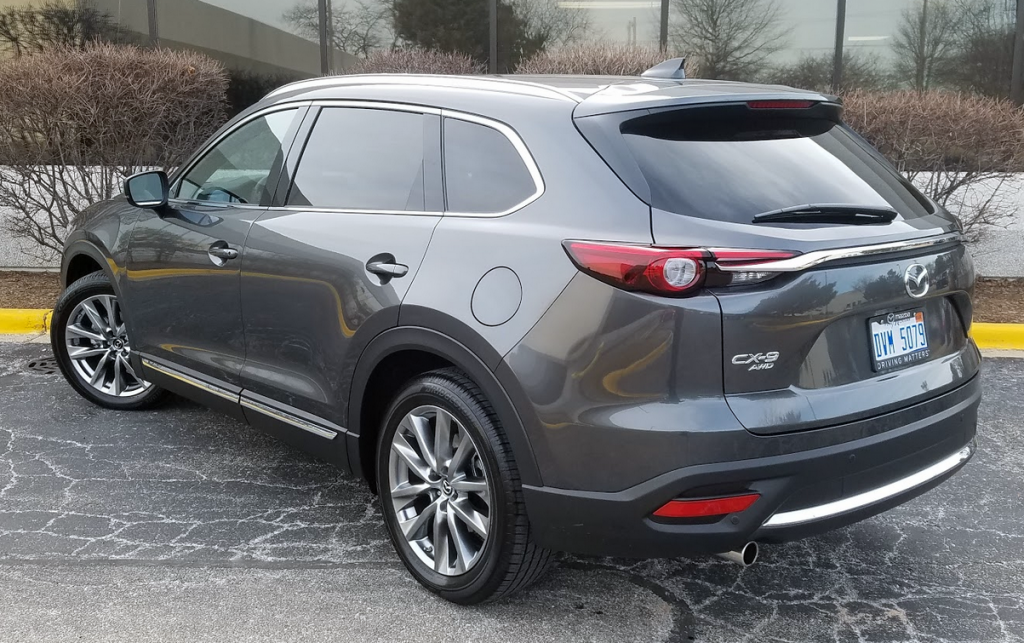 The 2018 CX-9 tacks on more across-the-board standard features. All models now come with Smart City Brake Support low-speed collision mitigation; blind-spot alert; rear cross-traffic alert; and G-Vectoring Control, which varies engine torque in response to steering inputs to improve steering feel and handling. While Smart City and the blind-spot and rear-traffic alerts have already been in the CX-9 program at one level or another since the gen-2 vehicle came out, G-Vectoring is new to the midsize SUV after having first appeared on the 2017 Mazda 3 and 6 sedans. 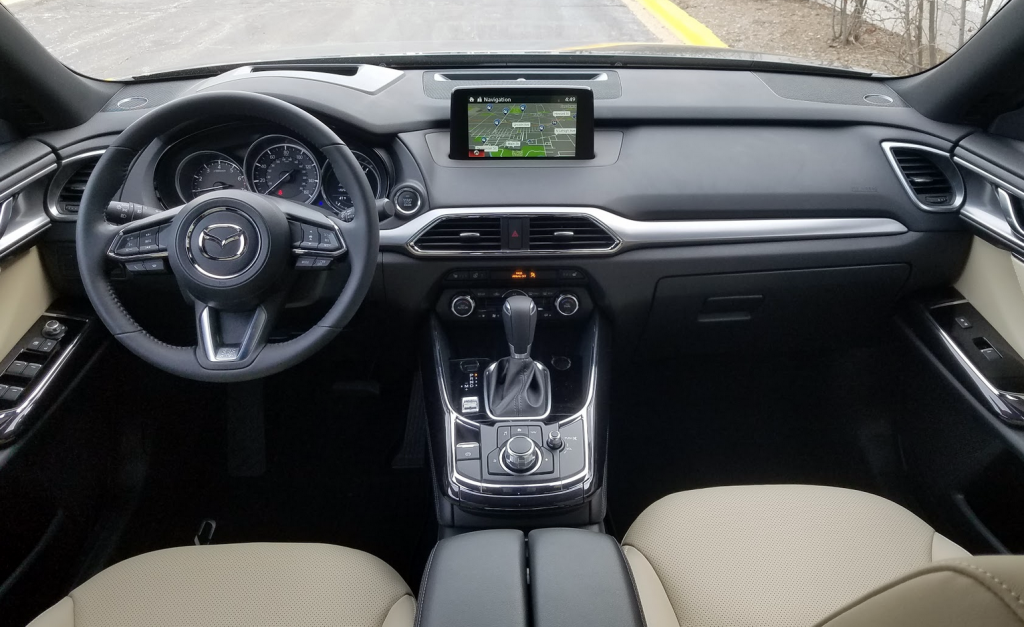 In Grand Touring trim, the CX-9 boasts a classy cabin ambiance, but some of our testers disliked the multi-step processes of the Commander Control infotainment interface, which utilizes a rotary knob located aft of the shift lever.

Model availability is unchanged, with Sport, Touring, and Grand Touring versions in a choice of front- or all-wheel drive, plus a deluxe all-wheel Signature model. Consumer Guide® editors drove an ’18 Grand Touring with the AWD driveline, a vehicle that starts at $43,210 with delivery.

The powerteam is familiar. It’s the same 2.5-liter turbocharged 4-cylinder engine and 6-speed automatic transmission that has served the CX-9 since the 2016 redesign. The engine still generates 250 horsepower when fed premium fuel (output with regular gas is 227 horsepower), and it makes 310 lb-ft of torque at 2000 rpm. Even with that quick-developing grunt, it seems the best performance from the 2.5 turbo is on the highway, where it cruises smoothly, and develops decent passing power. A selectable “Sport” mode delays transmission upshifts for somewhat livelier acceleration.

The EPA rates all-wheel-drive CX-9s at 20 mpg in city driving and 26 mpg on the highway. This tester saw 21.2 mpg after a stint of 211.3 miles, 62 percent of which was in city-type operation. That’s approximately midway—by about a mile per gallon—between what he got with a 2016 Signature and a 2017 Grand Touring.

The second-row seats recline and slide fore and aft to favor second- or third-row legroom. The dual screens of the optional rear-seat entertainment system ($1995) have a rather tacked-on look, but they work well enough. The third-row seat can accommodate average-sized adults for short trips, but it’s probably best suited for kids.

CG has liked the driving characteristics of the current-generation CX-9 from its arrival. The ride is cushy, with good passenger isolation from road bumps. Sport mode adds incrementally tighter steering and firmer ride.

Even at a step below the Signature (which costs $2045 more than a Grand Touring), the CX-9 has a quiet, upscale cabin. Soft, pliable surfaces are within easy reach on the upper half of the instrument panel and much of the door panels. Generous use of the aluminum trim substantially brightens the cabin. The only real complication to the control layout is the presence of Mazda’s Commander Control, with its console-mounted dial for functions that register on a display screen atop the instrument panel. Why someone (and Mazda’s not alone here) would create something that requires more steps—rather than fewer—to save radio presets is beyond us. Three-zone automatic climate controls use rotary knobs for temperature settings; mode and fan speed are governed by repetitive-step push buttons.

The CX-9 offers 14.4 cubic feet of cargo space behind the third-row seats, 38.2 cu. ft. behind the second row, and 71.2 cu. ft. with both the second- and third rows folded. The seat backs fold flat and level to create an easy-to-use load space.

For in-cabin storage, passengers can rely on a substantial glove box, a smaller console box with a split side-hinged top and digital-device inputs inside, an open cubby at the front of the console under the dash, and a pouch on the back of each front seat. Doors have large pockets with bottle holders. There are two exposed cup holders in the console, another two in the middle-row pull-down center armrest (which includes a shallow covered storage space), and a cup holder and open bin in each rear sidewall for the benefit of third-row passengers.

Head- and legroom are generous in the front and middle rows. Three adults can sit across the 60/40-split reclining second-row bench. Seats are supportive yet cushy in the first two rows. In the third row, seat-back padding is skimpier, seat cushions are low, and there is limited legroom. Tilt-and-slide second-row seats make it a bit easier to reach the back row.

Cargo room isn’t overly ample behind the third-row seats. The 50/50-split seats fold easily thanks to release levers in the cargo bay, forming a good-sized flat cargo floor. Second-row seats retract along the same plane to form a very long load platform, albeit with a gap of several inches between them and the rest of the cargo bed. With the second- and third-row seats down, the test CX-9 had room to hold a drop-leaf table and four wooden chairs.

Mazda made a compelling midsize crossover entry out of the CX-9 when it redid it a couple years ago. It has spent the time since making it a better value.

The CX-9 ups its value quotient for 2018 via the addition of a couple desirable new features. With its engaging driving personality, upscale interior, and appealing styling, the CX-9 remains a compelling three-row midsize SUV contender.