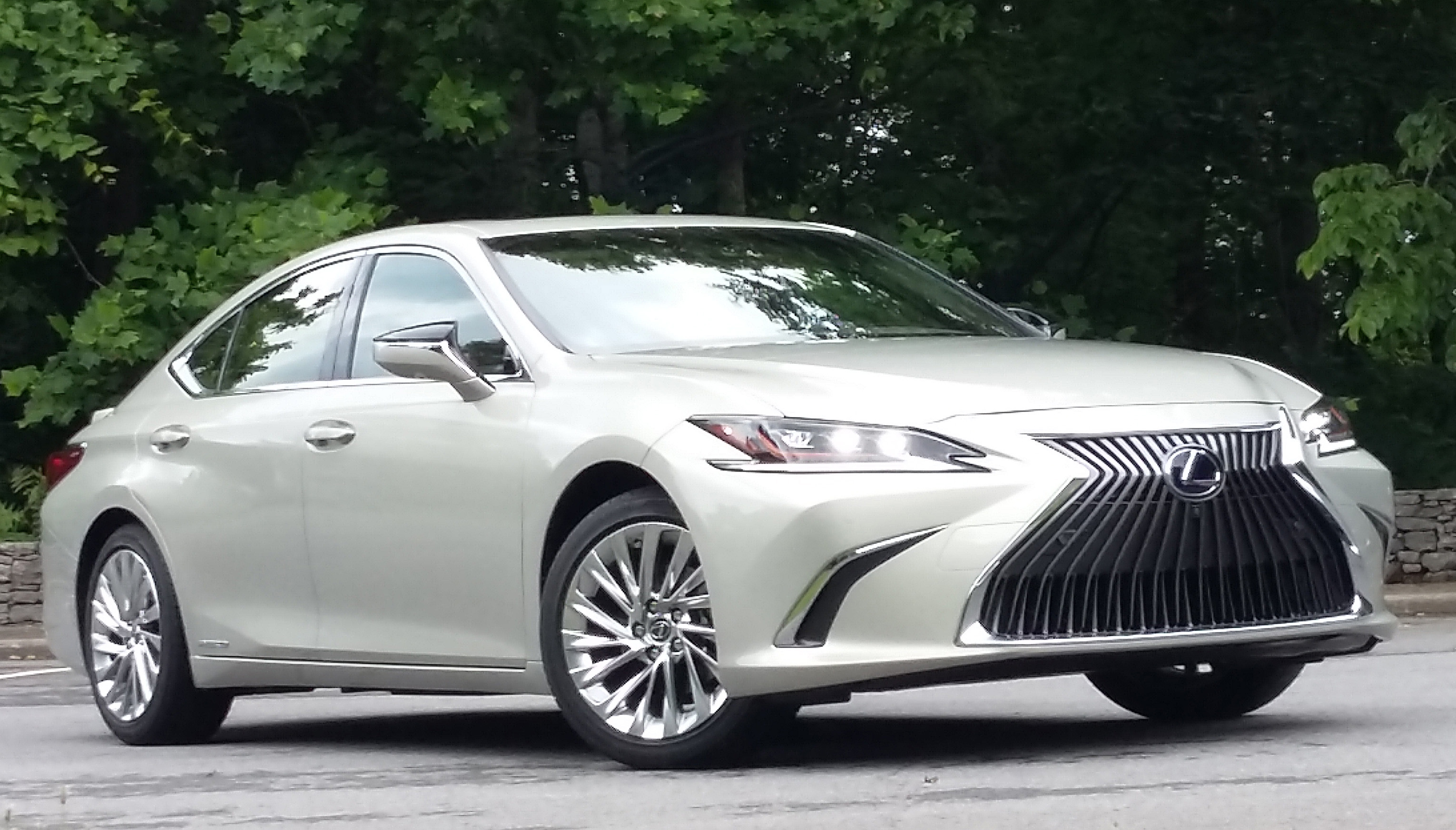 Since its U.S. debut for 1990, the Lexus ES has been positioned at the luxury end of the premium-midsize segment. Today its front-drive layout is in the class minority, and it’s the only member that isn’t offered in all-wheel-drive form.

But it’s also one of the few that still comes standard with a V6 engine. Most rivals now start out with a 4-cylinder – though typically with turbocharging – with sixes offered only at (usually substantial) extra cost. Granted, a 4-cylinder is found in the ES’s hybrid version – called the ES 300h – but it’s mated with an electric motor to provide decent acceleration with outstanding fuel economy.

As we’ve already touched on powertrains, let’s get to that first. Standard in the ES 350 is a 3.5-liter V6 that adds 31 horsepower for 2019, now corralling 302, along with 267 lb ft of torque, up by 19. It also trades a 6-speed automatic for an 8-speed, the latter offering both a lower first-gear ratio for brisker take-offs, and a higher top ratio for better highway fuel economy. And indeed, those numbers have improved for 2019, with Lexus claiming a half-second drop in the 0-60 time to 6.1 seconds, and a roughly eight-percent improvement in EPA figures, now expected (but not yet officially confirmed) to rest at 22 city/33 highway/26 combined. 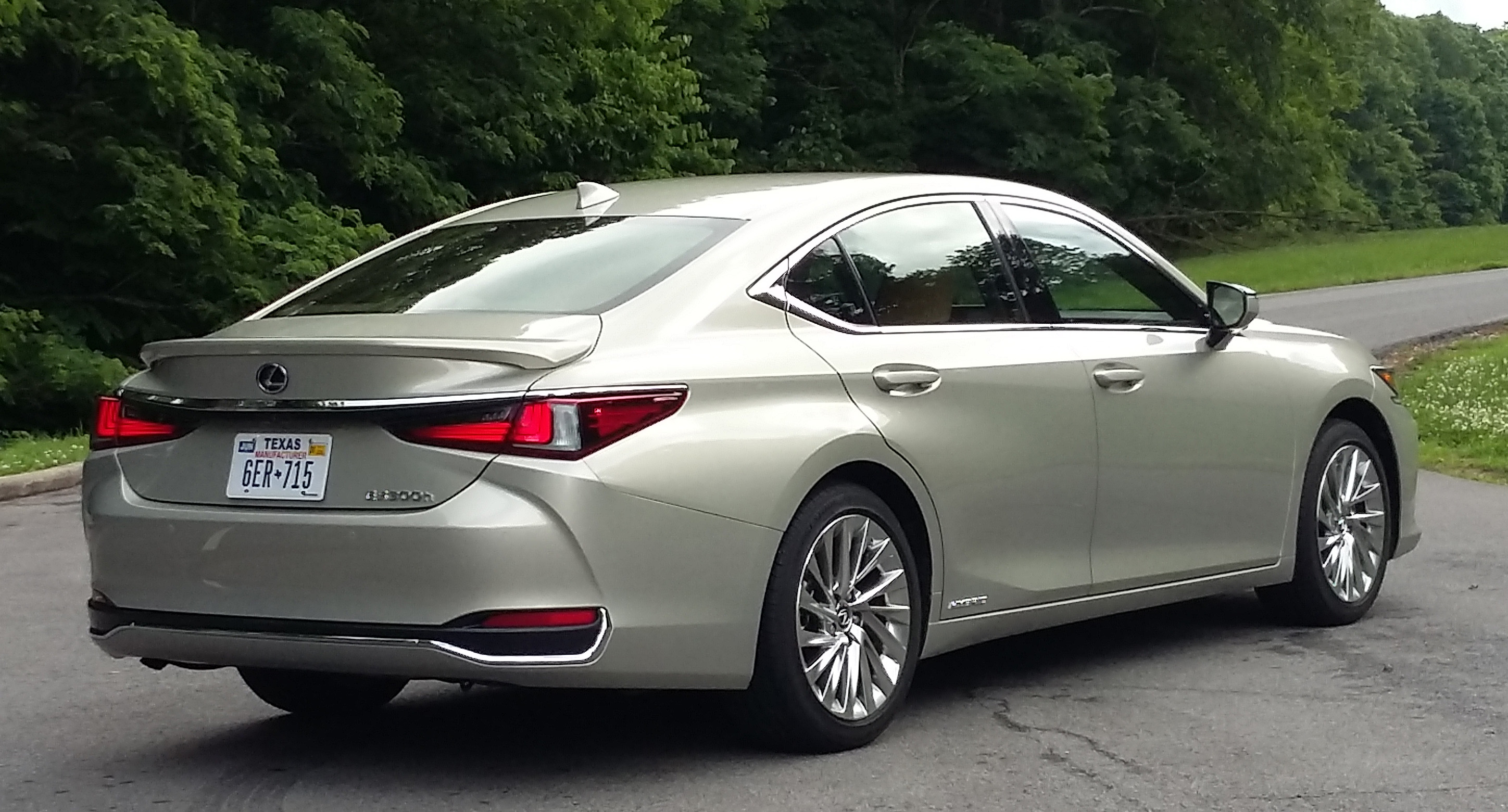 Both the ES 300h hybrid (shown) and performance-oriented F Sport come with a rear spoiler the “regular” ES 350 lacks.

Speaking of fuel economy, figures for the ES 300h are also expected to rise, Lexus estimating a combined (city/highway) EPA rating of 44 mpg. If that’s the case, Lexus says it would leave the ES 300h topping the premium-midsize segment in fuel efficiency. 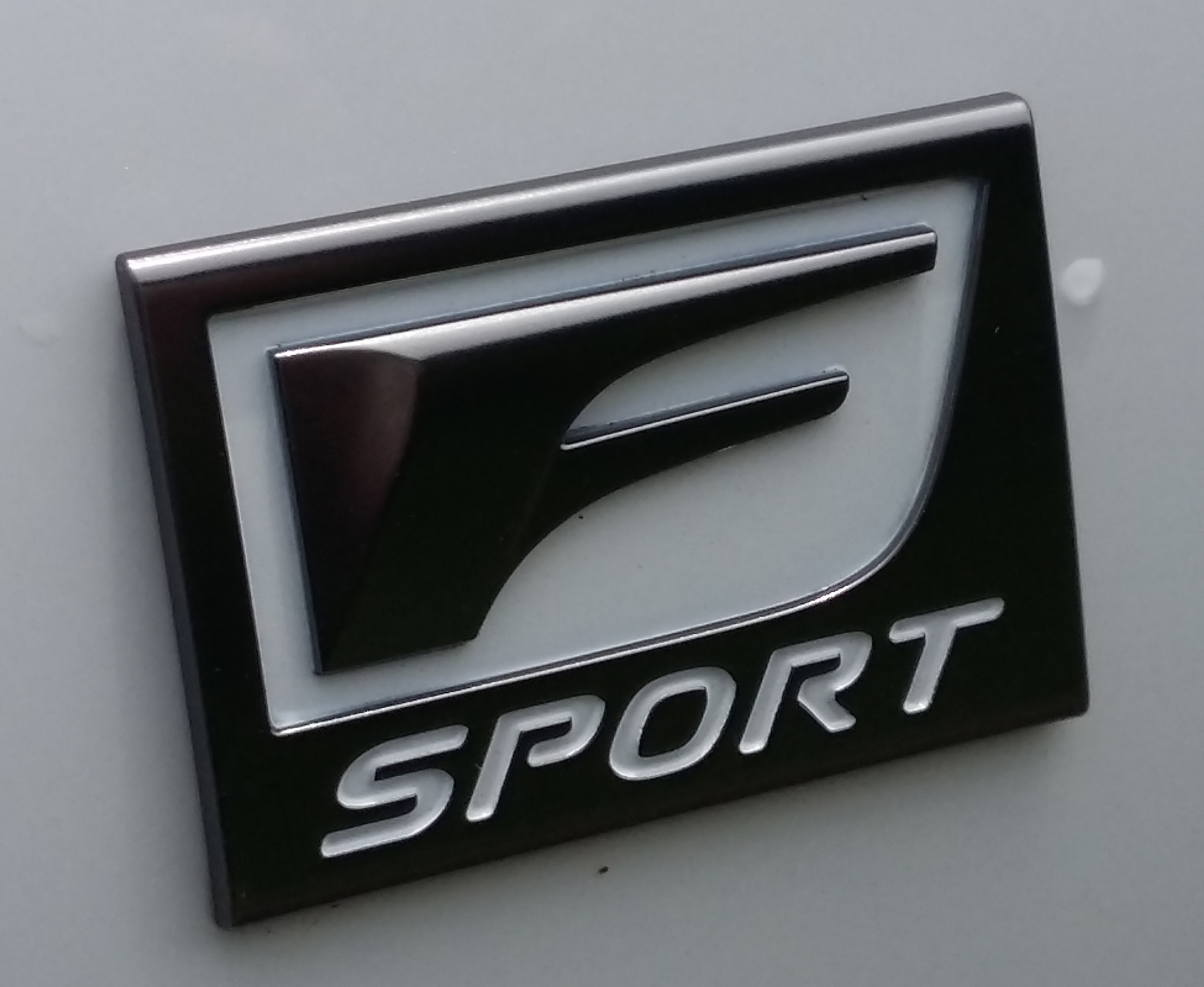 The 2019 ES lineup hosts its first F Sport model, a performance-oriented offering that’s expected to account for about one-quarter of ES sales.

Added to the opposite end of the ES spectrum for 2019 is the new F Sport version, wearing a moniker carried over from sporty versions of other Lexus models. In this case, it’s marked by a black crosshatch grille, two distinctive exterior hues, and a uniquely available black-and-red interior color combo. While it carries the same powertrain as the ES 350, the F Sport adds available variable suspension and “variable” exhaust, the latter of which provides a much throatier exhaust note on demand. It marks the first time the ES has ventured from its traditional luxury focus, and Lexus expects the new model to account for a whopping 25 percent of sales. 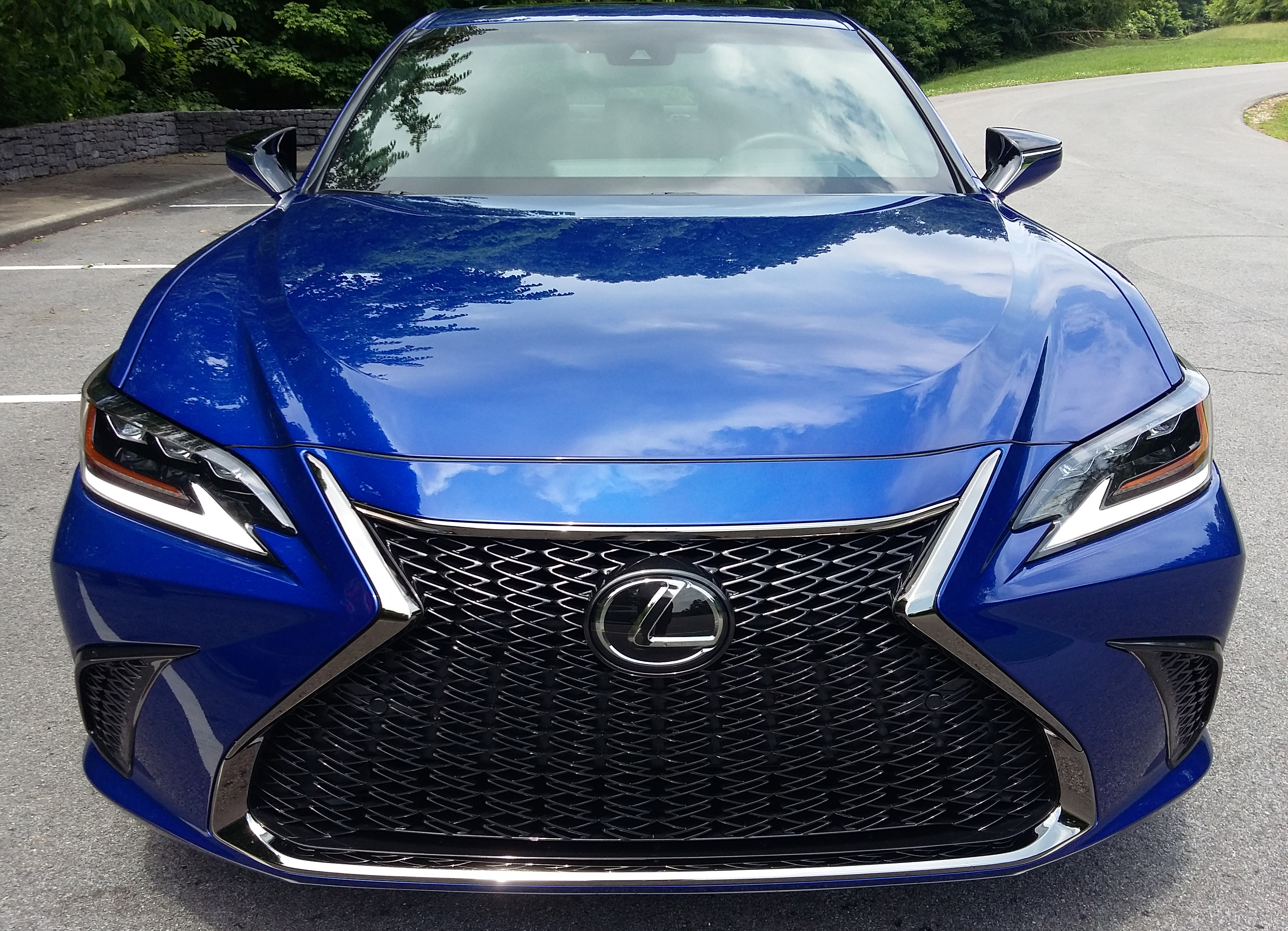 F Sport versions get a unique crosshatch grille (actually a bunch of “L”s laced together) to replace the “waterfall” grille found in other models.

Size-wise, the ES is a bit larger than before, growing 2.6 inches in length on a two-inch-longer wheelbase. It’s also fractionally lower and wider. Notably, the hybrid’s battery has been relocated from the back wall of the trunk to beneath the rear seat, giving it the same 16.7-cu. ft. trunk as the gas versions. However, the rear seat backs don’t fold down to expand the cargo area in any version, which is kind of a disappointment.

Each model in the lineup – ES 350, ES 300h, and ES F Sport – is offered in multiple trim levels that include base, Premium, Luxury, and Ultra Luxury. Prices had not yet been released at the time of this write-up, but – as a guide – the former model started at just under $40,000 including destination, and Lexus implied that the new one would likely hold close to that figure.

As is expected nowadays, the new car offers several new features. Chief among those is standard Apple CarPlay (available starting October 1 – just after the car’s launch in September – making it the first Lexus to have it) along with Wi-Fi and Alexa 2-way communication capability (car-to-house/house-to-car). The latter works only with Android phones initially, expecting to add iPhone compatibility in December. Also new is available automatic rear braking, which will sound a warning if an obstacle is detected when backing, and then activate the brakes if the driver doesn’t.

Included with the available navigation system is a huge 12.3-inch dashtop screen. All models tested came with a center-console touchpad (right of shifter) used to navigate around the non-touch screen.

Aside from having a new design, the interior also hosts a new infotainment-control layout. Whereas the previous ES used a console-mounted “puck” to navigate through the non-touch dashboard screen, the new one uses a console touchpad. We’ve never been fans of either system – most of our staff preferring a touchscreen (ideally augmented with some physical buttons) – but this one seemed more predictably responsive and easier to use than some others we’ve tried. So still sort of a demerit, but not as much of one. Worth noting is the available Qi wireless charging, that the available navigation system comes with a large 12.3-inch dash screen that provides a wide canvas for the available “rotating” 360-degree camera that can be activated with the push of a dashboard button, and that the available head-up display throws a large, 10.2-inch projection onto the lower windshield. Also noteworthy is that both the base and up-level Mark Levinson sound systems include a CD player, an increasingly rare feature. Climate controls consist of flipper temperature-adjustment levers and repetitive-step pushbuttons for fan speed and mode – again, not our favorite setup, but at least they’re all mounted high, within easy reach.

Visibility – a traditional Lexus strength – holds true to form, with relatively thin pillars all around blocking little of the view to any angle. Front headroom and legroom are good rather than great, with both the driver and front passenger’s seat being available with power lumbar adjustment. There’s also a power tilt/telescopic steering wheel, which allows its positioning to be included in the seat/mirror memory settings, a nice touch. In back, those up to about 6’ should fit, even if the seat ahead is pushed far back, though a center-seater will have to contend with a fairly intrusive center hump. Passengers get their own 12-volt and two USB plugs.

Interior storage is adequate, but no more. A small glovebox is countered with a large console box containing a 12-volt outlet, and the console contains two cupholders and a cell-phone slot next to Aux and two USB plugs. Both a left-side flip-down dash bin and the door map pockets are small, but handy. 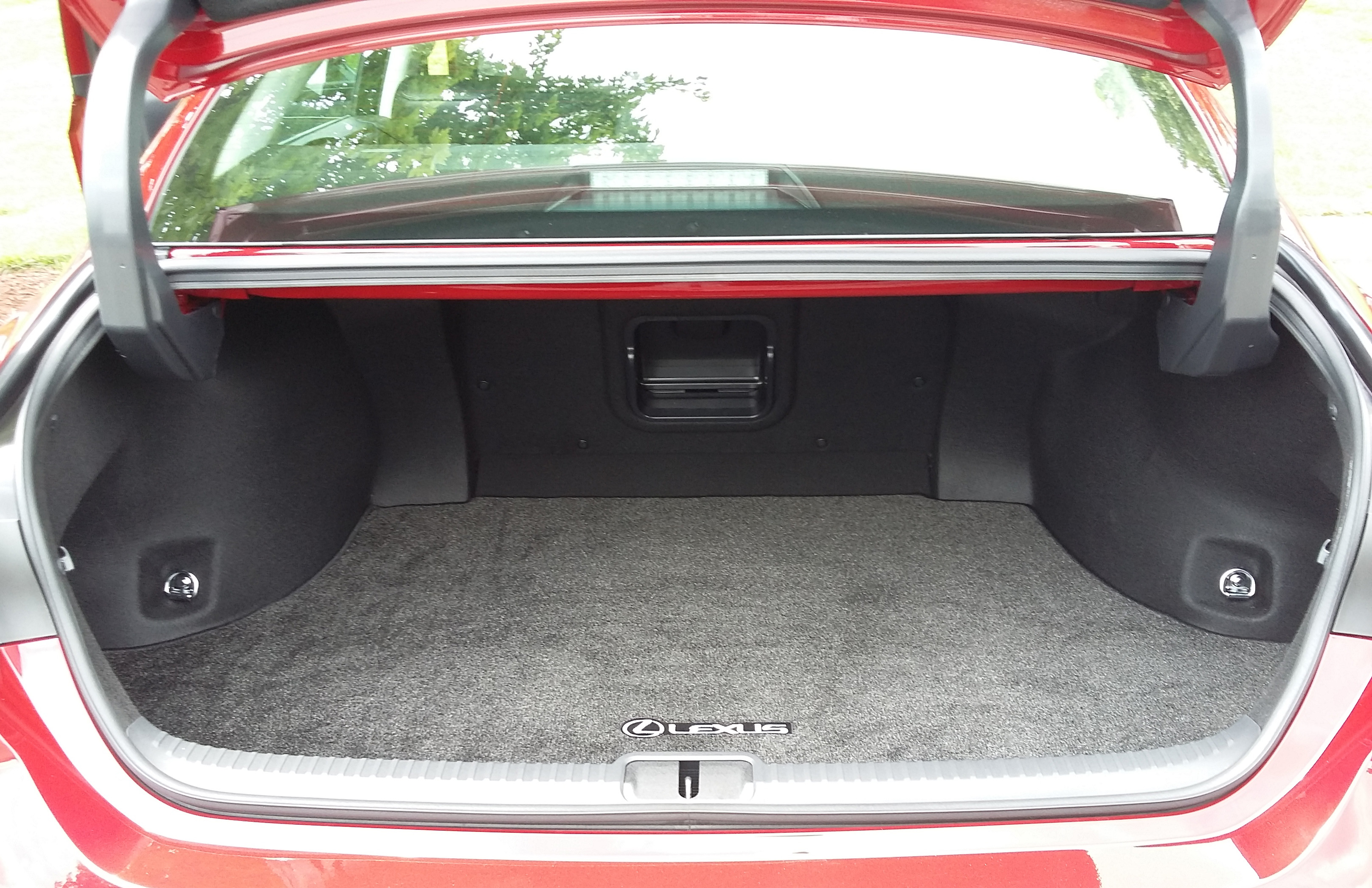 It’s roomy enough, but the ES’s trunk suffers a bit from lid hinges that dip down into the cargo area, and the rear seat backs don’t fold down to expand the space. New for 2019 is that the hybrid offers the same trunk space as the other models, as the battery — which used to reside against the back wall — has been moved to underneath the rear seat.

As mentioned, the trunk can’t be expanded because the rear seat backs don’t fold. However, the trunk is fairly large, though sickle-shaped hinges dip into the area and there’s only a small amount of “hidden” storage under the floor. Available for 2019 is a power trunklid that can be opened or closed by swiping your foot under the rear bumper.

Although the roads around Nashville (the location of our preview press-drive event) didn’t offer near the test of ride quality as those around our home office of Chicago, the ES seemed to fare well over bumps, with fine handling for a luxury-focused vehicle. Seemingly better in both regards was the automatically adjustable suspension offered in the F Sport, as its various settings (including Normal, Sport, and Sport +) allow the driver to choose between ride comfort and handling prowess.

One strong selling point of the ES 350 and F Sport is their strong V6 engine. While some rivals offer engines with far more horsepower, they’re typically on high-end (read, “expensive”) sport versions that often end up sacrificing luxury in the bargain. With plenty of punch off the line and good passing response – thanks in part to the relatively quick kickdowns of the 8-speed transmission – it’s doubtful most buyers would find power wanting. Even the hybrid isn’t bad in these regards; though it’s a bit lazy off the line, there’s very good throttle response from speed, and Lexus says it can do the 0-60 dash in a decent (though hardly stimulating) 8.1 seconds … or just 1.5 seconds slower than the V6 versions.

All told, the 2019 ES stands as an improvement over the already-good 2018 version, which earned (as had many of its predecessors) a Consumer Guide® Best Buy award in the premium-midsize segment. Some may not care much for the control layout, the lack of folding rear seat backs may turn a few off, and those who live by Android Auto are out of luck (as only Apple CarPlay is offered). But otherwise, the ES carries on as the class luxury leader while expanding its appeal to those who desire a somewhat more engaging driving experience. And that means even more folks than ever should put the ES on their car-buying radar.

With the wide range of models now on offer — along with a host of new features — the redesigned 2019 Lexus ES should appeal to an even wider range of buyers.