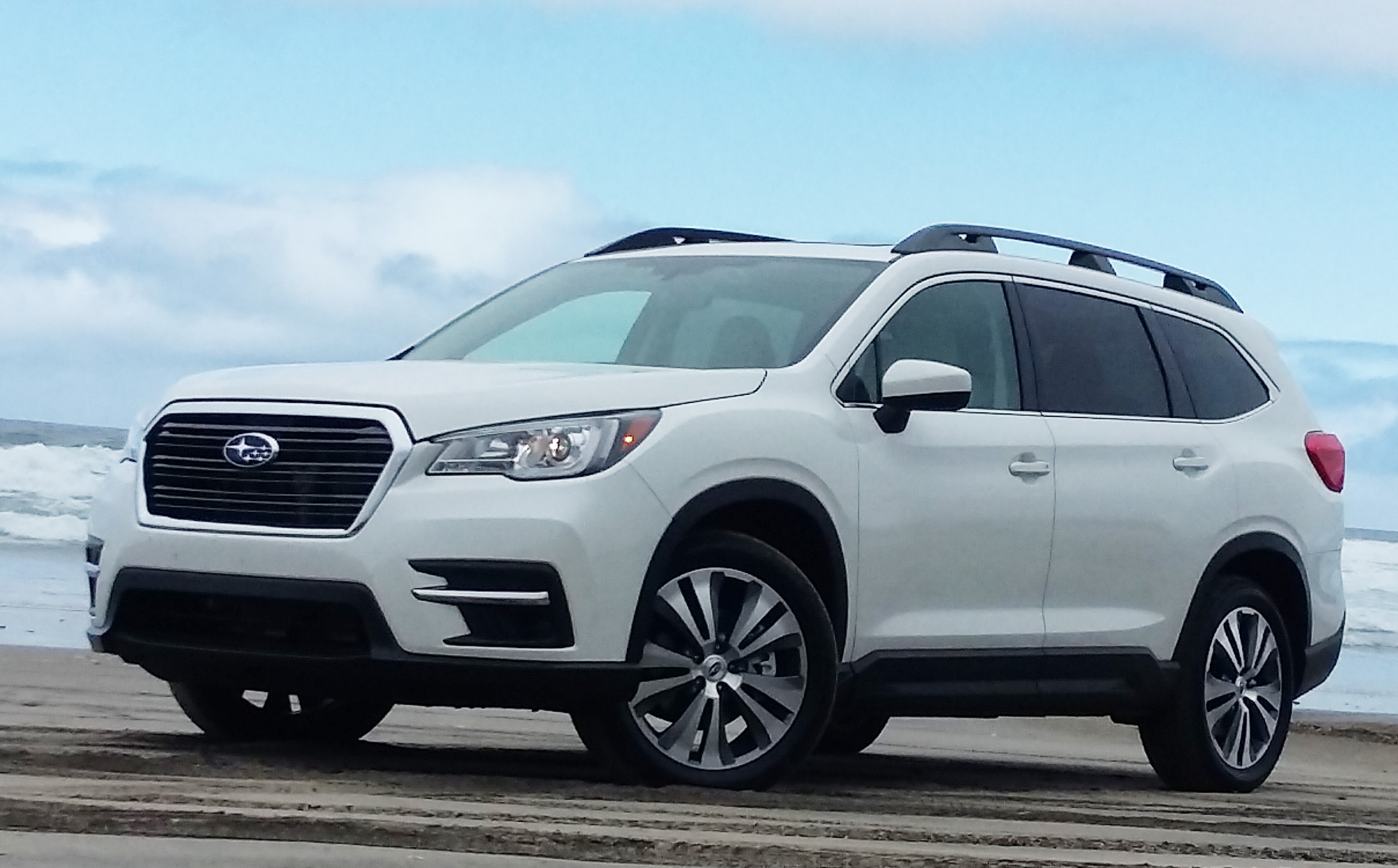 Although small crossovers have been getting all the hype of late, the midsize segment has also seen its share of movement. Certainly notable in this regard is Subaru’s new Ascent, due to arrive in showrooms this summer.

While new, this isn’t the company’s first midsize crossover. You can be forgiven if you don’t remember the B9 Tribeca (later, simply “Tribeca”) introduced for 2006. For whatever reason (some might say styling being the biggest), that effort saw limited sales and was dropped after a lackluster nine years on the market. But it is unlikely the Ascent will suffer the same fate.

What Ascent brings to the midsize party are some unusual features and a strong value equation. Size-wise, it’s about par for the three-row midsize-SUV segment, but it offers seating for up to eight passengers and comes standard with all-wheel drive. It also features a unique powertrain that gives it a decent balance between power and fuel economy.

Under the Ascent’s hood is a new 2.4-liter turbocharged “flat” four rated at 260 horsepower and 277 lb-ft of torque mated to a CVT automatic transmission. Though EPA ratings are 21 city/27 highway/23 combined (20/26/22 for up-level models), the Ascent still has a class-competitive 5000-lb maximum towing capacity. 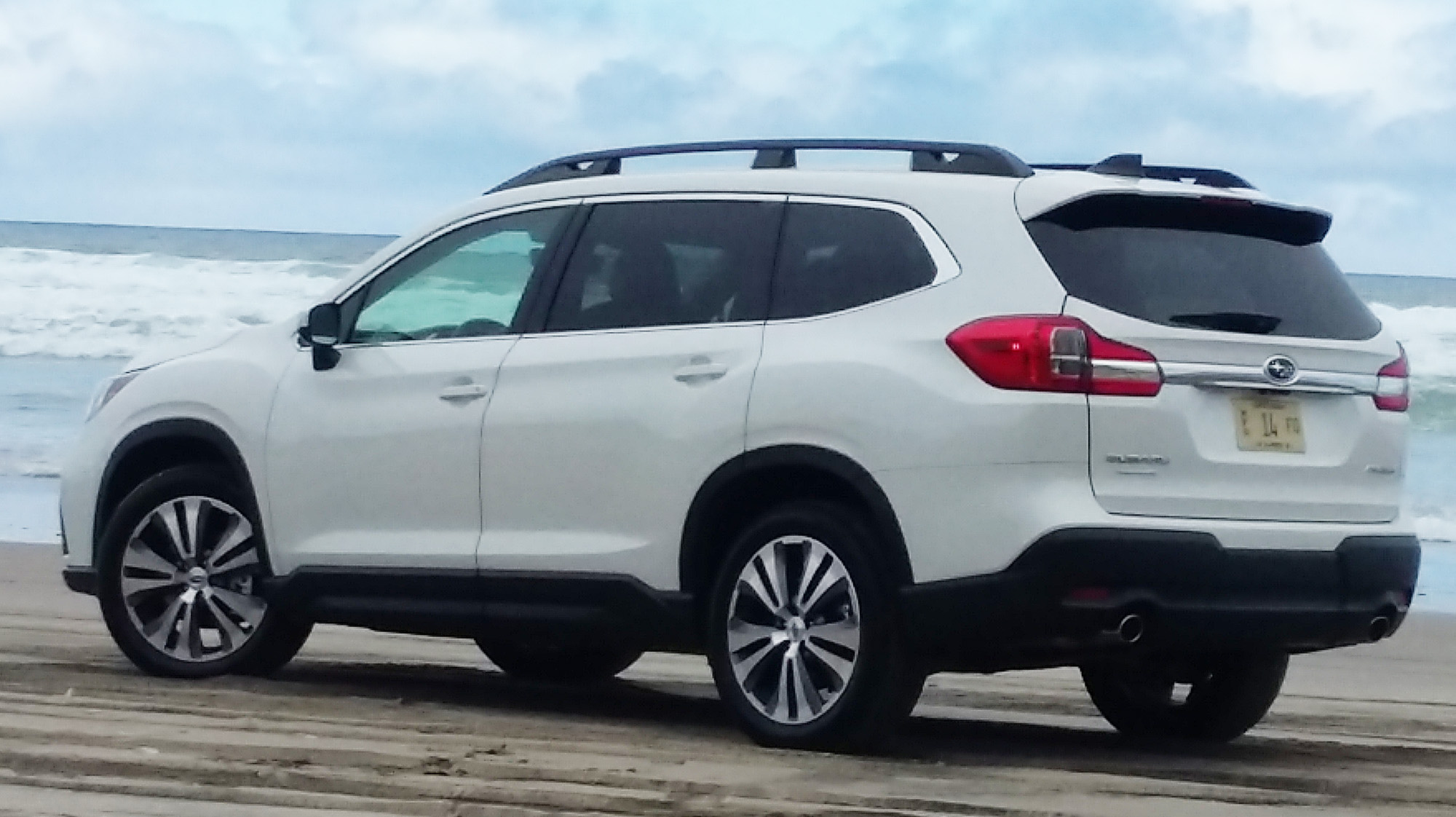 The midsize Ascent offers a choice of 7- or 8-passenger seating, comes standard with all-wheel drive, is available with a number of interesting features, and will start at just under $33,000 when it goes on sale this summer.

Four trim levels are offered, starting with the $32,970 (including $975 destination) base model. Standard are all the expected items plus Subaru’s EyeSight suite of high-tech safety features (forward collision warning and mitigation, lane-departure warning, adaptive cruise control, and new Lead Vehicle Alert — more on this in a bit), Apple CarPlay/Android Auto functionality, STARLINK infotainment system with 6.5-inch touchscreen/CD player/satellite radio, 3-zone automatic climate control, cabin-view mirror (so the driver can easily see those in the back rows), roof rails, 18-inch alloy wheels, and an auto-hold function, which activates with the simple press of a console button and allows drivers to remove their foot from the brake pedal during long stops, with the brakes releasing automatically when the gas pedal is pressed. The new Lead Vehicle Alert sounds a warning tone when your car is stopped at a light and the car ahead begins to move — so that you aren’t left sitting there if your attention has been diverted — something we probably all wish all vehicles had. 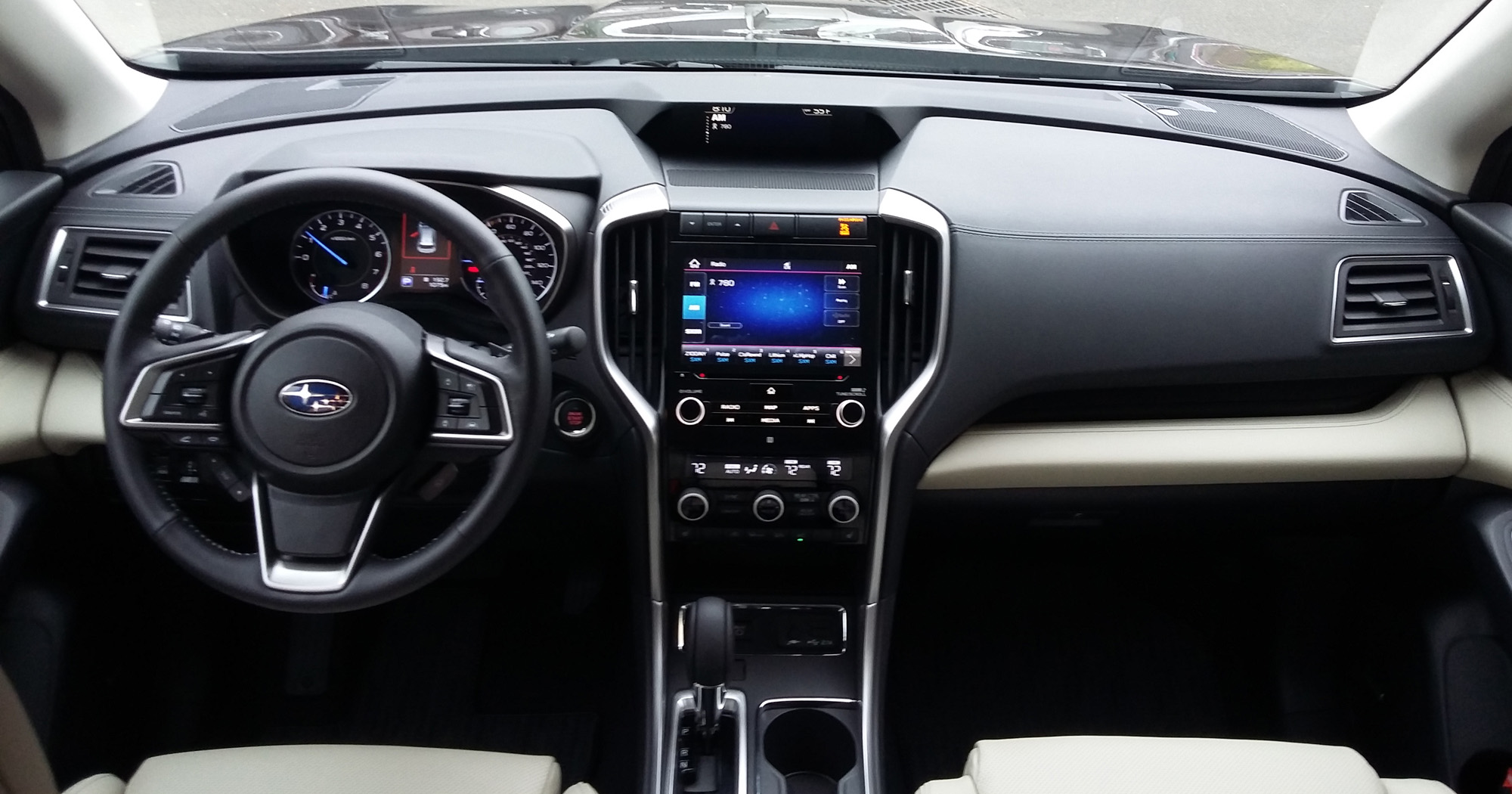 Two-tone interiors are available (the top-line Touring exclusively offering one in Java Brown with woodgrain trim), and the dashboard hosts easy-to-use infotainment and climate controls. Subaru says that up to 19 cupholders are available, evenly spread between the three rows. 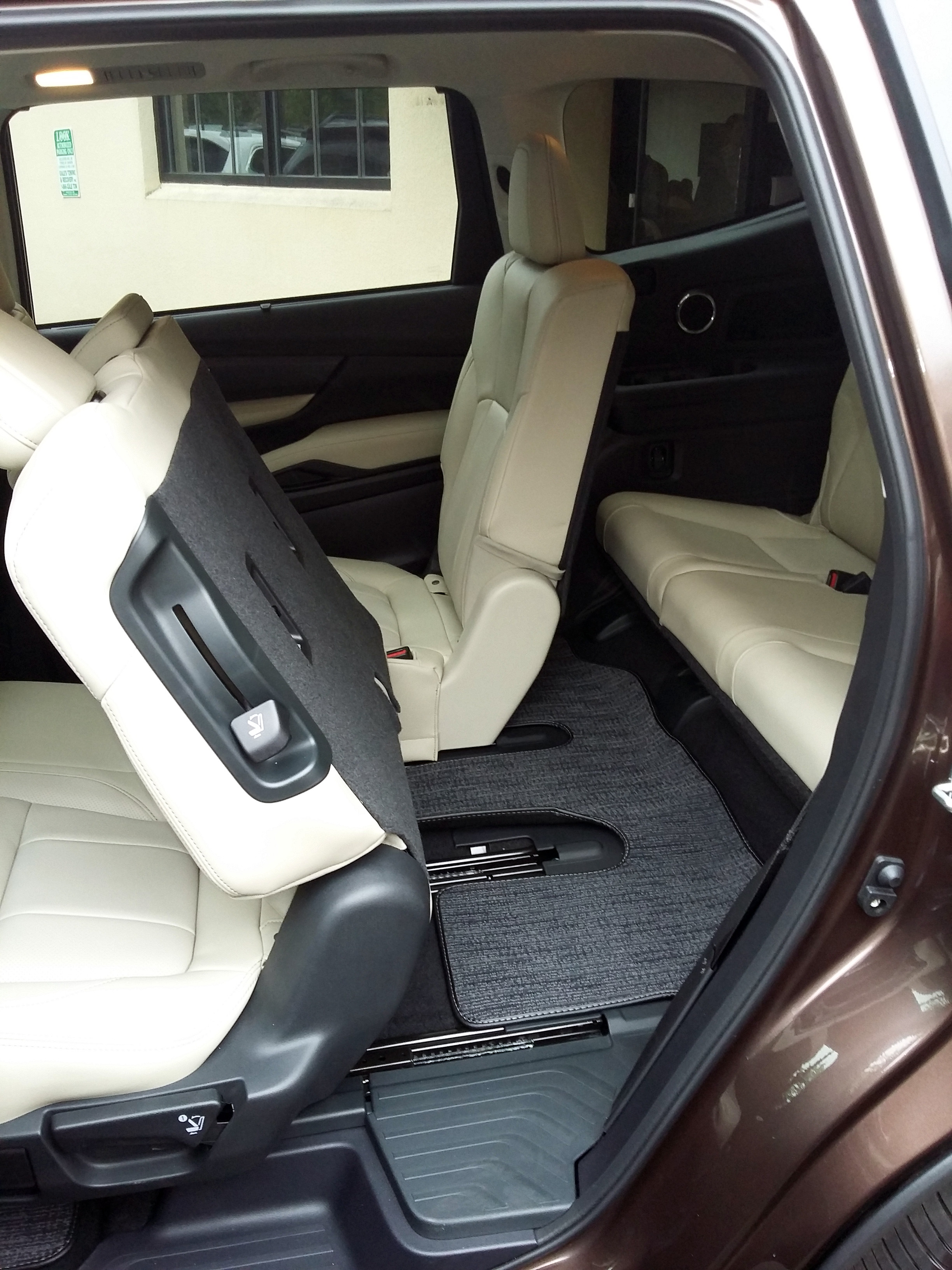 The second-row seat slides forward to reveal a sizable portal to the third row, which is roomy enough to accommodate average-size adults.

The top-line $45,670 Touring adds some really top-line features, including Java Brown leather upholstery, wood-grained trim, ventilated front seats, heated steering wheel, navigation system, the Harman Kardon sound system, up to eight USB ports, panoramic sunroof, rain-sensing wipers, 120-volt outlet, and a front camera. Also on board is a second rearview camera mounted at the top of the tailgate (and inside, so the wiper and defroster keep the view cleared) that displays its image in the rearview mirror; its purpose is to show what’s behind the vehicle even if cargo or back-row passengers block your rear sightline, and it’s activated simply by flipping a lever under the mirror.

Getting in or out of the Ascent is eased – both front and rear – with a fairly low step-in height and wide-opening doors. There’s plenty of headroom and legroom up front, and notably, the power driver seat goes up really high, a boon for shorter folks. Visibility is only fair to the front and rear corners but good to the sides. At least on the Premium model driven, the rearview camera “sees” in a 180-degree arc, making it easier (and safer) to back out of parking spaces. We found the audio and climate systems to be quite straightforward and easy to use. 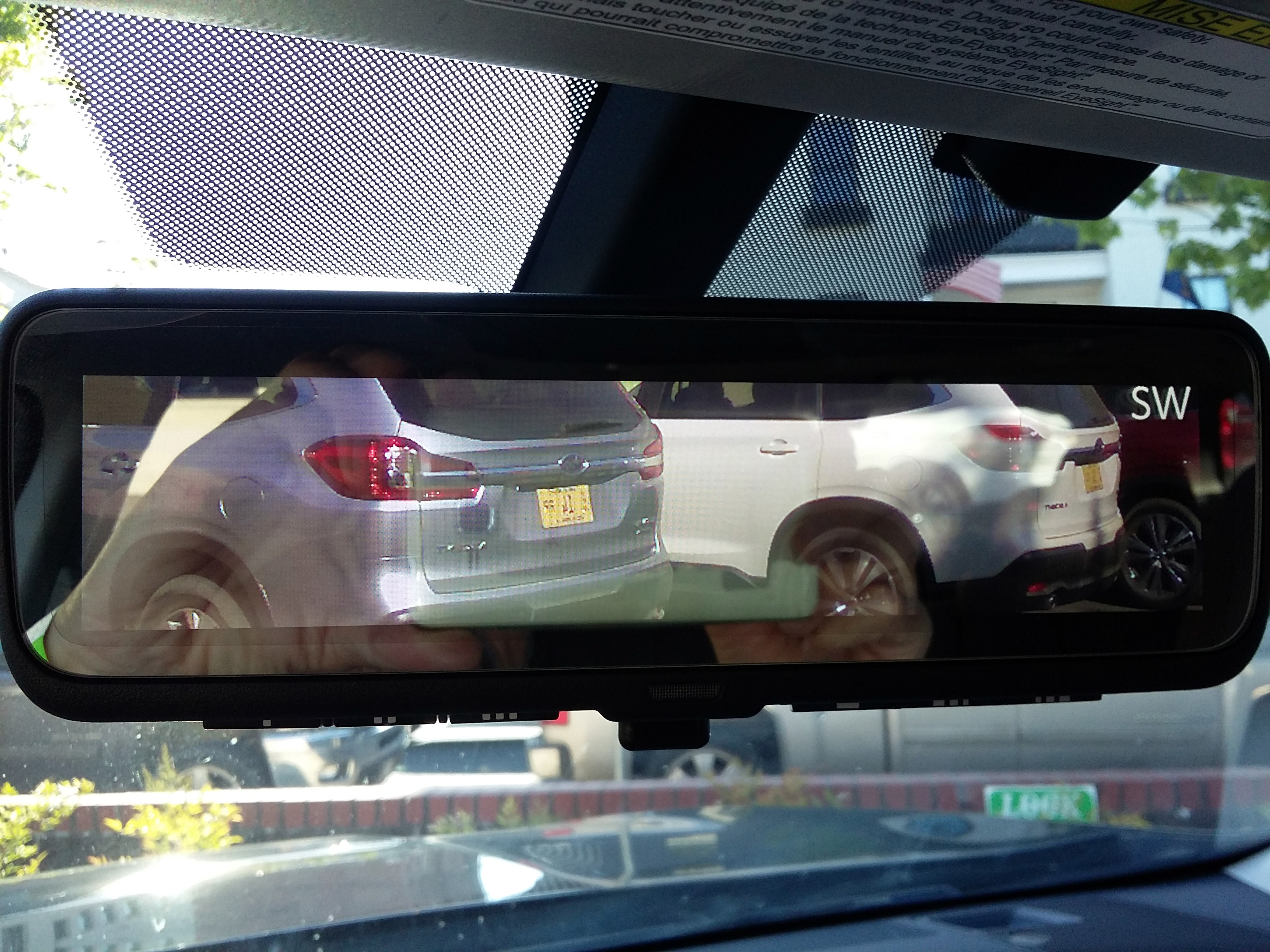 Two really cool cameras come on the top-line Touring. A secondary rearview camera (above) displays its image in the rearview mirror — useful if passengers or cargo block the “regular” one — and is activated by flipping a lever at the base of the mirror. There’s also a front-view camera that can be turned on with a dashboard switch. Too bad they’re not available on a wider range of models.

We also crawled around in a top-line Touring with its front-view camera (which likewise provides a 180-degree view, great when pulling into a garage or to see down the sidewalk at the end of an alley) along with the second rearview camera mounted in the tailgate (a great idea if you carry people and cargo … and why would you have a crossover if you don’t?). The only bad thing here is that this combination isn’t offered in lower-line models.

As in front, there’s plenty of headroom and sufficient legroom in the second row to allow an average-size adult to sit behind a fully rearward front seat, and the floor is nearly flat, giving a center passenger decent foot space. The seat itself moves fore and aft about five inches to balance legroom with the third row, which is fairly easy to access thanks to a tall, wide door portal and easy-to-slide second-row seat, and my 5’9 frame fit back there (albeit sitting knees-up) with little trouble. The second row of the Premium carries its own climate controls and air vents, and the third row has its own vents. The Touring adds handy second-row handgrips that ease exit for third-row passengers. Subaru points out that the Ascent offers up to 19 cupholders, and though some models don’t have that many, you’ll likely never run out.

Cabin cargo space consists of a small glovebox, shallow dash trays over the glovebox and to the left of the steering wheel, a large 2-tier console box, two cupholders, a forward console bin with 12-volt power outlet over Aux and two USB plugs, and small map pockets in the doors with two cupholders each.

In back, the cargo area is quite tall and very spacious; Subaru claims cargo room is near the top of the class. The second- and third row seat backs fold nearly level with the cargo floor, the slight “step” to the third row being covered with a cloth ramp. There’s also a wide storage bin under the cargo floor, and the available cargo cover – which telescopes a bit – can be “compressed” to fit into the bin … a great convenience. 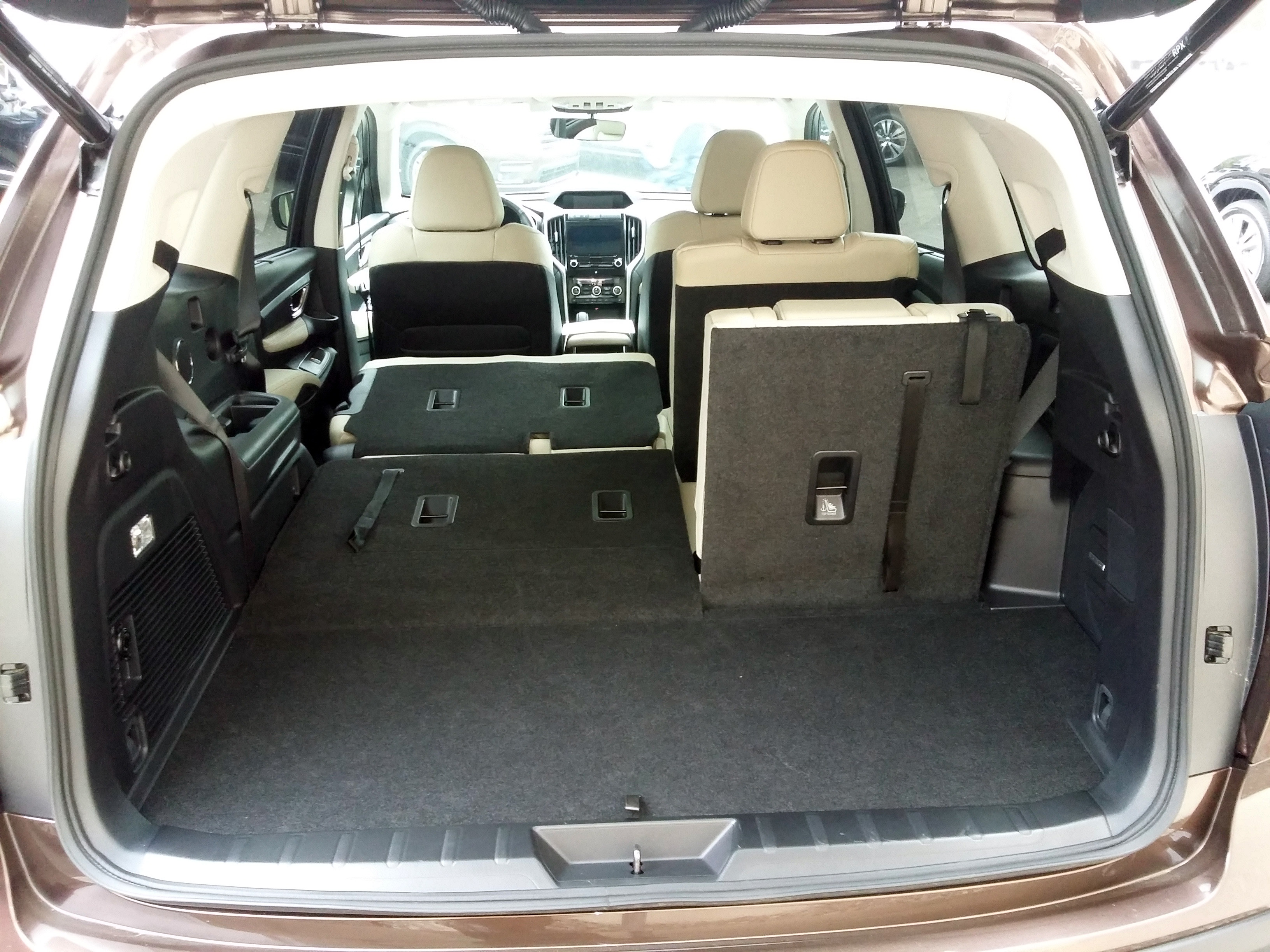 Both the second- and third-row seats fold nearly flat to increase the size of the already-large cargo area. A neat touch is that the wide underfloor bin at the rear can hold the collapsible cargo cover.

While ride (which seemed quite smooth) and handling (almost “sporting”) struck us as very impressive, the powertrain was a bit less so. The turbocharged engine produces a good amount of power, but it takes a moment to build in a full-throttle launch, and progress from there isn’t always completely linear; in normal driving, however, it feels fine, though a faint throbbing sound can almost always be heard. The CVT automatic also works fine in normal driving, and provides fairly quick kickdowns when the throttle is stabbed from speed.

What it comes down to is that the Ascent is a family focused vehicle that’s loaded with practical features, many being rare or unique in the class. It’s also roomy and dynamically capable, and we appreciate that it comes standard with all-wheel drive and some important high-tech safety equipment. If there’s a down side, it’s that some of the really trick stuff is only offered on the $45K Touring, but even lower-line models have a lot to offer. It all adds up to a strong new entry for Subaru in the midsize-crossover segment, and this one isn’t likely to go unnoticed.

Aimed at families that have outgrown their smaller Subarus, the Ascent makes its mark with available 8-passenger seating, fine cargo space, up to 5000-lb towing capacity, and a host of new features.