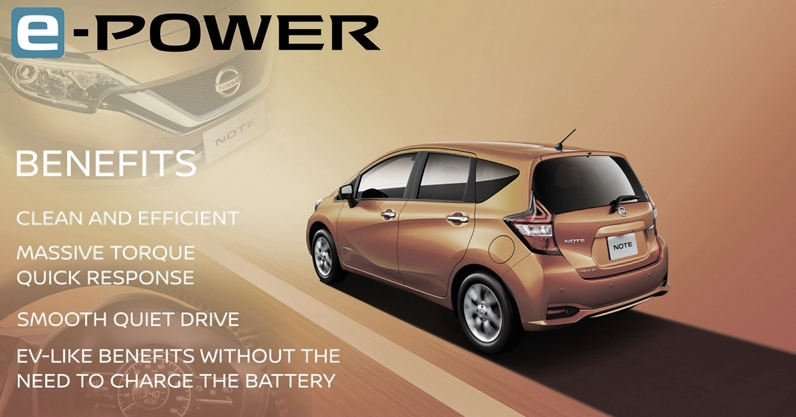 Though the overall numbers are still relatively small, consumers around the globe are buying more electric vehicles than ever before. That said, those motorists embracing electrification—at least in the U.S.–seem to still be of an early adopter mentality. Most mainstream shoppers remain skeptical that the switch to pure-electric driving will be worth the perceived hassles.

Plug-in hybrid vehicles may go some distance in helping to mainstream the EV driving experience. These vehicles operate as electric vehicles for a limited distance, typically 15-25 miles, and then operate as gasoline-powered hybrids once the battery is depleted. A number of luxury makers currently retail plug-in hybrids in the U.S., as do Chrysler, Ford, Honda, Mini, Mitsubishi, and Toyota.

Looking to balance the perceived benefits of electrification with the convenience and conventional operation of a gasoline-fuel vehicle, Nissan has developed an alternative powertrain option it calls e-Power.

Nissan’s e-Power system is available in the 2018 Japanese-market Note and Serena.

First seen in the Nissan Note (similar to the U.S.-market Nissan Versa Note) e-Power operates much like an electric vehicle drietrain, but requires no charging, only gasoline.

The benefits of the e-Power drivetrain include improvements in fuel economy, power delivery, and quietness. 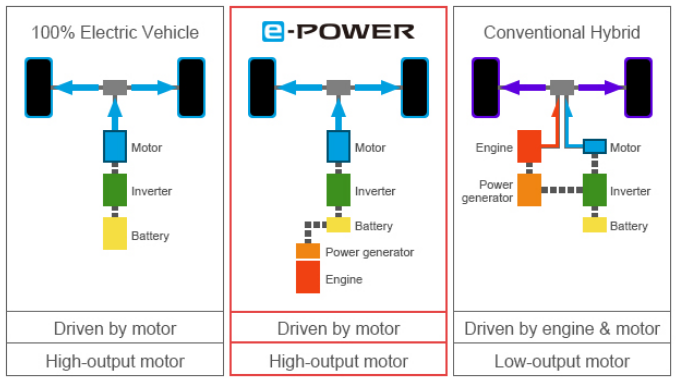 The e-Power system operates more like an EV powertrain than it does a conventional hybrid.

How does e-Power work?

Unlike conventional hybrids, which use electric motors to supplement the power produced by a gasoline engine, the e-Power drivetrain employs the gas engine only to generate electricity.

That electricity, in turn, powers an electric motor, which is solely responsible for powering the vehicle. This system is similar to that found in the Chevrolet Volt, though the Volt can be plugged in for pure-electric operation.

What are the advantages of e-Power?

Because the gasoline engine does not power the car directly, it can operate in its most efficient rpm range. The e-Power system in the Nissan Note employs Nissan’s HR12DE 1.2-liter 3-cylinder engine, which operates at a constant 2500 rpm. Because the engine is working in its “sweet spot,” it is producing more energy with less fuel than if it were powering the vehicle directly.

The generator the engine turns supplies an electric motor the power to move the car. The advantages of this system:

In the Note, the e-Power system improves fuel economy roughly 30 percent, while also reducing the car’s 0-60 mph time from around 14 seconds to around 10.

In its first full year of availability, models with the e-Power drivetrain accounted for 65 percent of Note sales, this despite the approximately $1500 retail cost of the option. 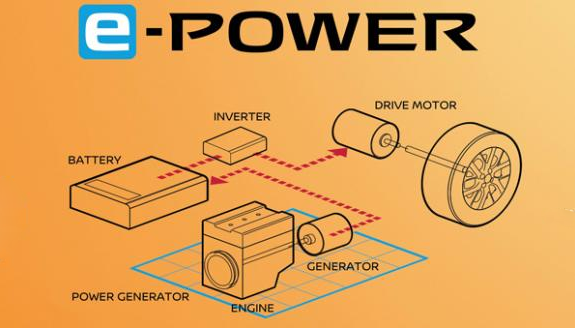 The e-Power system’s gasoline engine powers the vehicle indirectly, via a generator. Energy from the generator powers an electric motor, which moves the car. A small battery is used to store supplemental power, which may be used during periods of brisk driving.

When will Nissan bring e-Power to the U.S.?

Nissan has expanded e-Power availability in Japan to include the Serena compact van. The company plans to bring the e-Power drivetrain to the U.S., with models in the maker’s Infiniti luxury channel most likely to receive it first. Because the e-Power system can be scaled for use with larger engines and motors, it can be easily modified for luxury and high-performance applications.

Per Nissan, e-Power provides, “The benefits of an EV without having to worry about charging the battery.” This oversimplifies things somewhat, as, unlike an EV, you do still need to purchase gasoline.

Whether or not the e-Power brand becomes a useful marketing tool for Nissan may be irrelevant. As makers scramble to improve fuel economy, a hybrid system with sporty character and substantial efficiency advantages may simply replace conventional powertrains in certain models.