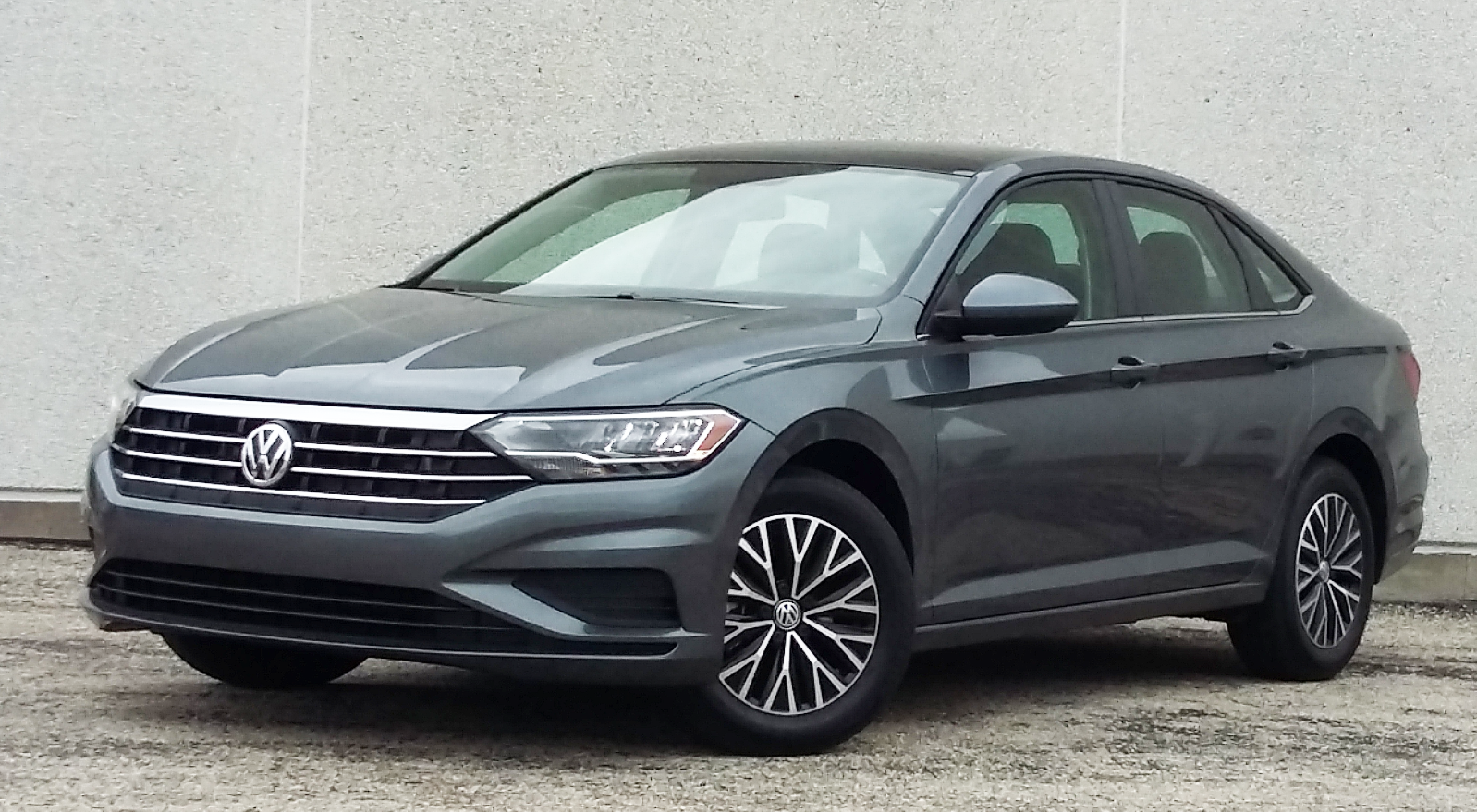 Although most of the “new” in new vehicles has been focused on crossovers of late, many manufacturers are still committed to cars. And Volkswagen proves it’s one of them with the introduction of the redesigned 2019 Jetta compact sedan, due on sale in the next couple of months.

Longer, taller, and wider than the outgoing model, the Jetta predictably adds interior space. It also offers more features than before – some being standard – while the starting price actually drops a bit.

However, engine choices – at least for now – have been trimmed to just last year’s base powerplant: a 1.4-liter turbo, now rated at 147 horsepower and 184 lb ft of torque. Gone are the previously available 1.8- and 2.0-liter turbos that offered 170 and 210 horsepower, respectively. But the previously standard 5-speed manual has been replaced by a 6-speed, and the former 6-speed automatic has been replaced by an 8-speed.

The well-equipped S starts at $19,395 including the $850 destination charge, and is the only model offered with the 6-speed manual; substituting the 8-speed automatic adds only $800 (bringing the tally to $20,195). Standard are the usual features, plus such things as 16-inch alloy wheels, LED headlights and taillights, 6.5-inch touchscreen, Apple CarPlay/Android Auto functionality, and VW’s Car-Net App-Connect feature. Optional for a bargain-priced $450 is the Driver-Assistance Package that brings forward-collision warning and mitigation along with blind-spot and rear-cross-traffic alert. Due later is an optional Winter Package. Available as accessories are such things as a trunk liner with movable “cargo blocks” that can be used to hold small items in place (we’ve tried this $138 accessory on other models and found it really handy), and an auto-dimming inside mirror with Homelink ($180).

Though larger in every dimension and fitted with more standard equipment, the 2019 Jetta actually costs less than the outgoing model, with prices starting at $19,395 with manual transmission, $20,195 with automatic.

The R-Line mostly adds some sporty touches for its $23,845 price, including fog lights and 17-inch alloy wheels.

Notably arriving on the $25,265 SEL are lane-departure warning and mitigation, adaptive cruise control, and automatic high beams, along with auto-dimming rearview mirror, rain-sensing wipers, satellite radio, Car-Net Security and Service (which includes emergency services and such things as remote door lock/unlock and vehicle locator). Also included are a high-end BeatsAudio system, 8-inch touchscreen, 10-color interior ambient lighting (you get to choose the accent color), and a digital instrument-panel display that lets you choose what’s shown in front of you.

What we found during a brief test was that the new Jetta is, indeed, roomy inside. Typically for Volkswagen, there is a huge amount of front headroom and legroom on offer, and even with a front seat all the way back, an average-size adult can sit behind, with headroom sufficient for 6-footers.

Two areas in which the new Jetta shines: its sensible, easy-to-use control layout, and its vast interior space. In the photo at right, the driver seat was positioned for a 5’9 occupant; the passenger seat was pushed all the way back … and it goes really far back. Even in the latter case, same 5’9 occupant could fit behind the fully rearward front seat.

Also typical for Volkswagen, the control layout is first-rate. We drove an SE, and the audio system included volume and tuning knobs along with six physical buttons and large “virtual” on-screen buttons, all placed on a panel that’s high and tilted toward the driver, both aiding ease of use. Climate controls include rotary knobs for temperature and fan speed along with individual mode buttons that – quite unusually – allow you to choose defrost, dash vents, and floor vents all at the same time.

Visibility is good to the front and rear corners, less so to the sides. And although the interior on our SE had a rather subdued all-black color scheme, two-tones are available to brighten things up (grey on the base S, grey or beige on others), and there are lots of padded surfaces along with nice-looking “herring bone” grey trim.

Interior storage consists of a huge glovebox, good-size console box, a forward console bin under a USB plug and beside a 12-volt one, a small console tray, two cupholders, and map pockets with cupholders in the doors.

The trunk is wide at the rear, but sickle-shaped hinges dip into the load area and there’s no underfloor storage space. Par for the compact course, the folded rear seat backs rest about four inches above the level of the cargo floor, making it tough to slide long items forward. (This is one area where the Jetta’s larger Passat sibling rather shines, as its seat backs fold level with the cargo floor, rare in sedans – of any size.) 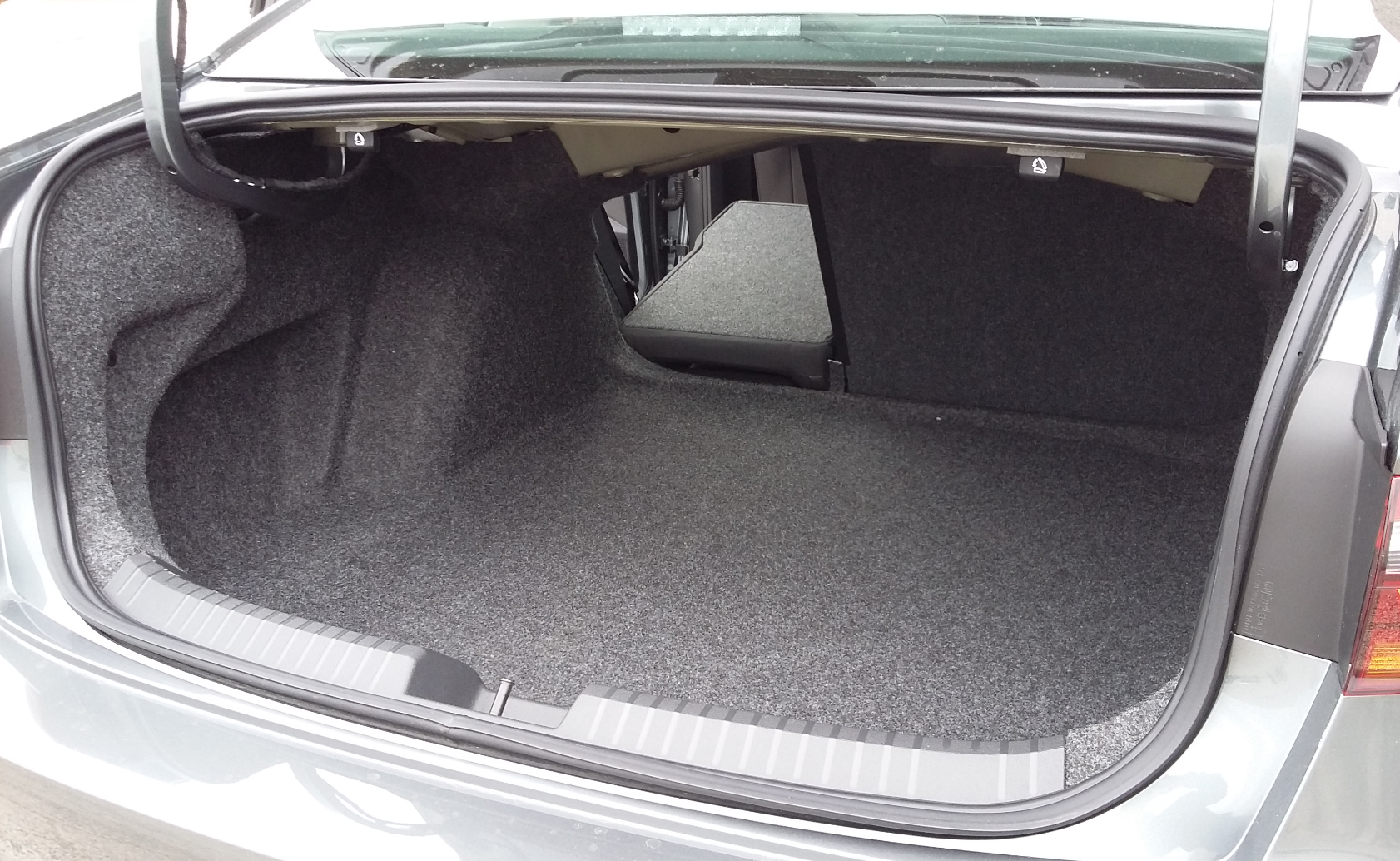 The trunk is quite roomy for a compact sedan, but the sickle-shaped lid hinges dip into the load area, and there’s no added space beneath the floor. As is typical of sedans — though hardly ideal — the folded rear seat backs rest a few inches above the level of the cargo floor.

Don’t let the Jetta’s “statistically” small 1.4-liter engine with its modest 147-horsepower output fool you; it really provides very adequate performance. After just a brief hint of turbo lag in a full-throttle start, the engine pulls quite strongly, and the automatic transmission kicks down quickly for good passing response. The combination carries an EPA rating of 30 mpg city/40 mpg highway – impressive for the class – and filling the tank after our test of about equal parts city and highway driving netted us 33.4 mpg, a very good showing.

If there’s any area in which the new Jetta doesn’t quite match the old, it’s in ride quality. That’s not to say it’s bad. But despite a longer wheelbase, the new car’s equally new platform doesn’t seem to exhibit the impressive (if not class-leading) combination of suppleness and solidity we’ve come to admire about Volkswagens in general and the Jetta in particular, as we noticed a bit of stiffness and impact noise over bumps that didn’t seem to be there before.

But while a little disappointing, that doesn’t really detract from the fact that the new Jetta comes off as a very roomy, capable, economical family sedan that offers a dose of German engineering at a very competitive price. Sure, we kind of miss the chassis refinement and larger engines that used to be offered, as the combination turned the Jetta into a budget-priced European sport sedan. And we also wish that some of the high-tech safety features (most notably, lane-departure warning and mitigation) were offered on trim levels below the SEL. But since even that model starts at just over $25,000 – with the loaded SEL Premium coming in under $28,000 – that’s really not a point that can be labored. In fact, that puts the Jetta in price contention with the most popular (and less roomy) compact contenders such as the Chevrolet Cruze, Ford Focus, Honda Civic, Nissan Sentra, and Toyota Corolla.

So mark this up as a move to the mainstream. That may disappoint some VW purists, but it ends up making the new Jetta a viable alternative to a far greater audience.

Jetta’s added dimensions give it vast interior space, and though it boasts a few more features than before, prices are lower — all in an effort to make it more attractive to a wider audience. But that all came at the expense of some of its former “sport sedan” credentials. Whether that strategy works to Volkswagen’s favor, only time will tell.