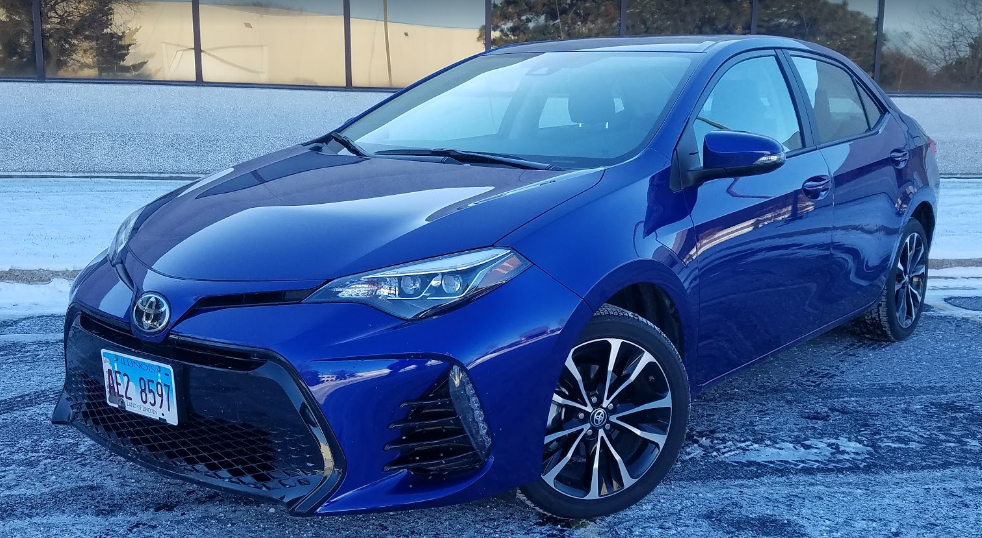 The not so good: Cargo versatility not the best, no Apple CarPlay/Android Auto

Although “old” for a car in the compact class, the Corolla — now in its fifth model year of this generation — continues to prove incredibly popular. 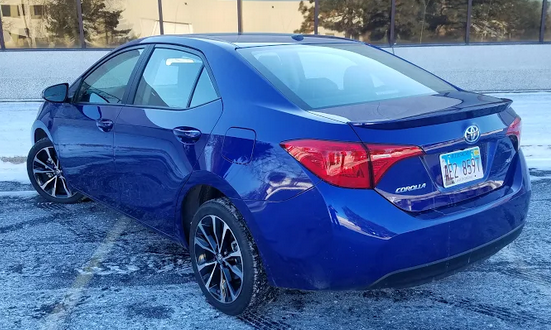 Black-accented 17-inch alloy wheels and a rear spoiler are sporty touches included in the SE, which itself is the sportiest of Corollas.

That may say more about the Corolla’s enviable reputation than it does about the design itself. There’s little that’s class-leading or even fancy here (though an attempt was made at the latter with our SE model’s sporty wheels and blue interior trim), but the Corolla’s strengths lie mostly in its “friendly” simplicity and lack of glaring faults.

Many manufacturers seem to have forgotten the old rule of KISS (Keep It Simple, Stupid). We see that frequently when we get into a car and can’t immediately figure out how to do what should be easy operations, but the Corolla never stumped us. Not everything is as simple to DO as it could be (for instance, the climate system’s flippers for temperature, fan speed, and mode are not quite as convenient to use as good ol’ rotary knobs), but there’s usually no question about HOW to use them. The Entune audio system that’s part of the $1535 SE Premium Package is fairly easy to figure out — not always the case nowadays — and includes an Aux plug and CD player (increasingly rare). Missing, however, is Apple CarPlay/Android Auto, but both the radio and climate controls are easy to reach. We also appreciated that the parking brake is a conventional, easy-to-modulate hand lever (useful in the snow we got) rather than the newfangled electronic “either on or off” flipper, and the trip odometer can be reset with the simple press of a steering-wheel button.

Passenger room is adequate for four average-size adults and on par for the compact class, though some competitors might offer a bit more rear-seat space. Cabin storage is likewise about average, as are materials, though newer rivals often have padded door tops, which the Corolla does not. Few, however, can match the little Toyota’s all-around excellent visibility. 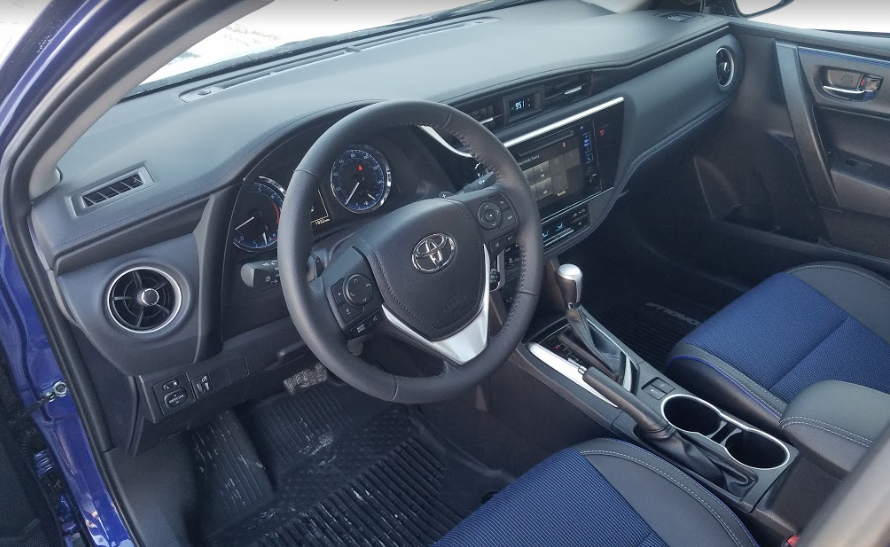 The SE’s sporty touches continue inside, with blue seat inserts and stitching. Controls are refreshingly simple to decipher.

While some rivals are going to small turbocharged engines in a quest for higher fuel-economy numbers, the Corolla sticks with a simple non-turbo 1.8-liter 4-cylinder engine, though it’s mated to a CVT automatic transmission rather than a more conventional 6-speed automatic. Still, the combination works well enough, providing a decent full-throttle jump off the line (not always the case with little turbo engines) and good kick-down response when passing (ditto), along with fuel economy that worked out to a pleasing 29.0 mpg in a mix of city/highway driving. Furthermore, the ride is quite compliant, the handling nimble if not quite sporting.

The trunk is wide at the rear and quite spacious, but the sickle-shaped hinges dip into the load area, the folded rear seat backs rest a few inches above the load floor, and the pass-through they reveal is a bit restricted. Rear-seat room is decent for average-size adults, but really tall ones may feel squeezed.

Value is another Corolla strong suit. Besides the usual expected features, notably standard even on the base L ($19,495 including $895 destination) is Toyota’s TSS-P (Toyota Safety Sense-P) suite of high-tech safety features that includes forward collision warning and mitigation with pedestrian detection, lane-departure warning and mitigation, adaptive cruise control, and automatic high beams. The SE adds such features as 17-inch alloy wheels and rear spoiler to the automatic climate control, 6.1-inch touchscreen, and heated mirrors found in the “step-up” LE ($19,930). In addition to the Entune audio system, the SE Premium Package on our tester adds keyless access and starting along with a power sunroof. Getting all that with a bottom-line sticker of less than $23,000 is — at least nowadays — quite the bargain.

If there are deficits to the Corolla, they’re subtle. Oddly, the sun visors don’t extend when swung to the side, leaving some of the side window uncovered. The engine groans a bit under hard acceleration, but that’s hardly unusual for the class. Folding the rear seat backs leaves them resting about five inches higher than the cargo floor (so long items can’t be easily slid forward), there’s no underfloor storage, and sickle-shaped hinges dip into the load area — again, much of that being the norm. But that’s about it.

Many of the Corolla’s chief competitors, such as the Chevrolet Cruze, Honda Civic, Hyundai Elantra, and Nissan Sentra, have been redesigned in the past couple of years, gaining swoopy styling and some new features. But the Corolla soldiers on, winning buyers over with its sensible layout, comparatively conservative lines, impressive list of standard features, and rock-solid reputation.

Compared to the sculptured sheetmetal offered by many newer rivals, the Corolla’s looks more subdued. However, Toyota has grafted on an aggressive-looking front end (see top photo), and the SE’s sporty touches add some pizzazz to a car that otherwise makes its mark on substance more than style.