Freaked by the Prospect of Driverless Cars? You’re not Alone 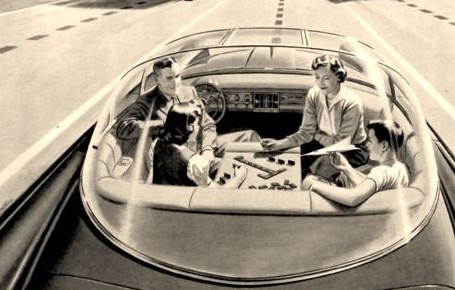 Why drive when you can play Scrabble? Seems we’re closing in on building viable driverless vehicles, but is the buying public ready to let computers do the driving?

The auto industry has thrust a great deal on the buying public in the last decade or so. After about a century of fairly predictable motoring progress, car builders rather suddenly began throwing once-unheard-of options at consumers.

Along with “regular” car and trucks, shoppers now have a phalanx of new options to consider. Dealerships are now populated with electric vehicles, hybrid vehicles–which you may or may not want to occasionally charge–not to mention the odd propane-powered pickup or what appears to be the beginning of a diesel renaissance.

But as unsettling as all these technological options may seem, they all pale in the face of what may be the industry’s next major leap: the driverless car.

Oft discussed this past year, the specter of autonomously acting automobiles has piqued the interest of futurists as well as commuters simply hoping they may someday be able to answer emails or just play Angry Birds for 90 minutes a day instead of pumping the brake pedal relentlessly in stop-and-go traffic.

Yet, despite the potential respite from the rigors of rush-hour travel, it seems that we, the driving public, are not yet ready to embrace automated car travel.

According to a Harris Interactive poll commissioned by Seapine Software, a provider of process-centric development tools, 88 percent of currently licensed drivers describe themselves as being “worried about riding in a driverless car.” Some other insight from the poll:

Women are slightly more worried about driverless-vehicle travel than are men (89 percent to 87 percent, respectively)

Drivers over 55 years of age are significantly more worried about driverless travel than drivers 34 years of age and younger (93 percent to 84 percent, respectively)

Reasons for concern include:

-Exposure of personal data including destinations and speed traveled (37 percent)

And, it’s worth noting, only 12 percent of respondents noted having no worries regarding travel in a driverless car.

Read ‘You’re Making Me Mad: Six Things Crummy Drivers Do That Mess Up My Commute’