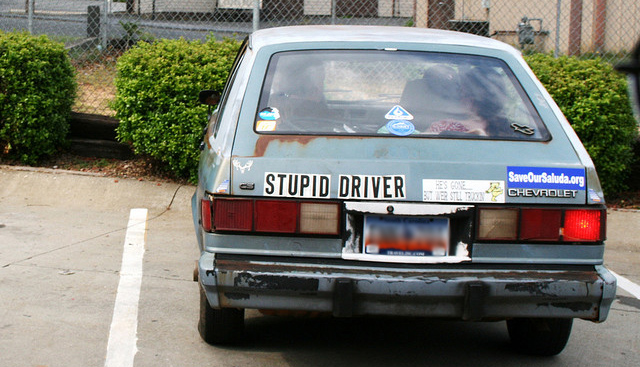 My commute sucks. It’s not actually a long commute distance-wise, clocking in at 20 to 24 miles depending on how I go. My commute is, however, laced with heavy traffic, lots of merging, and seemingly countless ill-sequenced red lights. On a good morning, I will make the trip in 45 minutes. On a bad day, you can add another half hour to that tally. And, God forbid if it snowed or rained.

I’m convinced that traffic conditions worsened with the proliferation of cell phones, and that things became exponentially nastier when smartphones were tossed into the mix. Still, I’m quite sure that the single factor that most affects my commuting time is the number of bad drivers on the road.

From what I see every weekday, I am certain that perfectly well-intentioned people believe that it’s a good idea to hold up a line of traffic to allow other vehicles to pass in front of them, that driving below the posted speed limit means being extra safe, and that turning left on a yellow light is somehow an overly aggressive act.

I am also convinced that 5 percent of all licensed drivers are hyper-aggressive psychopaths working through unmentionable personal issues while behind the wheel. To these drivers, anyone ahead of them in traffic is the enemy; anyone behind is fallen and conquered.

For the rest of us, I present here The Frustrated Commuters Creed. I ask that every decent driver take the pledge and help unclog the streets, highways, and byways of this gridlocked nation. Sure, if you’re onboard, you’re likely not part of the problem, but we can lead by example. Got an amendment to the Creed? Let’s hear it. But now, take the Frustrated Commuter’s Creed:

I. I fully understand and appreciate the principals of “Right of Way.” I know that if I come to a four-way stop first, I leave the intersection first. I also understand that the vehicle to my right has the Right of Way if we arrived there at the same time. I will never confuse matters for other drivers by forfeiting the Right of Way “just to be nice.”

II. I understand that any driver who allows me space to change lanes is doing me a favor. I will be careful not to cut into that driver’s lane too closely, and I will extend to that person a courtesy wave.

III. Further, I understand that changing lanes is a nuisance to other drivers. I am committed to doing so only when necessary. I realize that jockeying back and forth for nominal position gains makes me a nuisance (and, frankly, an idiot).

IV. When turning left at a busy intersection, I will pull fully into the intersection as I wait for my opportunity to turn. I realize that any indecision on my part may result in the car or cars behind me not being able to go, and having to wait through another red-light cycle.

V. I will be careful not to block driveways and parking lot exits when waiting in queue for a light to change. Additionally, I will extend to drivers who have made similar provisions for me a courtesy wave.

VI. I will never slow down on a highway on ramp because I lack the cojones to nail the throttle and merge. I will match the speed of traffic and integrate into the flow of cars as seamlessly as possible.

VIII. I understand that if I take any action that results in another driver needing to apply the brakes, I have screwed up.

IX. I understand that anyone who passes on the shoulder or attempts to shoot straight from a turning lane is an idiot. I know deep inside that someday God, fate, or karma will exact a toll from such morons, and that I need not need to seek revenge myself.

X. Finally, I understand that everyone on the road has someplace to be. I will do what I can to maintain the organic flow of traffic and avoid being a burden to other drivers. I realize that the greatest crime of commuting is to give up on making good time and to give in to checking my messages and responding to emails. My goal is to remove my car from rush-hour traffic as quickly and safely as possible.

Stop It! 5 Habits to Break for Better Mileage