Hail the Pine Tree! A Tribute to the Most Common Auto Air Fresheners

Is one of these hanging in your car?

I last pumped gas for pay sometime in 1985. It was then that I last peeked into another person’s car using a windshield squeegee as cover for my furtive voyeurism. You can learn a lot about a person while nosing around their car. I’m pretty sure most folks pulling up to full-serve weren’t thinking about what conclusions were being drawn about them while they filled up. But us pump jockeys, we noticed stuff.

We saw what you read, what you drank, and we even heard what you listened to on the radio. We also noticed what was hanging from your rearview mirror. I’d say that about 40 percent of cars then had something hanging there, and in most cases it was an air freshener of some sort dangling in the way of what should have been a clear shot of the road.

I present here the four most common air fresheners seen in the mid-1980s. Sadly, a fifth freshener, the classic Brut 33, is no longer available and an image of it is elusive. Perhaps another time. . . . 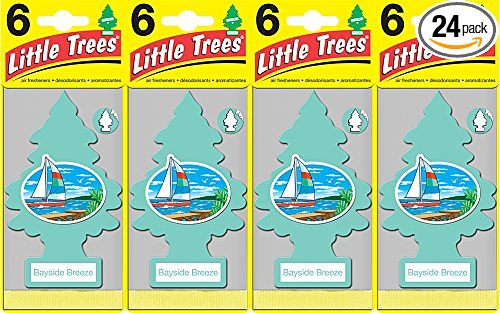 Buy your pine tree air fresheners in bulk and save.

Still in use and still wildly popular, the pine tree air freshener is a cultural icon unto itself. Made additionally popular by its co-starring role in the classic film Repo Man, the pine tree today is employed for use by two distinct groups of consumers. First, there’s the ironic hipster type looking to make a wry cultural statement. These folks simply unwrap the tree and hang it in their car. There’s also a group of users who actually read the instructions and remove the package slowly over time, ensuring long-term car-cabin freshness. These people probably actually have stinky cars.

The Cherries
Most commonly seen today in: minivans, two-generation-old Ford Explorers
There are countless variations and rip-offs on the cherry thing, but most of them bear some resemblance to the berries seen on classic slot machines. I actually have no idea what these ubiquitous fresheners smell like, but I assume it’s usually cherries. I am at a loss to explain the popularity of the cherry air freshener, and can only assume its appeal is based on looking innocuous and not being pine scented.

The Playboy
Most commonly seen today in: Pontiac Grand Ams, 25-year-old Mustangs
Nothing announces your sporty intentions to lady passengers quite like licensed Playboy gear. At one point in time, many years ago, the scent of these fresheners was listed on the package as “distinctly different.” Turned out that they smelled like cheap perfume had it been sprayed on cardboard and wrapped in plastic for six months. The simple white bunny on a black field seems to have vanished, but classy gents with an eye for the ladies still have a number of Hefner-approved options from which to choose.

The Marijuana Leaf
Most commonly seen today in: the cars of idiots
A spiritual successor to the roach clip, this odd tribute to impaired driving appears to be nothing more than an attempt to provoke law-enforcement professionals who may be cruising alongside you in traffic. I saw only a couple of these back in the day, but even then I wondered what the hell the driver was thinking. A contemporary update of this ill-conceived automotive accessory might be the Ambien-and-a-martini freshener.