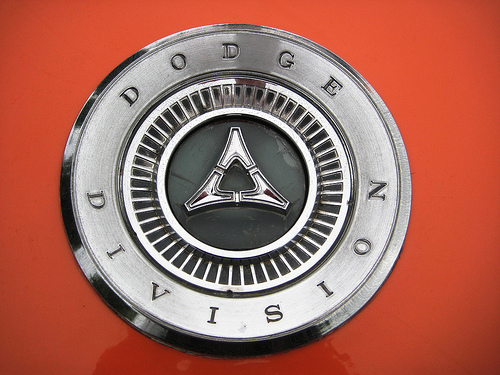 Hey, Dodge, you brought back the Dart; why not resurrect the fratzog logo?

Where does the time go? Chrysler Group emerged from bankruptcy (along with General Motors) only three short years ago, yet so much good stuff has happened since. Terrific new products like the latest Jeep Grand Cherokee and 2013 Dodge Dart. Impressively improved products like the remade Chrysler 300 and Dodge Charger. Fit-and-finish transformed from crummy to competitive. Nearly three years of rising monthly sales.

Of course, the good folks in Auburn Hills, Michigan, have had a little help from Fiat and a certain Mr. Marchionne, but everyone involved has clearly been busting tail to redeem this automaker in the eyes of the U.S. taxpayers who kept it afloat. Yes, they still have much to do, but they also have every reason to be proud of what they’ve done so far. We’re sure they’re happy about the results. So am I.

Badge Magic: How The Chevy 307 Turned Me Into a Car Geek

But, I have two respectful suggestions for design chief Ralph Gilles and his staff, as well as Chrysler marketers. First, it’s time your cars moved on from the “gangsta” look that’s been around since the 2005 300. I don’t know about anyone else, but I am sooo over that. Blocky styling may be fine for big trucks and SUVs, even necessary for visual cred, but a car should look formed, elegant, and nothing like the competition. I find it telling that none of your rivals has gone slabby-boxy, unless you count the current Ford Taurus.

In short, I think your cars need a new design theme, something daring and dynamic, cool yet practical, the kind of styling that makes people say, “I’ve got to have that.” Something like your “cab forward” cars of the 1990s and early 2000s, such as the Chrysler Concorde and Dodge Intrepid, which gave Chrysler some of its best sales years ever. Sure, that very success led to an ill-starred “merger” with a certain German automaker, but forget that. In my view, cab forward remains as relevant now as it was 20 years ago, and you should bring it back for your next-generation cars.

Why do I say this? Because a lot of cab-forward cars are still running around here in Phoenix, and regardless of their condition I most always notice them, admiring how distinctive—how futuristic—they look compared to far newer designs. And since the 2013 Dart seems to have a little cab forward in it, maybe you feel the same way.

Now I’m not recommending a literal return to 1990s aero jellybeans, but rather suggesting a reinvented cab-forward style. Keep the wedgy profile, wheels-at-corners stance, and short-ends/long-wheelbase proportions, but add creaselines, bulges, and hollows to achieve a modern, muscular look. Give it some “shoulder,” too. Hey, if a mere automotive journalist can imagine this, you pros should be able to make it spectacular.

My other suggestion concerns Dodge cars and crossovers. Now that they’ve lost the traditional ram’s head symbol to your separate truck brand—a dumb move, by the way—they have only “D-O-D-G-E” and a dull “crosshair” graphic as brand identifiers. But Dodge still needs its own memorable logo, in my humble opinion. Fortunately, you’ve got a dandy one that I think could be effectively dusted off, just as you’ve done with the name Dart. By coincidence, it too harks from the early 1960s. It was nicknamed the “fratzog” by those who devised it in the old Highland Park design studios: three “boomerangs” arranged to form a triangle around a circular void. Like cab forward, it’s simple and elegant and still looks modern, at least to these eyes.

OK, I can understand that you’d be reluctant to use either of these suggestions for fear of being accused of easy-way-out retroism. But hey, you’ve been mining heritage with Hemi V8s and now the Dart, so what’s the difference? Besides, the past can inform the future as much as it does the present.

So please give all of this some thought. And don’t worry if you end up using these ideas. I promise not to tell anyone where you got them.