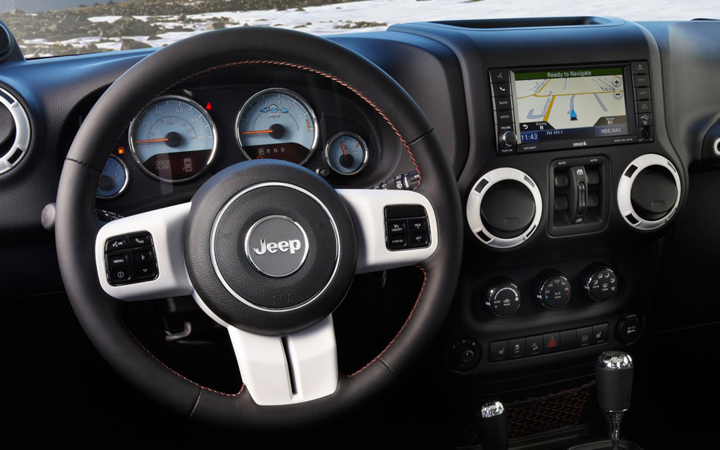 In the name of General Patton, what the heck is a nav system doing in the Jeep Wrangler?

If you drive enough cars, you’ll encounter your fair share of weird stuff. Overwrought control systems designed by a masochist, inconvenient storage areas suited to a contortionist, costly options that would impress an extortionist, bedeviling colors in dire need of an exorcist; sooner or later, you’ll experience all of them—and more.

Following is a short list of, um, “curiosities” that I’ve encountered in cars in recent months. A word of explanation first: This is not a dumb-options-on-which-you-should-never-waste-a-dime piece. Indeed, the features mentioned (two out of three of them at least) are quite useful in the right vehicles. Here, though, they raise an eyebrow.

Synthetic-suede package shelf in the BWM 650i Gran Coupe
A number of high-end vehicles offer cushy, rich-looking headliners, seating surfaces, steering wheel rims, etc., in this material. But the bucks-up M Sport and Individual Composition option packages for the Gran Coupe extend the plush stuff beyond the ceiling, where at least it can be easily seen and appreciated, to the ledge under the backlight, where it can’t. Is that the height of luxury—or the height of excess?

Carpeted rear floor mats in the Scion IQ
With the front seat far enough back for even a modestly tall driver, there is no—as in none whatsoever—legroom for a rear-seat passenger and only enough space behind the passenger seat for the most petite (and tolerant) third occupant. Why, then, spend $55 for floor mats? Face it: No one may ever sit in the back seat of most IQs, so no one may ever leave a muddy footprint on the carpet back there—and anybody who is forced into that tiny nook deserves the chance to get even by mucking up the floor.

Navigation system in the Jeep Wrangler
This just seems like cheating. Judging by the adventuresome, self-reliant image portrayed in the brand’s advertising, shouldn’t the people who buy Wranglers be the kind of folks who can use a sextant to navigate by the stars and follow elk droppings back to a source of fresh water?